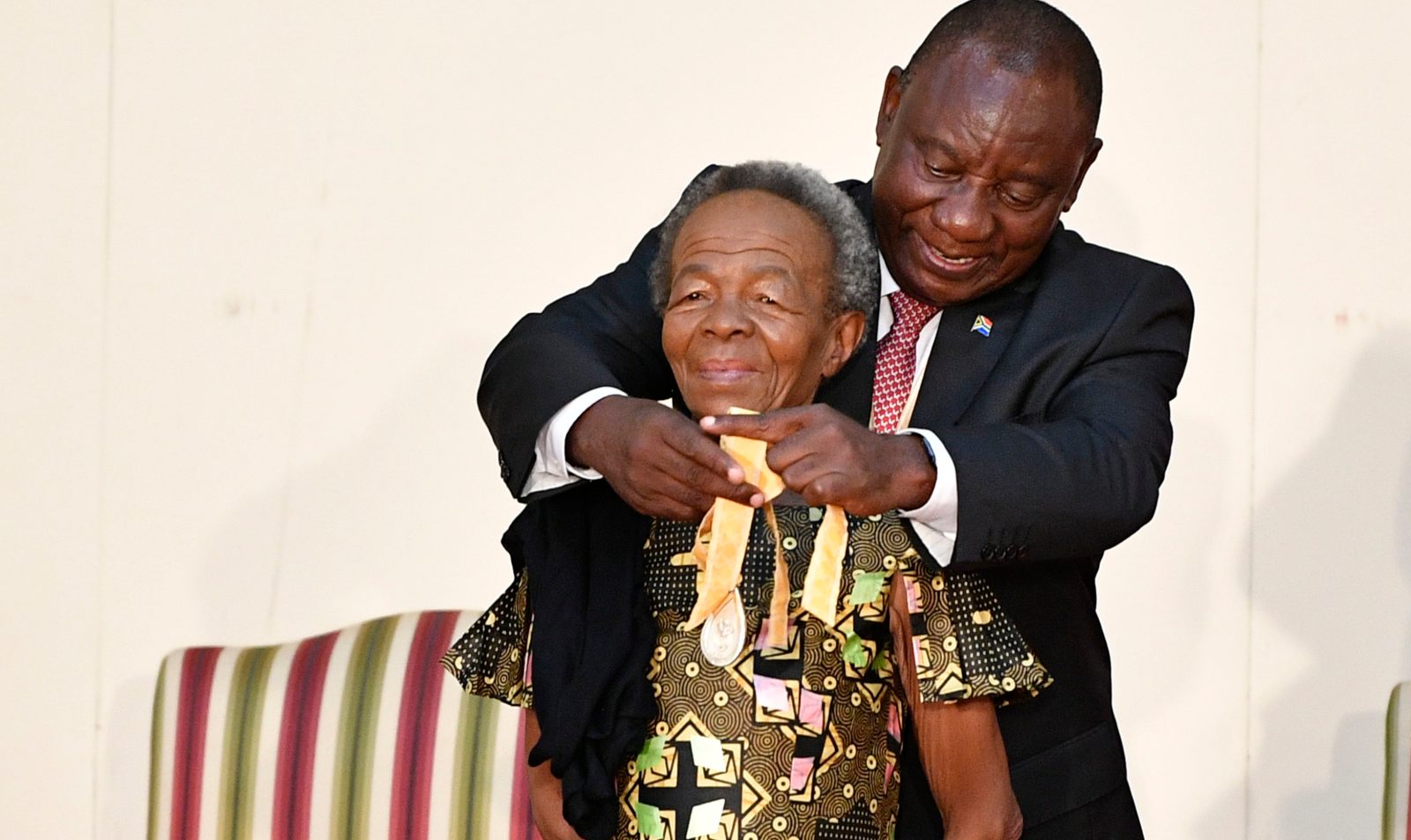 The Order of Ikhamanga in Silver is bestowed to actress Mary Twala by President Cyril Ramaphosa during the 2019 National Orders Awards on April 25, 2019 in Pretoria, South Africa. (Photo by Gallo Images/Frennie Shivambu)

President Cyril Ramaphosa on Thursday, 25 April 2019, bestowed the 2019 National Orders Awards on distinguished local citizens and eminent foreign nationals who have played a momentous role towards building a free and peaceful democratic South Africa, as well as improving the lives of South Africans in various ways.

There were 30 recipients in total, with three of those receiving gold awards.

Former president of Madagascar, Didier Ratsiraka received the gold award under Order of the Companions of OR Tambo for his outstanding contribution to the struggle for democracy in South Africa.

Johaar Mosaval received the gold in the Order of Ikhamanga for his exceptional contribution to the performing arts, particularly ballet dancing, which saw him become the first black South African to become a senior principal dancer at the Royal Ballet.

The late former Premier of the North West and Minister of Environmental Affairs, Edna Molewa also received a gold award, under the Order of Mapungubwe, for her exceptional contribution to the fight to save our planet by immersing herself in the global efforts to mitigate the effects of climate change.

Another notable recipient of the silver Baobab was William Smith, popularly known for his science and mathematics show.

The president also took an opportunity to acknowledge the “courage and selflessness” of nine-year-old Thapelo Tambeni from Soshanguve, who lost his life while trying to save his friend from drowning in a water-filled construction trench in 2018. He managed to pull his friend away from danger but lost his own life.

His father received the Order of Mendi for Bravery on his behalf.

The National Orders are the highest awards that South Africa bestows, through the president, upon citizens and members of the international community who have contributed meaningfully towards making the country a free democratic and successful nation, united in its diversity.

The congregation of distinguished guests, including cabinet ministers, and various dignitaries gathered at Sefako Makgatho Presidential Guest House, as Minister of Arts and Culture, Nathi Mthethwa temporarily donned the hat of programme director.

Ramaphosa, addressing those in attendance, said “although they are conferred by the president, the recipients are nominated by members of the public. These Orders celebrate individuals who have excelled; whose actions and works represent the triumph of the human spirit. They are men and women driven by purpose and service”.

Ramaphosa told all the recipients that “today your country has honoured you, but it is an honour that should inspire you to set even greater goals, driven by a commitment to lifelong learning and to a constant betterment of the self”. DM