Businesswoman Bridgette Radebe’s movement into Botswana has been curtailed after reports that she tried to interfere in the governing party’s leadership elections. It’s a massive loss for her, and an even bigger embarrassment for President Cyril Ramaphosa’s administration.

In Botswana’s Government Gazette, the minister of nationality, immigration and gender affairs, Magang Ngaka Ngaka, published a special notice with a declaration that two South Africans, Dikeledi Dijeng Bridgette Radebe and her associate, the Sandton businessman known as Malcolm X, will in future have to apply for visas to enter Botswana.

Most South Africans, with the exception of some EFF members, including leader Julius Malema, can cross the borders to their northern neighbour visa-free. Malema’s visa restrictions were imposed after he declared in 2011 – when he was still ANC Youth League leader – that he would work with organisations within Botswana to effect a change of government during the country’s elections. Malema subsequently applied for a visa to enter Botswana, but it was refused.

The Government Gazette was published on Wednesday, a day before President Cyril Ramaphosa sent International Relations Minister Lindiwe Sisulu to smooth relations with Botswana’s President Mokgweetsi Masisi. Copies of the notice, however, only surfaced in public after the Easter long weekend. 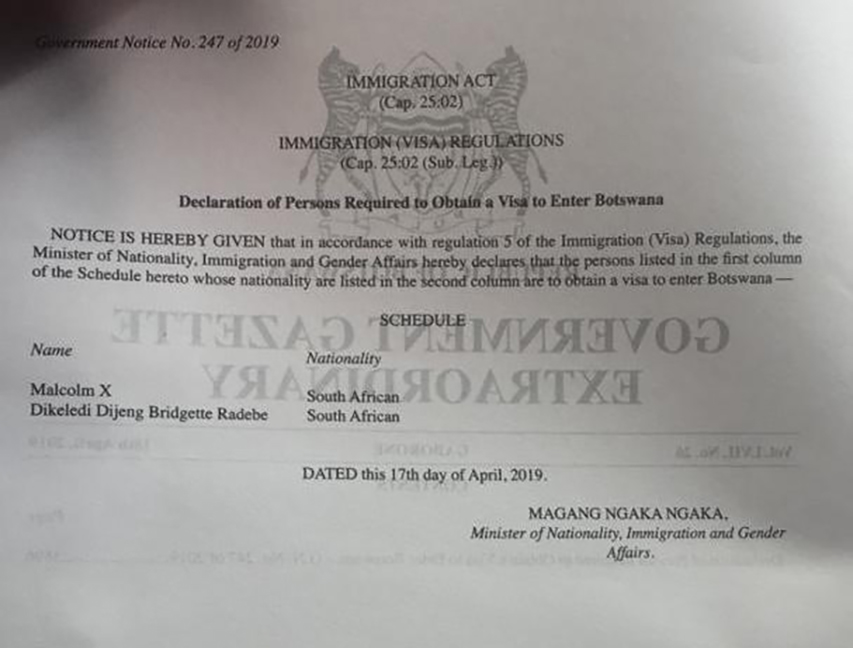 Ramaphosa would, however, likely have known about the travel restrictions against Radebe by the time he sent Sisulu to make good. Radebe is his sister-in-law (Ramaphosa is married to Tshepo Motsepe, Radebe’s sister) and even though it appears that he didn’t approve of what she was doing (it’s very much against the ANC’s policy to interfere in the politics of a sovereign country with which it is on good terms), her proximity to the top could have created the impression that Radebe had his blessing.

The restriction is a low blow for Radebe, who has told Daily Maverick that the reports about her contributing money to the campaign of foreign minister Pelonomi Venson-Moitoi, who was challenging Masisi for the presidency, were exaggerated. She admitted to being friends with Venson-Moitoi, but denied that she or her money were involved in Venson-Moitoi’s campaign ahead of the Botswana Democratic Party’s elective conference in Kang, earlier in April.

Radebe also told Daily Maverick she studied in Botswana – which is where she became friends with Venson-Moitoi – and she has mining interests there in the form of Mmakau Mining. She was also exploring further business opportunities with Avante Security Services, she said, before authorities in Botswana became suspicious about large sums paid from Mmakau Mining to Avante.

Avante’s accounts were frozen on suspicion that Radebe was laundering money for Venson-Moitoi’s campaign. Another of Venson-Moitoi’s high-profile backers was former president Ian Khama, who is reportedly trying to get his grip back on the country’s controls.

There is a reasonable chance that Radebe will not be banned forever. Unlike Malema, who was open and unrepentant about his call for regime change, Radebe has denied that regime change was what she aimed to do.

Over the Easter weekend, however, she appears to have gone to ground, not responding to questions and with her spokesperson referring queries to the South African government.

Ramaphosa’s office referred queries to the department of international relations, which in turn said it had nothing to say.

Sisulu’s unscheduled visit to Gaborone last week, as well as the visa restrictions against Radebe, indicate that this was no minor row. DM