Will a second Arab Spring – broadened to Africa – wither like the first? 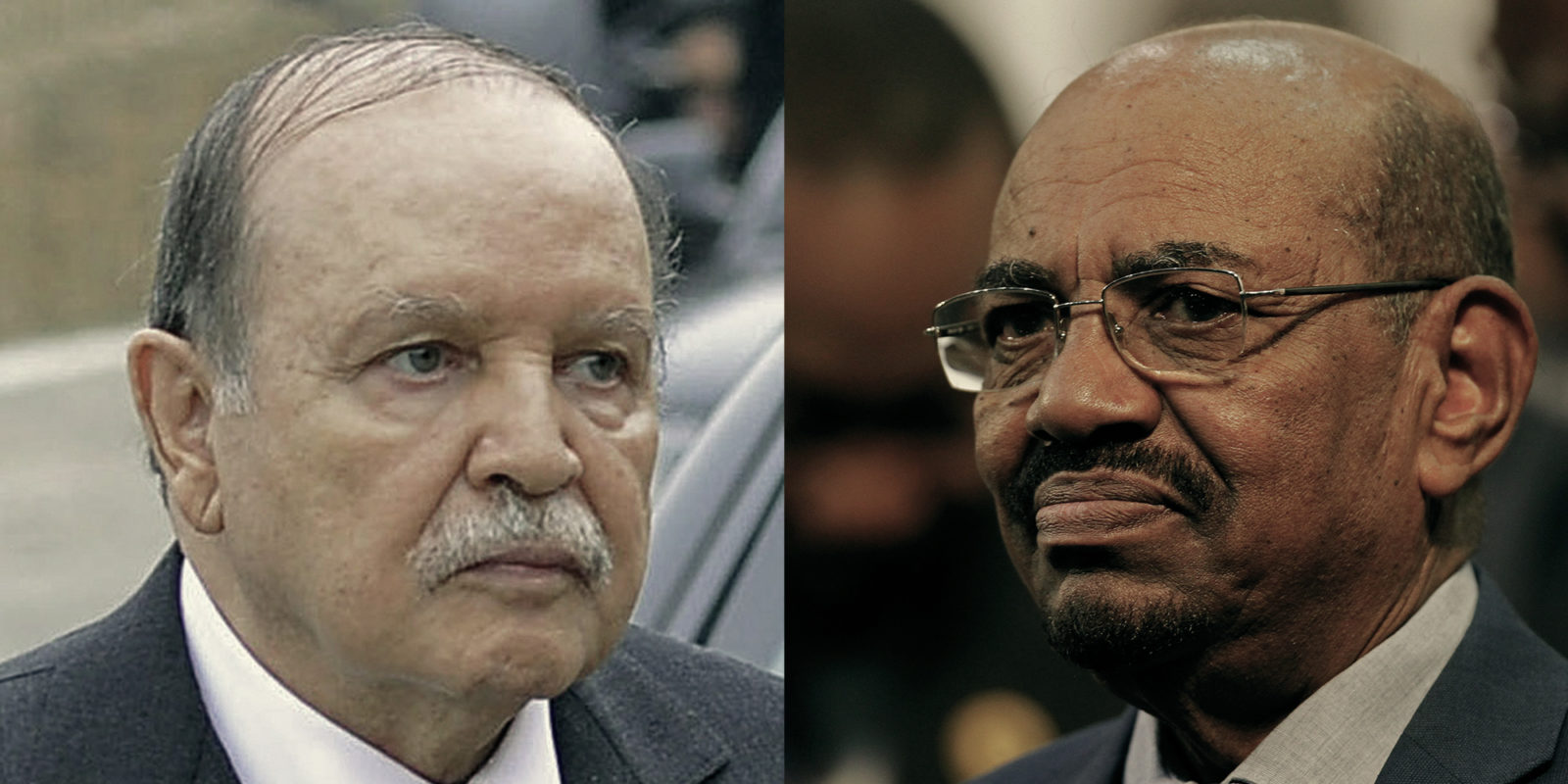 The astonishing demonstration of peaceful, popular, political power which toppled both Algeria’s Abdelaziz Bouteflika and Sudan’s Omar al-Bashir within a matter of days has raised the spirits and the hopes of democrats elsewhere across the region.

Is this a second Arab – and perhaps also more widely African – Spring we are seeing? And if so, will it end better than the bitter winter rather than glorious summer which succeeded the first one in 2011?

It does indeed seem to be another Spring, judging by the many similarities with the first. And in some ways it also appears to be more promising – although it’s still too early to say for sure that democracy will eventually prevail in Algeria and Sudan, let alone elsewhere.

One of the similarities between 2011 and 2019 is that the ordinary citizens filling the streets and peacefully demanding democracy in both countries seem to have drawn inspiration from each other.

The two Springs share four main characteristics; being nationwide, sustained over time, political in nature, and interconnected, according to George Fahmi, a research fellow at the Middle East Directions Programme of the Robert Schuman Centre for Advanced Studies, at the European University Institute in Fiesole, Italy.

Writing for London’s Chatham House, he described the mass Sudanese street demonstrations, which began in December 2018 as protests against a steep increase in the bread price were beginning to flag and then drew strength from the perhaps even larger demonstrations against Bouteflika which began in Algeria in February.

Yet both transitions, though hopeful, also remain rather precariously poised.

In Algeria, the “street” first forced Bouteflika – 82 years old and largely incapacitated by a stroke – to abandon his plans to run for a fifth term which could have extended his time in office to 25 years.

Bouteflika announced the withdrawal of his candidacy and the indefinite postponement of elections. The street rejected that option and continued to fill the streets until Bouteflika resigned on 2 April.

He was replaced, as the constitution required, by the Speaker of the Senate, Abdelkader Bensalah, which didn’t please the protesters either as he was considered too close to Bouteflika and the deep state, the “pouvoir” (power) which is believed to be running the state from the shadows.

Bensalah intends to manage the transition until new presidential elections are held on 9 July but it’s not clear if the protesters will wait that long.

In Sudan, similarly, the protesters have maintained unrelenting pressure on the authorities, first forcing the military to oust and arrest Bashir on April 11, then a day later forcing his interim replacement Defence Minister General Awad ibn Auf also to resign, along with the detested and feared intelligence chief Salah Gosh

General Abdel-Fattah Burhan, Auf’s replacement as head of the transitional military council, is better liked by the protesters. He has announced the restructuring of state institutions, the end of a night curfew and the release of political prisoners.

Ironically, so is the African Union, which had largely sat silently on the sidelines as the popular pressure built up on Bashir. Then it denounced the toppling of Bashir as a military coup – and therefore an “unconstitutional change of government” contrary to the AU rules. So, in the end, the AU and the Sudan “street” seem to have ended up on the same page of the hymn book.

All this means that where and how both the Algerian and Sudanese transitions go from here remains uncertain.

If we look back on the first Arab Spring, the only real success was where it started, Tunisia. Despite some rocky patches, it has stayed on the democratic path. The greatest failures have been Libya and Syria where popular uprisings were violently opposed. In Libya that led to foreign military intervention, the toppling and death of the country’s dictator Muammar Gaddafi, and eight years of civil war. Even now the maverick general Khalifa Haftar is fighting the internationally recognised government of Fayez al-Sarraj on the outskirts of Tripoli.

In Syria, President Bashar al-Assad, thanks in part to foreign support, particularly from Russia and Iran, remains in charge though the civil war continues.

Such a bloody and chaotic outcome cannot be completely ruled out in Algeria and Sudan. However, Egypt is perhaps the precedent which the Algerian and Sudanese protesters need most carefully to guard against. There the huge gatherings on Cairo’s Tahrir Square eventually forced long-time authoritarian leader Hosni Mubarak to resign in February 2011. As in Algeria and Sudan, the military, widely believed to have been pulling Mubarak’s strings, was believed to have pulled the plug on him when it realised he was no longer a viable frontman.

Under continuing pressure, the military did eventually allow democratic elections, but when the Muslim Brotherhood’s Mohamed Morsi won those, it didn’t take long for the military to step back in, removing him in a coup, though portrayed by the generals as another popular uprising.

The then defence chief behind Morsi’s ousting, General Abdel Fatah el-Sisi, swapped his uniform for a business suit and won civilian elections the next year. Ever since then, though, he has been tightening his grip on power with ever more repressive measures. Egypt has in effect turned full circle to the Mubarak era.

Closer to home, we have another example of the ambiguous role of the military in ousting an ageing autocrat. In November 2017 armoured military vehicles surrounded President Robert Mugabe’s residence in Harare, after he had sacked his deputy Emmerson Mnangagwa.

After days of stand-off Mugabe eventually “resigned”. Did he jump or was he pushed? The heavy presence of armoured vehicles suggested the latter, though Mnangagwa, who eventually legitimised his takeover in elections the following July, denied it had been a military coup. Yet many observers will believe the military still runs the country from the wings.

That was much more clearly so in Egypt, Algeria and Sudan. And so it’s still not clear if the Algerian and Sudanese militaries, the ultimate arbiters of power, will really surrender control completely, or rather just manoeuvre as adroitly as they can around the protests, conceding just enough power, or the semblance of power, not to lose their grip.

In that question lies the possibility of the confrontation with the street protesters turning really ugly and violent.

Assessing the prospects of a second Arab Spring, Fahmi worries that this one enjoys less international support than the first one in 2011. This is mainly due to the bad outcomes of international interventions in the first one, particularly in Libya and Syria, which has made Western governments in particular wary of further entanglements.

Fahmi also notes that since 2011 right-wing parties have gained power in several Western countries and are even more isolationist and reluctant to intervene. He believes this has given the regimes in both Algeria and Sudan more room to manoeuvre – though, as we have also seen, the protesters are keeping up the pressure.

On the plus side, he believes the 2019 protesters have the advantage of having learned from the mistakes of the 2011 generation. Ironically, one of those mistakes precisely may have been international intervention, though this was not always under the control of the local democratic activists.

Isma’il Kushkush, writing in the Atlantic, has listed some other lessons which the 2019 street has learned from its 2011 predecessors. These include a broader appeal, an example being the Sudanese Professionals Association which has emerged to widen and articulate the protests in that country. The significant presence of women in the Sudanese protests has also given them greater immunity to violent repression.

He also, critically, says the current protesters both in Algeria and Sudan have learnt not to trust the promises of the military, hence the sustained pressure on them to relinquish power to civilians.

And they have also learned to be extremely disciplined about remaining peaceful, to avoid giving the security forces any pretext for a crackdown.

Whether that is enough, though, remains to be seen.

Beyond Algeria, Sudan and Zimbabwe, of course, lie many other Arab and African countries yearning for Spring. They are run by leaders who have long overstayed their welcomes and whom their people would love to see gone. Cameroon’s Paul Biya, in office for 42 years, Equatorial Guinea’s Teodoro Obiang Nguema, 38 years, Uganda’s Yoweri Museveni, 33 years, Chad’s Idriss Deby, 27 years, Republic of Congo’s Denis Sassou-Nguesso, a total of 35 years, though interrupted by five years in opposition; the list goes on.

Some other African leaders seem to be aspirant presidents-for-life, like Rwanda’s Paul Kagame, officially in office since 2000, though he was the real power behind the throne since 1994. He has already altered the constitution once to extend his term of office and seems likely to continue doing so.

Burundi’s Pierre Nkurunziza ran for an illegitimate third term in 2015, on spurious grounds. Many of his countrymen suspect he will find another dodgy ruse to cling to power when his third term expires in 2020.

The prospects for the second Arab/African Spring sweeping away any of these dinosaurs and would-be dinosaurs is uncertain. Ultimately, as Algeria, Sudan and Zimbabwe all have demonstrated, it probably depends on the disposition of the military and the other security forces.

Would they crack down brutally on mass protests if these erupted? Or would they decide their figureheads in each case have become an embarrassment and liability and dump them in favour of someone else?

And would they then eventually really relinquish power in favour of democratic civilian government? Rather unpredictable, unless one knows the inner thinking of each security establishment concerned and its real relationship with the civilian president.

Yet the broader climate, the Spring which is blossoming in Algeria, Sudan and perhaps incipiently already elsewhere, must surely be one of the factors that shape those calculations too. DM