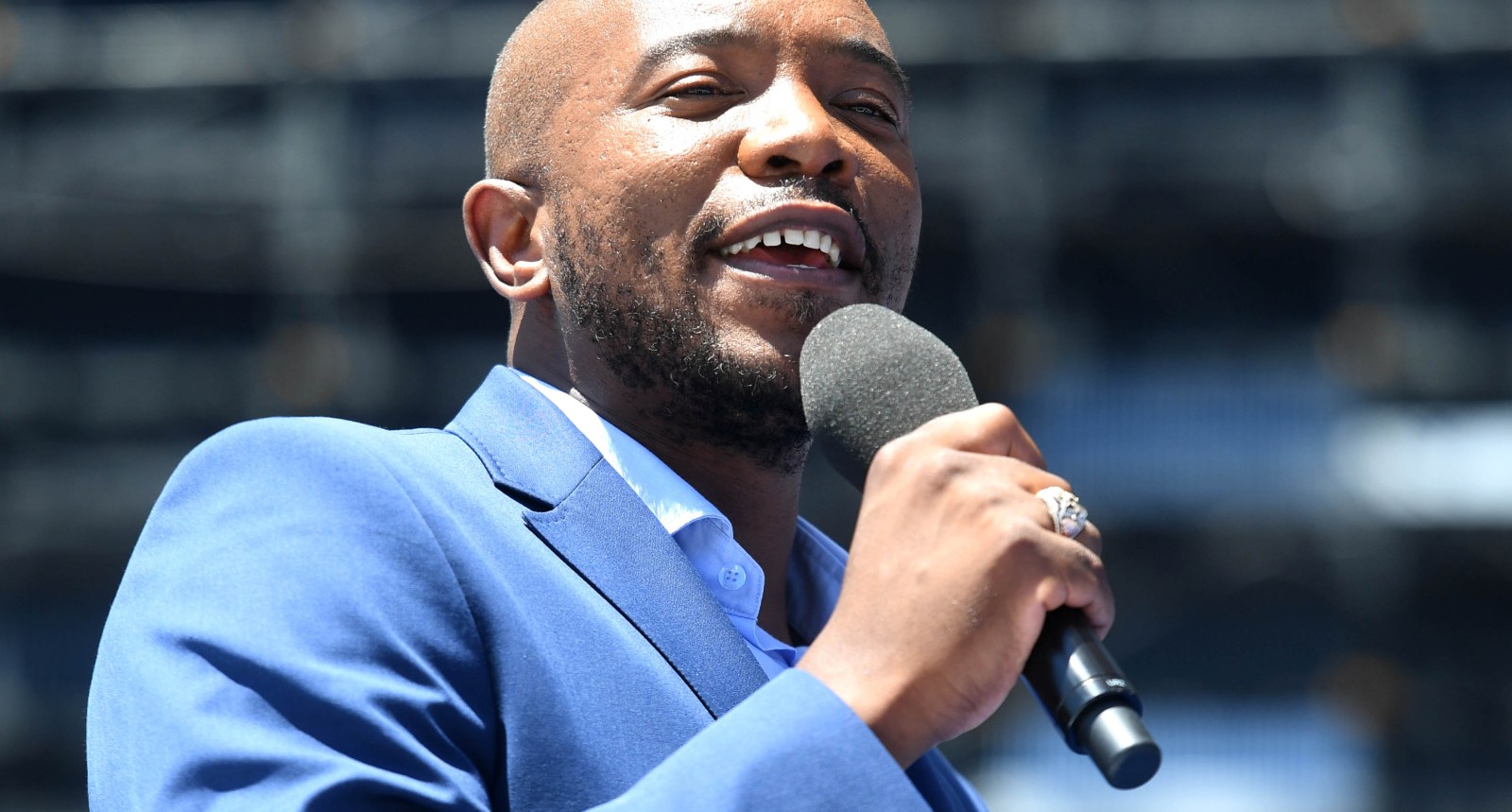 Mmusi Maimane during the Democratic Alliance (DA) manifesto launch at the Rand Stadium on February 23, 2019 in Johannesburg, South Africa. The DA launched its manifesto ahead of the 2019 national elections set to take place on May 08, 2019. (Photo by Gallo Images / Netwerk24 / Deaan Vivier)

Think-tank Good Governance Africa’s annual Government Performance Index has just been released — and the results are far more flattering to the DA than the ANC. The report ranks South Africa’s 213 municipalities in terms of administration, economic development and service delivery. Of the top 20 best performing municipalities, 15 are run by the DA either alone or in a coalition.

Good Governance Africa’s 2019 ranking of municipal performance will come as a pre-election gift to the DA. 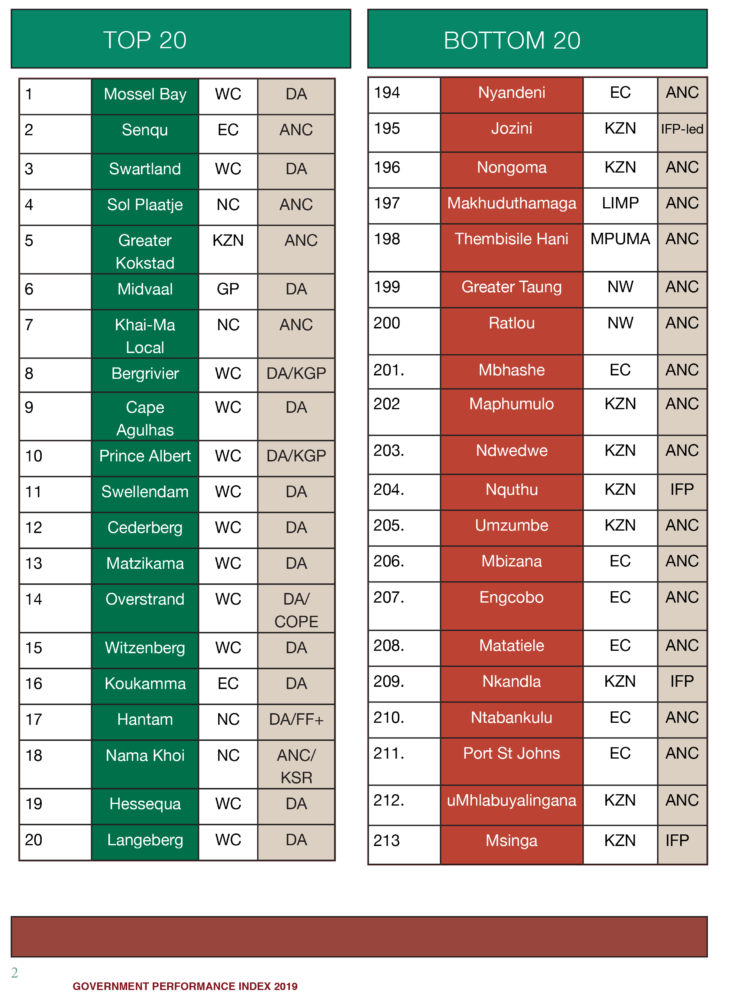 This is the third year in which Good Governance Africa (GGA) has produced its analysis of South African municipalities. It looks at three areas: The quality of administration, economic development, and service delivery. To reach its findings, the think-tank uses data from Statistics South Africa, the Auditor-General’s reports, municipal information and National Treasury.

When analysing municipal administration, GGA looks at “whether there are sufficient numbers of personnel with the requisite qualifications”, financial management and compliance with annual reporting to Treasury.

Under the category of economic development, GGA considers “the attractiveness of the municipality for economic opportunities, investments and habitation”. In assessing service delivery, it looks at whether municipalities are succeeding in providing water, sanitation, education, electricity, housing, refuse removal, health facilities and police coverage to their residents.

Overall, the top-performing municipality nationally is the Western Cape’s Mossel Bay, which is governed by the DA.

DA-run municipalities in the Western Cape dominate the top 20, with the province taking 12 spots. The second best-performing province is the Northern Cape. Of concern to Gauteng residents will be the fact that the province has only one municipality in top 20: The DA-run Midvaal, which ranks sixth overall.

GGA notes that 2019 is the first year in which municipalities from KwaZulu-Natal and the Eastern Cape feature in the top 20, in the form of the DA-led Koukamma and the high-performing ANC municipality of Greater Kokstad in KwaZulu-Natal.

Residents of the Eastern Cape and KwaZulu-Natal are short-changed in terms of municipal performance, with the rural municipality of Msinga in KwaZulu-Natal ranked the country’s worst. Msinga also has the highest unemployment rate in the country.

All the worst-performing municipalities are shared between two parties, with the IFP taking three and the ANC making up the remaining 17.

The KwaZulu-Natal municipality made famous by former president Jacob Zuma, the IFP-governed Nkandla, ranks just five places from the bottom.

While coalition governance in South Africa has taken some flak in the past few years, largely as a result of very public blow-outs such as that between the DA and the UDM in Nelson Mandela Bay, the Government Performance Index reveals that the results of coalitions are not always negative.

In general, the GGA found that municipalities governed by coalitions performed better than average, writing:

“The highest concentration of hung municipalities range between the top 40-100”.

Other findings were more expected: That municipalities with larger working-age populations tend to do better than those with a larger population under the age of 15, for instance.

When it comes to service delivery, “the data suggests that the most common challenges faced by the bottom 20 municipalities are giving people access to piped water, sufficient sanitation and electricity”.

The service delivery rates for the poorest-performing municipalities are shockingly low.

As always, the picture that emerges from the Government Performance Index is one of the vastly different realities for people living within the same country. In the Western Cape’s Prince Albert municipality, 95.6% of residents have access to sanitation and 95.4% to weekly refuse removal.

The GGA is quick to note that “many other important factors” play a role in municipal performance beyond the metrics it employs in drawing up its annual assessment.

It is worth noting, for instance, that all the bottom-performing municipalities have tended to be in former homelands.

This is a significant factor: As Fort Hare Professor Michael Aliber wrote in a 2017 paper, the “long-term, deliberate neglect” of the homelands by the apartheid government “has left a durable legacy of poverty and stagnation”.

The Western Cape had no homeland areas with which to contend after 1994, which is a factor sometimes neglected in assessing the province’s comparatively successful governance.

On the other hand, Gauteng did not have a significant area allocated to homelands — yet just one of its municipalities has made it into the top 20 of this year’s Government Performance Index. DM

Good Governance Africa’s 2019 Government Performance Index will be formally launched at 9am on Wednesday 17 April.

Correction: A previous version of the table in this article incorrectly reflected Kokstad as being run by the IFP. In fact, it’s run by the ANC. Apologies for the error.