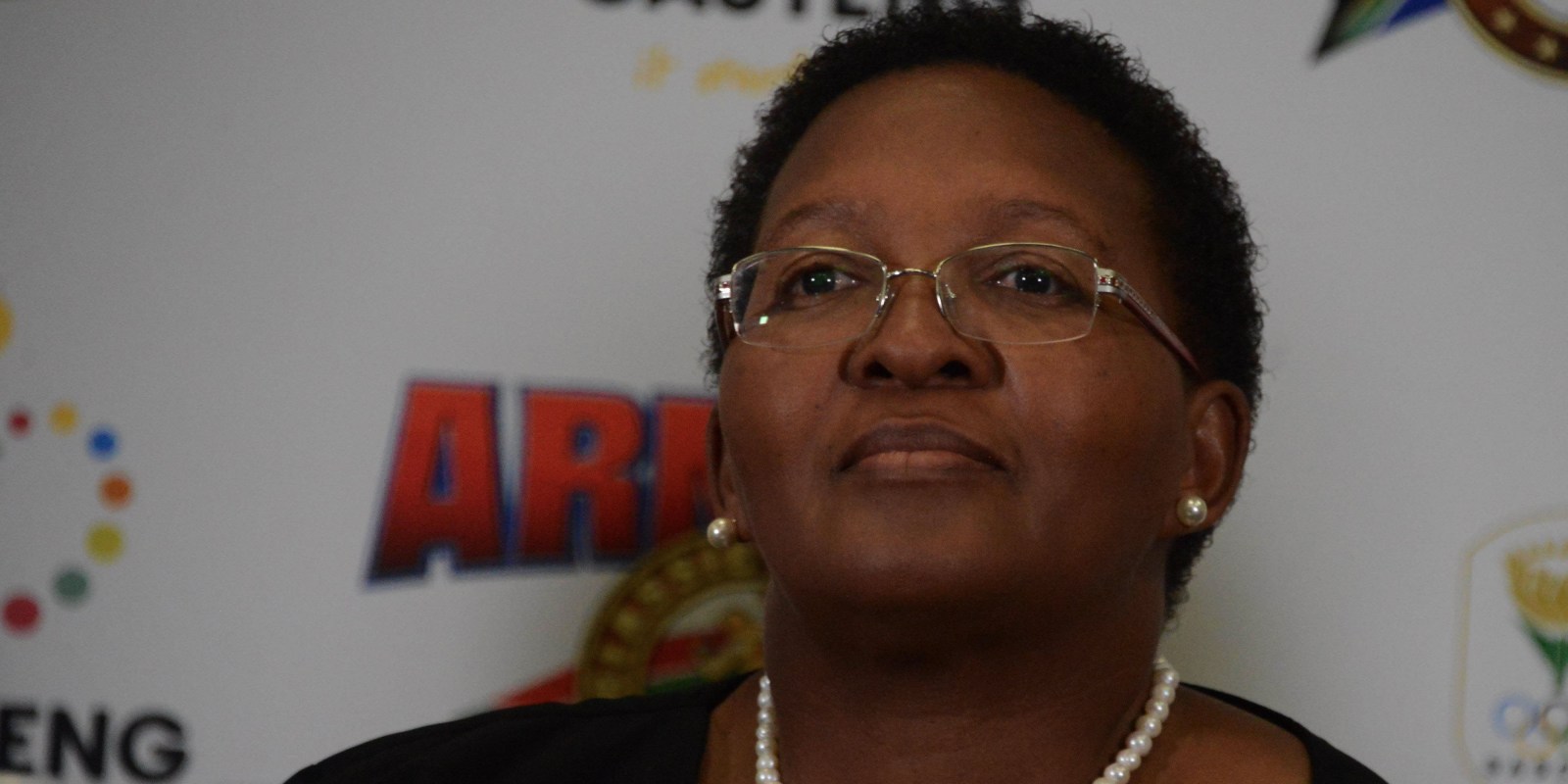 Faith Mazibuko during the Arnold Classic Africa 2017 press conference on May 05, 2017 in Sandton, South Africa. The Arnold Classic Africa is the biggest multi-sport event on the Africa continent, now one of 6 events happening worldwide. The event will take place at the Sandton Convention Centre on 5 – 7 May 2017 (Photo by Gallo Images / Frennie Shivambu)

Gauteng MEC for Sport and Recreation Faith Mazibuko appeared before the South African Human Rights Commission on Tuesday and apologised for her controversial ‘combi courts’ rant. Mazibuko explained the reason behind her derogatory utterances, saying she felt betrayed and had acted in anger.

After a threatening and racially charged tirade at staff members during a provincial department executive meeting, Gauteng MEC for Sport and Recreation Faith Mazibuko has apologised and taken full responsibility for her actions.

At her appearance before the South African Human Rights Commission on Tuesday, April 16, Mazibuko said she was prepared to work with the commission in upholding the values of the Constitution.

“After careful reflection I would like to tender an unconditional apology to all South Africans who were offended by my remarks,” said Mazibuko.

Mazibuko said she had already apologised to Gauteng Premier David Makhura, her senior management team and those directly affected by her remarks. She would continue to dedicate herself to the “promotion and advancement of human rights and freedoms of citizens”.

“I will work with the commission as part of my honest endeavour and renewed commitment to social cohesion, diversity, integration and adherence to the values of ubuntu” she said.

The SAHRC has prescribed a one-day sensitivity and diversity programme for the MEC, to take place before election day.

Commission deputy chairperson Priscilla Jana said that as a commission whose priority was to monitor and protect human rights, they were disturbed and described Mazibuko’s comments as “divisive”.

“In terms of our Constitution equality and dignity is extremely important and it is our inherent right to uphold the dignity and equality of all persons living in South Africa,” Jana said.

Mazibuko landed in hot water after an audio recording was leaked last month — and published by amaBhungane — of her threatening staff members with dismissal as she pressured them to deliver sporting facilities known as “combi courts” before the 8 May elections. After threatening to force senior staffers to resign, the MEC’s tirade became racially charged as she chastised two senior staffers — an Indian woman and a white woman — for speaking back at her, according to amaBhungane.

“That’s why some departments, they don’t want to see a white woman or any Indian woman! It’s not about racism, it’s because you like talking English!”

She later apologised for her rant.

At the SAHRC on Tuesday, Mazibuko expressed her gratitude and appreciation for the invitation she had received from the commission. She said that the shared constitutional vision of establishing a society based on democratic values, social justice and fundamental human rights had remained close to her as a “gender activist and freedom fighter” since her younger days.

“In fact, I have not stopped fighting for the rights of the people — it is something I will continue doing” she said.

Explaining what transpired, Mazibuko said that she held an executive meeting with HODs, CFOs and chief directors at the department to evaluate work that had been done for the month, to have a re-look at challenges while preparing for the coming month. She said the reports from the meeting indicated that the department was underspending on its roll-out of infrastructure.

Mazibuko said that the outcome from that meeting was that after they had rolled out the 20 combi courts, their contact with Sports Trust would expire. She said according to the agreement they had with Sports Trust, this explanation sounded baffling.

“I thought we had an MOU (memorandum of understanding), I was not aware we had a contract with Sports Trust” Mazibuko said.

She said that because the department had already re-allocated money in the 2018/19 financial year to roll out another five combi courts, only to learn that the contract was coming to an end, she acted out of frustration “with young people not having facilities to play on and access to sports facilities”.

“I became angry and really wish to apologise for that, because it was uncalled for,” she said.

She said that she was neither bullying nor threatening the staff. She said it was not her intention to segregate, ridicule, or victimise them.

“We are held accountable by the members of the public to deliver services to them and really sometimes it may be frustrating, but I take full responsibility in ensuring that as executive authority I should not be the one found shouting or feeling like I was the only one who was betrayed,” she said.

Mazibuko said that she welcomed the intervention of the commission and that as a member of the executive council of Gauteng she had taken an oath of office to “obey, respect and uphold the Constitution”.

Mazibuko said that the remarks she made were not fuelled by racism, but acknowledged that they did sound like they were “causing divisions in accordance to how people look like”.

“The department I am deployed to lead is a diverse department. It has whites, Indians, and other races besides that, of a darker colour, like me. It is a department that champions social cohesion and nation-building, so it can’t be us or me who is found discriminating against others according to culture or nationality,” she said.

Mazibuko said there was no animosity between her and the staff members and that they had since maintained a good relationship.

She said the combi courts roll-out was in no way a strategic ploy to campaign for the ANC, but that there was pressure to attend to the needs of community members who had been waiting a long time for services to be delivered.

The SAHRC is drafting the specifics of the MEC’s one-day sensitivity and diversity programme. Jana said it was important to have such a programme in the country “and in this context to help build a nation”.

“We want to make sure that public officials, particularly, are responsible for maintaining social cohesion and not causing any kind of disruption or friction in the society we live in,” said Jana. DM