The promise-rich, but policy-light campaign for the hearts and minds of voters 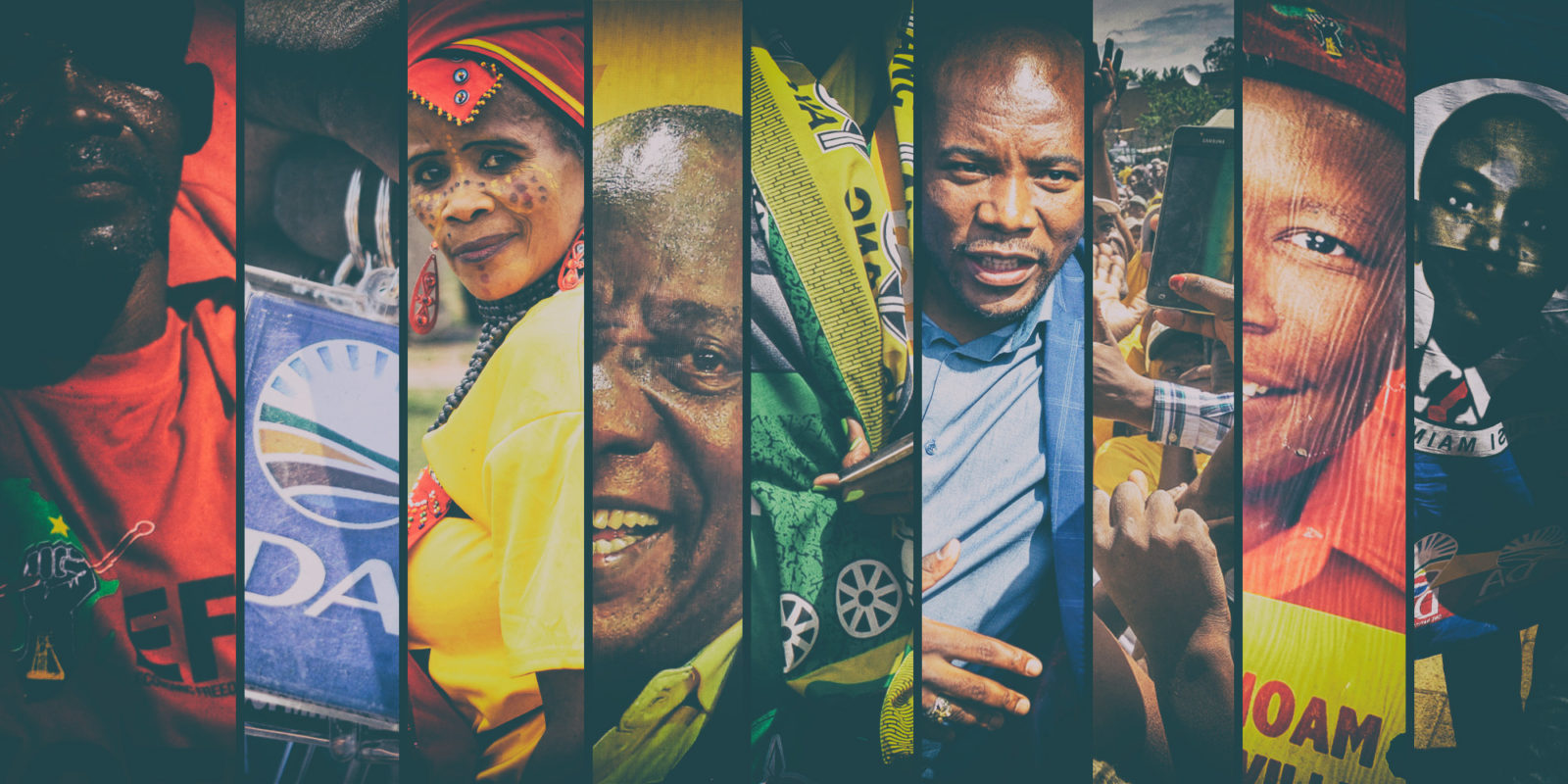 Voters have been promised much in a 2019 election campaign that’s been heavy on promises, even as service delivery protests show that implementation is lacking.

More promises, less detail seems to be the motto across South Africa, with a good dollop of opposition criticism of the governing ANC. While the EFF has called for a vote for “revolutionary change”, the DA’s change mantra maintains that it knows best. It’s a fluid situation until the ballots are cast on 8 May.

In just over three weeks, potentially 26,752,822 registered South African voters will cast their ballots. How many will actually bother to make their cross for provincial and national governments in itself will be a key indicator in the 2019 elections.

The 8 May election day wraps months of electioneering by political parties, whose gaze turned to the campaign as early as the second half of 2018. Any platform — including parliamentary debates, because they provided a stage — was used to fire the early campaign volleys.

The EFF on Wednesday said it was in its final phase of electioneering. The ANC is giving itself another week before stepping up the pace. The DA on Thursday indicated it was on a similar path. All will wrap up with closing rallies in various stadiums over the weekend of 4 May. The smaller parties are doing what they can, with the IFP canvassing heavily in KwaZulu-Natal while its president, Mangosuthu Buthelezi, hits the national campaign trail across other provinces.

There’s little doubt the ANC will win nationally, the question being by what margin. Various pollsters, be it Ipsos, the Institute for Race Relations (IRR) or others, indicate an ANC national win with anything from 55% to 62% of the vote. The DA is widely polled at best a couple of percent above its 22.2% support in the 2014 elections. EFF support is pegged at anything from 9% to 12%, the latter figure representing a doubling of support since its 2014 debut at a sliver above 6% nationally.

The better the ANC does, as goes one argument touted by, among others, veterans such as Mavuso Msimang, the more likely President Cyril Ramaphosa would able to finish the clean-up of the ANC. He would also be able to stamp his authority on a governing party where factions remain finely balanced and involved in bruising jockeying, as shown by the controversy over the ANC election lists with several candidates under a cloud of corruption claims or court rulings that found them having lied under oath.

A recent Afrobarometer survey, “Small improvements, not yet a ‘new dawn’: South Africans still see high levels of corruption” showed just short of two-thirds of South Africans, or 64%, say corruption increased somewhat or a lot in 2018-19. That’s a lot, but better than the 83% who thought so in the 2015 survey.

Just 16% believed corruption decreased. And only one in four believes the government is doing a good job-fighting corruption. Although most South Africans believe ordinary people could make a difference, almost two-thirds, or 63%, say reporting corruption “risks retaliation or other negative consequences”, according to the survey published on 9 April 2019.

The SAPS was perceived as most corrupt as 49% of South Africans believed most or all police were corrupt. Lawmakers didn’t fare too well with 44% of South Africans believing them to be corrupt, the same level as government officials. The survey shows some improvement for the presidency: Perceptions of corruption dropped from 46% in 2015 to 39% in late 2018.

And President Ramaphosa is key to ANC electioneering. The governing party, damaged by State Capture and corruption, service delivery failures and more, has long been aware the president — and his pledge to eradicate corruption — would be its drawcard. He’s polled higher than the party, one party insider acknowledged already in late 2018, and it was hoped Ramaphosa would pull up the ANC.

And so he’s been hauled out to knock on doors, pamphleteer and address mini-rallies in townships, villages and taxi ranks across the country, while holding so-called (ANC) presidential conversations with professionals, white “counterparts”, farmers, business people and other sectoral interests. In Cape Town, the ANC election posters are adjusted to also state: “Ramaphosa for president.”

Gauteng has emerged as the most contested province with both the EFF and the DA gunning for control there, as the ANC’s own polling, according to some insiders, shows it trailing at 47%. The EFF also has expressed certainty of winning North West and Limpopo, and being kingmaker in the other hung provinces. The DA says it’s positive about the Northern Cape and certain about retaining the Western Cape. The jolt of having dropped to 47% in the province the DA has held since 2009, according to its own polling Daily Maverick has been informed of, has been lessened by concerted electioneering and load shedding — the DA now polls at 54% in the Western Cape.

“Our campaign is quality. It is brisk. It is very focused on the voter. It is paying off”.

Voters have been promised the world in a 2019 election campaign trail. And as politicians are criss-crossing the country, communities also have asserted themselves to get their attention. Protests have recently hit across South Africa from Alexandra in Johannesburg, Khayelitsha and Gordon’s Bay in Cape Town to Bekkersdal on the West Rand and elsewhere. Often there is the threat to withhold votes.

Little seems to have changed by 2019.

Ramaphosa on Thursday 11 April went to Alexandra sporting an ANC black, green and yellow leather jacket and making promises, including one million houses, during his party political address to residents. Government’s own statistics show it build a total of 3.3 million subsidised houses across South Africa between 1994 and December 2018

Ramaphosa may have told Stellenbosch farmers earlier in April it was now about implementation as there were “sufficient policies”. But such implementation is, and has been, problematic. The factors underlying the protests and lack of implementation — the public servants, the will to implement or perhaps the capacity and the ease with which politicians shrug off responsibility and blame others — remain unchanged. It is unclear why there would be an expectation this would change after the 8 May elections.

On Wednesday EFF leader Julius Malema said in a briefing broadcast on eNCA that his party’s campaign was grass-roots based with volunteers going out every day, knocking on doors from township to village and town, but of only registered voters.

That shows a clear strategic focus: Get registered voters out in their numbers to support the EFF on election day. Even if there may be many others enthused about the EFF, unless they’re registered as voters right now they cannot be the focus of the EFF electioneering campaign.

The use of volunteers also may indicate that like the ANC, the EFF is tight on money. But the official spin remained how the EFF machinery was “well oiled and ready for battle”, according to Malema, pointing out leaders were on the ground with local structures.

“The ground is fertile,” he said, touting the EFF as revolutionary change-makers.

The DA’s message of change on the 2019 election campaign trail is very different — it’s about rejecting ANC corruption for DA efficiency and effectiveness, with its governance record in the Western Cape, Cape Town and other councils invoked as proof of ability.

It’s a campaign that like the ANC’s is centred around the party leader, with the DA leader Mmusi Maimane’s Kasi-to-Kasi tour. However, the DA also has a schedule of meetings of other national party figures such as MPs who with provincial counterparts host meetings and election events. Ten a day on any given day, according to one DA insider. And that is a key difference to an ANC election campaign that appears centred around the top six national officials as “listening campaigns”, but with seemingly haphazard linkage to provincial and regional ANC structures and politicians.

The DA believes it has done what it must to win over voters, and that it is on track with its three aims — retain the Western Cape, make a good run to clinch Gauteng and the Northern Cape and show solid growth across provinces, particularly KwaZulu-Natal and the Eastern Cape.

DA election campaign manager Jonathan Moakes told Daily Maverick the party was buoyant, given its polling and tracking. He didn’t give much detail, and definitely not the numbers, but the DA’s provincial manifesto launches are having a positive impact, as do SMSes.

“As we stand, we are well positioned,” said Moakes, adding it was looking good in the Western Cape, while the Northern Cape was fertile territory.

“Gauteng is looking more like a battle ground. The ANC has dropped quite significantly. We’ve grown. The EFF, in terms of what we are tracking, stayed the same. Gauteng is up for grabs.”

But like Malema and Mbalula, Moakes knows it’s all about the day on 8 May. Said Moakes:

“You don’t know until election day, until the results come in. The only poll that matters is the one on election day”. DM