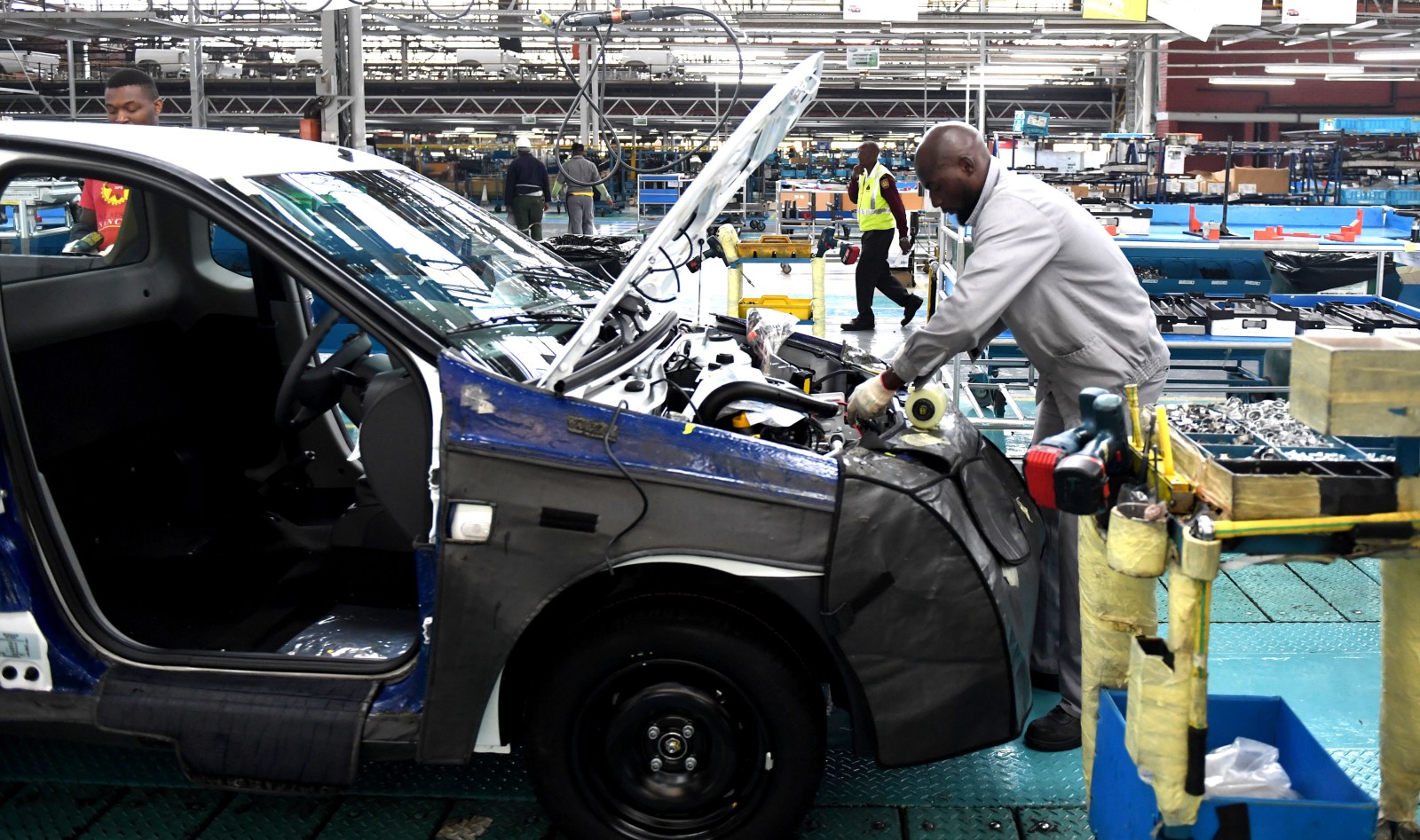 Workers at the Nissan factory in Rosslyn assemble Nissan bakkies during a visit by President Cyril Ramaphosa. Photo: Deaan Vivier

To great political applause, car company Nissan has said it will spend R3-billion on its plant in Rosslyn outside Pretoria to build the Navara model. Announcements like these regularly punctuate the news; it’s all part of SA’s grand Automotive Production and Development Programme, arguably the crown of SA’s interventionist industrial effort. But if this policy is working so well — and it does seem it is — why is it not being applied to other sectors?

Japanese car company Nissan announced recently that it would be building a new model in South Africa, in this case, the Navara, a rather snazzy-looking bakkie, and as always that entails a wodge of new cash.

Gearing up to build a new model is a serious business in the car industry. Behind these headline announcements are massive efforts, beyond the conception of most consumers. Every car build requires something like 16,000 components to be built or imported, and they all have to arrive at the same time, at the right place, to the right specification. If you think this is easy, just ask Elon Musk how difficult it is. Car production is really one of the pinnacles of the modern industrial effort.

SA’s car industry system has its detractors, but overall, there is no denying it’s a fantastic effort. The industry is now about 7% of GDP and is now, amazingly, more or less the same size as the mining industry. What’s more, it is a great example of co-operation and co-ordination between business, government and labour.

And that raises two crucial questions. Is it working, and if so, why has it not been expanded to other sectors? Behind each of these questions, there is a complicated story.

On the question of whether it works, there are three different perspectives. The first is about jobs. The Navara expansion will entail about 400 more employees at the Nissan plant. But like many industrial efforts, this is really just the tip of the iceberg. Estimates vary, but all the other aspects of the industry — selling cars, fixing them, building components and financing them are all in themselves massive industries.

It is worth noting that SA is in itself not a great place to build cars. The local market is small, and it’s far from the big markets around the world. The development of the industry has been a meticulous long-term effort which began in 1950s and which has been somewhat miraculously maintained by successive governments in the face of militant trade unions and very different governments with often different priorities.

What the effort has not done is result in noticeably cheaper cars. Various organisations have made comparisons at different times, and of course, these comparisons are tricky. Models differ and markets differ. Generally, the surveys show, SA’s car prices are a little cheaper than in Europe and a bit more expensive than the US. Of course, South Africans don’t earn as much as Europeans or Americans, so relatively they are much more expensive.

It is possible to see some advantage in some classes of locally produced cars. One example is to compare the locally built BMW X3 (in this case the S-drive 20i) which retails in SA for around R660,000, compared with the imported Mercedes-Benz GLC (in this case the 250 4Matic) which retails for R720,000. Interestingly, in the UK the difference is almost exactly the opposite; the Merc is cheaper by the same margin. In the US, the same BMW retails for the equivalent of R572,000.

Still, the differences are not huge, and to the extent that they exist, they are explained by import duties for the imported cars, and ad valorem duties for both. Like the bubble in a level, prices tend to even out. Profits, of course, do not, but given that none of the car manufacturers reveals their profitability by nation, we don’t really know what the differences are.

What we do know is that none of the car companies internationally are making huge amounts of money. Return on equity and return on investment numbers for the big car companies are minuscule, reflecting the hugely competitive nature of the industry. In addition, SA production numbers are, we are given to understand, a little higher than equivalent plants around the world.

The tricky question is this: How much tax is the SA government giving up to make the system work?

Head of the National Association of Automobile Manufacturers of South Africa Mike Witfield says it wrong to describe SA’s system as a subsidy system — it’s more of a trade-related investment measure. This is because the benefit that local producers get is a reduction of import duties equivalent to a proportion of their local production. They get no general tax reduction or cash benefit of any kind. Their only advantage is their ability to reduce tariffs, which for government is a major balance of payments benefit.

There is, however, a significant multiplier effect, that government-appointed industry consultants measure at about three times the income the government forfeits through the effective tariff reduction applied to a limited class of goods. And the government gets a tax boost, by taxing the consumer through ad valorem taxes (tax on property) rather than the producers.

It’s understandable that the industry should be pro the scheme: It wouldn’t exist without it. The government, of course, is in a weak bargaining position because no government would want to be accused of destroying the car industry.

Yet, if it is such a success, then why hasn’t it been extended in rapid fashion to every other industry in the country?

One answer is that efforts are being made in this direction. Henry Pretorius, chairman of the Automotive Production and Development Programme committee, says President Cyril Ramaphosa has initiated several sectoral bases studies, particularly in agri-business, textiles, and pharmaceuticals.

But it’s much more complicated than it might seem. The great advantage in this respect, of the car business, is that it’s dominated by multinationals with global supply chains. Decisions might be hard to come by, but the number of players is small, and it’s easier to get general buy-in.

In textiles, for example, the industry is fragmented and the entire business model of almost all of the existing industry is based on the importation of foreign goods. Trying to get the industry to put in new plant and trust that the government will stick to policies and work with the industry is a tough call.

In agri-business, the dynamics are once again quite different, although the fragmentation is huge. The producers are almost all local, so their local production is up and running. Their requirements are really for the government to help develop foreign markets, to lower transport costs, and to be efficient trade facilitators, all areas where the government has gone backwards or remained largely stationary.

Still, Whitfield says there are a lot of “learnings” the car industry could contribute to other sectoral initiatives.

The most important? Compromise, trust and stability — all hard things to come by in 2019. DM