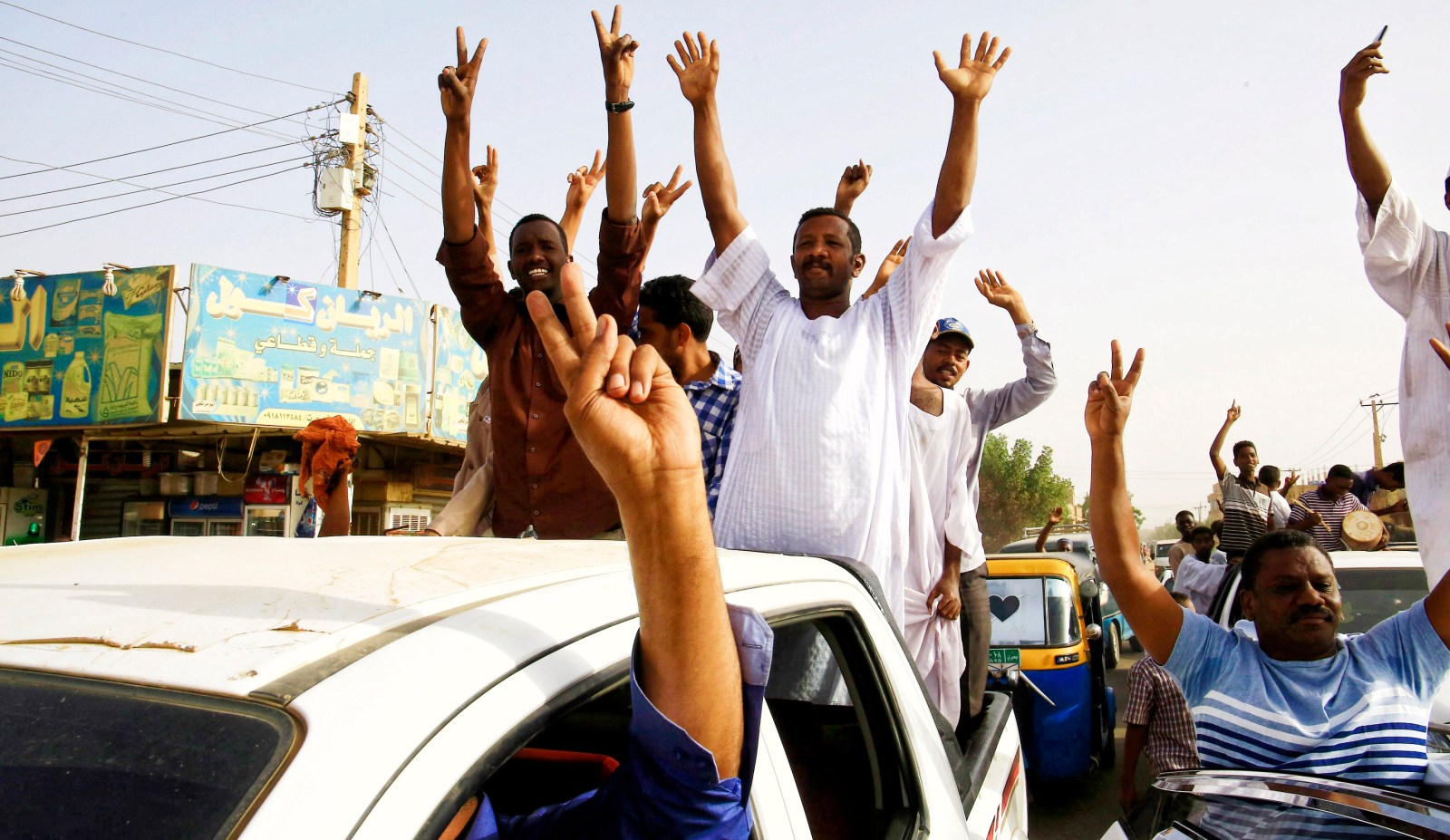 Sudanese people celebrate as they head towards the Army headquarters amid rumors that President Omar al-Bashir has stepped down, in Khartoum, Sudan, 11 April 2019. According to media reports, Omar al-Bashir was expected to step down from the presidency following a four month uprising, held by citizens calling for his resignation. EPA-EFE/STR

Experts differ over whether the new Sudanese military junta should be pressured to surrender ousted President Omar al-Bashir to the International Criminal Court.

The toppling of Sudanese President Omar al-Bashir by his own security forces under pressure of large and growing popular protests has prompted demands for him to be transferred to The Hague for prosecution by the International Criminal Court (ICC).

However, analysts are not all agreed whether the military council which has taken over Sudan, ostensibly for a two-year transition until elections, will want to hand him over to the ICC — or even if it’s such a good idea.

He was first referred to the ICC by the UN Security Council in 2005 and then later indicted by the court on charges of genocide, war crimes and crimes against humanity for atrocities he allegedly ordered against ethnic groups in the turbulent western province of Darfur.

Some analysts fear that surrendering al-Bashir, who had been in power for 30 years, to the ICC could be the spark that ignites a counter-coup by his remaining loyalists in the security services.

However, Kaajal Ramjathan-Keogh, executive director of the Johannesburg- based Southern Africa Litigation Centre (SALC) differs. She said though SALC was pleased to hear that al-Bashir had been toppled, “this is only the first step towards change”.

“Sudan should also surrender al-Bashir to the International Criminal Court to ensure that victims of international crimes can obtain justice. We remind the Sudanese authorities that there are two outstanding ICC arrest warrants for al-Bashir.

“If the authorities are genuinely minded to end mass atrocities and respect the rule of law it is vital to surrender al-Bashir to the ICC.”

It was SALC which in 2015 asked the Pretoria High Court to issue an order to the South African government to prevent al-Bashir leaving the country while he was visiting Johannesburg to attend an African Union summit.

The court later ruled that al-Bashir should be arrested by the South African government, under its obligations as an ICC member state, but the government let him escape. It was later reprimanded by the ICC for doing so.

The incident prompted the Zuma administration to submit legislation to Parliament to authorise South Africa’s withdrawal from the ICC. However, the current Ramaphosa administration is re-considering this decision.

Ramjathan-Keogh added that SALC was calling for a civilian transitional government in Sudan and a commitment to end impunity.

“We have seen the military topple Robert Mugabe in Zimbabwe without resulting in any real change for Zimbabwean citizens.

“We caution the Sudanese military against forcing a military solution which fails to facilitate real political change in Sudan,” she said.

But Allan Ngari, senior researcher at the Pretoria-based Institute for Security Studies, does not believe this is the right time to demand that the transitional Sudanese authorities surrender al-Bashir to The Hague.

“The country is too politically fraught. In terms of sequencing, it might be better to ensure a peaceful transition first,” he said, suggesting that putting pressure on Khartoum now could be destabilising.

Once a peaceful transition has happened, then the international community should demand the surrender of al-Bashir. Ngari noted that if al-Bashir were ever brought to court, the ICC would need the full co-operation of the Sudanese authorities in prosecuting the case, for instance in gathering evidence.

The risk analysis company Signal Risk has warned that handing al-Bashir to the ICC could spark resistance by his loyalists. It said there were already some signs of such resistance.

Initial indications were that “the coup is supported by various factions of the state security apparatus — namely the Sudan Armed Forces, National Intelligence and Security Service and the Rapid Security Forces — which reduces previous concerns of possible factionalism between security agencies aligned with the al-Bashir administration and those ranged against it.”

However, it added that there are also instances of some rearguard action by al-Bashir supporters, citing reports of sniper fire on protesters and soldiers near military headquarters in Khartoum on Thursday even after al-Bashir was toppled.

These incidents “suggest that there may still be elements within the armed forces loyal to al-Bashir”.

“Acts of destabilisation by such individuals cannot be discounted and could be directed against both security and civilian interests. A major catalyst for such action would be a decision by the transitional military council to transfer al-Bashir to the ICC, where he is wanted on war crime charges,” it warns.

Signal Risk has also warned that it is by no means clear that “the installation of a transitional military junta will satisfy the demands of protesters”. It notes that while the military took sides with the protesters against the Bashir regime, it might react very differently if the protesters continue to protest against the new junta.

“The situation has the potential to deteriorate in the immediate term, depending largely on the response by protesters to the recent developments and the extent of unity within the state security forces.”

Auf claimed that the statesman had been arrested, the Sudanese constitution suspended, and all authority transferred to a transitional military council. The council would govern Sudan for a period of two years until elections were held and a civilian government democratically elected.

In the same communique, Auf said that a three-month state of emergency had been imposed.

“Although yet to be substantiated, reports indicate that the decision to remove al-Bashir from power was made by the country’s influential security agencies,” Signal Risk said.

This decision had followed growing reports of mutinies within the country’s security agencies over al-Bashir’s position.

“These tensions had escalated into armed exchanges between members of the National Intelligence and Security Service and the Sudan Armed Forces in Khartoum when the former attempted to disperse the protest site outside the latter’s headquarters,” Signal Risk said. DM