Book burning ‘not what the ANC will ever stand for’, Ramaphosa tells meeting, with Magashule in the room 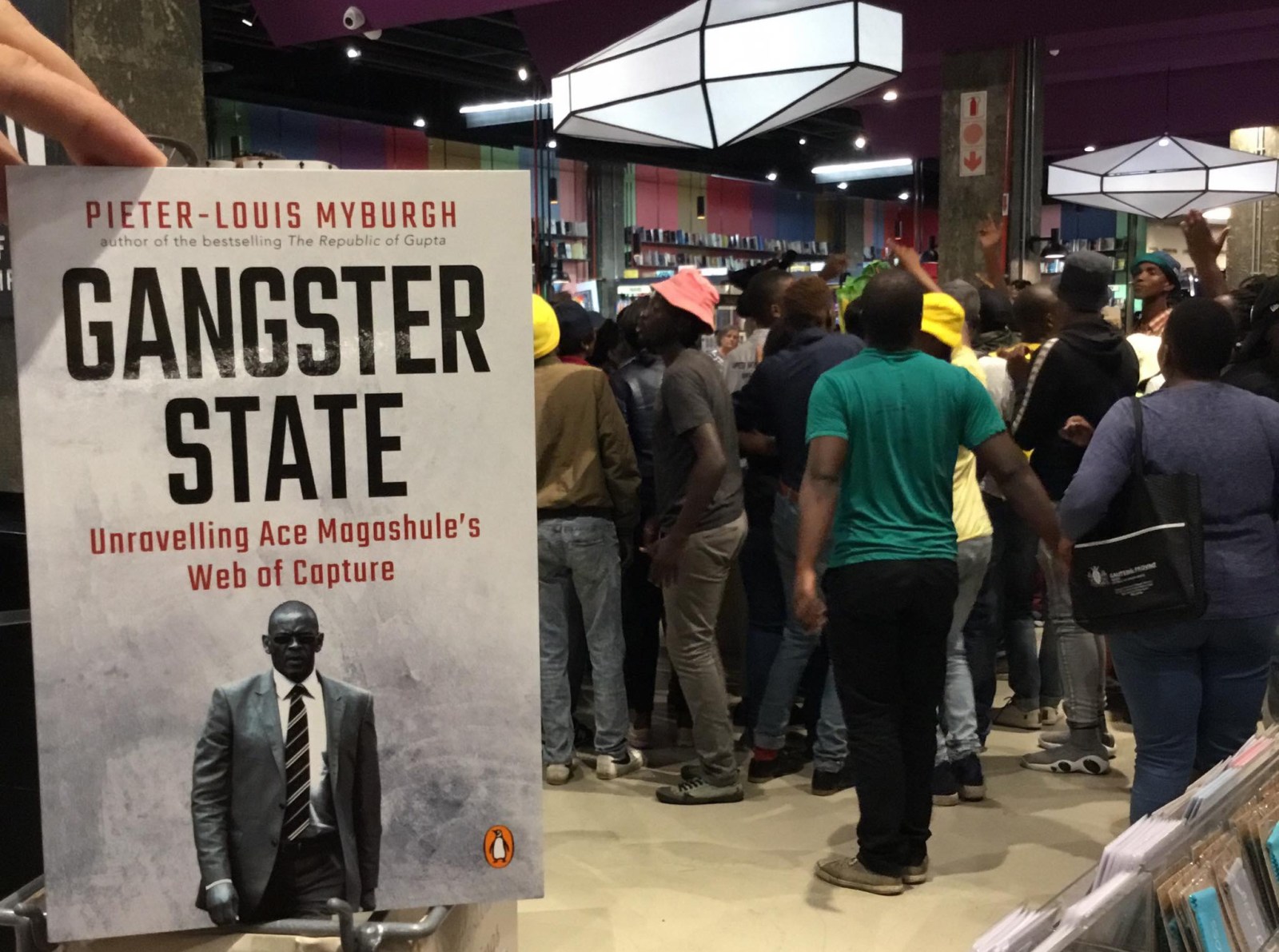 President Cyril Ramaphosa has condemned the disruption of book launches and the threat by ANC Youth League leaders to burn Gangster State, a book by Pieter-Louis Myburgh. ANC Secretary-General Ace Magashule, whose exploits are the subject of the book, was also in the room.

It is less than a month before the election, but in between campaigning, President Cyril Ramaphosa has also had the task of doing ANC housekeeping in order to convince hesitant voters that the New Dawn is really upon them.

On Thursday night Ramaphosa again attempted to find the party’s soul and to recapture it from the state capturers by joining the chorus of condemnation against those who – dressed in ANC T-shirts and led by those identified as local ANC leaders from, amongst others, the Free State – disrupted the launch of a book on ANC Secretary-General Ace Magashule in Sandton on Tuesday night.

Also subject to his condemnations were ANC Youth League leaders from the Free State, who soon after the disruptions organised to burn the book at a local dump site. They were pulled back less than 24 hours after their WhatsApp invitation to the bonfire started doing the rounds, and the event was swiftly called off. There’s also talk of pending disciplinary action.

The book, Gangster State, pulls together Magashule’s alleged exploits in the Free State that have hitherto only been reported on in scattered newspaper exposés and whispered gossip, and predictably Magashule wasn’t happy about these being exposed. (He told Daily Maverick on Thursday night his lawyers were drawing up papers.)

Ramaphosa’s chance to put those who reacted like thugs squarely on the dark side of his New Dawn came when he spoke about the kind of ANC leader and member the party’s OR Tambo School of Leadership wants to produce.

In a clear warning against corruption and unethical behaviour, Ramaphosa said:

“The school is aimed at producing cadres who do not need to be compelled to do the right thing. Who put the movement and the country above their own personal interests. These need to be cadres who fully understand the fundamental values and principles of our movement. Cadres who reject all forms of intolerance, all forms of degrading the values and the principles of our movement.

“These are cadres who, like all of us, in uncertain terms condemn the actions of those who tend to do things that are strange to our movement. Things such as disrupting the book launch in Johannesburg a few days ago and who called for books to be burnt.”

At this point, there was loud applause from the audience of ANC NEC members and supporters, guests from fraternal organisations, businesspeople, academics and diplomats. With Magashule present, Ramaphosa continued:

“These are cadres who earn support for their views through the strength of their argument; who earn respect through their adherence to the highest values of our movement, not through their capacity to intimidate or any form of thuggery. What we witnessed earlier this week is not what the ANC stands for,” he said, with the end of his sentence drowned out by approving applause. Ramaphosa spat out the last sentence to more applause:

“It does not define what the ANC will ever stand for.”

Magashule sat right at the front table of the packed hall, and everyone knew the wrath was directed at him. It was the kind of dressing-down you’d only wish on your worst enemy.

Former president Jacob Zuma, with who Magashule is still seen to be sympathising, walked in a few minutes after this dressing-down, two-thirds into Ramaphosa’s speech. He’s done this at other occasions as well, most recently at the ANC’s January 8th birthday gala dinner in Durban.

There were shocked whispers from the back tables as he entered, with an entourage of security, but Ramaphosa didn’t wince. There was talk from some other speakers that Zuma would be invited to lecture at the school.

After his speech, Ramaphosa went back to the main table, where Zuma was also seated and greeted the late arrival with a handshake and smiles. Everyone held hands and looked unified as music played and cameras flashed.

But with his speech, Ramaphosa drew a clear line in the sand between his ANC and the ANC of Zuma. It’s still not clear which one will win after the election though. DM