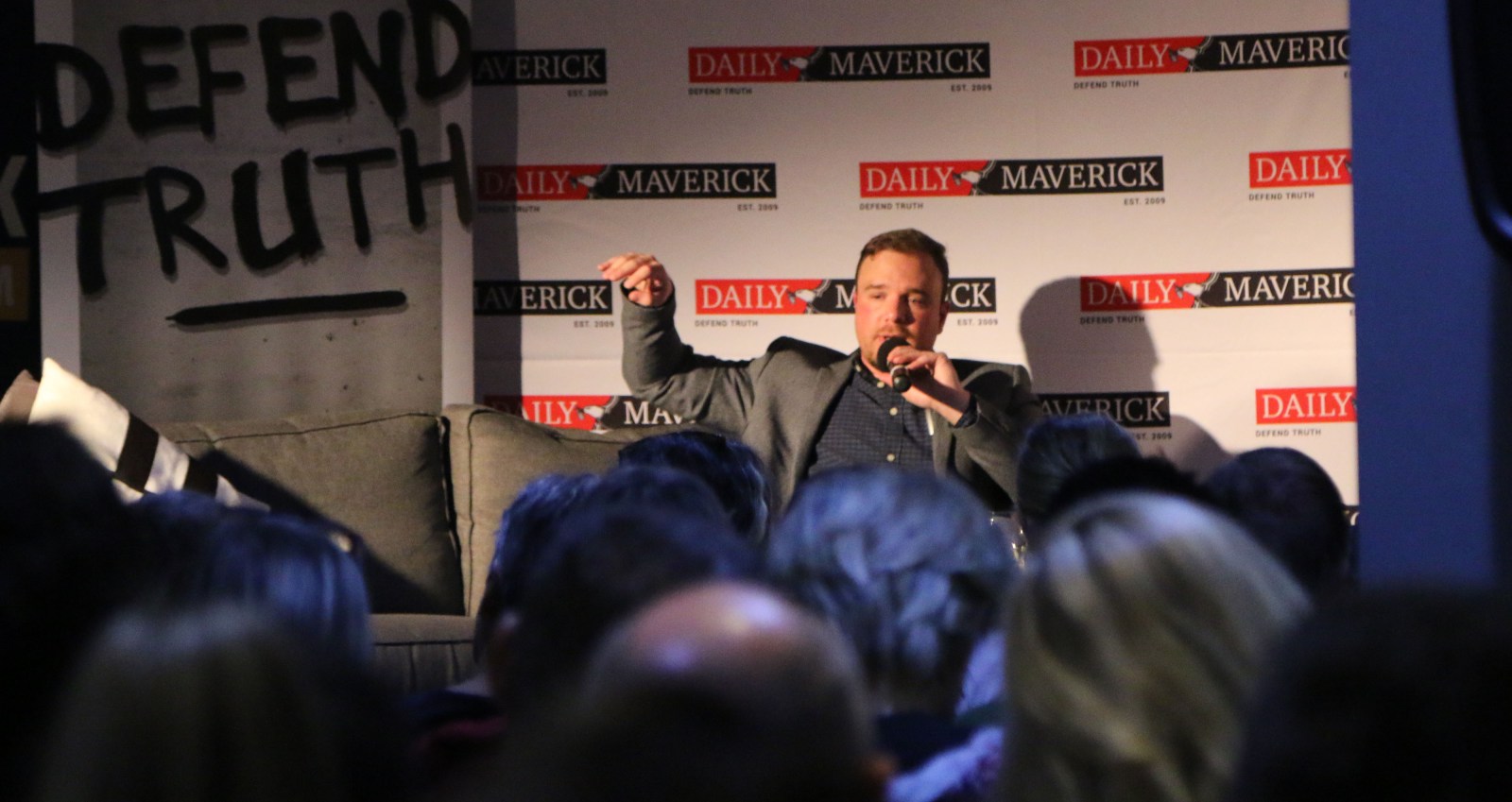 After a last-minute venue change, Pieter-Louis Myburgh spoke to a packed house and opened up on the implications of his book, Gangster State: Unravelling Ace Magashule’s Web of Capture. Myburgh described many of Magashule’s dealings as Free State Premier and responded to the recent controversy surrounding the book.

After a whirlwind 48 hours, Pieter-Louis Myburgh had a positive outlook when he finally launched his book, Gangster State: Unravelling Ace Magashule’s Web of Capture, in Cape Town on Thursday evening.

“It really feels like a celebration of South Africans’ interest in current affairs and issues that are important,” he said. “I think that the feedback has been immensely positive and I really take courage from it.”

On Tuesday 9 April, protesters, some dressed in ANC regalia, disrupted the planned Johannesburg launch, ripping copies of the book which eventually caused the event to be cancelled. The ANCYL Free State also planned a ceremonial book burning for 15 April, but those plans were later halted after the ANC stepped in and condemned the actions in Johannesburg and the book burning plans.

A Cape Town launch was planned for Thursday at Exclusive Books, but early Thursday morning the bookstore and the V&A Waterfront, citing security concerns, decided to postpone the event. That decision drew widespread condemnation on social media.

The event was eventually hosted by Primedia at its Cape Talk and KFM studios in Green Point, Cape Town but only 150 tickets were made available for Maverick Insiders. There was no noticeable protest or attempt to disrupt the event, despite speculation after Tuesday’s disruption.

News24 editor-in-chief Adriaan Basson, who interviewed Myburgh for the event, started off by asking all audience members to tweet @V&A Waterfront with a negative emoji, which many — including Basson and Myburgh — did. Earlier on Thursday, an Exclusive Books spokesperson told Daily Maverick the ANC was “planning to have a rally near the V&A (Waterfront) and we can’t be too careful”.

At the launch, Myburgh noted that President Cyril Ramaphosa had been very quiet regarding the revelations in Gangster State. But shortly after the book launch event, Ramaphosa, speaking in Midrand, condemned the Tuesday launch disruption with Magashule in the room.

“It does not define what the ANC will ever stand for,” he said, according to Carien du Plessis on Twitter.

Myburgh and Basson touched on a number of revelations contained in the book, making the audience groan when Myburgh laid out the multiple State Capture operations.

Myburgh described how the Gupta family factored into Magashule’s dealings in the Free State.

“It’s almost like the Free State was a bit of a stepping stone for them,” Myburgh said.

“The Free State certainly isn’t the biggest prize, but if you start adding it up, it’s not an insignificant addition to their State Capture earnings.”

He continued by touching on the well-documented connections between former president Jacob Zuma and the Gupta family and noted that the terms of their initial meeting are still unclear.

Myburgh also discussed a section of his book that describes the lack of quality journalism in the Free State. He touched on the story of the Free State Times, a former newspaper that gained traction in the province, but was then forced out of business after Magashule, Myburgh said, shut down all advertising in the paper.

Finally, he addressed how public figures have responded to the allegations in his book and what the ultimate fallout could be.

“I’m concerned that in the current pre-election phase, there seems to be a stalemate in terms of action,” he said.

He said we had heard about a specialised unit forming under the new National Director of Public Prosecutions.

“The ball really is in their court to show us that… they’re actually going to start prosecuting people,” said Myburgh.

Myburgh is a journalist at Daily Maverick’s Scorpio and Gangster State is his second book. DM