Ace in a (deep, uncomfortable, dark and lonely) hole 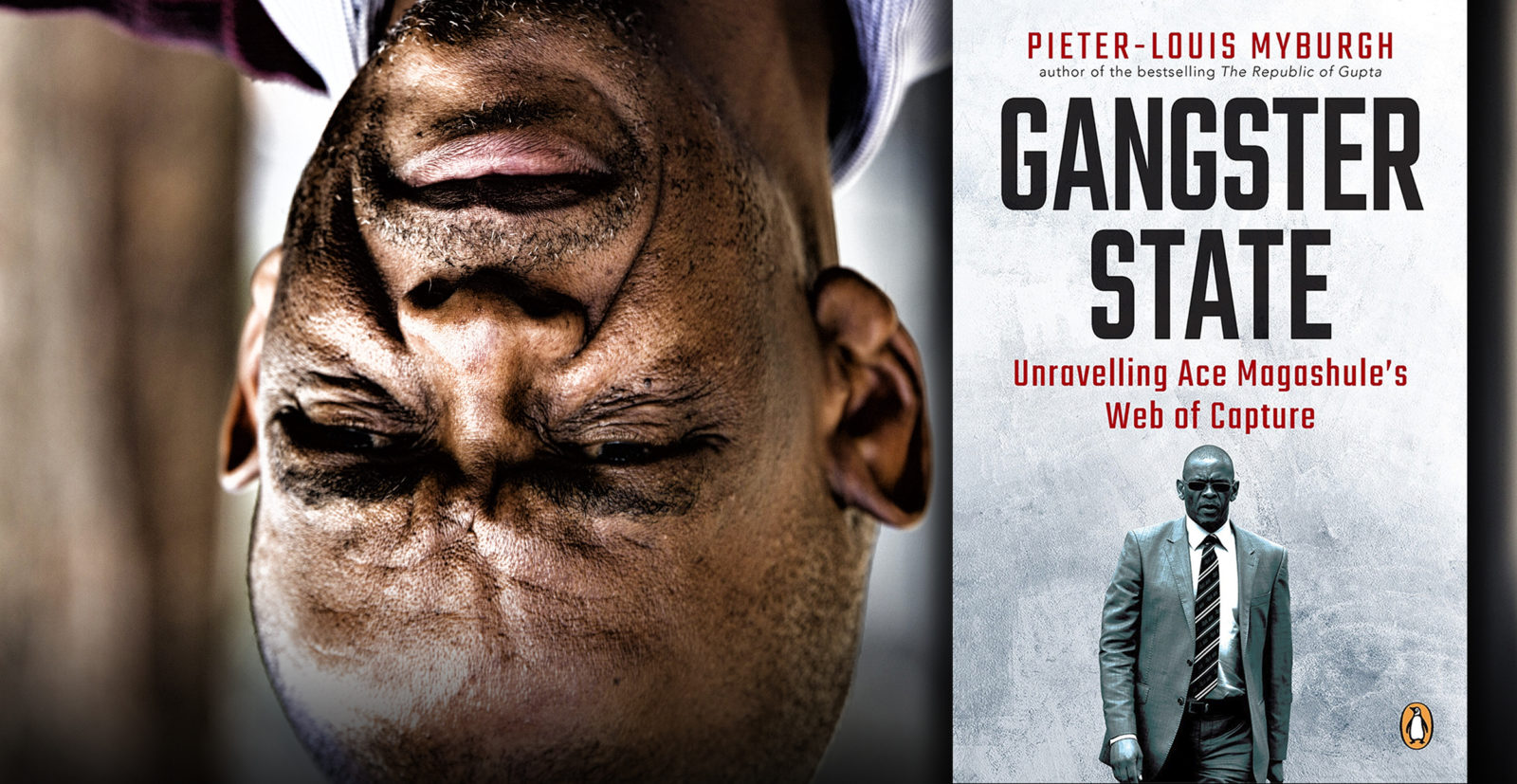 Disruptions and threats of book burnings appear to reveal more about the levels of support Ace Magashule enjoys than he would have liked. That they are thugs is obvious, but more revealing is that the ANC Secretary-General’s support might not be as extensive as he would have us believe.

While it can sometimes seem that anything goes in South African politics, from time to time an incident will occur that shows there are red lines in our society that you (still) cannot cross.

In the case of the Pieter-Louis Myburgh’s tome on Ace Magashule’s capture of Free State, a promise by the ANC Youth League in the Free State to burn the book, and the disruption of the book’s launch, has shown that one of those immovable lines is a sacred circle protecting our freedom of speech.

On Wednesday, significant portions of the ANC spent much of the day queuing up to condemn the disruption. The fact that the disruption occurred, and that there was such widespread and unequivocal condemnation of it, demonstrates that something happened in the balance of power within the ANC and, at least publicly, Magashule was suddenly on his own. This shift, even if temporary, could have important implications.

The timeline to this week’s series of events that culminated in threats of book burning and disrupted book launches is important.

On Tuesday evening, a launch of Myburgh’s Gangster State: Unravelling Ace Magashule’s Web of Capture, was disrupted. Protesters entered the Sandton City Exclusive Books store and tore up copies of the book. The launch had to be abandoned, although Myburgh did what any journalist would do under the circumstances — he continued to autograph copies of his book and had a series of radio and television interviews to report on the disruption.

Almost simultaneously with the book launch disruption, a statement was released by the Free State ANC Youth League. It referred to the book as “puke”, and used the word “Stratcom”, which is fast becoming the insult of choice for journalists. The statement promised that there would be a ceremony to burn the book at a dump site in Mangaung. To add to the racial tinge of the statement, it said that the “apartheid flag” would be burnt with it.

There can be no doubting the intent here. The league’s provincial secretary, Reagan Booysen, was interviewed on the SABC News channel. In the interview, he claimed the book was “satanic”. When asked if he would prevent Myburgh from speaking about his book in the Free State, he said that he would prevent Myburgh from making his claims “through any means”. When pressed on whether he would use violence, he stopped just short of confirming that he would.

Within the hour, on Tuesday night, the ANC at Luthuli House had issued a statement condemning both the disruption and the pledge to burn the book.

But the Free State ANC Youth League was undaunted. On SAfm on Wednesday morning, its spokesperson Sello Pietersen said the league would make good on its promise. He also denied that this was evidence that his league did not respect the authority of Luthuli House.

Luthuli House, of course, in the form of ANC acting national spokesperson Dakota Legoete, had a very different interpretation. Just half an hour later on the same radio station, he condemned the Free State Youth League’s planned action in the strongest possible terms.

Meanwhile, on Twitter, ANC Chief Whip Jackson Mthembu was demanding that those who disrupted the launch be arrested, as well as disciplined by the ANC. Somehow, he put his past actions in calling for a boycott of the City Press newspaper behind him. (In that instance, he had demanded that the paper take down an internet image of the painting The Spear which portrayed then President Jacob Zuma’s private parts.)

Then more statements started to flow. The presiding officers in Parliament condemned the Free State Youth League, opposition parties, of course, joined the queue, media bodies such as Sanef and the Freedom of Expression Institute did what they are supposed to do. Even EFF leader Julius Malema said that disrupting a book launch was wrong and that the way to counter ideas was through other ideas.

But the following two public statements were particularly interesting:

The first was again from Luthuli House, this time from Magashule himself. He said, “those purporting to be ANC members and supporters disrupting book launches, burn books and intimidate authors and journalists in my name or to be revolutionary should desist”.

He went on to say that these actions amounted to political intolerance.

This statement alone shows that Magashule was under pressure to say in public that he was disavowing these actions. Even Zuma, when people made threats against his political opponents, never disavowed the people who did it. Magashule was in a position where he had to.

The second interesting comment came from Deputy President David Mabuza. He was on the campaign trail when he told the SABC that the disruption had to be condemned “in the strongest terms”.

In the end, inevitably, the ANC Youth League in the Free State had to stand down and withdraw its threat, after “engagement” with Luthuli House.

These developments are particularly revealing because they underscore one of the more interesting dynamics to emerge since the book was first published.

A mere week after the fiery “Hands off our SG” statement, no one in the ANC is publicly supporting Magashule.

It is now clear that the ANC’s national executive committee meeting last week took a decision that Magashule must fight these claims on his own. Even then, there has been hardly a whisper of support for him from any of those who might be tempted to break such an injunction.

This means that the only groups publicly supporting him are the Youth League in the Free State and Cosas in the Western Cape. There are several reasons for this.

The first is that the evidence of Magashule’s wrongdoing may be too strong to refute. Those in the ANC around him may well know much more about his operations than Myburgh does and may feel that to get too close to him would not be in their best interests right now.

Then there is the problem that the interests of those who tried to keep Zuma in power are not quite as aligned as they once were. This may be the result of a patronage system that is breaking up, which has made it more difficult to mount a concerted effort to defend Magashule.

From a structural point of view, this may also underscore what Magashule’s real problem is — that he has come to this position with only a provincial power base, and not a national one. As a result, it is difficult for him to expect support from other groups unless he reaches deals with their leaders.

But there is always the chance this group is trying to keep its powder dry for future fights — that they don’t want to reveal any strengths that they might have just yet.

It is in this context that the repeated chatter about a possible move against Ramaphosa after the elections should be considered. It’s an oft-repeated idea from several quarters that after the elections a group of people in the ANC will try to remove Ramaphosa, both as president and as leader of the ANC.

Cosas in the Western Cape on Wednesday issued a statement saying that there should be a National General Council (NGC) before the elections, “least we elect hyenas into power who will sell the revolution to the highest bidder (sic)”.

While interventions from Cosas in the Western Cape have not in the past been noted for their significance, the importance here is that it may be the first alliance formation to breathe the word “NGC” in public.

And it would be foolish to think the rest of society would sit idly by and do nothing. The SACP, for example, would immediately contest the next elections on its own, and there would be a huge reaction from broader society to any move to remove Ramaphosa, who remains South Africa’s most popular figure by far.

This latest series of incidents creates an unusual prism through which to gauge the support of the different political figures within the ANC.

For Magashule, another crucial test is just five days away. He has promised that he will take legal action against Myburgh. He also said last week that that would be in “two weeks’ ” time. If Magashule does not take that promised action next week, it could be confirmation that he is in a very difficult position. And that Myburgh’s facts cannot be challenged. DM