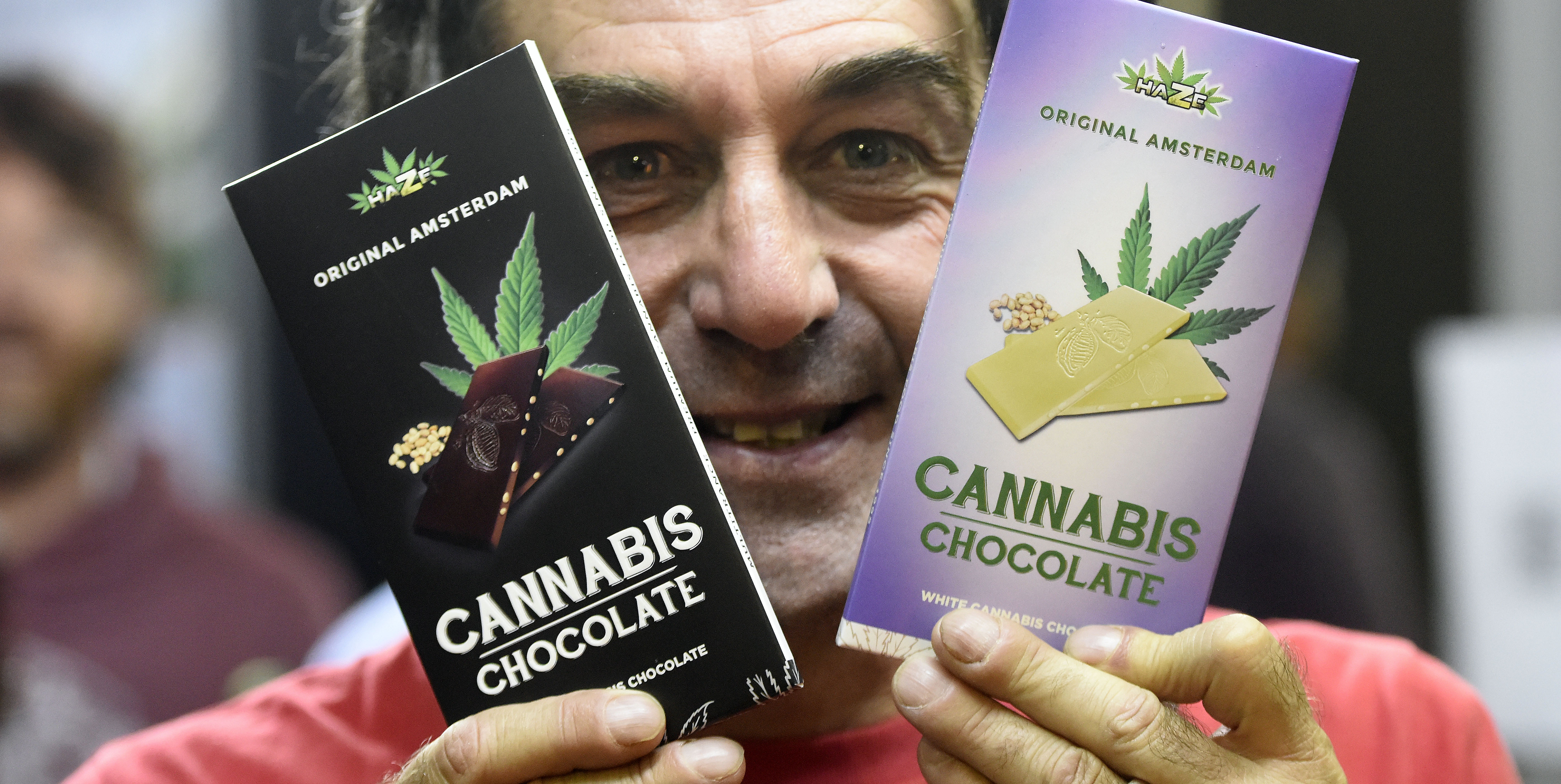 Mark Charnas displays cannabis chocolate at the Cannabis Expo at GrandWest Arena on 5 April 2019 in Cape Town, South Africa. In just less than a year since the home use of cannabis was legalised, Cape Town hosted an expo where more than 100 exhibitors showcased a variety of cannabis-related products and services. (Photo: Gallo Images / Brenton Geach)

For the first time, Cape Town hosted the Cannabis Expo from 4-7 April at the GrandWest Casino Hotel. The Expo has been held in the wake of a landmark court ruling which has wider implications for the business of cannabis.

This weekend the Cannabis Expo in Cape Town, previously held in Pretoria and Durban, explored the developments emerging from the Constitutional Court judgment and the implications it has for businesses in the cannabis industry.

It was clear that a huge and contentious issue for businesses is licensing. The current legislature only grants licensing to grow cannabis for medicinal purposes.

The Medicines Control Council (MCC) is meant to “regulate the availability of quality medicines which are safe and efficacious for their intended use”.

The MCC acknowledges that there has been a growing body of research that shows that some people react better to medical cannabis as a form of treatment than to traditional medication.

This is why medical practitioners can apply to the MCC to have access to cannabis for their patients. “Cannabis products intended for medicinal purposes may thus be made available, in exceptional circumstances, to specific patients under medical supervision,” reads the MCC guidance document.

One of the stalls at the Expo was the Webber Newdigate Attorneys stall which “helps people get licensing,” said attorney Matseliso Taka. Taka is based in Lesotho which has legalised medical cannabis.

What a client would need to apply for licensing in Lesotho is an application form, a site of production, infrastructure and experts to assist with environmental assessments.

Beyond that, the costs in getting the licence are what hinder people from getting one. Nico Kriek, a regulatory pharmacist and managing director at the Cannabis Compliance Bureau, which helps people get licences in South Africa, says that it can cost up to R6-million.

Myrtle Clarke, the Managing Director of Fields of Greens for all, an NGO that focuses on policy development and litigation on legalising cannabis, did her presentation on how the cannabis industry is moving “from a movement to an industry”, she added a comic that read “licensing is when government takes away your right to do something and sells it back to you”, “like hell am I going to ask them (government) for permission to grow my weed,” Clarke told the audience.

Clarke and her husband, Julian Stobbs were the intervening parties in the 2018 Constitutional Court case which ruled that privately using cannabis was no longer illegal.

Clarke and Stobbs were arrested in 2010 for smoking and growing cannabis in their home. “Our case as the dagga couple is not over, it has been postponed to 2021,” said Clarke.

Joanne Parry, Clarke’s assistant, told Daily Maverick, that she doesn’t think it’s a good idea for the government to regulate the cannabis industry because “South African politicians are corrupt.”

A common thread with licensing is how expensive it is. Both Taka and Kriek admit that mostly foreign-owned business or individuals are the ones willing and able to pay the hefty costs.

This means that poor farmers like the ones in the Eastern Cape who farm cannabis for survival would not be able to pay for medical cannabis licences.

And that is why Fields of Green for all wants it to be accessible for everyone. “We want South Africa to have fields of green for all, not some. All,” concluded Clarke.

The other stalls there were The Cannabis Energy Drink, an energy drink that has the same amount of caffeine as a cup of coffee, it also has small amounts of THC (tetrahydrocannabinol), which is an ingredient found in cannabis.

The Cannabis Oil Research, which does research into cannabis for medicinal purposes, was also present. They also offer clients a free medical consultation.

The Cannabis Industry Development Co-operative Western Cape (CIDC-WC) had a stall as well. The CIDC-WC is “an industry body” that lobbies government regarding the cannabis industry, said the Treasurer, Natie Ferreira.

Ferreira told Daily Maverick that the CIDC-WC is opening branches nationally and recently launched one in Limpopo.

“We want to be industry regulated, not government regulated,” said Ferreira. DM