Alex residents march to Sandton, determined to have the...

Alex residents march to Sandton, determined to have their grievances heard 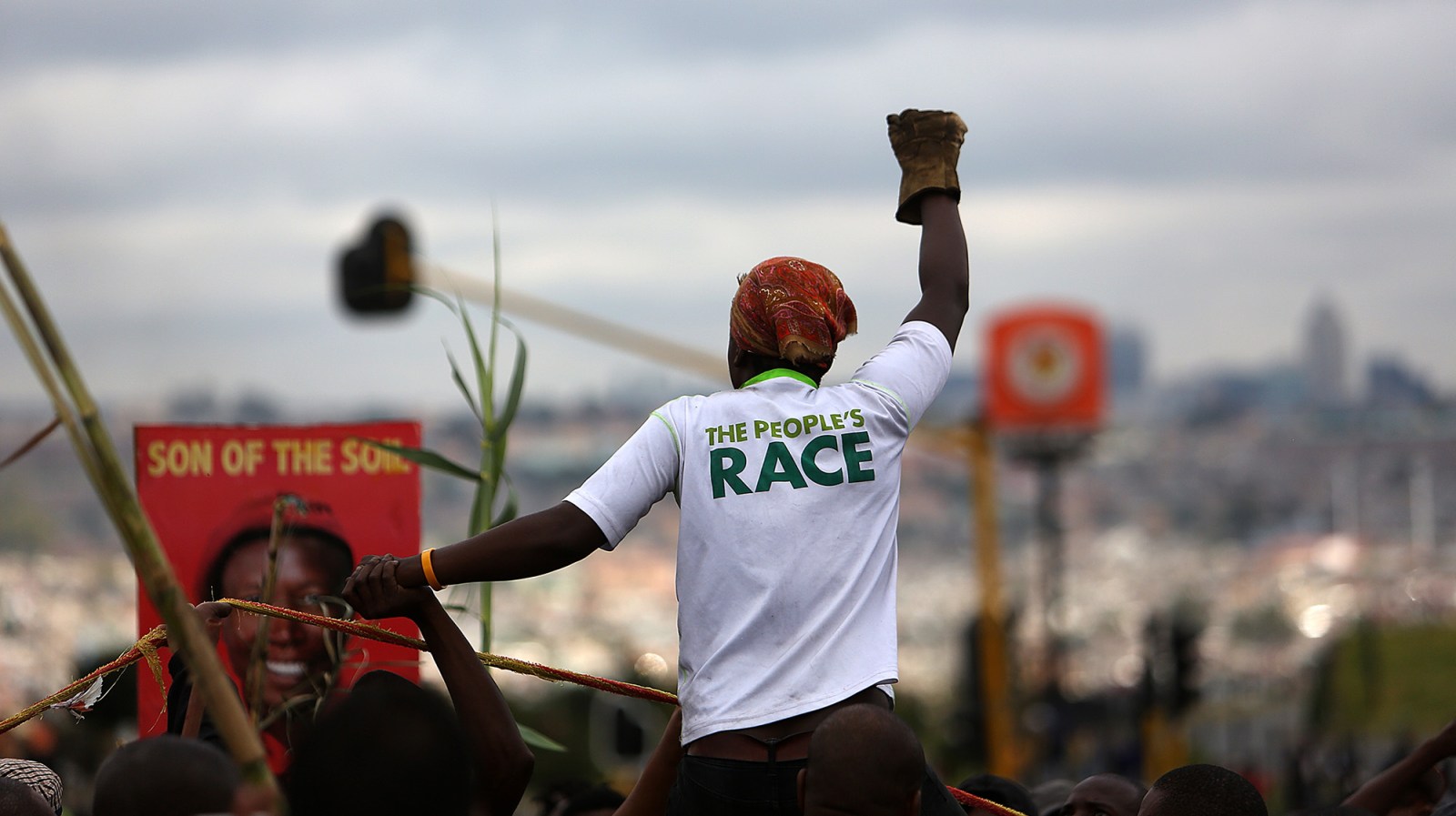 Residents of Alexandra protesting against poor service delivery bring the township to a standstill on 3 April 2019. On Monday 8 April residents marched to Sandton to deliver a memorandum of grievances to the Johannesburg municipal offices. (Photo: ALON SKUY)

After protests that began in Alexandra, Johannesburg last week, residents of the township braved the morning cold and rain on Monday and marched to Sandton to deliver a memorandum of grievances at the City’s municipal offices in the affluent suburb on Monday.

When protests began last week, Alexandra residents said if nobody was prepared to listen to their concerns they would march to Sandton and would not be ashamed to burn tyres along their journey.

On Monday, the march got underway, albeit a bit late, but no tyres were burnt as Johannesburg Metro Police confiscated them before protesters could set them alight.

“Nothing will deter us. All we want is to be heard and that something is done about the plight of the people of Alexandra,” protest organiser Sandile Mavundla said on Monday 8 April.

Johannesburg Metro Police Department spokesman Wayne Minnaar said the Alexandra residents’ march was an unprotected protest as organisers had not sought permission from the City to march.

“Notice must be served seven days prior to the protest, and if this is not the case the protest is an unprotected protest,” Minaar told Daily Maverick on Monday morning.

It took residents a little while to gather at the Multi-Purpose Centre in Alexandra because of Monday’s inclement weather. The march finally began with many angry residents claiming the ANC had ignored them for far too long and were now blaming opposition parties for their own failure.

“Come sunshine or rain, we are going to Sandton. This has been going on for far too long. We can no longer bear the arrogance from the ruling party who could have fixed Alexandra a long time ago if they wanted to. There is no political will to sufficiently improve Alex,” Resident Sy Mazibuko said.

The Alexandra protests have turned into a political football between the ANC and the DA-run local government, headed by City of Johannesburg Mayor Herman Mashaba. Both parties blame each other for the lack of development in the area.

Alexandra is one of the country’s oldest townships and one of the most squalid, despite being located a stone’s throw from high-end Sandton City. The community continues to battle unemployment, poverty, crime and poor services. Residents’ housing frustrations have been vented on foreign nationals who have been accused of being the cause of mushrooming squatter camps everywhere.

Many residents told Daily Maverick last week that they were holding on to their housing C-forms — while foreign nationals occupied houses intended for them.

Over the past week, the Alexandra protests have been widely labelled as politicking by the impoverished community. DA Gauteng chairperson John Moodey told Daily Maverick on Monday that Mashaba was willing to meet the area’s community leaders to resolve their complaints.

“He is scheduled to convene a public meeting during this week. The mayor is a caring person who has in two-and-a-half years in office done more for the people of Alexandra than the ANC in 23 years. On Sunday our premier candidate Solly Msimanga opened a case against the ANC for instigating this unrest. The ANC ward councillors apparently have a petition addressed to the council, but are refusing to hand it over to the mayor,” said Moodey.

Speaking to Talk Radio 702 on Monday, Gauteng ANC Deputy Chair Panyaza Lesufi said the DA’s obsession with ANC politics was blinding them. Lesufi said the people of Alexandra were not demanding anything but to see the mayor. He said the DA would not govern if it saw everything along political lines.

“Every time the DA has to deal with matters on the ground, they want to shift the blame to the ANC,” he told the station.

The march, which progressed under police guard, was peaceful despite a few hitches along the way. Police threatened to confiscate all tyres and other objects they considered dangerous. This led to a mini-confrontation, but the leaders of the march agreed that tyres could not be carried into Sandton. The march proceeded once the tyres were handed to police.

When the protesters arrived in Sandton there was an expectation that Mashaba would turn up to address residents, but a few hours after midday that hope dissipated when the City manager attempted to address residents. Chants of “who are you” burst from the crowd, who demanded that they be addressed by Mashaba.

The City manager was whisked away as residents continued the chants.

Meanwhile, there was no teaching in some schools in Alexandra as pupils were seen roaming the streets. Most said they had been turned away because of the strike. Residents said they would continue protesting until Mashaba heard them.

Gauteng Premier David Makhura is expected to visit the area on Tuesday. President Cyril Ramaphosa is expected on Thursday. DM