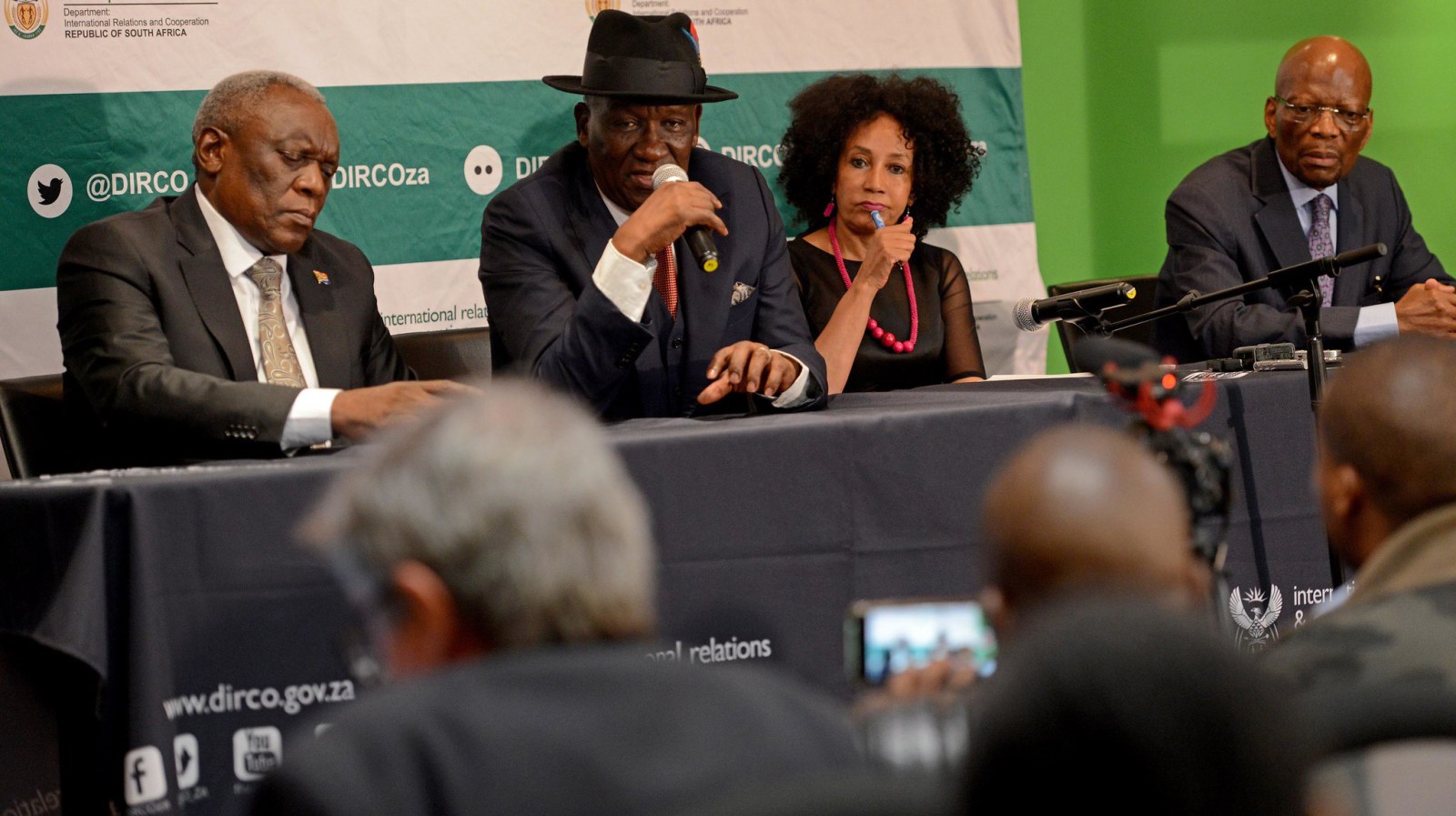 African ambassadors are confronted with all the crimes committed by their nationals in South Africa.

African ambassadors came to hear what the South African government intended doing about allegedly xenophobic attacks against their citizens. Instead, they were presented on Friday with a litany of crimes being committed by their nationals in South Africa.

Officially, they drank their bitter medicine. Their official spokesperson, DRC ambassador Bene M’poko, dean of the diplomatic community, said at a press conference after the ambassadors’ meeting with Ministers Lindiwe Sisulu of International Relations and Co-operation, Bheki Cele of Police and Siyabonga Cwele of Home Affairs: “Were there issues hard to hear? No! If we are going to tackle problems, we need to hear the truth, to get the facts so we get a better understanding of the causes.”

But privately, several ambassadors were dismayed by the meeting, though both sides also agreed to set up a joint standing task force of South African officials and African ambassadors to deal with attacks on foreigners, crimes by foreign nationals and other issues.

She announced at a press conference after the meeting that her department would launch a publicity campaign to “educate South Africans about how to live with the other”.

Sisulu also confirmed that she had written to deputy police minister Bongani Mkongi to take issue with xenophobic remarks he made in Hillbrow two years ago and which are still circulating widely on social media. The African ambassadors had asked Sisulu to instruct Mkongi to retract the remarks because they were still inciting xenophobia. Sisulu told Daily Maverick Mkongi should apologise for his remarks, “as they don’t reflect our views”.

She added that other political parties which promised to expel foreigners if elected in May were in breach of the Constitution.

Cele told journalists that Friday’s meeting had “not been easy” but had been necessary to gain a better understanding by all concerned about the reality.

Cele did not provide further details but one ambassador told Daily Maverick that Cele had told them that Nigerians were most involved in drug trafficking, Somalis in weapons smuggling, Zimbabweans in hijacking and rape, Malawians and Mozambicans in house robberies.

Another ambassador said that the problem was that Cele had not spelt out what percentage of these various crimes were committed by foreign nationals and what percentage by South Africans.

Therefore, he said, the statistics as presented were more likely to encourage xenophobia than to discourage it.

It was not made clear to journalists at the press conference exactly what the ambassadors were supposed to do with the statistics Cele had given them. It was the ambassadors who had originally asked for the meeting after the latest attack on Malawian nationals in Durban.

Sisulu said the meeting had been called to find ways of dealing with the “sporadic attacks on foreign nationals and to find a common way in which we can deal both with educating foreign nationals who are in this country around the issues which our people might feel sensitive about, and also asking them to assist us through their consular services continually engaging with their people”.

The ambassadors should “talk to their people… to convene their communities and say, look, this is a problem that has come up and this is the information that has come from the ministers, can we do it differently? If we work that way, finally we will get to a solution”.

The idea of informing the ambassadors about the levels of crime being committed by other Africans in South Africa seems to stem from a belief by the South African government that the periodic attacks by locals against foreigners are sparked by crimes committed by foreigners against locals.

Cwele said: “In many societies in our country, in many townships and informal settlements, there is no problem. It’s when the acts of criminality happen that we get these things flaring up.”

The ministers cited the recent attack in the Burnwood informal settlement near Durban on 26 March which had prompted the meeting with African ambassadors. The attack forced about 350 Malawians to flee their homes. Some returned to Malawi.

Officials said this attack was provoked by a Somali shopkeeper allegedly shooting dead two South Africans who attacked his shop in nearby Greenwood Park on 24 March 24. On the same day, a South African woman died when she fell through a roof while fleeing protesters in Kenville, also nearby.

But the link between the events is tenuous. Some media reports indicate that the Malawians in Burnwood were attacked instead because some Malawian residents had been accused of stealing goods.

Whatever sparked the Burnwood attack, it is even less clear what the causal link might be between the activities of Nigerian druglords, Somali gun-runners, Zimbabwean hijackers and rapists or Malawian and Mozambican burglars on the one side and xenophobic attacks on the other side. And what African ambassadors can be expected to do about it.

Gareth Newham, head of the Justice and Violence Prevention Programme at the Institute for Security Studies in Pretoria, said that tackling crime in South Africa was the responsibility of the South African government, not that of other governments.

“If former President Zuma had not severely weakened the criminal justice system through poor leadership appointments, we would all be safer.

“If we want co-operation from other African governments, we should be seen by them as allies, rather than adversaries who disregard the dignity of their citizens who come to South Africa whether as tourists, skilled professionals or economic migrants.”

There seems to be a clearer link between violence and competition for jobs between locals and foreigners. On 28 March protesters torched seven large trucks on the N3 highway near Mooi River. At least one of the motives seems to have been anger by South Africans at trucking companies for hiring foreign drivers.

At Friday’s press conference Home Affairs Minister Cwele said his department had met with trucking companies in Durban recently to urge them to obey the law by securing work permits if they employed foreigners. These would only be granted if the government established that no locals could do the jobs, he indicated.

He also said he had asked the ambassadors to help South Africa by preventing their citizens entering South Africa illegally and also by bearing some of the “significant” costs of repatriating them when they were caught without proper documentation.

M’poko said some African governments were already helping to pay for the deportation of their nationals from South Africa and the UN’s International Organisation for Migration was also paying for some flights.

He also said not all Africans who came to South Africa committed crimes.

That was why the African Union and the Southern African Development Community (SADC) had adopted policies to integrate the continent.

Sisulu defended the focus of Friday’s meeting on crime, saying that there had not been enough time to discuss other aspects of the issue such as the socio-economic causes of the “sporadic” attacks on foreigners. These would be dealt with in subsequent meetings.

At a previous meeting with the ambassadors on Monday, Sisulu had said the aim was to draft a “grand plan” to tackle xenophobia and criminality.

After Friday’s meeting, she said this was still the aim but it would take time. In the meantime, the task team agreed on at the Friday meeting – to comprise officials from her department, Dirco, the police and the Department of Home Affairs, plus two African ambassadors – would start to tackle the problem. There was no time frame, she said. The task team would meet until it had solved the problem.

Newham argued that South Africa would be worse off without foreign nationals.

“Politicians have three choices to make when it comes to the issue of attacks on African foreign nationals. Firstly, they can do nothing and ignore the problem, secondly they can say or do things to legitimate and encourage xenophobia, or thirdly, do or say things to prevent and stop xenophobia.

“Very few politicians in South Africa choose the third option because of the widespread xenophobic sentiment that currently prevails in the country.

“By focusing on crimes committed by foreign nationals, or that some jobs are allocated to foreign nationals rather than South Africans, our politicians are promoting and encouraging xenophobic attacks.

“This message needs to be made crystal clear by our top politicians. If not, these politicians will feed into the myth that our country’s crime problem is the result of foreign nationals, and whether they intend to or not, will encourage xenophobic sentiment that is at the root of violent attacks or threats of violence against African foreign nationals.

“Even if we closed the borders and removed every African foreign national in the country we would still have a very high level of violent crime. Similarly, we would still have an unemployment crisis and the world’s highest rate of inequality. As President Ramaphosa stated, foreign nationals bring important skills and abilities that we need and are an important contributor to our economy. We would be worse off without them.

“The problems facing the country are not as a result of foreign nationals, nor can foreign nationals be blamed for the government’s failure to solve them. Rather, the main problems facing the country are corruption and maladministration committed by South African political and business elites which, as a result, are not able to mobilise our vast resources productively.

“African foreign nationals are then made the scapegoats due to the lack of willingness or ability of the ruling elites to solve our many challenges.” DM