Why poor housing prices are a blessing in disguise

It’s a terrible irony. South African house prices, adjusted for inflation, are as flat as an ironing board and have been for around a decade. And that just may save us all the heartache at least some of the developed world faces as their residential markets come under pressure.

House values, reflected in prices, are at the heart of the economy, a fact underlined by the global financial crisis of 2008-9, which was sparked – though not entirely caused – by the reckless lending for housing and then the deflation of the US housing bubble.

South Africa clearly does not have a bubble now, unlike other countries that may be forced to sharply deleverage i.e. reduce debt when their housing bubbles pop, with a ripple effect through their economies. Experience has been that housing booms are almost always followed by housing busts – though timing the downturn is not always easy. Also, according to Morgan Kelly, the economist who famously predicted the bursting of the Irish property bubble before the global financial crisis, they are not soft landings and the fall is as precipitous as the surge was before it.

A look at Global House Prices, produced from the indices supplied by the St Louis branch of the US Federal Reserve, on real (inflation-adjusted) average house prices in South Africa tells our story. You may wonder why our house prices did not plunge further after the decade-long surge in the period before, from around 1997. Houses prices in Australia, similar to South Africa in being a commodity producer, continued to surge until fairly recently as shown by Graph 2 (House Prices SA vs Australia) where the difference has been accentuated by making the Y axis start at 80 rather than zero. 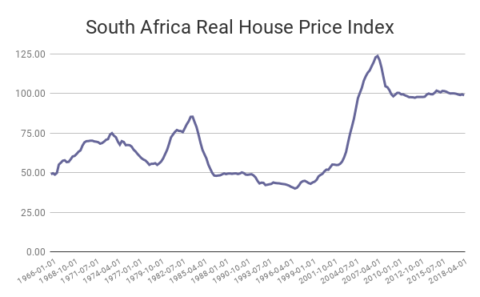 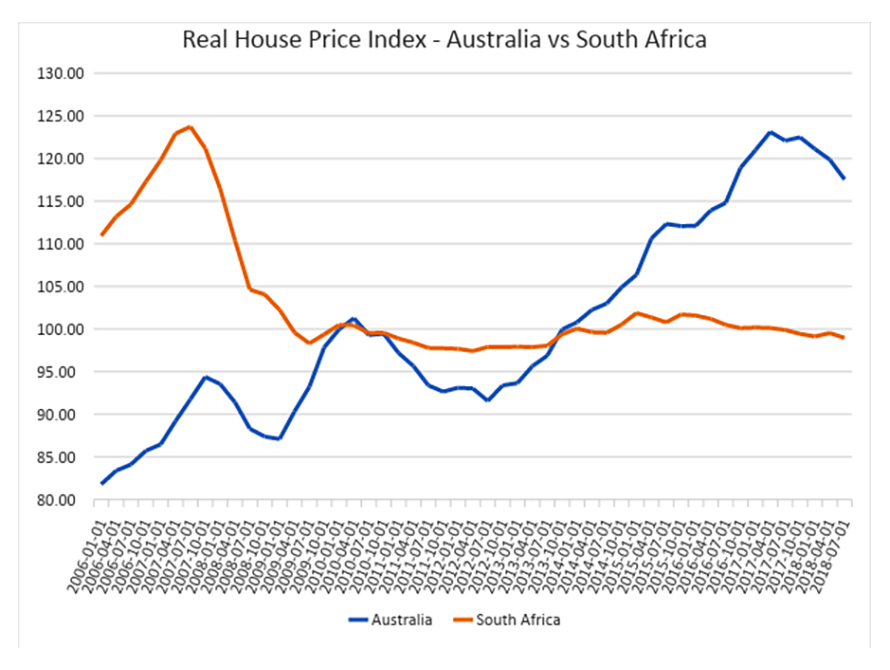 I can only surmise that severe political risk in South Africa weighed down property prices from the 1980s right through the transition to democracy. For example, to use personal experience, we bought our house in the early 1980s at a bargain price because the owners were emigrating to escape the coming violent revolution.

In the politically turbulent and economically depressed 1980s in South Africa, white people used to joke that either South Africa had the most expensive cars in the world or the cheapest houses, because the prices of motor vehicles seemed exorbitant when compared to the cost of housing. As an investment house seriously underperformed. In the early 1990s a friend told me she was considering selling her house, putting the money from the sale into the JSE, and renting. After 1994 it took a few years for confidence to return to the market and it gradually climbed.

When the property bubble burst around 2007, pricked by higher interest rates, prices fell to levels that probably reflect fundamentals such as demand from a growing population, the amount of new housing supply, economic performance and interest rates, four key determinants of house prices, according to UK government research. Other drivers are various and could include foreign investment, mortgage availability, regulation and tax distortions.

The South African housing market is relatively clean of regulatory distortions. Rent control was abandoned in the 1980s, when it was seen to be impeding construction of new housing, especially apartment buildings.

The country also was never beguiled into adopting Mortgage Interest Deductions or MID, which allow bond repayments to be deducted from tax. These may seem like a good idea, but they divert too much money from productive investments into the housing market. The UK government, among others, discarded the MID in 2000 and other European governments more recently have too.

It’s hard sometimes to distinguish between investment and speculation, but widespread speculative buying seems to have largely been squeezed out of the housing market, since speculation relies on “the prospect of substantial gains”, according to Investopedia. An exception could be Cape Town (see box). Some wealthier areas may offer speculative prospects, but it seems less of a national problem than an inadequate supply of housing for the poor.

So it is perhaps surprising that the ANC in its election manifesto promises to “accelerate legislative measures to eliminate speculative behaviour” in the property industry. The manifesto describes housing prices as too high. The party says, it “will introduce measures to address high land and property costs”. This is true in the sense that there is an affordability problem for buyers in the low-income, often informal, market but not for buyers, certainly at this stage, in the formal housing market.

What would change the overall market and the lives of poorer homeowners is the formalisation of the former black townships and the so-called RDP housing market i.e. the houses given by the State to poor people. This would end the dual-speed housing market and enlarge it significantly.

It stands to reason that giving people houses affects house prices in the lower-income market, because it is logical to wait for a free house rather than buy one. That is not the only reason the low-income market is not working well, as has been pointed out by Kecia Rust, Executive Director and founder of the Centre for Affordable Housing Finance in Africa (CAHF). The research done by CAHF shows that an enormous amount of dead capital could be unlocked through formalising the largely informal and inefficiently operating low-income markets.

The ANC manifesto promises to achieve what will in time help the housing market in South Africa, and that is to reduce the backlog of registrations in the deeds office of around 88,000 title deeds. This would be a start in enabling those and other poor people to access the capital in their homes, especially to climb the property ladder, though more needs to be done.

Growing the housing sector through formalisation would grow the economy – without creating a bubble. A bubble may develop in time. What could create a bubble, without doubt, is artificially low-interest rates. This is when key interest rates like the prime are kept well below the inflation rate – the phenomenon of negative real, i.e. adjusted-for-inflation, interest rates. It then becomes imperative to borrow rather than save and to convert cash into investments, including hard assets like real estate, that do not lose their value.

South Africa has not had negative real interest rates since the Reserve Bank under Dr Chris Stals asserted its independence from the Treasury and began, in the 1990s, to prioritise fighting inflation. The ANC’s promise to nationalise the Reserve Bank and to change its mandate, seen in isolation, do not necessarily signal the kind of policies that would again see negative interest rates and galloping inflation in response to calls for low-interest rates. Political interference by those emboldened by the nationalisation, however, might turn back the clock to the property booms and busts of previous decades. DM