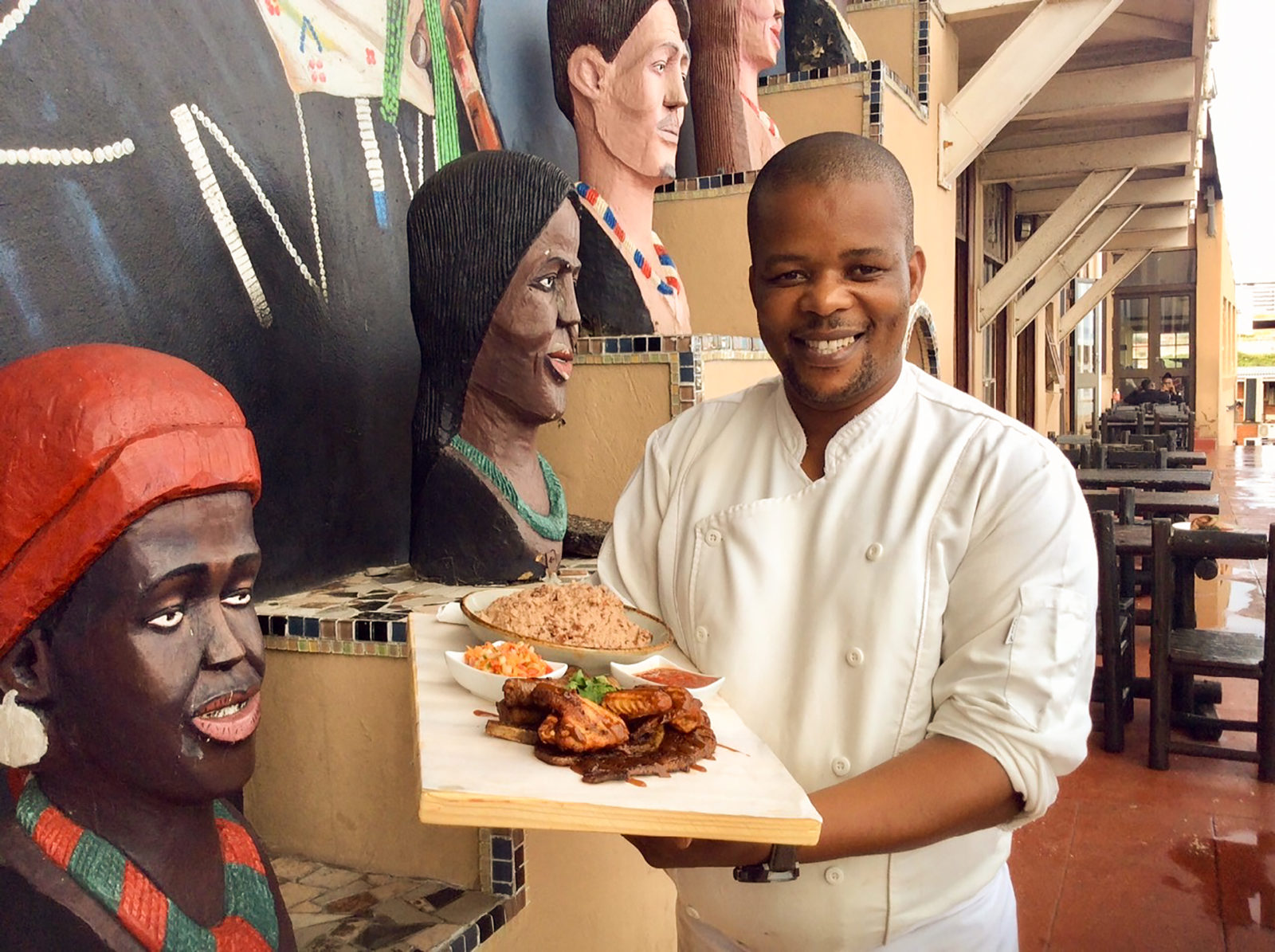 Take a fine-dining chef with excellent culinary credentials and passion for sharing Zulu heritage cuisine. Take an iconic harbour-side hub that once ran on a mix of euphoria and hope. Can art, music, some active refurbishment and enthusiasm – and the chef, through the universal language of food – draw people back?

In this order: the urbane 42-year-old spent his first two post-college years honing his professional skills, sea legs and sense of adventure in the kitchens of an 11-deck, 3,500 guest Royal Caribbean cruise liner he joined in Puerto Rico. He attributes visits to Mexico City and Acapulco at least in part for his enthusiastic Mexican-flavour palate.

This was followed by four years as head chef at a luxury Highveld game lodge where it was fine dining at its most exclusive and sometimes a celebrity clientele. Putting ostrich, eland, kudu, duck and quail on the menu was commonplace and “it wasn’t unusual to spot a lion at the gate; an elephant just outside, or a mamba along the path to the kitchen”.

Ngcobo topped this with a rich, rewarding, varied and versatile 12 years spent cooking for ambassadors, diplomats, politicians and royalty (civil rights activist Jesse Jackson and King Goodwill Zwelithini were among many memorable guests) when he ran the kitchen and the house for three successive US consul generals in Durban. Fourth of July parties, home-away-from-home Thanksgiving feasts, visiting US delegations, working breakfast and lunches – you name it, he catered it, cooked it and plated it beautifully.

First consul general was Jill Derderian, an avid cook and fellow Mexican cuisine enthusiast. She’d give him recipes to challenge him — and hard-to-come-by ingredients like dried chillies, corn tortillas and special salsas. Then there was Taylor Ruggles, who didn’t mind too much what he ate. Followed by Frances Chisholm, who loved nothing more than to get her hands dirty digging in the garden at weekends, planted veggies and herbs and became a good friend and mentor.

During her diplomatic time in Durban, the US consular household was known for its fine table. Ngcobo regularly got standing ovations for his fare.

Not a bad run of career highlights. Especially if you consider that it all started way back when, as an Inanda township teenager, Ngcobo got a job as a cleaner in a bakery to help support his family after his dad died. He saw friends drifting into crime, realised he needed a qualification and, with only enough for a deposit, enrolled at ML Sultan for a culinary/hotel school course.

Ngcobo put his self-esteem on the line and tried door-to-door sales to buy his uniform and chef’s knife – before the bakery owner helped him secure a night-time job at Durban’s Hilton Hotel. There he quickly figured out: “I loved being in the kitchen.”

One of the many things he learned during his US-linked years was “you can bet that any politician in a senior position is truly health conscious in how they eat”. With carefully chosen good ingredients and flavour being key.

Durban’s BAT Centre, once upon a time, was the city’s hippest, hottest, most happening place to go with friends to eat, drink, make merry, debate the meaning of life, solve the world’s problems and all those other things one engages in when lubricated by a fusion of food, wine, friendship and good vibes.

Back in the day at the BAT Centre – which opened in August 1995 “in the interests of the development of arts and culture for all South Africans”, as a weathered plaque donated back then by Nedbank reminds us – there was art, and there were working artists making and selling art. There was music. You would sit almost on the deck of one of the pilot boats, berthed spitting distance from you in the harbour. There were the golden sunsets.

More than anything, for greater Durban and tourists and those not hands-on engaged in the running and creative side of things, there was the lure of the food. Several top-operator restaurateurs including Billy Budd of Legends and Prawn Shak fame, which some will likely remember or know, opened with fanfare and tried to make a go of it in a location that, while right in the city, people – even then – saw as off-the-beaten-track, says Budd.

While there was always the bar, the BAT Centre has typically attracted a crowd more Bohemian than moneyed.

These days there is still art. And working artists making and selling art. There is music. There’s poetry and there are events. There’s training, development and job-creation going on. The pilot boats are still there, often dwarfed by an enormous RO-RO cargo vessel spilling its guts of vehicles or guzzling new ones for their ocean journey.

There are the gentle-to-dramatic liquid sunsets and night-light working harbour reflections: more accessible here than from any other dining spot in Durban.

There’s even safe parking, given the number of harbour police on duty along the narrow road near the Maritime Museum where one parks.

But over the years the iconic BAT Centre lost a lot of its spark as a community hub. This for reasons including no big-picture city vision and limited to non-existent city support. Plus, some of the vibrant side-wall murals that shouted a welcome on arrival have been covered with layers of drab khaki, BAT Centre’s inspired hands-on creator and Phansi Museum founder, Paul Mikula, laments.

And the biggie: no culinary drawcard for a l-o-n-g time. Which, as we all know, is a guaranteed kiss of decline if not death – food being that universal language.

Given all this, it feels auspicious, for Durban, to know that Chef Sandile Ngcobo has opened Café Chidos, his African-themed, Mexican-inspired (chido translates as awesome), Durban-focused (yes, there are bunnies) eatery in the familiar BAT Centre restaurant space that flanks the bar.

While I talk with him and, later, to long-time BAT Centre director (I want to say “saint” given the uphill of running a non-profit community venue in Durban), Nise Malange, there is a band rehearsal in progress. Prior to the reverb and blare, there was cool recorded jazz.

When it opened, BAT Centre was a symbol of the spirit and energy of the time (think post-apartheid and Nelson Mandela for shorthand), says Malange.

“It was built on a wave of excitement and euphoria that reflected the hope and enthusiasm of those days.”

Funding came from money left by Hugo Bartel (BAT=Bartel Arts Trust) – persuaded by Mikula: “The genius who created the space in many cases using ingenuity and waste,” says Malange. Mikula still consults: most recently suggesting a sculpture garden for an al fresco downstairs area where a metal security fence was erected a few days ago by harbour authorities.

But, says Malange, BAT has just completed some necessary upgrades (non-city funding) including a theatre/hall revamp, new windows, and the art gallery.

“The city needs to come to the party,” says Mikula.

“They need to put up a big visible welcome sign. (Budd said this too.) And millennials need to get involved. There needs to be a “refreshing” rather than a refurbishment.”

But enough about the politics.

The BAT Centre is still vibrant and an artsy gem. Inside and out front, the spirit, euphoria and energy that “built it” is as vital as ever.

And Ngcobo and Café Chidos have given new reasons to visit.

Heritage cuisine is what culinary travellers want when they visit a city or country. Zulu comfort food is what many who frequent BAT Centre like to eat. And having made three visits with three different groups since I heard Ngcobo had opened there, it transpires there are many adventurous eaters willing to be surprised and impressed when they know a master chef is choosing the ingredients and creating the flavours.

So yes, he has fish and chips on the menu. And bunnies and curries for those who want tasty – less exotic – fare. And when someone asked for something Mexican, given the café’s name, he produced a non-menu nachos starter plate that did the Tex-Mex tradition proud.

But most noteworthy is the African food: mainly Zulu.

They’re the dishes he learned to love when he was growing up and they were prepared by his gran and his mom. His slow-cooked tender and flavourful inhloko (ox cheek) served with imifino and dumplings. “The head is the specialty when you slaughter an ox,” he says.

At home he would debone the animal himself. For the restaurant he shortcuts: to the appropriate cut.

“You braise it slow and long. Five hours, usually,” he says. Softening all those muscles well-exercised from chewing the cud.

His Zulu tripe, served with steamed bread or dumplings, is another time-consuming dish to make. And when you suspend judgement, like most offal well-prepared by a fine chef anywhere in the world, it’s a treat to eat.

“With the tripe the secret is to wash, wash, wash and then cook it slow, adding carrots and onions to make the soup.”

His isithebe platter of meat: chicken wings, boerewors and beef steak, seasoned with ground spices he selects and mixes himself and cooked shisa nyama style, comes with feathery light pap, chakalaka and a tomato relish he makes using chillies picked from his mom’s garden.

His Zulu lamb chops are grilled, tasty, and served with corn and sweet potato cooked on an open fire.

“I plan to add cornbread soon,” he says. “My gran would wrap it in banana or corn leaves before putting it on the fire. I plan to go and ‘borrow’ her grinding stone when I have some time, to do it from scratch.”

Inter-generational. The sharing of heritage, tradition and cultures. This chef likes nothing better than a seafood platter washed down with a tasty white blend on a special occasion. Or Zulu comfort food.