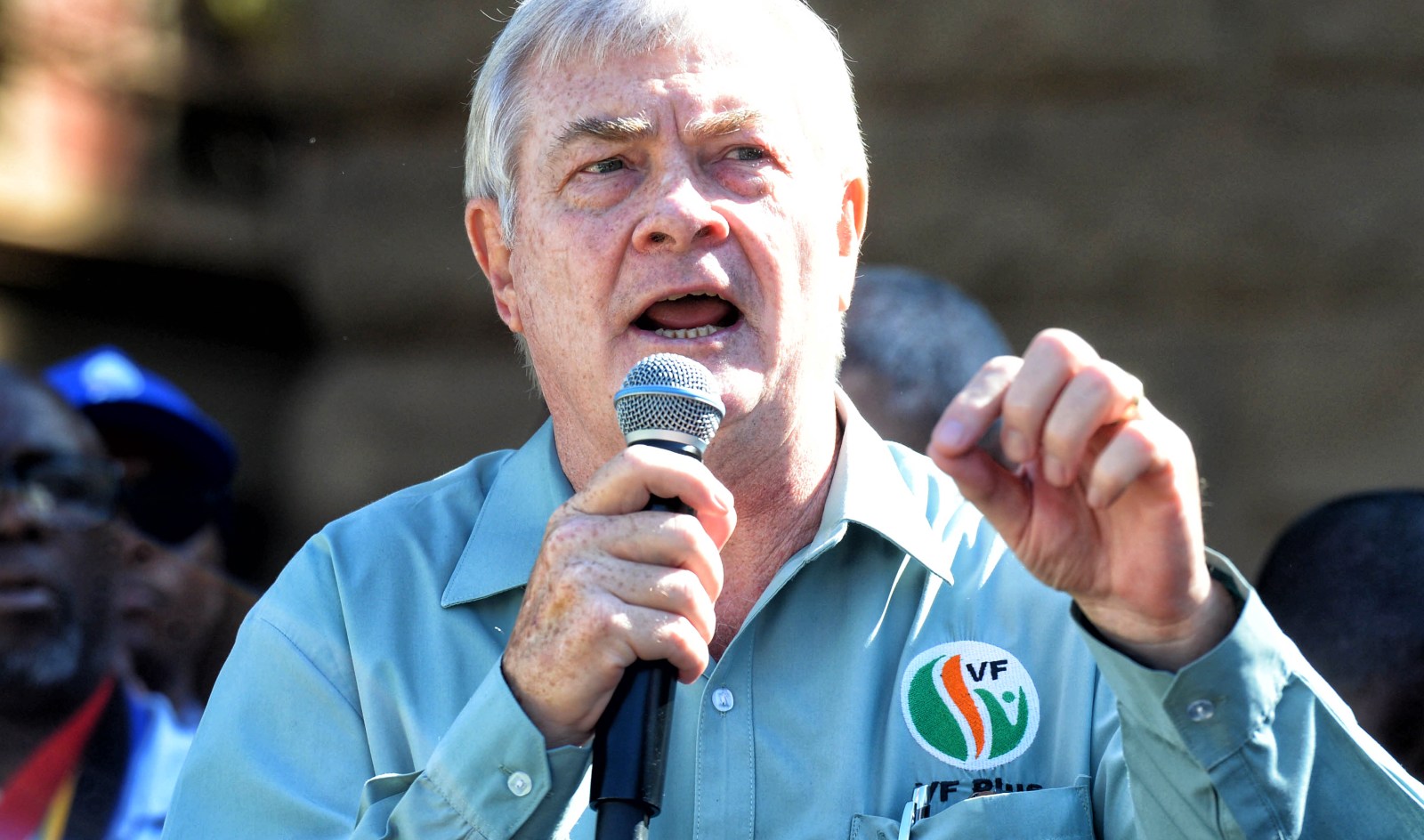 Freedom Front (FF) Plus leader Pieter Groenewaldt addresses the crowd during a march to handover a memorandum to National Treasury demanding that the fuel levy be decreased by at least R1 on July 31, 2018 in Pretoria, South Africa. (Photo by Gallo Images / Netwerk24 / Deaan Vivier)

The Freedom Front Plus and Black First Land First going to head-to-head in court has been put on hold after the withdrawal of the case from the Electoral Court’s roll on Thursday. The FF+ withdrew its case on a ‘technicality’, saying it would rather do this than jeopardise the whole case.

“The land thieves have chickened out,” said the president of Black First Land First (BLF) Andile Mngxitama on Thursday, outside the South Gauteng High Court where the Electoral Court was sitting.

“We told them that we would defeat them in court, in Parliament, and in the street and take their land,” he said.

Mgxitama’s comments come after the Freedom Front Plus (FF+) failed to arrive at the proceedings, where both parties were to have presented their arguments before the Electoral Court.

The FF+ case is based on the argument that the Independent Electoral Commission (IEC) contravened the law by registering the BLF as a political party despite the organisation running under a constitution that encourages racism and racial polarisation.

The FF+ believes that despite its withdrawal, it has a strong case.

The party said it had withdrawn the matter on the basis of a jurisdictional and technical argument which “does not fall within the merits of the case, but within jurisdiction”, said Wouter Wessels, FF+ head of elections.

According to Wessels, they were supposed to appeal to the IEC before taking BLF to the Electoral Court.

Wessels argued that the commission failed to follow the process when the BLF registered as a political party in 2016 in that the IEC did not gazette the registration as is legislated and had “argued that we are going to the Electoral Court straight because there was no time and because this was an extraordinary matter”.

The case revolves around the BLF constitution, and that the IEC registered the BLF as a political party despite its constitution being discriminatory.

According to the FF+, the party had written to the chief electoral officer of the commission on 17 January 2019, alerting the IEC that a publicly available version of the BLF’s constitution from the party’s website stated that only black people may be members of the BLF.

This, it said, was in contravention of the Electoral Act, which states that the IEC is not permitted to register a political party that excludes people on the basis of race, colour and ethnicity.

Wessels said he had a conversation with the IEC on 13 February, during which he was informed that the BLF’s website constitution and the constitution it handed in to the commission when they registered as a political party were being compared.

Wessels said the FF+ then submitted a Public Access to Information Act application to the commission asking it to “please provide us the constitution as submitted by the BLF”. When this was provided to them on 13 March, the FF+ found that the two versions were the same.

It is on this basis that the party believes “the chief electoral officer did not act lawfully when he registered BLF”.

On Monday 1 April, Wessels said, the party had lodged an appeal with the IEC regarding the unlawful registering of the BLF. The commission has seven days to respond to that appeal, said Wessels.

But a defiant Mngxitama was unperturbed outside the court on Thursday.

“They are shivering and shaking in their colonial boots,” he said.

“We arrive here ready to fight, ready to defeat them, and they have run away,” Mngxitama said.

Mngxitama referred to the FF+ as criminals who stole the land and that they were “terrified that BLF is going to Parliament”.

“When we arrive in that Parliament, we are going to make sure that land is given to black people,” he said.

Wessels says they are not afraid.

“We want to be 100% sure that there are no technical arguments that might compromise this case because our merits are very strong.”

Wessels said that it was opportunistic of the BLF to have gone to court on Thursday to make a media spectacle, when they already knew about the withdrawal at the weekend. DM