#WhereIsAzory: Still no trace of Tanzanian journalist missing for 500 days 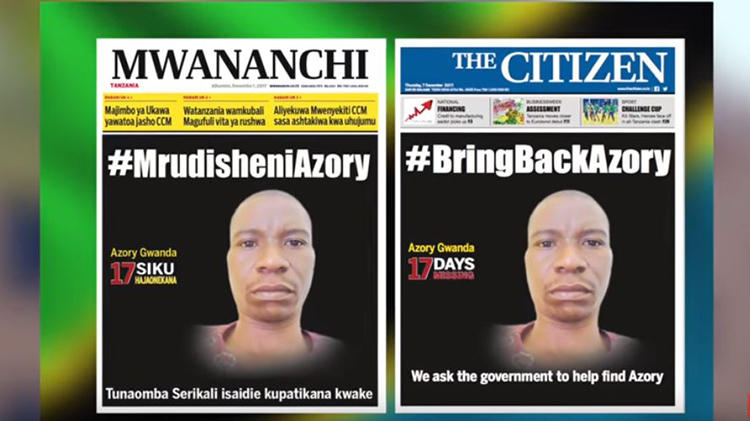 Tanzanian freelance journalist Azory Gwanda has not been seen for 500 days, and his family and friends fear the worst. Prior to his disappearance, Gwanda had exposed the murders of over 40 people within a two-year period. The Committee to Protect Journalists has now launched the #WhereIsAzory campaign to draw attention not just to Gwanda’s case but the problem of diminishing press freedom in Tanzania in general.

Those are the only known facts associated with the disappearance of 42-year old Tanzanian journalist Azory Gwanda.

Gwanda was last seen by his wife Anna Pinoni when he asked her for the keys to the home they shared after being picked up by four people she did not recognise in a white Land Cruiser.

“Gwanda told her that he had got an emergency trip and promised to be back home in the evening or the following day,” according to a statement from Tanzanian media company Mwananchi Communications, for which Gwanda freelanced.

When Pinoni returned to her home after work, “she suspected that there was some sort of inspection or search carried out in the house as things in the house were turned upside down”.

Gwanda has not reappeared since, and his phone numbers have been inactive since the day he left.

The Committee to Protect Journalists (CPJ) has been trying to draw attention to Gwanda’s disappearance ever since. Although Mwananchi Communications told the CPJ that “the company did not have enough information to link Gwanda’s disappearance to his work as an investigative journalist”, there are suspicions that reporting carried out by Gwanda may have played a role.

Journalism academic Bob Wekesa has previously written about the work undertaken by Gwanda prior to his disappearance, which focused on a mysterious spate of murders which began in 2015 in the Pwani coastal region of Tanzania.

Gwanda produced almost weekly reports on the murders, whose victims over a two-year period numbered more than 40 and included “local politicians, government officials, policemen and residents”, according to Wekesa.

The freelance journalist had reported that the murders had shaken authorities, who claimed at one stage that foreigners were responsible as part of an attempt to cause civil unrest.

“The murders reported by Gwanda included those of police officers, up to 12 of them, including the local head of criminal investigations,” Wekesa wrote. “Faced with the perplexing challenge, the police resorted to summary execution of suspects, harassment of residents and imposition of curfews, as reported by Gwanda. At some point, the army was called in.”

Gwanda’s wife has said that she believes her husband’s disappearance is in some way connected to his reporting on these murders. But this claim was initially dismissed by Tanzanian authorities, with Home Affairs Minister Kangi Lugola suggesting at one point that Gwanda may have absconded due to family problems.

Police have failed to make evident progress in investigating Gwanda’s whereabouts. Adding to the sinister atmosphere around the case are the events of November 2018 involving CPJ representatives Angela Quintal (a former editor of the Mail & Guardian) and Muthoki Mumo.

When Quintal and Mumo arrived in Dar es Salaam on 10 November 2018, as part of a visit to engage in dialogues with Tanzanian journalists over press freedom, the two were apprehended by government agents who interrogated them for several hours over matters including their interest in the Gwanda case.

The ostensible reason for the detention of Quintal and Mumo given by Tanzanian authorities was that the two lacked the appropriate visas – a charge denied by the CPJ.

April 4, 2019 marks 500 days since the disappearance of Gwanda, and the CPJ has launched a social media campaign – #WhereIsAvory – intended to put pressure on Tanzanian authorities to “carry out a credible investigation and publicly account for his fate”.

The CPJ says that Tanzanian journalists and media outlets fear retaliation if they publicise Gwanda’s case too vocally.

A statement from the organisation said: “(Gwanda’s) disappearance comes amid declining press freedom in the country, including government-ordered media shutdowns, fines, restrictive regulations, and arbitrary arrests of journalists.” DM