‘Tis the season of political defections and last-minute endorsements 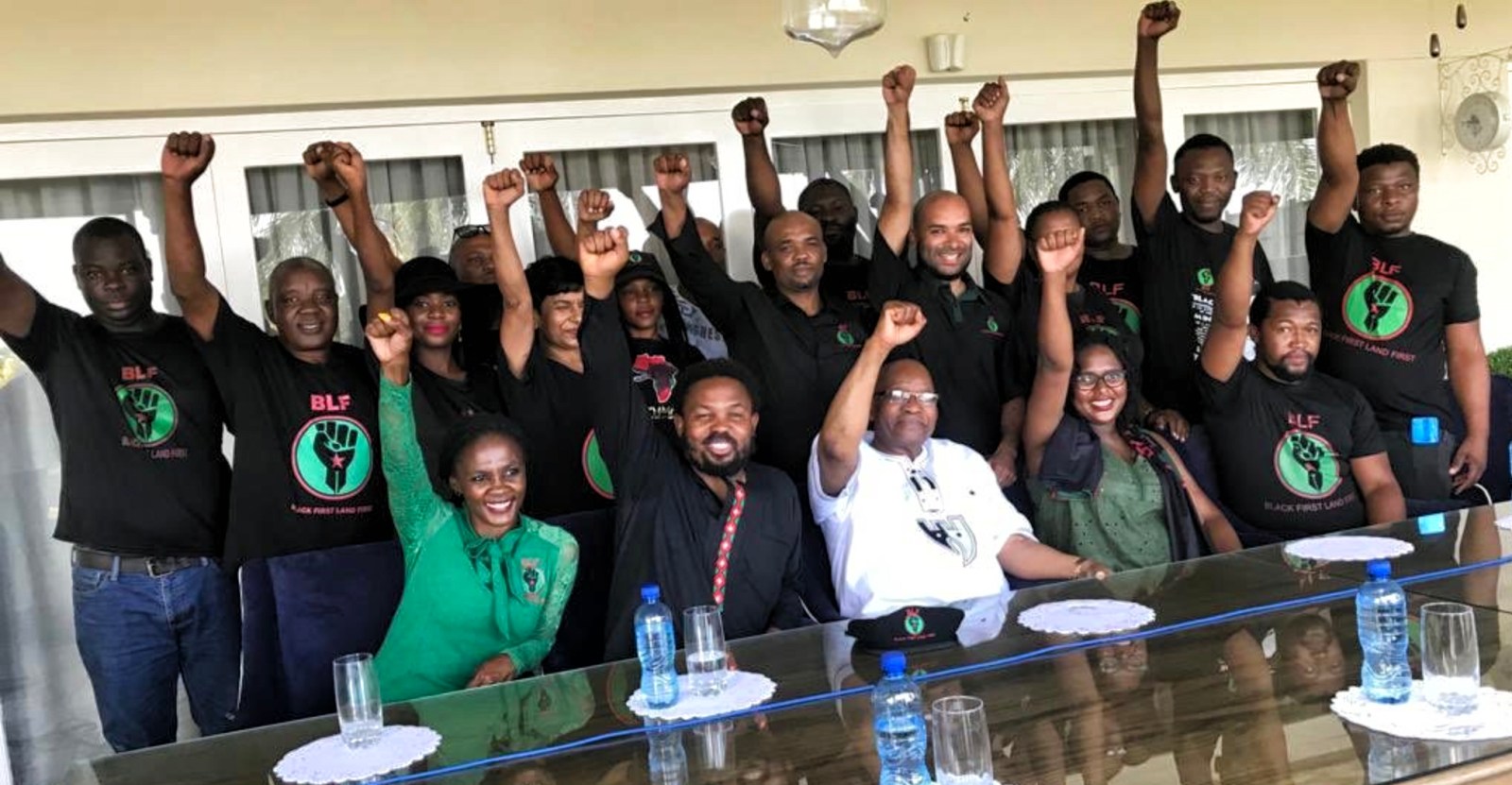 BLF meets Zuma: BLF’s leadership tweeted this picture of uBaba being visited at his Nkandla home by a BLF delegation wanting nothing more than “to formally thank him for Radical Economic Transformation”.

Jacob Zuma is posing for photos with BLF. Zindzi and Zenani Mandela are posing for pictures with the EFF’s Dali Mpofu. Vytjie Mentor has joined the ACDP, and ward councillor defections are happening thick and fast. The usual tumult of the South African political fray is stepping up a notch, which can only mean one thing: the election countdown has truly begun.

Less than six weeks to go till the national polls, and South African politics nerds are studying Twitter the way medieval seers inspected animal entrails to divine the future.

If Jacob Zuma is posing happily with the central command team/total membership of BLF, what does it mean?

If scions of the Mandela family are pictured in a warm embrace with the EFF’s Dali Mpofu, what does it mean?

If the ANC’s Derek Hanekom tweets, à propos of the Ace Magashule alleged corruption-fest, that he is “not prepared to simply dismiss all the allegations as lies”, what does it mean?

Are these social media emissions evidence of seismic political shifts to come? Or are they just… tweets?

It doesn’t help that nobody ever seems willing to elaborate on their gnomic Twitter utterances.

After Dali Mpofu posted a photo of his visit to Zindzi and Zenani Mandela, along with an excited remark gesturing towards the sisters’ imminent defection to the EFF, he then declined to comment to The Sowetan on the basis that the meeting was “private”.

But not private enough to keep off social media, obviously.

Zindzi Mandela subsequently retweeted Mpofu’s post, together with his prediction that “these two voters are… almost in the bag??”, so she obviously isn’t about to sue him for libel. But since we’re now treating retweets as mystical portents, it’s time to take a deep breath and step away.

Does it matter if Zindzi and Zenani Mandela vote for the EFF? Their votes count for the same as any other two South Africans’ votes. If the sibling duo isn’t willing to step up and issue any kind of confirmation, they can hardly be used as campaigning fodder by the EFF beyond Mpofu’s enigmatic tweet.

Even if the sisters gave a very public press conference nailing their colours to the EFF mast, it’s impossible to know whether what is effectively a celebrity endorsement could affect the polls in a significant way. South Africa is not America, and even Beyoncé couldn’t swing things for Democrat candidate Beto O’Rourke in Texas in November 2018.

In a desperate attempt to bring some gravitas to this discussion, Daily Maverick asked four esteemed local professors of politics whether there was any precedent in South African politics for a celebrity endorsement impacting the polls.

To call Zindzi and Zenani Mandela “celebrities” is not an attempt to demean them; it’s just one potential solution to the problem of what to call people who are not political figures in their own right, but are household names as a result of their genetic political affiliations.

Zindzi Mandela is, admittedly, the current South African ambassador to Denmark, but there is no requirement that ambassadors be current or former ANC members – as evidenced by the fact that several DA politicians have bagged ambassadorial roles.

The symbolism of Mandela’s children turning their backs on the ANC for an opposition party, were that to be confirmed, would probably be seized upon with glee by international media and used as the basis for countless think pieces about the demise of the Rainbow Nation – but would it actually sway anyone’s vote?

After all, Winnie Madikizela-Mandela had a close public relationship with EFF leaders prior to her death, but nobody seems to have suggested that this caused a spike in the EFF’s showing in by-elections in recent years.

If Zindzi and Zenani Mandela have decided to vote EFF, good for them. They are not on the ANC candidate list and hold no positions in ANC decision-making structures, so unless they decide to go on the road with Julius Malema, the political impact of their unconfirmed allegiance-switch is probably roughly equivalent to Siya Kolisi hinting that he’s considering the DA.

Next? Next is Jacob Zuma, whose renaissance in the public consciousness has been achieved largely via whatever social media genius has been hired to manage the former president’s Twitter account. Whoever that person is, they deserve a salary on a par with Nafiz Modack’s body double: having singlehandedly transformed South Africa’s most ruinous post-apartheid kleptocrat into a lovable Twitter uncle fluent in just the right quantities of internet snark.

This week Zuma was trending due to someone else’s Twitter account rather than his own, for once, after BLF’s leadership tweeted pictures of uBaba being visited at his Nkandla home by a BLF delegation wanting nothing more than “to formally thank him for Radical Economic Transformation”.

In the accompanying pictures, Zuma is beaming merrily while giving a black power salute alongside the BLF leadership collective, who are also beaming merrily. Clearly, a good time was had by all.

There are decent reasons for us to take political events involving Zuma somewhat seriously: the persistent rumours of “deep state” plotting by the former president and his allies, as well as his formerly tight grip over the security cluster.

But Zuma is much too clever a politician to throw his lot in with the minnows of the BLF. As someone who has previously revealed himself to be world class at looking out for Number One, he has far bigger fish to fry. In all likelihood, Zuma indulges photo-ops with Andile Mngxitama and his pals for exactly the same reason that any of us would consent to be fawned over by much younger people who think you’re tops: because it makes him feel good and sends a message to the world that he’s still popular and relevant.

Zuma being Zuma, we should not discount the possibility that he also uses such opportunities to whisper information into Mngxitama’s ears that could damage his political rivals in some way. But what exactly could Mngxitama and his tiny party achieve for Zuma that the former president could not achieve more effectively by whispering information into vastly more significant ears?

If anything, we should be worried about the meetings Zuma holds that we don’t hear about on Twitter. Let’s find it in our hearts to be happy for Mngxitama and Co, because it’s always special to spend some QT with a personal hero.

Next? The next development requires us to take faltering steps outside the world of social media.

IRL, this is the season not just of ambiguous political photo-ops but also of bona fide political defections, which have been coming thick and fast this year. If some of them have slipped your mind, that is understandable. The only two political “names” involved in the floor-crossing frenzy thus far have been former ANC MP Vytjie Mentor, and former DA KwaZulu-Natal provincial leader Sizwe Mchunu.

Mentor has gone to the ACDP; Mchunu to the ANC. Technically, calling Mentor’s move a “defection” is pushing it a bit, since she says she hasn’t been an ANC member since 2017.

Mentor appears to be one of many South Africans around the country who the ACDP claims are “spontaneously finding the ACDP”, to quote party campaign manager Grant Haskin. While unexpectedly coming across the ACDP might be unnerving to someone of a less conservative Christian bent, Mentor has declared that she “expects to thrive” in her new party.

As evidence, Mentor has since used her Facebook account – once a must-read for anyone hungry for jaw-dropping allegations of State Capture delivered at fever pitch – to post a picture of her reading the Bible in bed.

Mentor spontaneously found the ACDP so late in the game that she is not on the party’s parliamentary list. ACDP leader Kenneth Meshoe says this is proof of Mentor’s pure intentions – “it just shows her heart” – but it also means that the party cannot promise that a vote for the ACDP will put Mentor in Parliament, which seems to somewhat dilute the bragging rights that normally accompany a high-profile new recruit.

The DA’s Mchunu, meanwhile, jumped ship to the ANC after a longstanding leadership feud with current DA KZN leader Zwakele Mncwango and his stated dissatisfaction with the direction taken by the party. For its part, the DA says that Mchunu and three other party councillors who defected with him had all failed to make the DA’s candidate list – which, to be fair, does amount to a tremendous incentive to tell your former employer to get stuffed.

Mchunu and Mentor are just the best-known drops in the defection ocean: barely a day goes by now without a political party heralding an arrival from their rivals as incontrovertible proof that the faultlines of local politics are fundamentally shifting.

Yet reading into the political movements of individual ward councillors is about as reliable as treating Dali Mpofu’s Twitter feed as the Shroud of Turin. Impending elections are much more likely to see politicians casting about frantically for their best ticket to continued employment than they are to witness a sudden epidemic of ideological awakenings or crises of conscience.

These are uncertain days. With six weeks to go, time to inhale deeply and fight to cling on to any vestige of sanity. DM