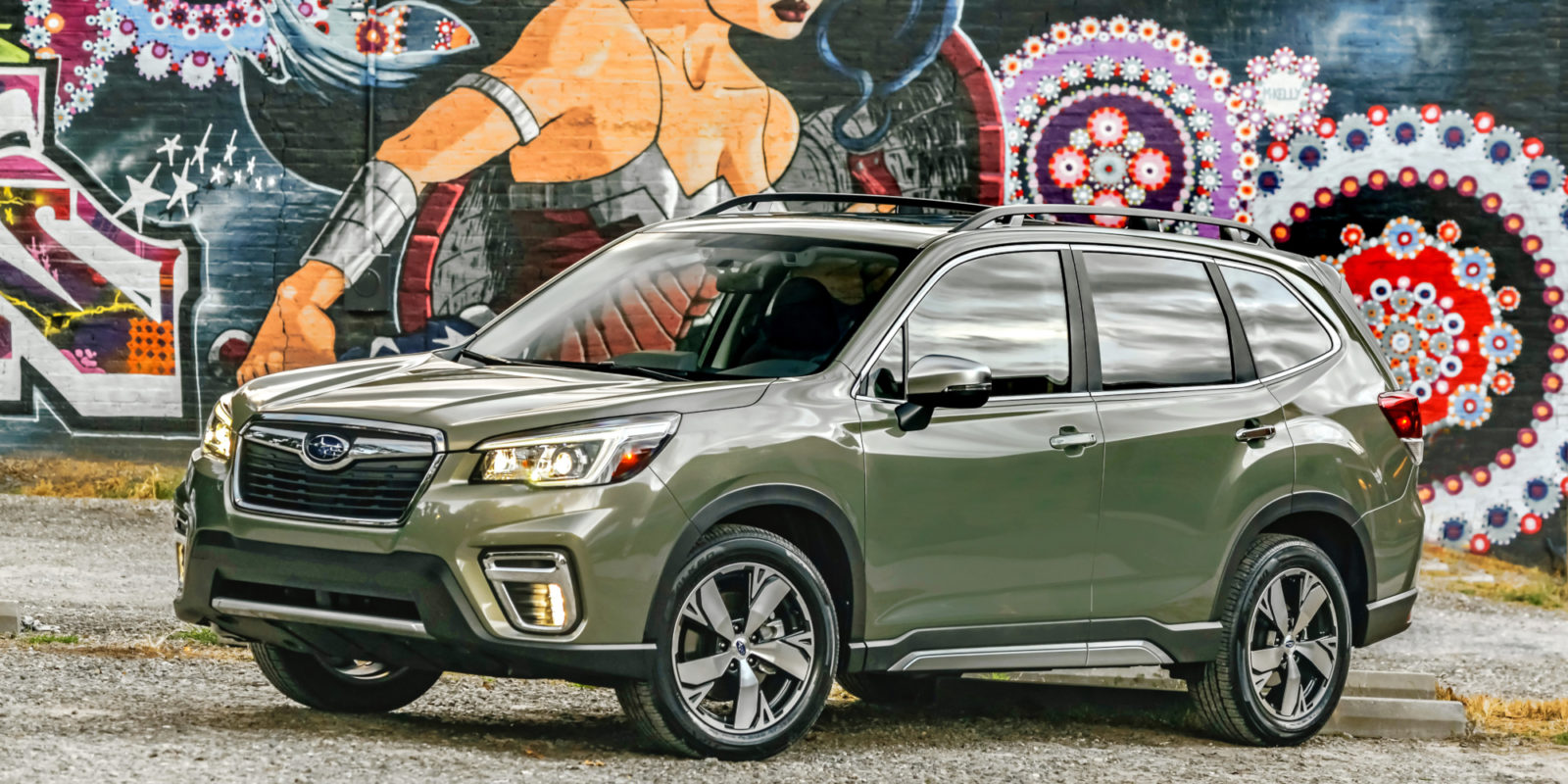 The Subaru Forester pre-empted the compact SUV movement long before it became fashionable. This latest, all-new version brings a new platform and a smart and spacious interior to the Forester party – but it desperately needs more poke.

Subaru owners are considered a little left of centre, mainly because the brand has a reputation for producing somewhat unconventional vehicles.

Some of those have attained legendary status: the Impreza WRX and STI models, for instance, have established an enviable reputation on the world’s race and rally tracks. The more modest Forester is no less popular, but for very different reasons.

The compact all-terrainer brought the versatility and practicality of compact SUV motoring to the market long before the big names jumped onto the bandwagon, establishing a loyal and satisfied customer base in the process.

The Forester has always been known for its angular, no-nonsense styling, its flat-four “boxer” engine linked to a very effective all-wheel-drive system, and a well-packaged interior with a level of tactile quality well ahead of Japanese mass-market brands.

It also comes as no surprise that the Forester has typically lived up to its all-terrain promise more credibly than most of the wannabes in this segment. That’s thanks to its highly effective symmetrical all-wheel-drive system, linked to good ground clearance.

In short, the Forester is a tried and trusted package, and while Subaru has become more adventurous in recent years (the XV crossover comes to mind), an all-new Forester was never going to mess too much with what has clearly been a winning formula. 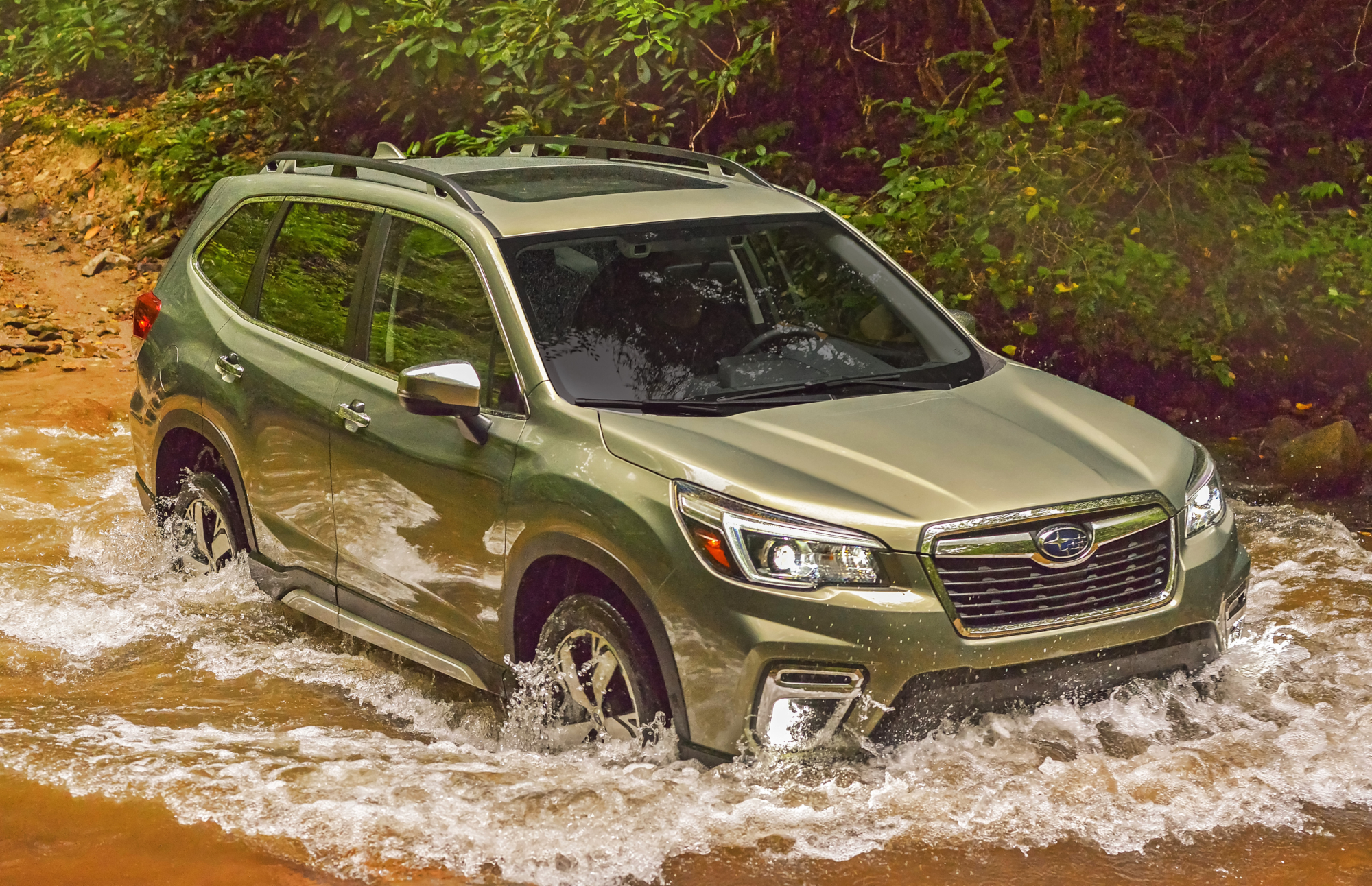 Thus, despite being a completely new model, sitting on Subaru’s equally new global platform, this new-generation Forester is instantly recognisable, even if it is markedly larger than before.

Yes, the lines are a little edgier, and the contours more pronounced, while a bolder front grille and commensurately larger headlights underscore a more pugnacious front end. Add18-inch alloy wheels shod with all-terrain tyres, plus quite a lot of brightwork, and the Forester remains handsome in a functional, sober kind of way. 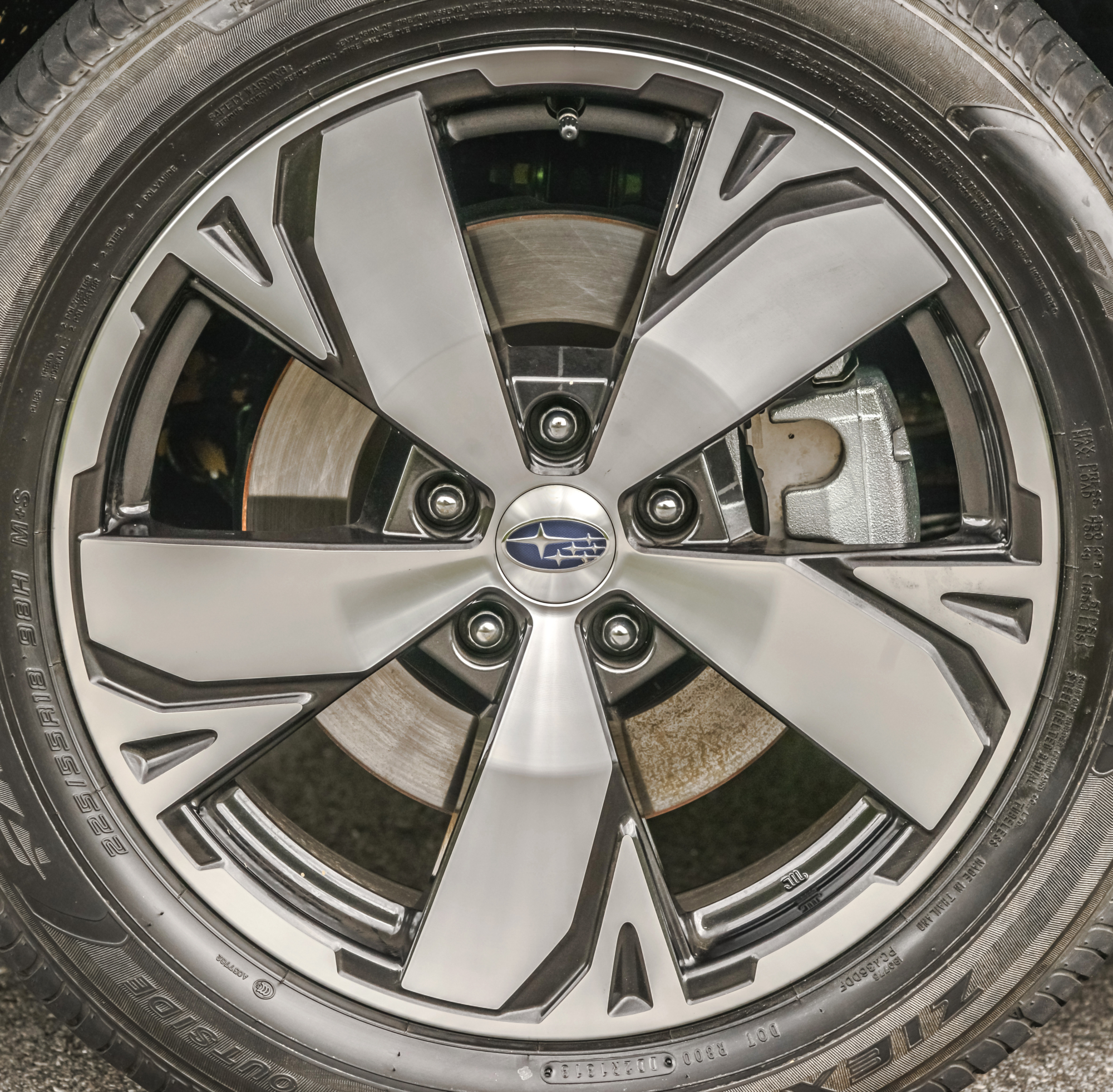 The interior is arguably the biggest beneficiary of the new platform. For an ostensibly compact SUV, there’s plenty of space front and rear, while the luggage compartment now swallows 520 litres of cargo with the split rear bench seat in place.

The packaging is excellent, and the materials just fancy enough to add to the cabin’s feel-good factor without becoming too grand. Perforated leather upholstery, textured metallic accents, soft-touch surfaces and plenty of standard kit make for a pleasantly executed and comfortable interior.

As has become the modern motoring norm, the centre stack gets a bright, full-colour touchscreen which acts as the nerve centre of the Forester’s infotainment system. It works with Apple CarPlay and Android Auto, and offers a nicely intuitive interface, augmented by voice command capability.

Sadly, the rest of the layout isn’t as ergonomically successful, with a lot of switchgear splattered around the cabin, some of which isn’t easy to find: witness the pre-collision braking and lane departure warning buttons tucked away in a roof-mounted console next to the sunroof slider switch, for instance …

There’s a heavily populated multifunction steering wheel, a conventional control set for the climate control and audio system, and more buttons to the right of the steering wheel, on the driver’s side armrest, and in the centre console.

In addition to the touchscreen, there’s also a vehicle information display on top of the centre stack which is more useful than it sounds, while the refreshingly clear, round analogue dials for speed and rev count frame a digital trip computer.

Yes, a more cohesive ergonomic approach would have been welcome, but at least the switchgear is clearly marked, and generally intuitive to use – once you’ve worked out where everything is.

This flagship model has all the bells and whistles one could hope for, with highlights including multi-speaker Harman Kardon sound, a glass panoramic sunroof and Subaru’s much-vaunted Eyesight safety system.

The latter uses dual cameras located in a pod close to the interior mirror mount to provide a host of driver assistance features. It pre-emptively recognises potential hazards and not only warns the driver, but can also actively intervene, for instance by applying the brakes to prevent a collision.

This latest Forester is offered with only one drivetrain, linking a normally aspirated 2.0-litre engine to a Continuously Variable Transmission – or CVT for short. As it turns out this combination is the Forester’s Achilles heel.

The power unit continues Subaru’s flat-four “boxer” configuration, and is credited with 115kW of maximum power, linked to 196Nm of torque. In practice, however, the engine’s peakiness, especially at altitude, makes for an underwhelming performance. 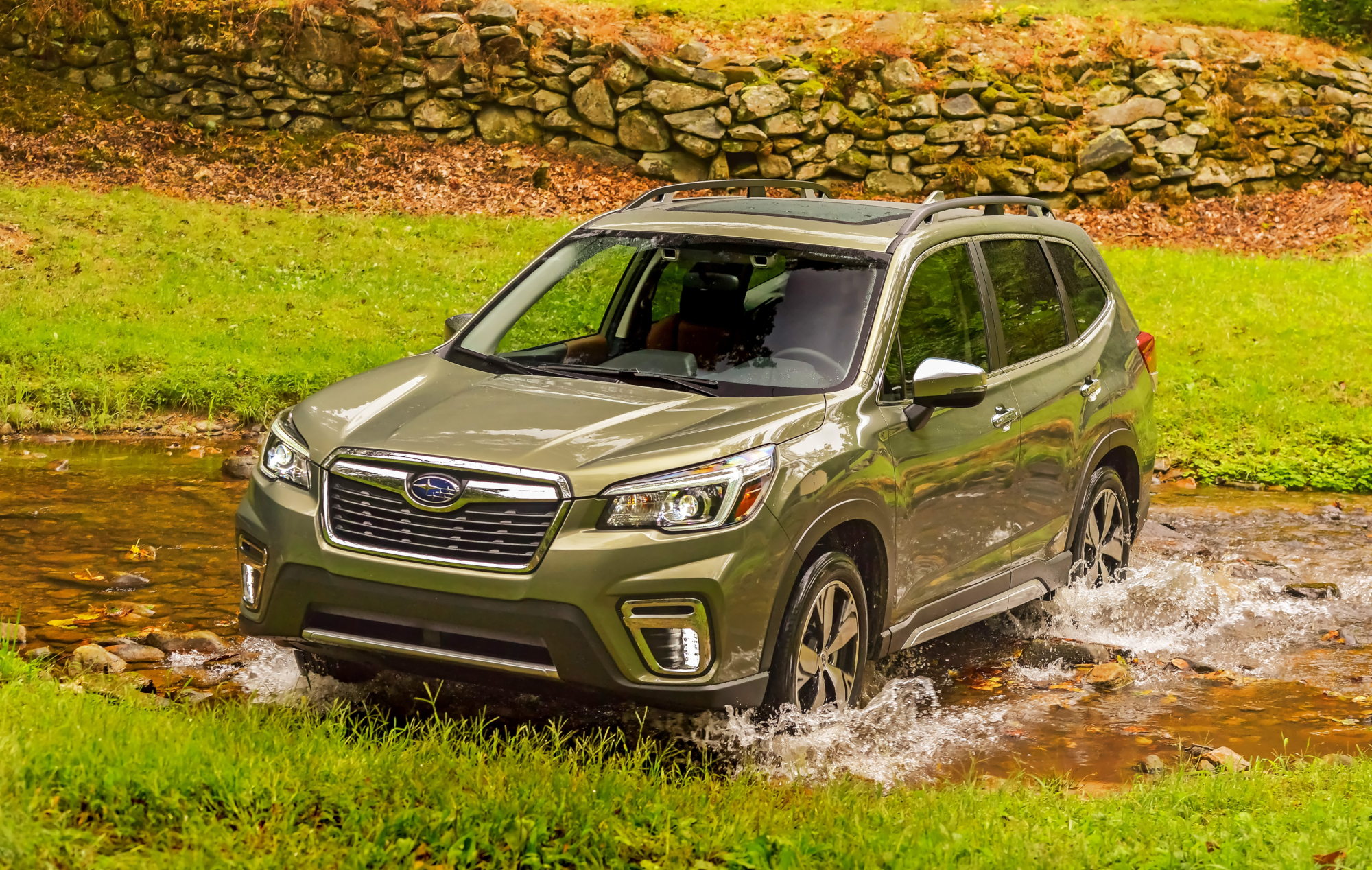 It’s likely to be less prevalent at sea level, but at Egoli’s lofty 1,600m height, the power unit runs out of breath far too easily, and needs a lot of prompting from the accelerator to deliver its performance goods.

As a result, the CVT has to work so much harder to keep the engine in the power band, which brings out the worst in an otherwise well-sorted example of current CVT technology.

Still, the transmission’s seven “virtual” gears are usefully arranged, while shift paddles make for welcome manual intervention and resulting engagement. If only it has more urge to play with!

The overall result is wheezy and underwhelming, and one can’t help but think that the Forester deserves better – not necessarily because of brand’s performance reputation with its WRX and STI models, but because more urge would make it a more user-friendly and enjoyable machine on tar and dirt.

Talking of which, this latest Forester continues to shine in the rough stuff. It’s no gung-ho bundu basher, but by softroader standards it’s a proficient all-terrainer that is happy tackle even challenging gravel, treacherous gulleys and chassis-twisting undulations.

The excellent 220mm ground clearance, linked to ample suspension articulation, ensures confident progress in the rough stuff, while the all-wheel-drive system works seamlessly. The result is sure-footed progress on surfaces many softroaders might be hesitant to traverse.

For the most, however, the all-wheel-drive system goes about its business with unobtrusive efficiency, allowing the driver to concentrate on the road ahead.

Some might feel that the Forester lacks a measure of ride comfort. On-road, it translates in tauter steering responses and tidy cornering at the expense of compliance, and perhaps some extra road noise.

Off the beaten track, those trends become more marked – but regardless of the conditions, I personally preferred the direct feedback from the chassis, even if meant sacrificing some plushness in ride refinement terms.

There is so much to like about this latest Subaru Forester that its shortcomings become more glaringly obvious than is perhaps fair. It’s spacious, superbly equipped, competitively priced, and impressively capable over a wide range of terrain.

All this latest Forester needs is a bit more shove – and with the global trend favouring turbocharging, a force-induced engine (petrol or diesel) just makes so much more sense. Get the powertrain right, and what is already a competent package would become even more enticing. DM

Loads of space and lots of kit. Strong safety feature suite, too. More all-terrain talent than most soft-roaders.

Deserves a more muscular drivetrain. The ride could be more refined.