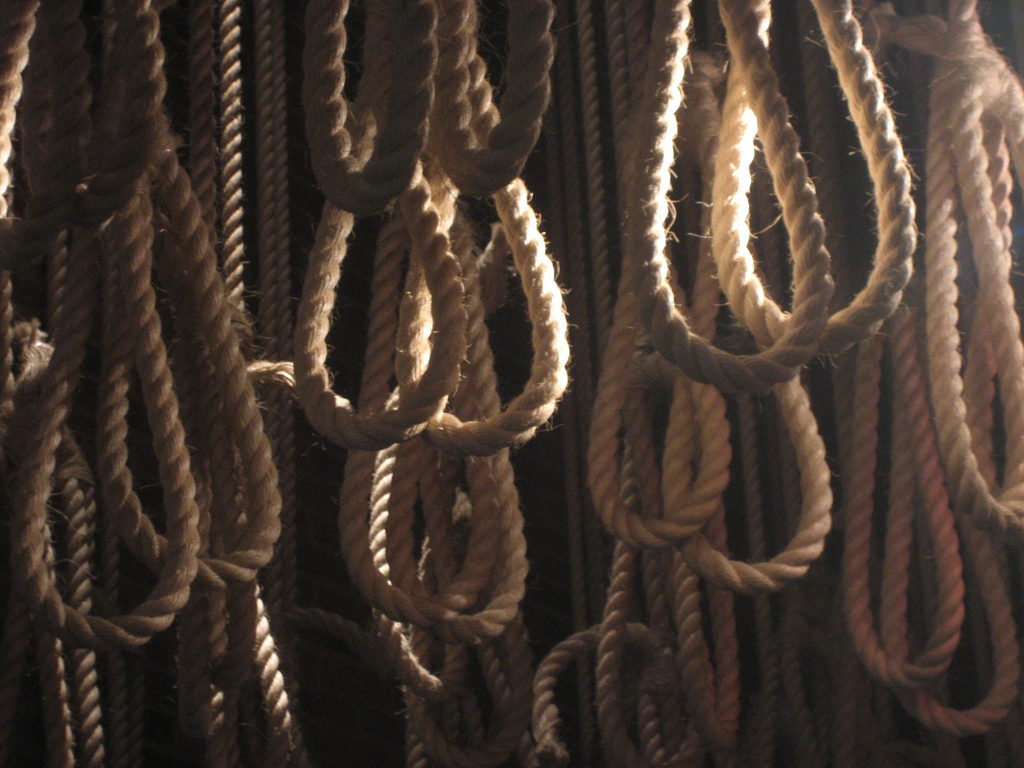 Nooses at the Apartheid Museum in Johannesburg. Photo: ccarlstead on Flickr, used under Creative Commons.

Politicians are once again trying to use capital punishment to get votes.

As the general election approaches, some politicians have once again called for the introduction — or, as the Inkatha Freedom Party puts it, the reintroduction — of the debate on the death penalty.

Violent crime is at the forefront of many a South African’s mind, and talk of its prevention and punishment gets headlines. But politicians, looking for attention, frame the debate by making false claims and inciting moral panic.

Politicians owe the electorate a debate grounded in fact. They are also bound by the Constitution. Misleading citizens, who are deeply fearful of violent crime, with selective information and false promises is unethical, exploitative and irresponsible.

Whether the death penalty leads to a decrease in violent crime is an empirical question. Almost all of the research in this area has centred on the United States. To date, there is still no conclusive evidence that there is any relationship between the death penalty and the murder rate.

While in the past there have been studies claiming that such a relationship does indeed exist, these have been swiftly negated, leading the US National Research Council of the National Academies to conclude that:

This position is supported by numerous research findings that harsher penalties have no deterrent effect on crime, and that imprisonment, overall, is a poor method of preventing or reducing crime.

Support for the death penalty is based on a fundamental misunderstanding of criminal behaviour and the instrumental value of a criminal justice system in a modern democracy.

Criminality is mostly a product of socialisation; it is learned and it can, therefore, be unlearned. But the death penalty perpetuates the violence that society is trying to prevent. As Justice John Didcott in S v Makwanyane said in 1995:

“South Africa has experienced too much savagery. The wanton killing must stop before it makes a mockery of the civilised, humane and compassionate society to which the nation aspires and has constitutionally pledged itself. And the state must set the example by demonstrating the priceless value it places on the lives of all its subjects, even the worst.”

The death penalty removes any chance of rehabilitation and reintegration into society; it erases the potential in people for change and redemption.

However, if a majority of the population do indeed want to exact revenge on criminals in this way, we need to consider why, and what options have been presented to them.

A referendum would be irrelevant

And how would they respond if shown that more than likely the death penalty will be applied with the same racial and class biases it had during the apartheid legal order?

And would the electorate vote for politicians to support the reintroduction of the death penalty if they knew that a public referendum would have no bearing whatsoever on its reintroduction?

In the Makwanyane case, the Constitutional Court interpreted the rights to life, dignity and equality to mean that the death penalty is fundamentally incompatible with our constitutional democracy.

Conveniently missing from the politicking of parties such as the Inkatha Freedom Party and African Transformation Movement, is the hard fact that the reintroduction of the death penalty would require a challenge to a long-established and fundamental Constitutional Court judgment, and possibly an amendment to the Bill of Rights (something which can only be done with a two-thirds majority), both of which are unlikely to succeed.

The evidence is there, and it has been there for decades: The death penalty is not a quick fix and it does not cure crime. Every time politicians avoid confronting the complex truths about crime and punishment, we lose a vital opportunity to examine what it will take to ensure real safety for everyone. DM

Clare Ballard writes on behalf of LHR, Sonke Gender Justice, NICRO and CALS. These organisations, along with others, are members of the Detention Justice Forum, a civil society coalition, comprising NGOs and individuals seeking to ensure that the rights and well-being of those who are detained are protected and upheld. To find out more about DJF and partner organisations visit the Detention Justice Forum.

Opinions expressed are not necessarily those of GroundUp.