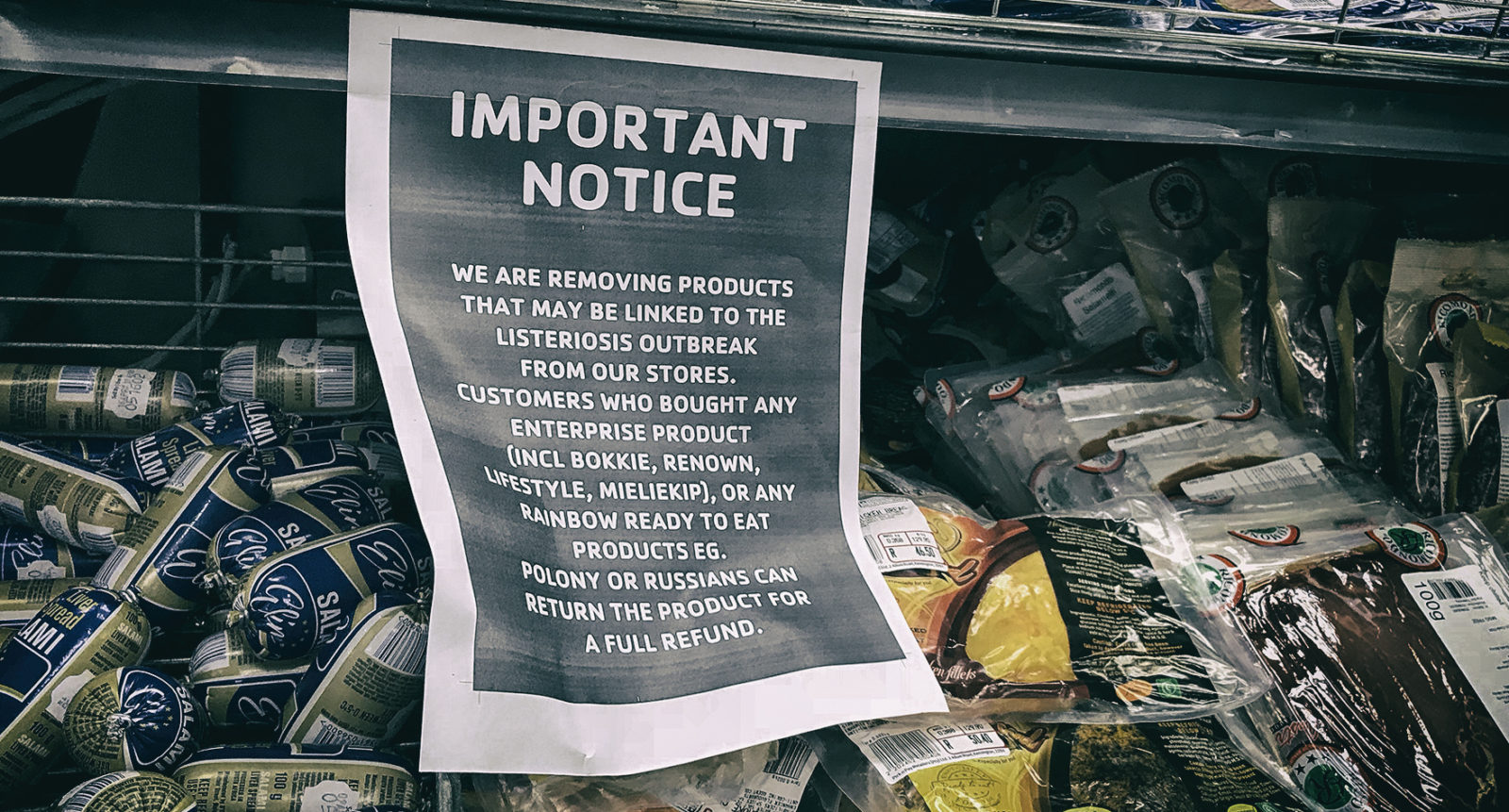 A sign to inform customers is placed over the processed cold meats section of a supermarket in Cape Town, South Africa, 05 March 2018. EPA-EFE/NIC BOTHMA

The 2018 listeriosis outbreak in South Africa was one of the biggest in the world, claiming more than 200 lives. However, that was just the beginning as some continue to deal with the aftermath of the deadly infection. Now the courts will be asked to hold the makers of processed meat products accountable. In only the second class action lawsuit to be heard locally, 1,060 complainants are demanding justice from Tiger Brands.

“As I watched the heart monitor going down, down, down, I don’t know what was happening in my brain, but it wasn’t registering that I was going to lose my son now,” recalled Vuyani Moledi.

“I literally saw him take his last breath.”

Moledi, who was seven months pregnant at the time, went to a regular clinic appointment on 7 December 2017. While there she expressed concern to the nurse that her baby had not been moving, which was an unusual occurrence. After being assured that everything with the baby was fine, Moledi returned to the apartment she shares with her mother in Phuthaditjhaba, a town near the Drakensberg mountains in the Free State.

Once back home, she went to rest as it felt like her “head was about to explode”. Moledi then woke up in the early hours of the morning on 8 December 2017 and began having contractions.

After five hours of labour, she gave birth to her son, Favour, at seven that morning. He was premature, severely underweight, at 1.3kg, and unable to breathe. After the doctors stabilised Favour, he was put into an incubator and transferred to another hospital.

Moledi, who was still recovering from childbirth, changed hospitals with her son and would visit him every two hours. The next morning, 9 December, Moledi’s son was moved into the neonatal ICU and had his blood drawn for testing. However, he did not survive long enough for the results to come through.

By 3am on 10 December, not even two days after being born, Favour was dead. It wasn’t until a week later that Moledi found out the cause of her son’s death — listeriosis.

At the time, Moledi’s was the only case of listeriosis in the QwaQwa region of the Free State and as such, she was not tested for the bacterial infection. The source of the outbreak had still not been identified, causing Moledi to continuously go over what she had eaten to possibly cause the death of her child. It was only three months later, in March 2018, that Enterprise ready-to-eat meat was recalled from stores nationwide and she finally got her answer.

“I was angry that I had to lose my child over food I ate, over a brand I trusted,” Moledi told Daily Maverick.

“It’s so expensive, you don’t expect expensive food to kill you or kill the ones you love.”

While not part of her regular diet, Moledi found that during the pregnancy she craved salty food — particularly Enterprise polony, viennas and Russian sausages. She would purchase these products from a Shoprite branch close to her apartment. Her daily meals quickly changed to include Enterprise meat products, with the sausages becoming part of her breakfast and the polony going in her afternoon sandwich. All those products were thrown out after she discovered that they had caused the listeriosis outbreak.

Moledi’s story is not unique. In January 2017, South Africa saw the beginning of the worst listeriosis outbreak in recorded global history. By the end of the outbreak, in September 2018, more than 1,000 people had been infected and more than 200 had died, at least 70 of whom were children. Gauteng bore the brunt of the epidemic, with 59% of listeriosis cases.

The bacteria which caused the outbreak was traced back to an Enterprise factory in Polokwane, Limpopo. The factory produced ready-to-eat meat products, such as those eaten by Moledi. Tiger Brands closed down three meat-processing factories, including the one in Polokwane, in March 2018 after detecting listeria in the products. By December 2018, all factories had been reopened and the products have returned to supermarket shelves.

After losing her son, Moledi struggled with severe depression and searched for different ways to cope with the trauma. In December 2018, after seeing an ad on TV, she contacted Richard Spoor Attorneys to join a class action lawsuit against Tiger Brands, the manufacturers of the Enterprise meat products.

This is only the second class action case in South Africa to be certified and progress to court. The previous class action, also represented by Richard Spoor Attorneys, against 32 gold mining companies was settled for R5-billion in 2018.

Before the case can proceed to court, there needs to be an “opt-out period” whereby people can choose not to join the lawsuit. This is because the class action lawsuit automatically represents everyone affected by the outbreak.

The required opt-out period concluded in early March, with only three people choosing not to join the class action. The case, which presently represents 1,060 people, is expected to begin next week. The case will be filed with the South Gauteng High Court, as the Tiger Brands head office is in Johannesburg.

Tiger Brands will have 20 days after the case is filed to respond and can then announce if the company will oppose the case. When contacted for comment, a Tiger Brands representative told Daily Maverick that the company was following the legal process, but could not comment on what its response will be until the documents are filed with the court.

The lawsuit has been narrowed down to represent four key groups:

“We know nothing can be done to undo the wrong that has already occurred, but we can make it better by Tiger Brands owning up to their wrongs and compensating people adequately,” said Thamsanqa Malusi, lead attorney for the class action.

Moledi says she joined the class action because she wants accountability for the death of little Favour.

“I’m just hoping that Tiger Brands can take some responsibility and that we get justice for our loved ones. Any sort of justice, it doesn’t matter as long as I can feel like there was justice for my son and that he didn’t die in vain,” she says.

“It’s just painful knowing that your child died from something you ate.”

Moledi has not touched an Enterprise product since losing her son. DM