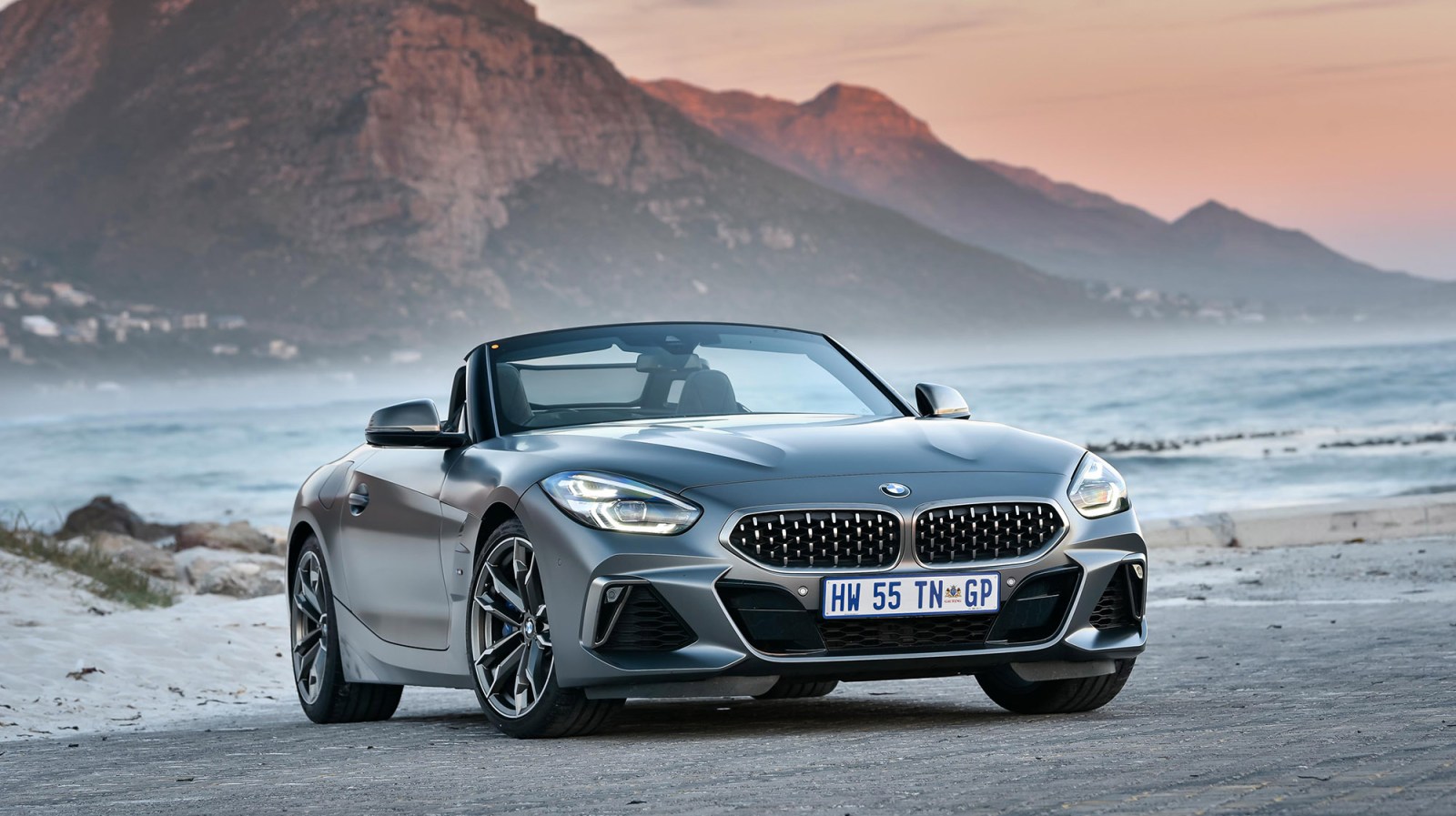 Sports cars might be an indulgence, but that hasn’t stopped the motor industry from making them. BMW this week launched not one, but two all-new sports cars: the wieldy Z4 roadster, and the brutish M850i Coupé. They’re worlds apart in concept, but both deliver driving thrills in spades.

It’s hard to warrant owning a sports car. Besides the fact that they’re typically two-seaters with little regard for practical considerations such as luggage space, they’re also built to be driven with gusto – an increasingly difficult endeavour on our crowded, potholed roads.

Add the fact that sports cars don’t come cheaply, are usually expensive to insure, and tend to end up being a third car, kept and driven on special occasions only, and it’s understandable that owning a sports car tends to be the preserve of the privileged (and well-heeled) few.

Even so, there’s a long list of sports cars to choose from – and BMW has just added two more to the mix. 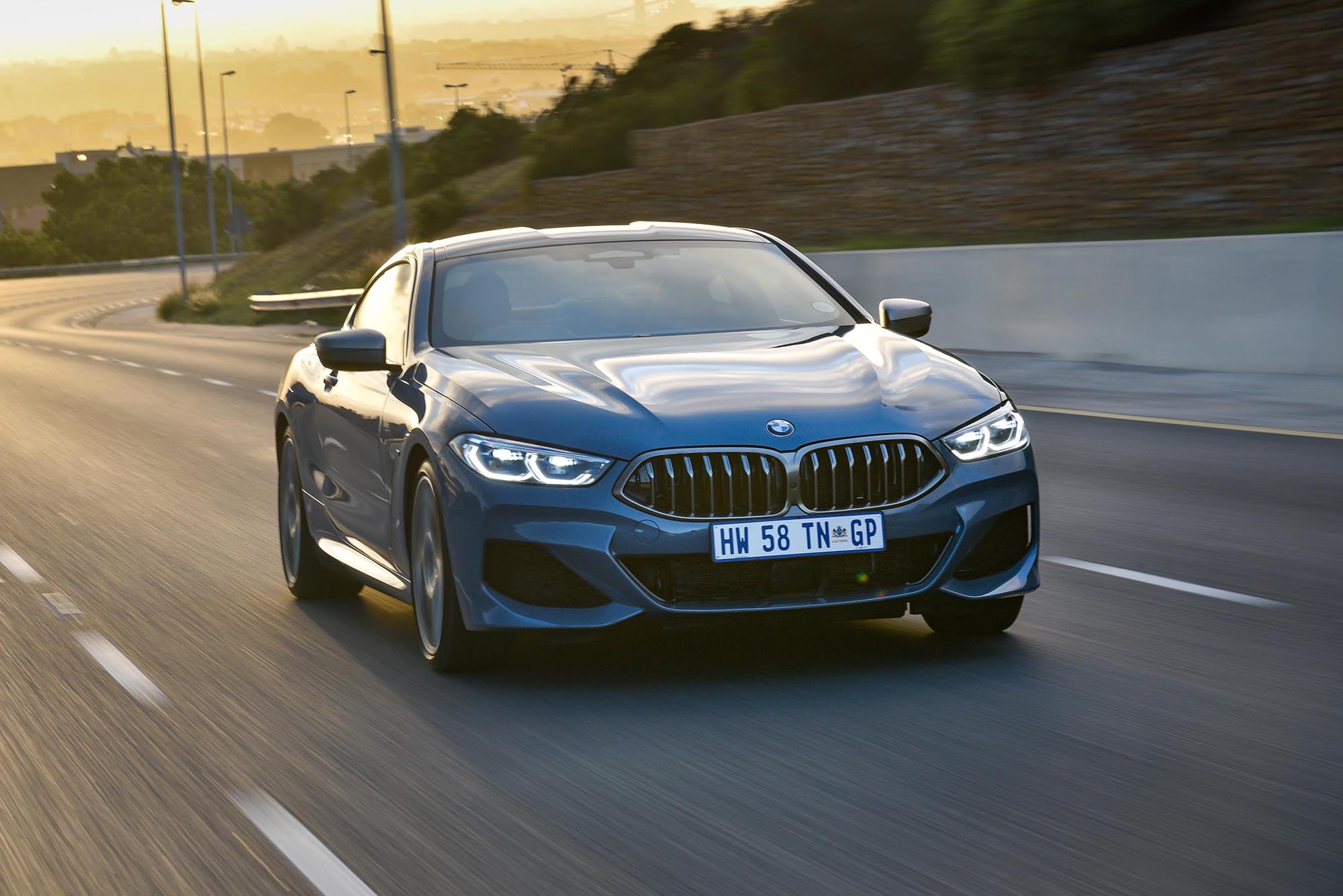 The first is the third incarnation of the Munich firm’s Z4 roadster, while the other is an all-new 8-Series: a sleek two-door designed to be a showcase for everything that’s aspirational and advanced in the BMW universe.

The Z4 fits the sports car bill more overtly than its more corpulent stablemate. It looks the fast and wieldy part, with more muscular haunches and wider tracks than its predecessor, endowing the two-seater with a poised and planted look.

That said, it’s also aesthetically more convincing than the rather heavyset car it replaces. Part of the reason is the lightweight canvas top, which ensures an authentic roadster character. 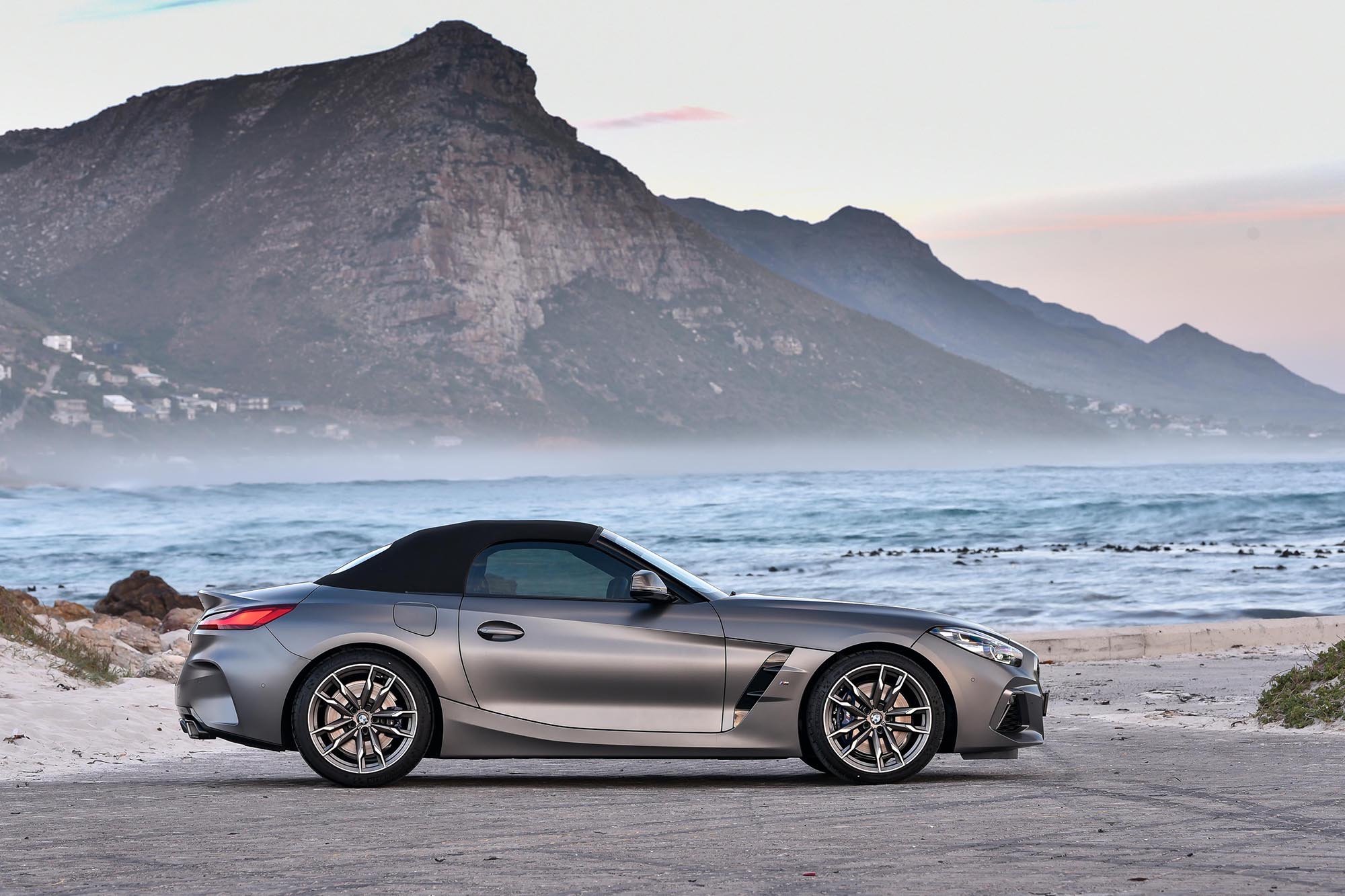 But there’s also a lot of visual aggression, thanks to the prominent kidney grilles, endowed here with an almost pixelated pattern, and parenthesised by the wide-eyed stare of the headlights.

A sharply etched shoulder line, scalloped flanks, hungry air intakes and a pronounced, scythe-like air vent behind each front wheel arch continue the fast and furious theme, while big alloys and fat rubber fill the wheel arches to the brim. 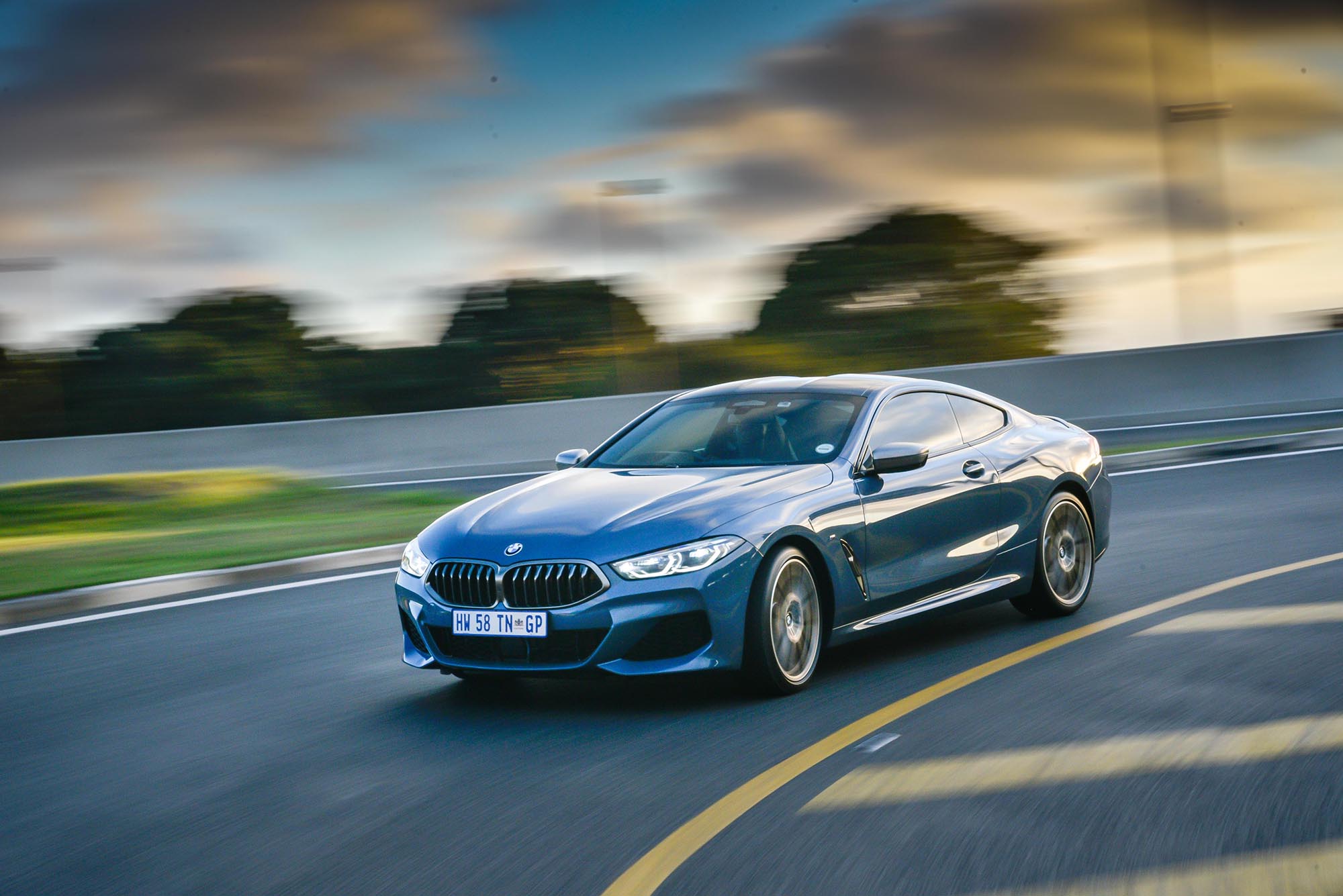 The profile is pure and purist sports car: a long, probing nose and short, pert rear embrace the soft-top’s low roofline, accentuating the slim glass area and a raked windscreen. The rear-on view is compact and precise, with dual large-bore exhausts jutting from the boldly presented diffuser, while the boot gets an integrated spoiler.

The interior oozes tailored quality and user-friendly tech. Bolstered bucket seats provide support and comfort, and there’s loads of leg and headroom, even with the soft top raised. 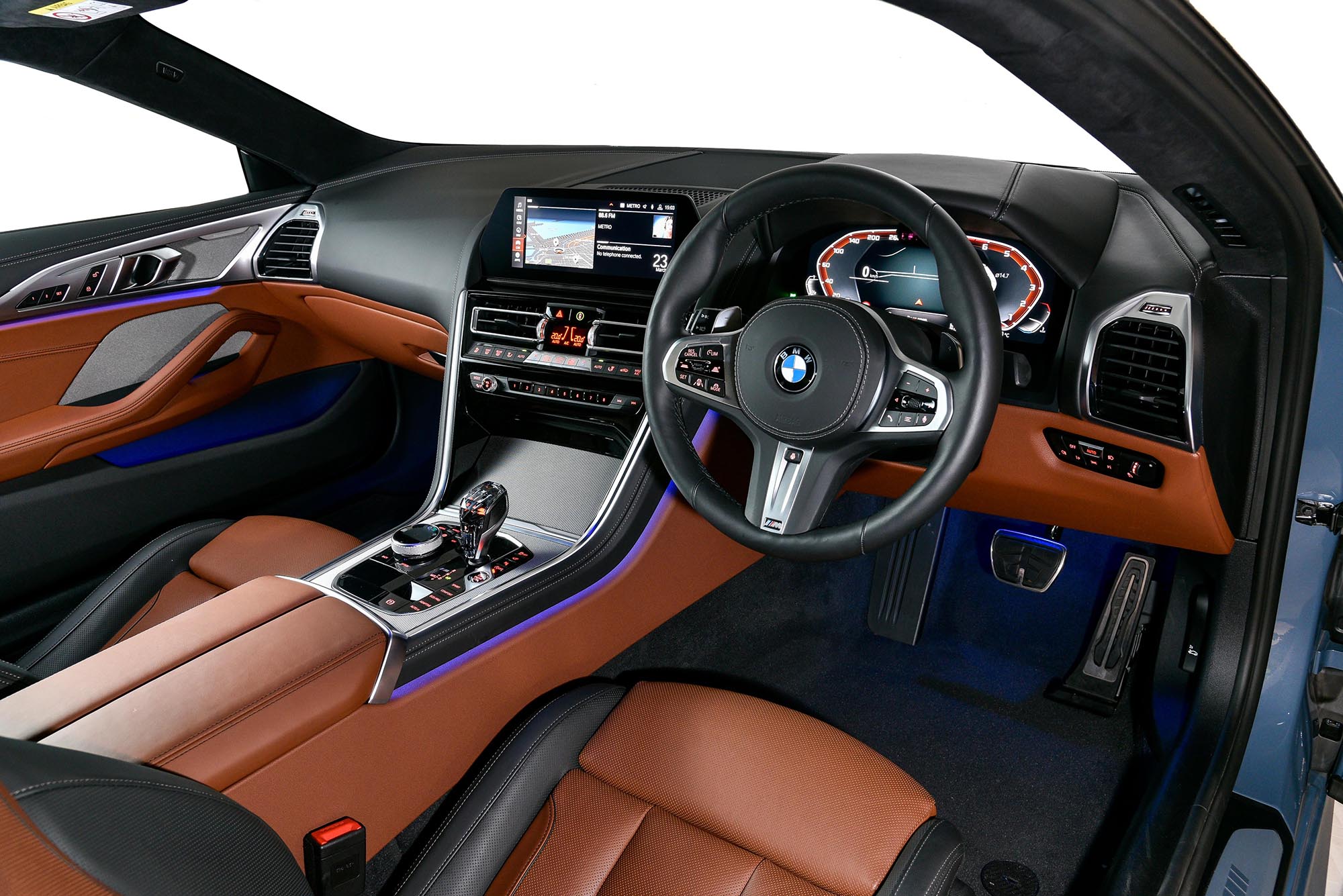 The deeply recessed instruments are virtual, digitally rendered items, and there’s a widescreen digital display in the centre stack for the infotainment system. Despite a plethora of switchgear, overall ergonomics are intuitive.

The new Z4 comes in two flavours: two-litre four-cylinder turbo, or 3,0-litre straight-six turbo, badged sDrive 20i and M40i respectively. No prizes for guessing which one is the most powerful: the M40i gets 250kW and 500Nm to play with, while tipping the scales at a modest 1,500kg. 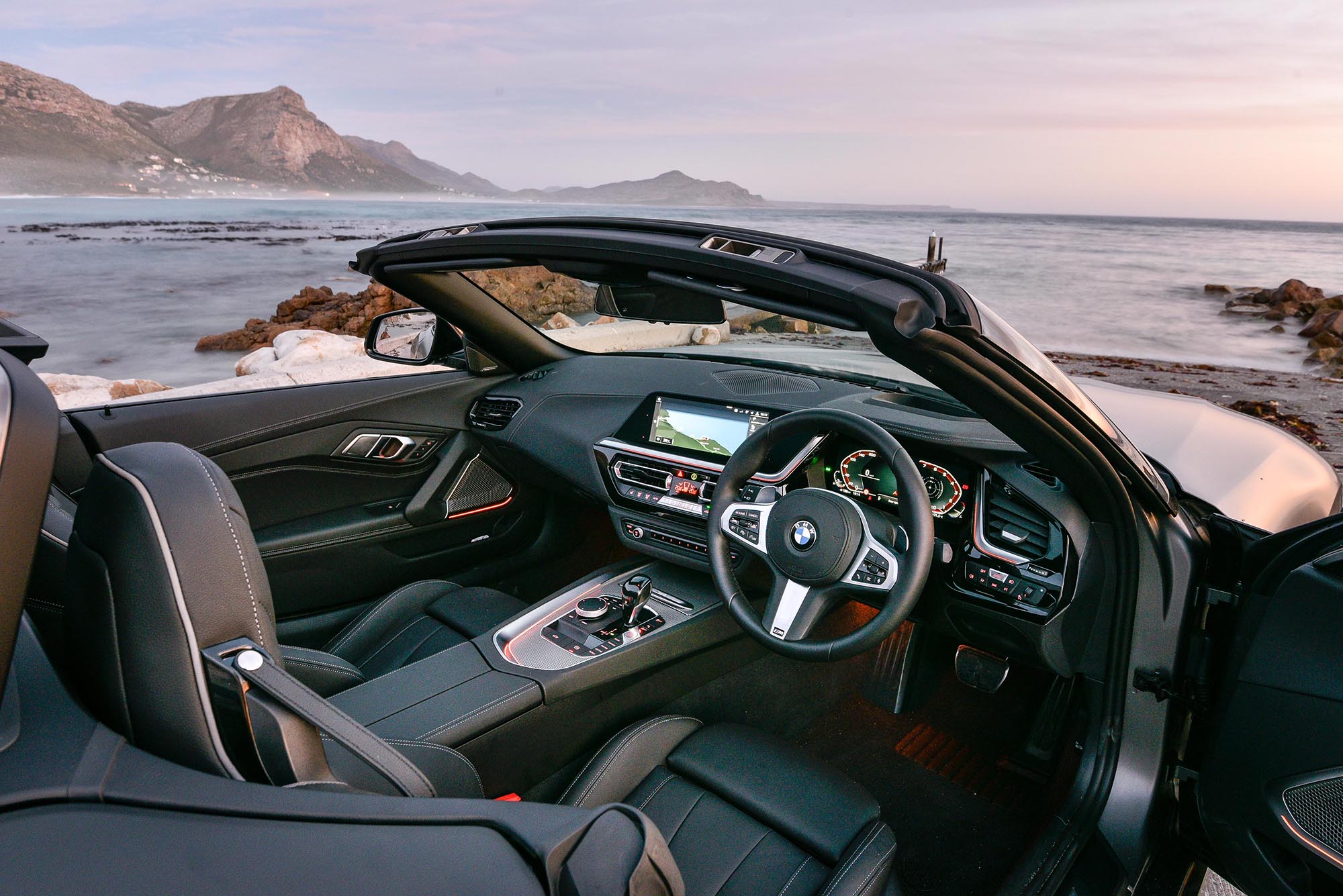 By comparison, the sDrive 20i’s 140kW and 320Nm seem almost too modest, even if the four-cylinder model weighs about 90kg less. And indeed, you have to work a little harder at maintaining the roadster’s momentum – but that’s actually a good thing.

Both models get an eight-speed auto gearbox, but swap cogs with the percussive precision of a sequential ‘box, especially in Sport and Sport Plus modes. And best of all, both Zs are resolutely rear-wheel drive, benefiting a steering action that’s almost delicately precise. 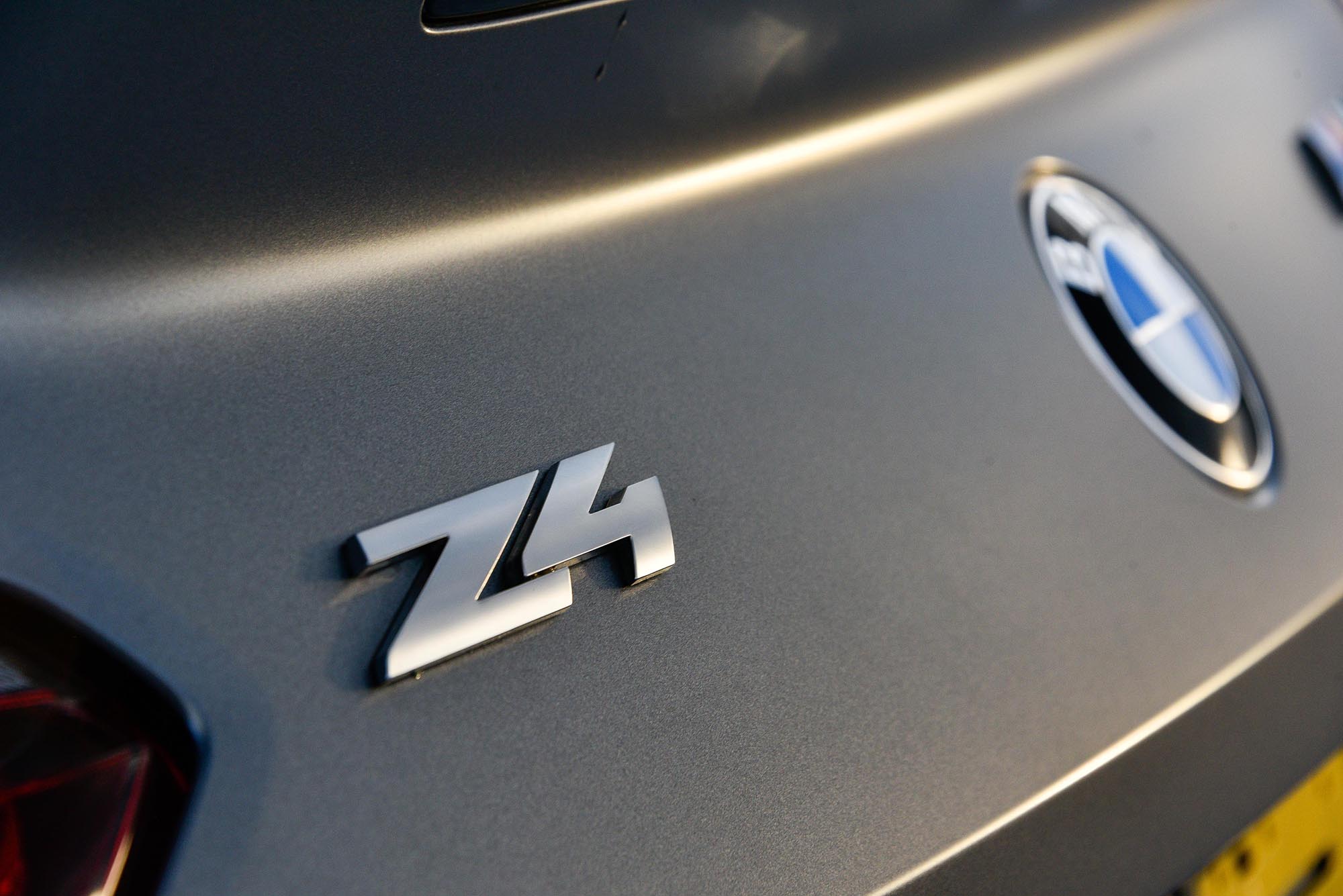 Hammering the ‘small’ Z4 through Franschhoek Pass is a lot of fun. The approach from the Villiersdorp side starts with delightfully flowing sweeps, interrupted by the occasional tighter bend, just to keep you on your toes.

There’s enough space here to run the little Beemer through at least six of its eight gears in quick, full-revved succession, and while the result isn’t landscape-blurring rapid, it’s fast enough to narrow the tar’s unwinding ribbon, while the steering becomes almost surgically precise. 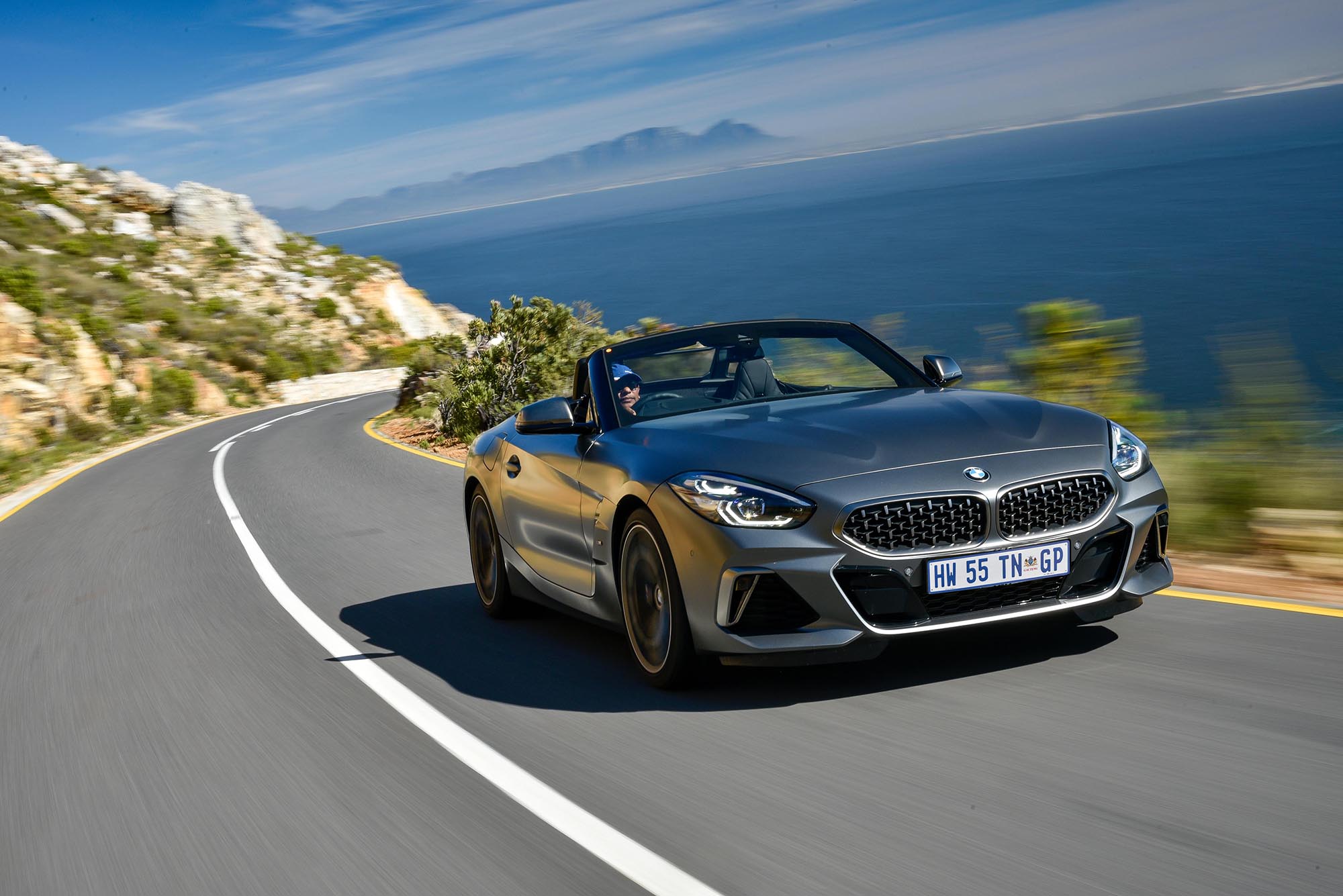 In the pass itself, third and fourth gears are in high rotation as you blitz the Beemer through the tight and twisty bits. You can drive the roadster hard, exploring its limits, without requiring the supersonic speeds – and superhuman driving talents – typical of more powerful machinery.

In short, you get to use most of the car’s dynamic potential most of the time. Yes, the M40i is punchier, and much more effortless, but the extra urge also means it demands more space, fewer corners, more sweeps – and perhaps the controlled confines of a race track – to show off its very real capabilities.

For everyday, real-world driving, I’d take the Z4 S20i any day – and it costs a lot less, too. 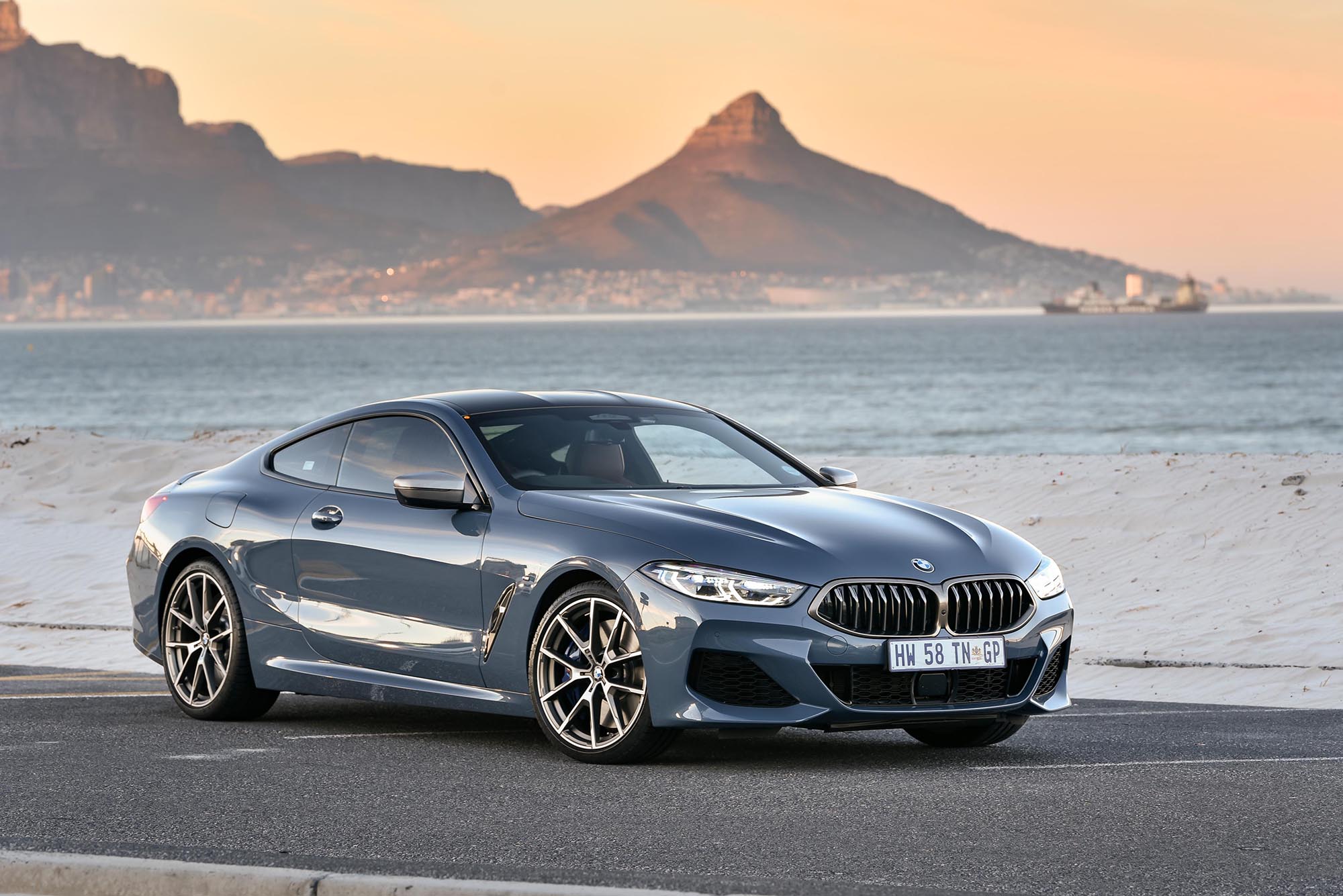 By comparison to the svelte and nimble Z4, the M850i is a beast: a feline, flowing, perfectly proportioned beast, it has to be said, but brutal nonetheless. It’s big, too: 4.85m long and 1.9m wide, with kerb mass of 1.89tons.

To BMW’s credit, the 850i Coupé carries its size and weight well: the lines are sleek, the shape wind-cheating. And there’s just enough visual muscle rippling under those smoothly sculpted contours to create a menacing presence. 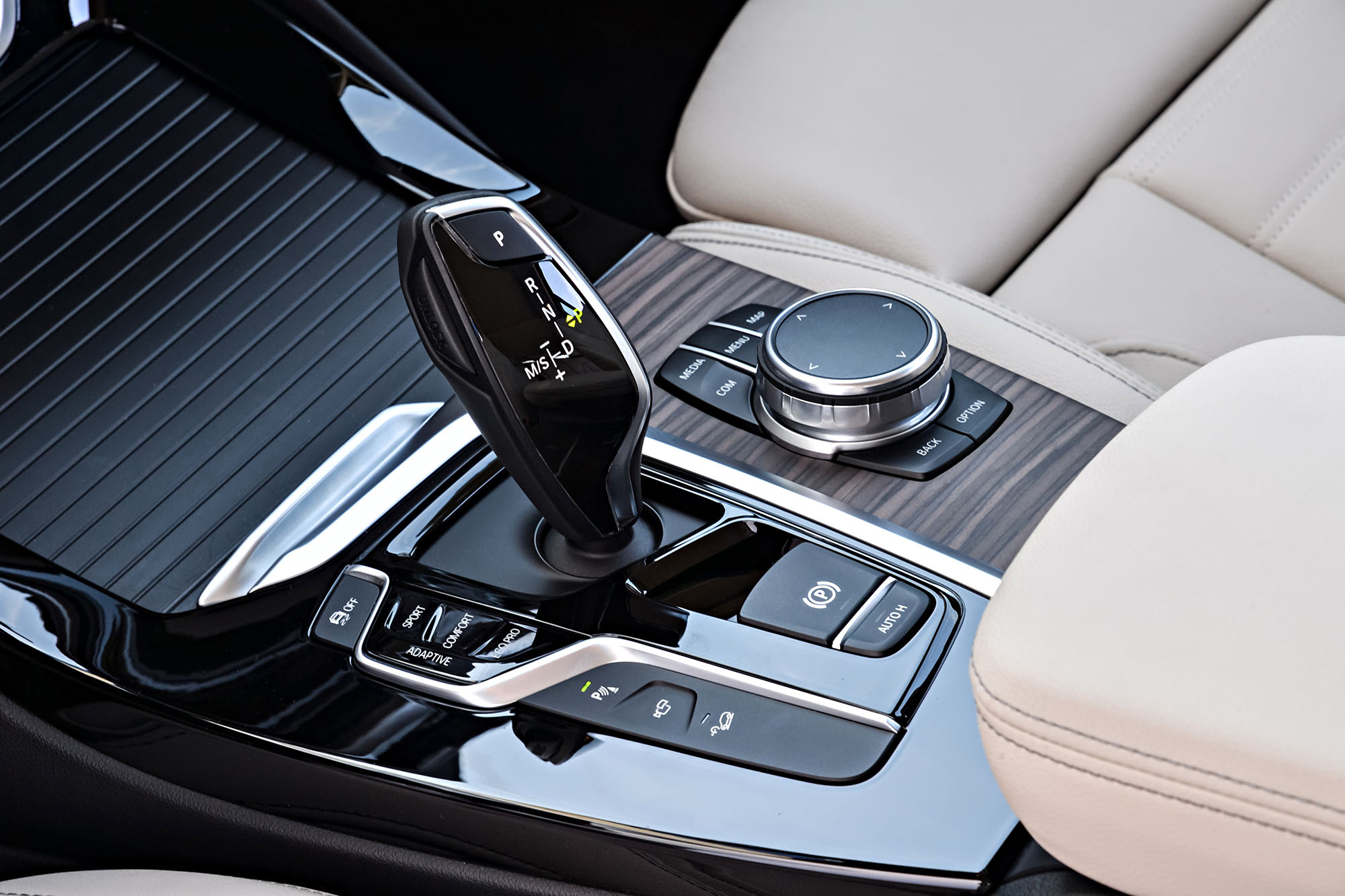 Visual highlights include the raw appeal of the carbon-reinforced glass fibre roof, employed both for its strength and low mass. And then there’s the two-door’s low-slung, tar-hugging stance, which adds to its aesthetic pugnacity.

To shrug off the effects of that corpulent weight, the M850i gets an all-new, high-revving twin-turbo V8, mounted low and far back under that expansive bonnet. It certainly has the right stuff: 390kW and a whopping 750Nm to be precise. 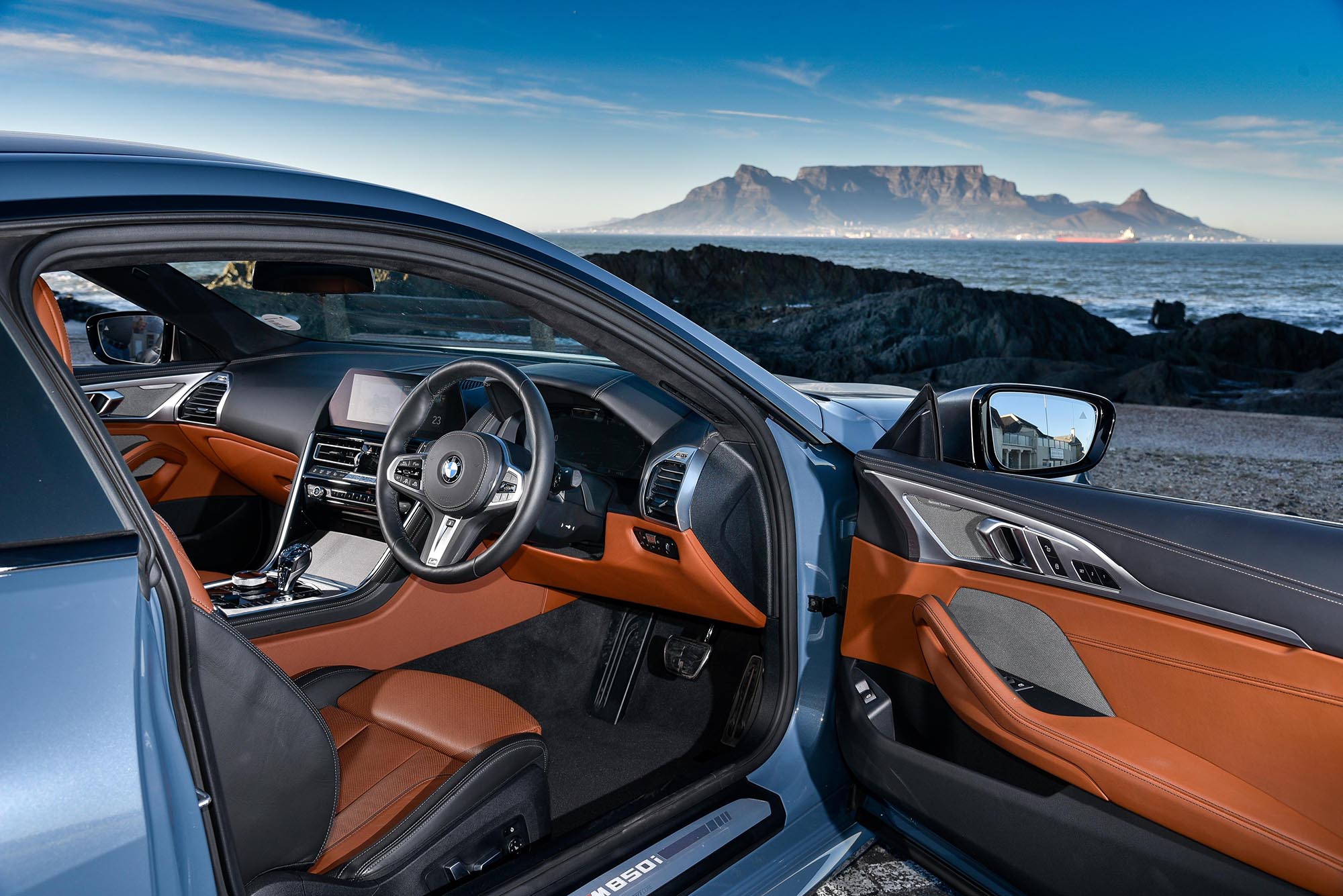 No wonder the big Beemer employs xDrive all-wheel drive to make full use of the engine’s output. It’s rear-biased, which allows classic sports car road manners and steering largely unsullied by the extra load of the drive system.

The interior is lavishly appointed – even the dash is leather-trimmed – and oozes upper-class sophistication. It’s spacious by sports car standards, too, with a sculpted rear bench seat offering occasional, albeit very cramped, seating if you’re an adult. 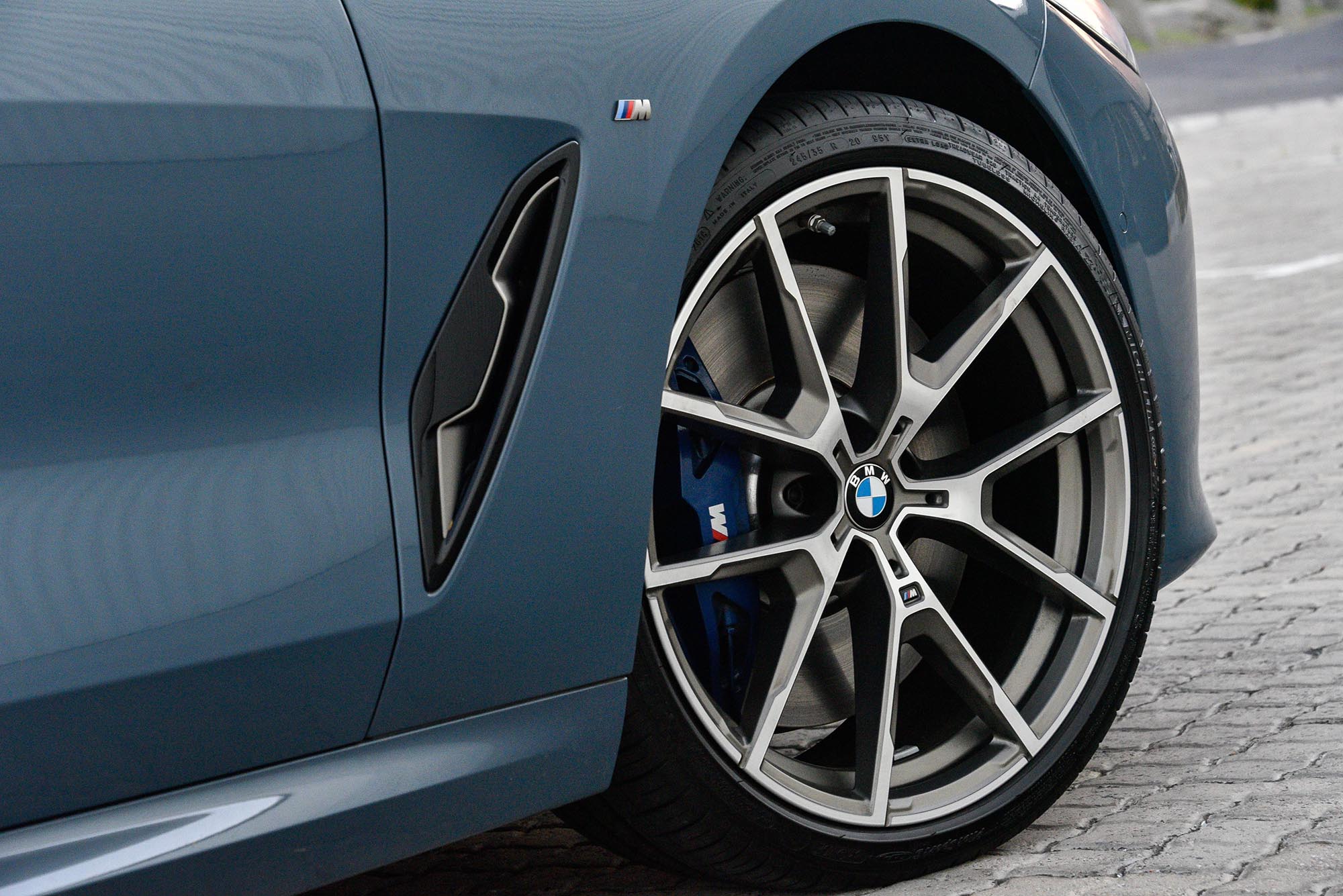 In other words, the big 8 is a classic 2+2 coupé, really designed to whisk two occupants plus luggage across vast distances with effortless, kilometre-gobbling ease. It fits the GT car bill, but it can also play the hardcore sports car part with mind-boggling conviction.

Bains Kloof is not usually the ideal playground for a big and heavy two-door machine. But the M850i tackles the treacherous turns and sudden hairpins, the blind corners and chassis-twisting camber changes, with regal aplomb. 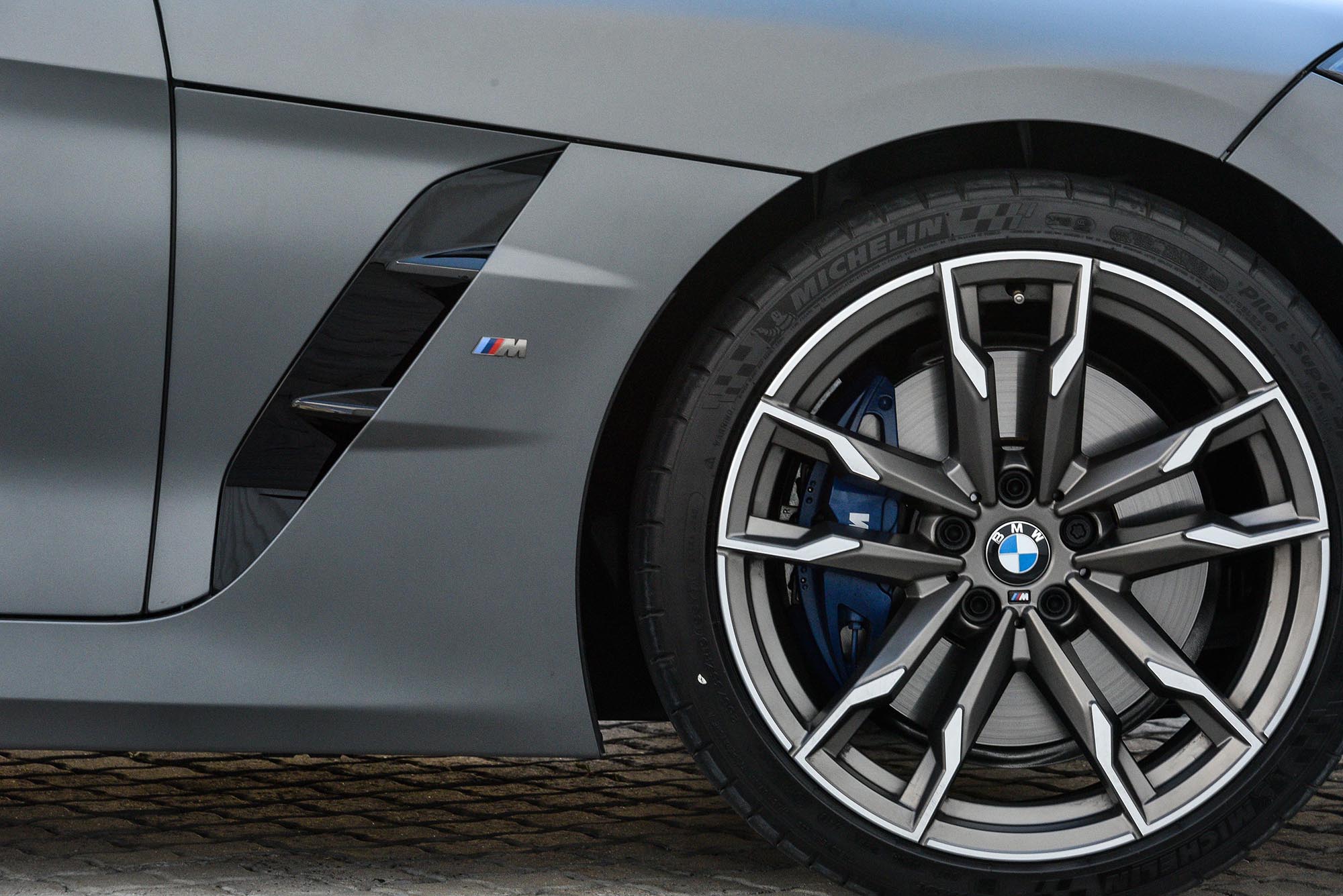 The steering is a revelation, allowing the coupé to be plunged deep into a corner before severely testing the bite of the big disc brakes, turning in with a vengeance, and powering out hard and fast.

There’s no lean, no yaw, no protest: the M850i feels poised and razor sharp, attacking each corner and radius with the voraciousness of something a lot smaller and nimbler. 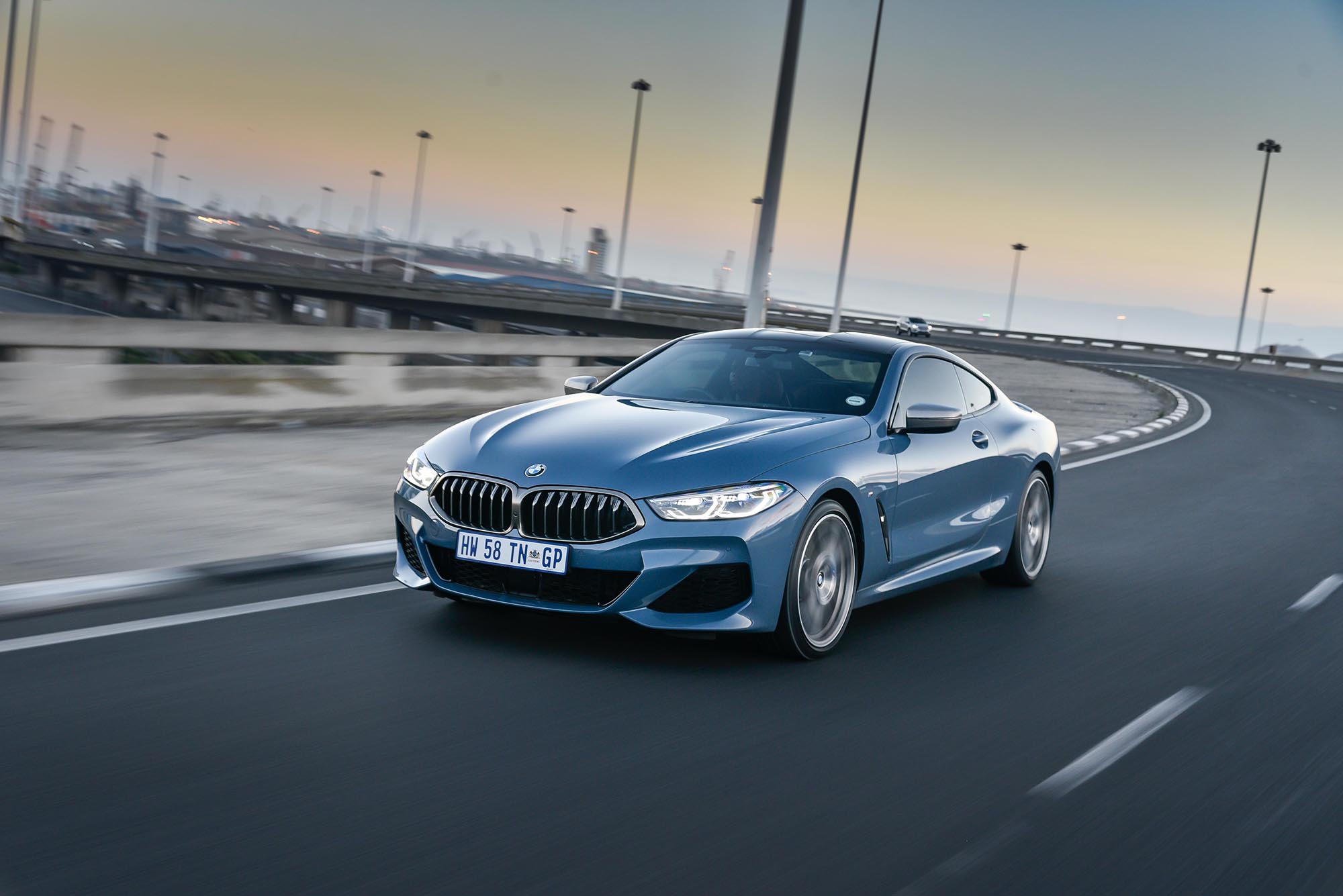 Yes, there’s the occasional squeal of tortured rubber as the rear briefly harks the call of gravity, but the experience is remarkably controllable – and entertaining.

Give it a long stretch of open road, and the M850i will gobble up the kilometres with an appetite that’s vaguely unsettling. It’s very, very fast – and most of the time it understates that velocity, so that you’re always going quicker than you think … 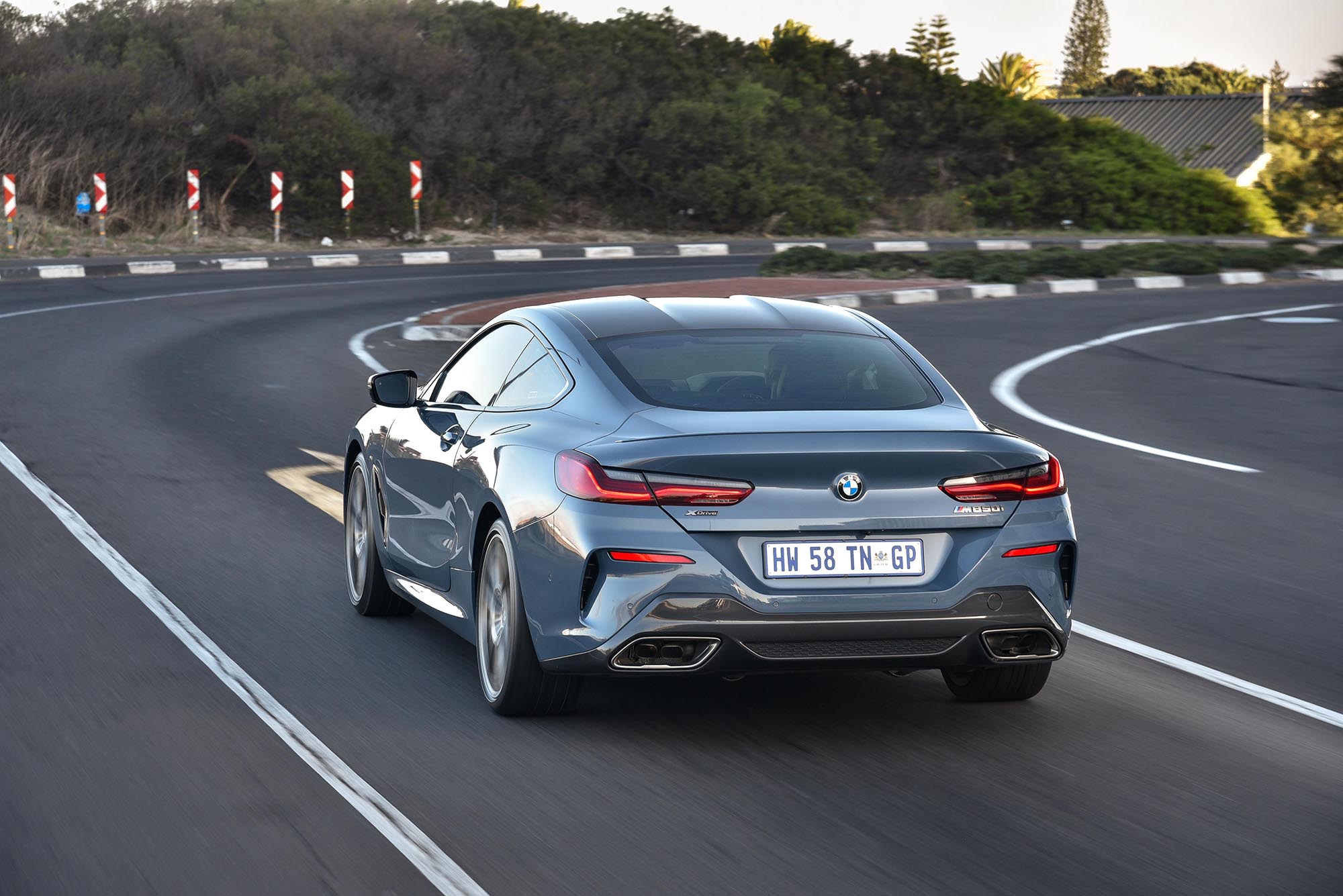 Adaptive damping ensures a good mix of tautness and compliance, although the Eight feels sports car firm, even in Comfort mode – as it should.

Long-distance cruiser or fast-forward sports car: the M850i fulfils both roles with composed, enjoyable confidence. It’s like having two cars for the price of one, which goes some way to vindicating the not inconsiderable seven-digit asking price!

The M850i is also offered as a convertible, while an M8 derivative is also coming, together with a four-door M850i Gran Coupé, and a matching M8 Gran Coupé. 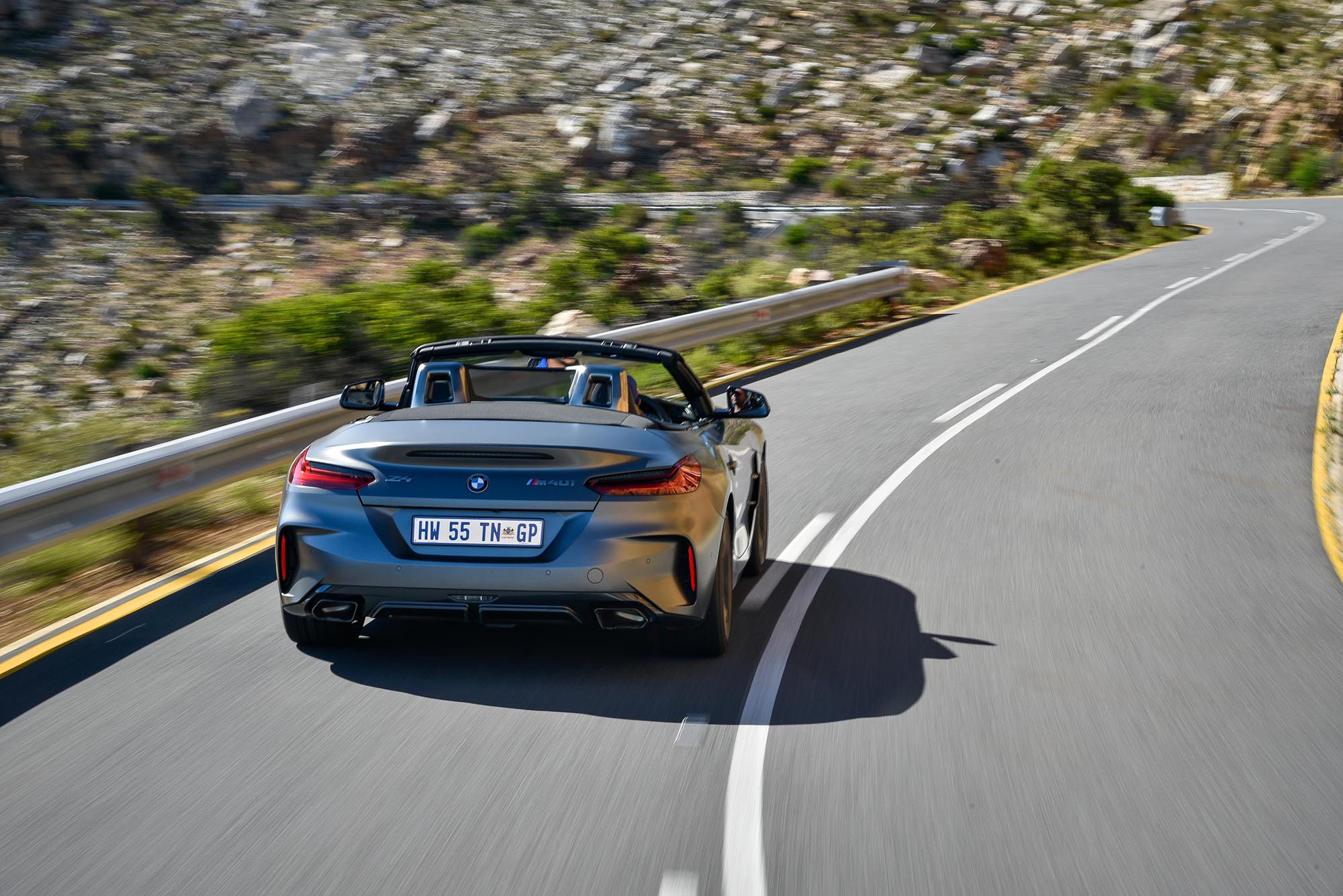 Frankly, the standard M850i is more than enough two-seater sports car than most people will ever need: expect the M8 models to be over the top …

As for the Z4 – well, the sDrive 20i marks a welcome return to the purist roadster formula for BMW. And while most will dismiss it in favour of the M40i, it might just be the pick of this new sports car bunch. DM