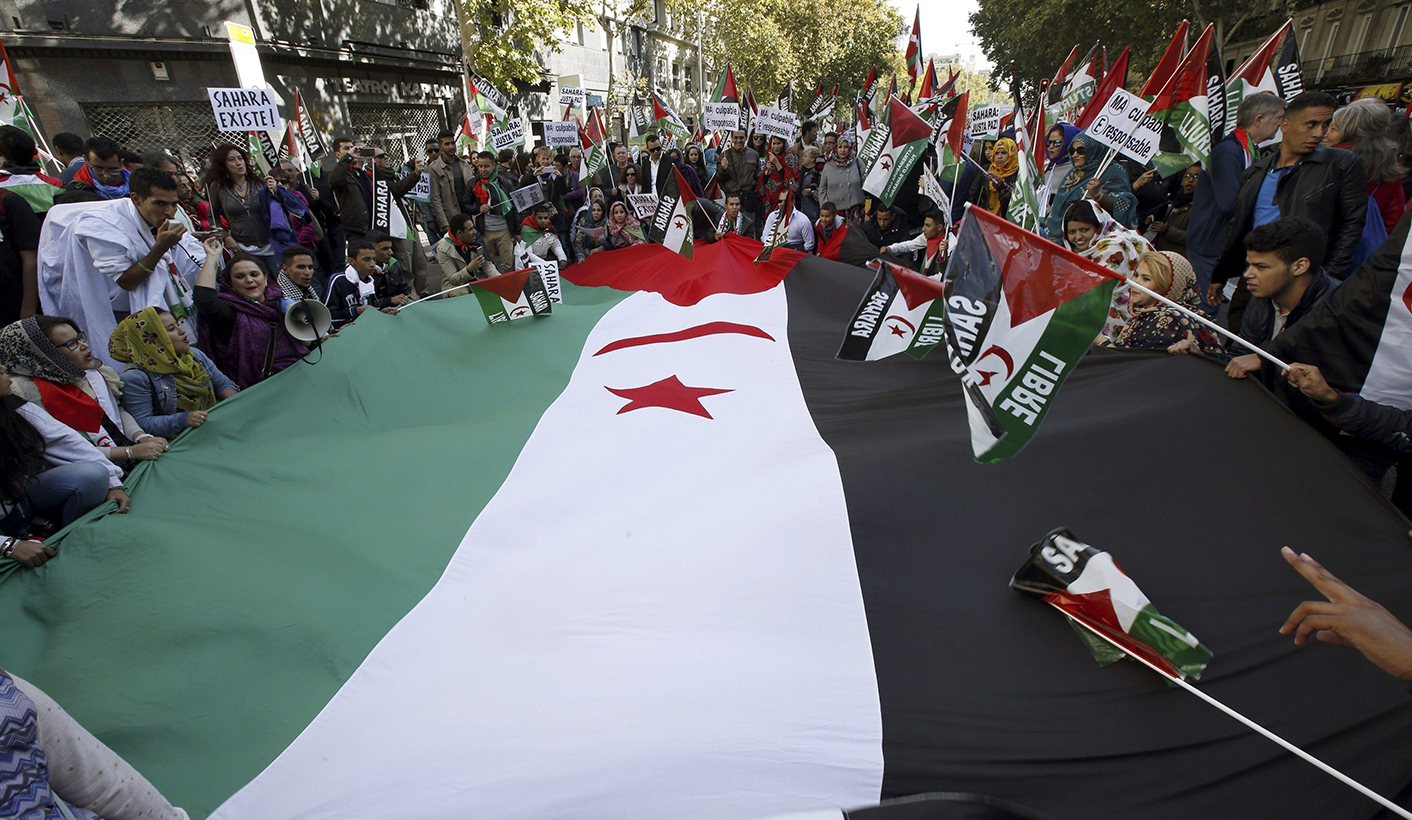 People hold a massive flag of the Sahrawi Arab Democratic Republic during a demonstration called by EUCOCO Support and Solidarity with the Sahrawi People, in downtown Madrid, Spain, 14 November 2015. EPA/ANGEL DIAZ

Rival conferences at either end of Africa ‘debate’ the thorny Western Sahara issue – one evidently trying to delegitimise the other.

South Africa and its continental rival Morocco engaged in duelling conferences on the thorny issue of the Western Sahara on Monday.

In an apparent bid to detract from this gathering, though, Morocco organised its own African ministerial conference in Marrakech at the same time. This rival conference clearly intended to delegitimise the Pretoria gathering by underscoring the point that the African Union had decided in 2018 that only the United Nations – and therefore clearly not SADC – should try to resolve the seemingly intractable Western Sahara problem.

Each side also clearly aimed to demonstrate that it had greater support.

Pretoria said “more than 20” countries were attending its conference. Sixteen of the countries it listed were African, plus Venezuela, Cuba, Nicaragua, and Timor-Leste.

Of the 16 other African countries attending, six were at the head of state or government level, the SA government said – SADR, Botswana, Lesotho, Zimbabwe, Namibia and Uganda. Six others were at ministerial level and the rest at a lower level.

Morocco meanwhile boasted that 36 African countries attended its conference, 17 at foreign minister level, five at other minister level and 14 at a lower level.

Several countries attended both conferences, maintaining their neutrality or hedging their bets.

The Sunday Independent reported this weekend it had been told by regional officials that Morocco had used “financial incentives” to get some ministers – including that of Malawi – to attend its conference. This could not be confirmed.

South African International Relations and Co-operation Minister Lindiwe Sisulu told the Pretoria conference she was “glad that this conference is happening in South Africa, the most recently decolonised on the continent.

“It serves to remind us of what we have always believed, that until the last colony, the Sahrawi Arab Democratic Republic, is decolonised, none of us are truly free.”

SADR foreign minister Mohammed Salem Salek told the Pretoria conference it was unacceptable that in the 21st century one African country was still colonising another. Colonialism clearly had no colour, he added. He claimed that Moroccan troops occupying part of Western Sahara were committing human rights violations such as torture and rape against the Saharawi people daily.

Morocco was also exploiting Western Sahara’s rich resources including the largest phosphate deposits in the world as well as gold, iron and uranium.

And Namibian deputy prime minister and foreign minister Netumbo Nandi-Ndaitwah, who is chairing the Pretoria conference, said, “Our task today is to call for the end of Morocco’s illegal occupation of Western Sahara through implementation of the UN Settlement Plan.”

She said SADC welcomed the engagements between the Moroccan government and SADR’s governing party, the Polisario Front, which were being facilitated by UN Special Envoy for Western Sahara, Horst Koehler.

Meanwhile, in Marrakech, Morocco’s foreign minister Nasser Bourita, while never explicitly mentioning the Pretoria conference, alluded to it throughout his speech to the counter-conference.

He insisted that through its decision 693 at its summit in Nouakchott, Mauritania, in July 2018, the African Union had decreed that the UN was the only international body which should be addressing the Western Sahara issue. This had been in part to preserve the cohesion of the AU in the face of an issue that had always divided it, he said.

Decision 693 called on the AU to support the UN and not to interfere with its efforts, Bourita said. Inasfar as Africa became involved in the issue, it should only be at heads of state level.

Involving the AU in mediating the Western Sahara would risk imploding the AU by creating divisions between the two-thirds of AU members, who Morocco says back its claim to Western Sahara, and the remainder of members who back Western Sahara’s claim to independence. Bourita called the latter position “anachronistic”.

AU experts note that under the principle of “subsidiarity” generally accepted by the AU, it is common practice for the sub-regional body closest to an issue to address it in the first place. One such expert remarked that Western Sahara “is a long way from SADC”.

Sisulu, however, emphasised that the aim of the solidarity conference was to “complement” the efforts of the UN and AU.

She acknowledged the important role played by the UN in trying to resolve the Western Sahara problem, dating back to its August 1988 Settlement Plan, accepted by Morocco, and jointly elaborated also by the former OAU. Furthermore, several UN Security Council resolutions, particularly resolutions 621 of 1988; and 658 of 1990, had approved the holding of a referendum for self-determination of the people of Western Sahara, Sisulu said.

“The year 2019 marks 28 years since the signing of the Western Sahara ceasefire agreement, yet the Saharawi people have, year-in-year-out since then, been denied the opportunity of holding a referendum to decide their future,” she added.

“Although the UN has taken an active role in this matter, we as SADC members have decided that our solidarity will complement these efforts; for as long as our sister peoples of Western Sahara continue to be denied their inalienable right to self-determination and independence consistent with the principles and purposes of the Charter of the United Nations, there is no post-colonial Africa.” DM