From churches to chesa nyamas: The ANC Gauteng’s election campaign goes where the voters are 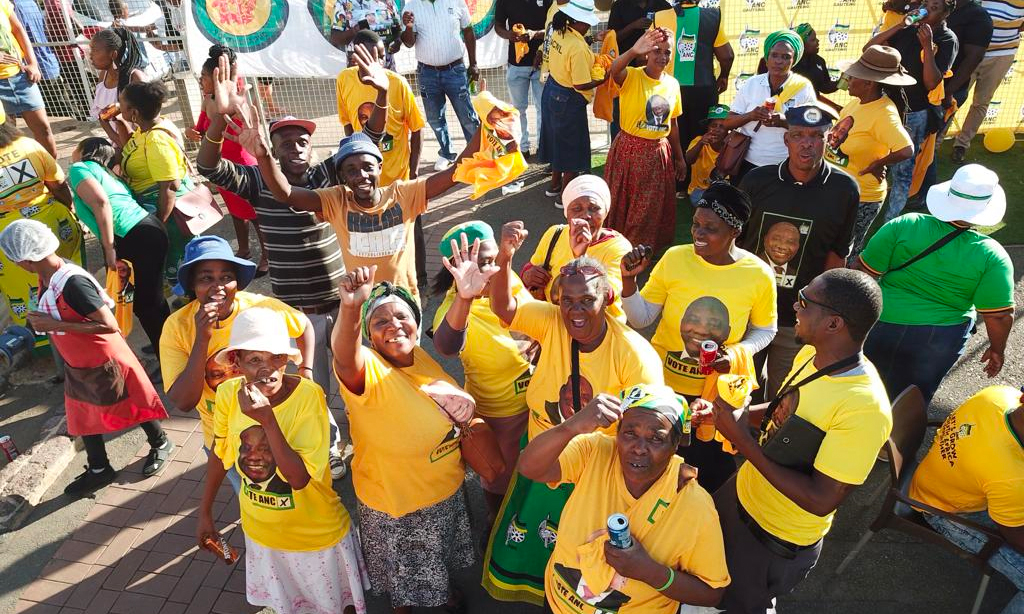 ANC leaders in Gauteng launched ANC Sundays – a more social side of the party’s elections campaign – with some braaied meat, pap and drinks in one of Johannesburg’s premier chesa nyamas. Campaign organisers hope the party’s presence on the ground will make perfect at the polls.

For once the politicians were quiet and the music took over. Busy Corner Imbizo Shisanyama in Midrand – where you can choose raw portions of meat to braai and eat with a mean chakalaka, pap and spinach – was more buzzing than usual on a Saturday, and by late afternoon almost all the patrons were in yellow ANC T-shirts.

In a corner in the outside area out the back, a group of eight women defied the trend. They were holding a baby shower for their friend with soft blue balloons and decorations. Almost all of them said they knew who they’d vote for, except for one undecided one, and none of them said the ANC’s party at the place would influence the way they voted.

Still, ANC elections campaign organisers hope the strategy of being seen to be having a good time will help them at the polls (and if it doesn’t, well then at least party campaigners would have had fun trying).

Maile explained that the elections campaign had “different tentacles” and the social campaign – ANC Sundays, launched yesterday – was one of those.

“We do understand that our society is not homogenous. We have got different sectors with different interests: young people, old people, women, people who go to church, and people who don’t. So if you campaign you can’t have a one-size-fits-all approach. You need to be versatile, agile, and have a presence where the people are. So coming here is part of extending tentacles to people,” he said.

He said the ANC had arranged with the owner, Rita Zwane, to come to her place on Sunday.

“We are happy to be here, to be given permission to be here by the owner,” Maile said.

It’s good business for her too.

In the morning, campaigners and volunteers would go to their churches, possibly in ANC kit, before going out to do some door-to-door campaigning or blitz campaigns in malls or public spaces. After that, they would end up at a designated establishment, as they did at Busy Corner on Sunday.

Back in the day, when Julius Malema was still with the ANC Youth League and the party was sure to govern until Jesus comes, it was the young ones who would have had car washes and socials like these. It would have been almost rude to ask this time what happened to the youth league because everyone knows it disintegrated after bowing to factional battles.

Maile, as a veteran of the league, clarified that the ANC Sundays are not mere drinking sprees (he implied that in the past the league events had been).

Before coming to relax at Busy Corner, volunteers had already gone to distribute election materials and T-shirts, interacted with members of the community, and gone to church.

He said party volunteers went to all these places to socialise.

“It is not a rally to invade, but to show our presence.”

He insisted, though, that the days of flash were over.

Unlike in the Malema era, when Champagne and expensive whiskey flowed, the people coming to Busy Corner paid for their own alcohol.

The party also wants to tune down on flashy cars, and that was why volunteers would only move around in ANC-branded vehicles when on the campaign trail.

“We have some people in the ANC who drive flashy cars,” Maile admitted. “We don’t want those flashy cars showcased here.”

For all his talk, at least one comrade rolled into Busy Corner’s chaotic parking area in a Maserati and with what looked like a whiskey in his hand.

Malema’s Economic Freedom Fighters might have established some presence in nearby Thembisa, but Maile said the ANC was not worried about other political parties. Out of the three big ones, he reckoned it was the Democratic Alliance that should be worried about possibly shrinking its vote, according to a recent Ipsos poll.

The EFF would get stuck at a certain threshold, he said, and for the rest they were bluffing, he believed.

“Obviously they make a lot of noise, they are good at that. It creates the impression that they are popular in communities. No party has a presence like the ANC everywhere.”

EFF campaigners have been spotted relaxing at Busy Corner in previous election campaigns after a day of campaigning, but this wasn’t nearly on the scale of what the ANC did on its first ANC Sunday.

Maile, however, admitted that the ANC had a lot of work to do to convince voters to go out and vote for the governing party.

“We are not happy from where we sit, because we believe we could do better.”

A party whose support dropped to 54% in the last municipal elections in 2016, and which could, according to polls, drop even further, should be pretty alarmed.

He said that in 2019 there is a lot of attention on smaller, one-on-one campaigns rather than showy gatherings, claiming that the party has at least 10 volunteers for each of the more than 2,700 voting districts in the province. They have goals of going to homes, and later going back to those same homes numerous times, to convince people to vote for the party.

Outside Busy Corner, next to the road in front, some people were now drinking beer from the back of their cars. A thin man in an ANC T-shirt asked for R5. Less than five minutes’ drive from the venue, the road is lined with houses made of corrugated iron, and some shacks. At one spot, which looked like an informal dump site, people rummaged through rubbish for anything they could still use. DM