The crib-sheet to the political parties contesting the 2019 polls, Part One 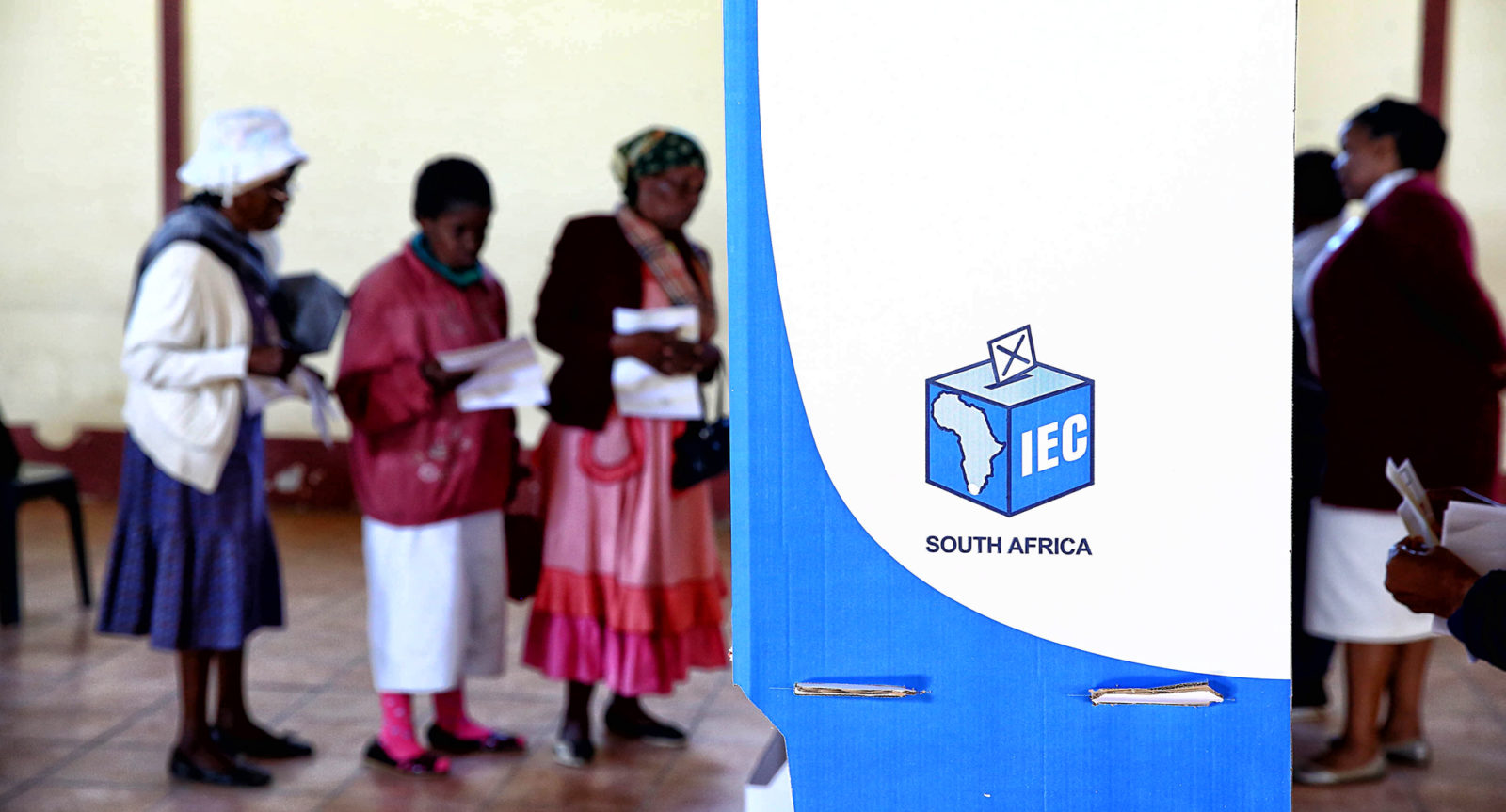 The Political Party Funding Act will force parties to fess up who has been dishing out the boodle, something that has intrigued South Africans for ages. (Photo by Gallo Images / The Times / Thuli Dlamini)

The IEC announced that a record 48 political parties have successfully registered to contest the 2019 general elections. Most have been formed recently, suggesting that many see an opportunity to capitalise on voter uncertainty after the Zuma years. Noteworthy, too, is the number of religious parties — with churches hoping to turn congregant numbers into political power. In the first of a two-part series, we take a brief look at the parties appearing on the ballot sheet in May.

Launched in 1993, one of the ACDP’s unique claims to fame is that it was the only party to reject the South African Constitution — on the basis that it enshrined the right to abortion. Supports a return to “biblical principles”, including the imposition of the death penalty. Led by Dr Kenneth Meshoe, the ACDP received just over 104,000 votes nationally in the 2014 elections, giving it three seats in the National Assembly.

No information is available. Confusingly, there is a Namibian opposition party of the same name; and the South African Congress of Democrats was an anti-apartheid organisation run by radical white lefties.

The ACM was launched in December 2018 by former SABC chief operations officer Hlaudi Motsoeneng. As per the party’s name, which refers to Motsoeneng’s policy of promoting local content at the SABC, the party will have a special focus on protecting creative artists. The ACM already has two seats in Gauteng municipalities because councillors from the Randfontein People’s Party joined ACM.

Launched in March 2018 by Dr Convy Baloyi, a “born-again child of God”. The party abbreviates to ACO, pronounced “Ah-Kho”, and is campaigning on conservative religious principles. It wants to preserve marriage as an institution uniting “one man and one woman”, and end abortion. The ACO also proposes the return of the death penalty for crimes including murder (which, in ACO’s view, includes the medical practice of carrying out abortions).

ADeC (yes, that is their typographical preference) was originally launched in December 2017 by Makhosi Khoza after she left the ANC, but Khoza resigned from the party four months later. It is now helmed by apartheid-era unionist and former ANC MP Dr Moses Mayekiso. A non-racial party built on “the philosophy of Ubuntu”, ADeC believes land expropriation should be funded with reparations from the nations which colonised South Africa.

Launched in 2005, the AIC had an unexpectedly strong showing in the 2014 national elections of around 97,000 votes — which some cynics attributed to a party name and logo very similar to the ANC’s. Its founding issue was unhappiness over the incorporation of Matatiele into the Eastern Cape from KwaZulu Natal: an issue it has yet to resolve. The party was reported to be almost broke and leaderless in January 2019, but clearly scraped together the cash to register for the 2019 elections.

Formed in 2007 when leader Themba Godi left the PAC, the APC won one seat in the National Assembly in 2014, taken up by Godi. As chairperson of Parliament’s Standing Committee on Public Accounts (Scopa), Godi has enjoyed an outsized profile over the past 12 years. He is the only non-ANC MP chairing a parliamentary committee and in the past has faced accusations of going easy on the ANC due to his old PAC links.

Founded in 2018 by Bryce Mthimkhulu, the King of the amaHlubi nation in KwaZulu-Natal, the ARU’s leaders are all traditional chiefs. The stated motivation for the party’s launching was the dissatisfaction among traditional leaders about the potential loss or weakening of their powers. Mthimkulu was previously taken to court by the government — unsuccessfully — to try to force him to stop calling himself the King of amaHlubi.

A party founded in 2017 by security guards lobbying for greater rights for members of the private security industry, but unaffiliated with the industry body PSIRA. ASC president Teboho Motloung has previously called for security guards to be directly employed by the state and granted status on a par with the South African Police Service (SAPS), as the party says that they do similar work to police and are exploited by the private sector.

Best known for its most high-profile member, businessman Mzwanele Manyi, the ATM (don’t laugh) was founded in 2018 by the South African Council of Messianic Churches in Christ and is led by Vuyolwethu Zungula. It supports traditional leadership structures, the reintroduction of capital punishment and land expropriation without compensation. Church figures linked to the ATM have been alleged to be close allies of former president Jacob Zuma. Other than Manyi, the party has succeeded in drawing defections from DA and EFF provincial leadership structures, so don’t write them off too quickly.

The AASD is led by the former ANC mayor of Mangaung, Pappie Mokoena, who was acquitted of theft and money-laundering charges in 2011. Although little information is available about the AASD, more is known about Mokoena, who with his brother reportedly heads Bloemfontein Correctional Contracts, the private entity which runs Mangaung prison — a facility described recently as “marred by irregularities and allegations of abuse and torture”.

Agang was formed in 2013 by Dr Mamphela Ramphele, who left the party in 2014 just after Agang had won two seats in the National Assembly in that year’s elections. Since then, the sole visible Agang representative has been Andries Tlouamma, well known for his bizarre/colourful remarks in Parliament — including a recent suggestion that load shedding should take place “only at Jacob Zuma’s house”.

Founded in 2007, Al Jama-ah is an Islamic party which has yet to win seats in the National Assembly, but has nine councillors at the municipal level. Led by Ganief Hendricks, the party has lobbied mainly on issues relating to Islamic practice, including the Muslim Marriages Act and the labelling of halaal foodstuffs.

Alliance For Transformation For All

The ATA was launched in 2018 by taxi associations to provide a voice for those in the taxi industry, but says it will also uphold the rights of small businesses in general. Given the extremely negative perceptions of the taxi industry nationally, it may struggle to win votes outside its industry — but the ATA says it aims to represent taxi associations, hawkers, churches and young people.

Azapo is one of the oldest organisations contesting the 2019 elections, having been formed in 1978. The black consciousness party, led by president Strike Thokoane, is running on a platform of strict immigration controls, but also aims to “make Azania gun-free”. Azapo’s high watermark in democratic South Africa was the appointment of its former president Mosibudi Mangena as Minister of Science and Technology in 2004, but in the 2014 elections the party came about 10,000 votes shy of a single seat in the National Assembly.

The BRA was formerly known as the Bushbuckridge Residents Association, founded in 2011 by disgruntled ANC members to tackle the problem of poor service delivery in the Bushbuckridge municipality in Mpumalanga. President Delta Mokoena and 10 other members were charged with kidnapping and assault in 2018 after allegedly participating in vigilante violence.

Arguably the most controversial party contesting the 2019 elections, Andile Mngxitama’s BLF faces a legal challenge over its election registration due to its explicit prohibition of white members. BLF supports radical economic transformation and a society in which “black people must come first in all areas of life”. In the past, BLF has vocally supported the Gupta family and is presently calling for the return of former Eskom CEO Brian Molefe to solve South Africa’s electricity crisis.

The newly-established ZACP distinguishes itself with a logo consisting of a purple cow. Formed by a hierarchy-free leadership collective including former YFM CEO Kanthan Pillay, its policies can be summarised as “smaller government, more guns”. Its solution to the problem of gender violence in South Africa is for women to buy guns.

An Eastern-Cape based religious party, the CPM is led by New Life Family Bible Church leader Brian Mahlati. It aims to “protect the interests of the Church”, and its logo references Psalm 33:12: “Blessed is the nation whose God is the Lord; and the people whom he hath chosen for his own inheritance”.

Founded in 2018 by president Cheslin Felix, the party claims 34,000 members across the Northern Cape, Eastern Cape and Western Cape and is focusing its campaigning on disaffected “brown” South Africans. Felix has hit out at both the ANC and the DA for prioritising the rights of black and white South Africans, respectively, over those of “bruin mense”. It may be the only party contesting the 2019 elections with a husband-and-wife leadership team: Felix’s wife Lucia is the party’s vice president.

Congress Of The People

Formed in 2008 after party president Mosiuoa Lekota left the ANC in protest over the ousting of former president Thabo Mbeki, Cope’s support has dwindled at the ballot box from more than 1.3 million votes in 2009 to just over 123,000 votes in 2014. The party’s three MPs have maintained a vocal presence on the national stage in their commitment to non-racial constitutionalism, though Lekota has recently raised eyebrows through unexpected expressions of support for racist singer Steve Hofmeyr and alt-right group AfriForum.

South Africa’s largest opposition party, the DA is led by Mmusi Maimane and grew out of what was the Democratic Party, founded in 1989. The DA won just over four million votes nationally in 2014, or 89 seats. DM

Part 2 of Daily Maverick’s party crib-sheet will be published on Tuesday, 26 March.