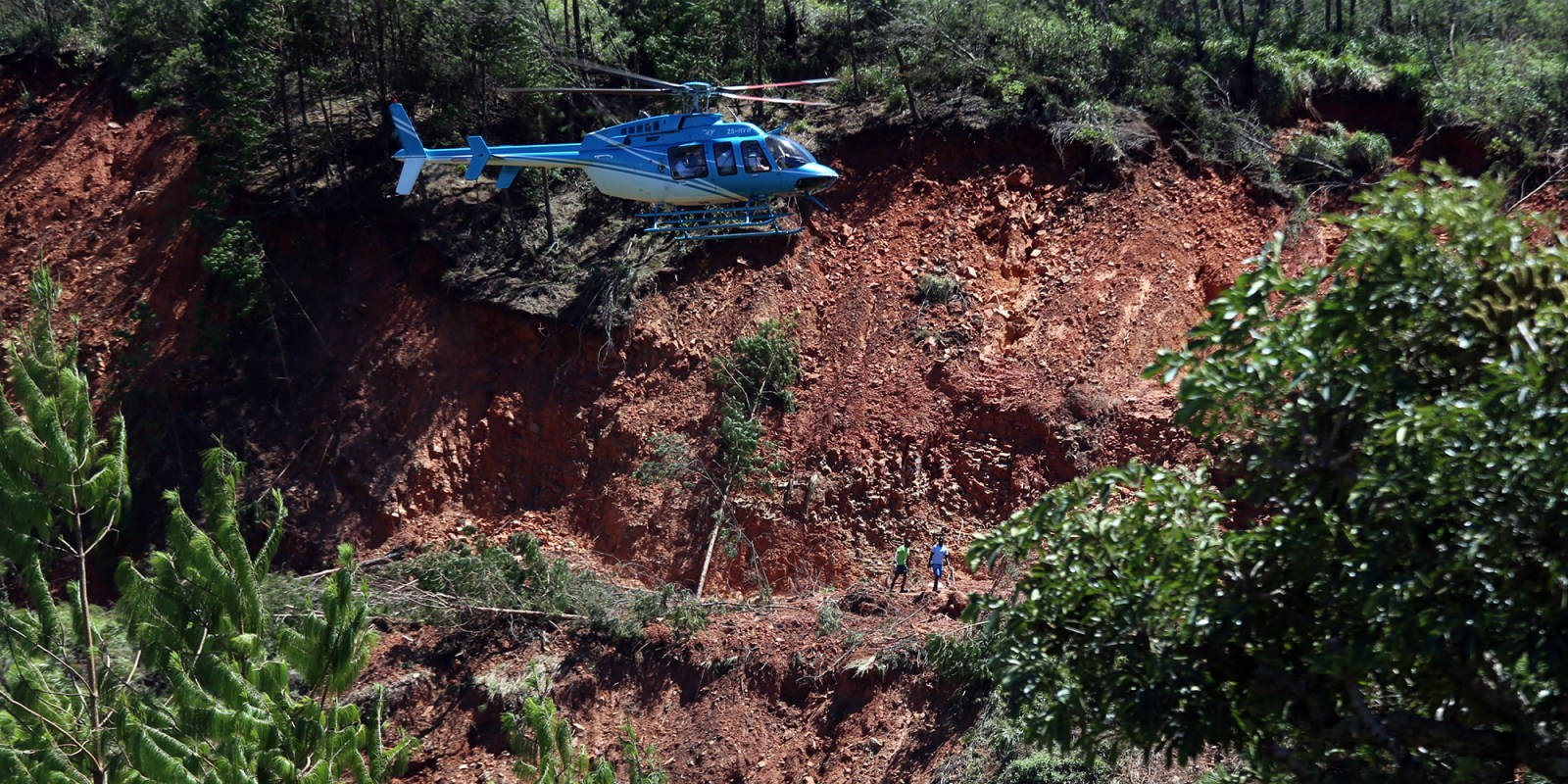 A rescue helicopter flies over a section of mountain showing the effects after Cyclone Idai in Chimanimani, Zimbabwe, 21 March 2019. More than 100 people are believed to have died with hundreds injured, several missing and thousands displaced after Cyclone Idai struck Zimbabwe. President Emmerson Mnangagwa has declared Cyclone Idai a national disaster. Neighbouring countries such Zambia, Namibia, and South Africa have offered material help to the affected people and areas. EPA-EFE/AARON UFUMELI

In the Tanganda River, Chipinge and Chimanimani districts of Zimbabwe, floods wiped away bridges, homes and human lives.

For Taipei Mushima, last Saturday night will forever remain a nightmare as heavy flooding and winds left her community grounded.

“I didn’t sleep that night – everything we had, our homes, furniture was completely swept away. We are in deep trouble as we now don’t have shelter and food, no source of income, as the bridge where we used to derive our livelihood was wiped away before us.”

They provided hairdressing services at the bridge as well as selling wares to travellers crossing the bridge.

Cyclone Idai, the worst such a disaster to hit hard in Mozambique, Zimbabwe and Malawi, has in the past week cleared everything in its path, causing massive floods and mudslides and leaving thousands dead, injured and homeless, with crops and livestock destroyed.

Officials in Zimbabwe have said 350 people may have died in their country and over 200 injuries have been reported; 217 people are reportedly missing. At least 923 homes have been destroyed in Manicaland and Masvingo provinces (the areas hit by the Cyclone in the country).

Crops and livestock have been destroyed in all affected areas and more than 2,500 households (12,500 to 15,000 people) are estimated to be affected. Currently, the official death tolls in Mozambique and Malawi are 200 and 56 respectively, though the figures continue to rise. However, in Mozambique, President Filipe Nyusi said more than 1,000 people could have lost their lives.

In Zimbabwe, the Chimanimani and Chipinge districts in the eastern mountainous part of the country remain the hardest-hit. Head of Operations at the Zimbabwe Red Cross Society said an accurate assessment of the exact number affected and displaced is still difficult to establish as some areas remain inaccessible. Power supply and communication continue to be disrupted in affected areas as well.

Daily Maverick spoke to the director for the United Mutare Residents and Ratepayers’ Association, Bishop Sebastian Bakare, who said Cyclone Idai was forecast two/three weeks ago but lack of planning on the part of the government to respond to the cyclone has resulted in the loss of lives and left many homeless.

“The government is reacting too late, and only giving help four days after the cyclone had destroyed infrastructure and people’s lives. Now lives have been lost and people have been sleeping in trees, mountains and squeezing in classrooms because they had nowhere else to go,” Bishop Bakare added.

Speaking to the press on Tuesday, minister of local government, July Moyo, said they had communicated with the people but couldn’t force them to vacate their homes.

“We knew the areas that was to be affected by the cyclone, only that we didn’t realise the intensity of the cyclone,” said Moyo.

The government is being castigated for not registering community radio stations that could have aided in disseminating information on the cyclone.

Bishop Bakare said the government didn’t do enough to ensure the disaster was averted and casualties were reduced.

“The damage is beyond measure at the moment as bridges, homes have been destroyed, and in fact the government should have made some provisions, sending a team in case the cyclone comes, as it did,” Bishop Bakare added.

As of Thursday, Masvingo province was still experiencing heavy rains and winds and five more people have been confirmed dead. In Chimanimani district, at Copper Growth Point, more than 200 people are reportedly missing in the area alone.

The ZRCS have noted that the damage to the port in Beira and its access roads in Mozambique is likely to cause serious disruptions to fuel and food supplies to Zimbabwe, as well as the livelihoods of people in the eastern regions of the country that rely heavily on the Zimbabwe/Mozambique trading corridor.

This comes at a time when Zimbabwe was already failing to provide adequate supplies of fuel to meet the local demand despite having increased the pump price in January, further compounding an already dire situation.

“There is also an increased risk of malaria, cholera and other diarrheal diseases, and a concern regarding the potential for a communicable disease outbreak,” the report by the ZRCS reads.

This is not the first time the region has been hit by a cyclone. In 2000, during Cyclone Eline-induced floods, 136 deaths were reported in Zimbabwe. In addition to this, 59,184 houses and huts were destroyed, 14,999 toilets caved in, 538 schools and 54 clinics were damaged, 230 dams burst while a total of 20,000 head of livestock were lost. DM