Buthelezi lauded at 90 as party launches manifesto in Soweto 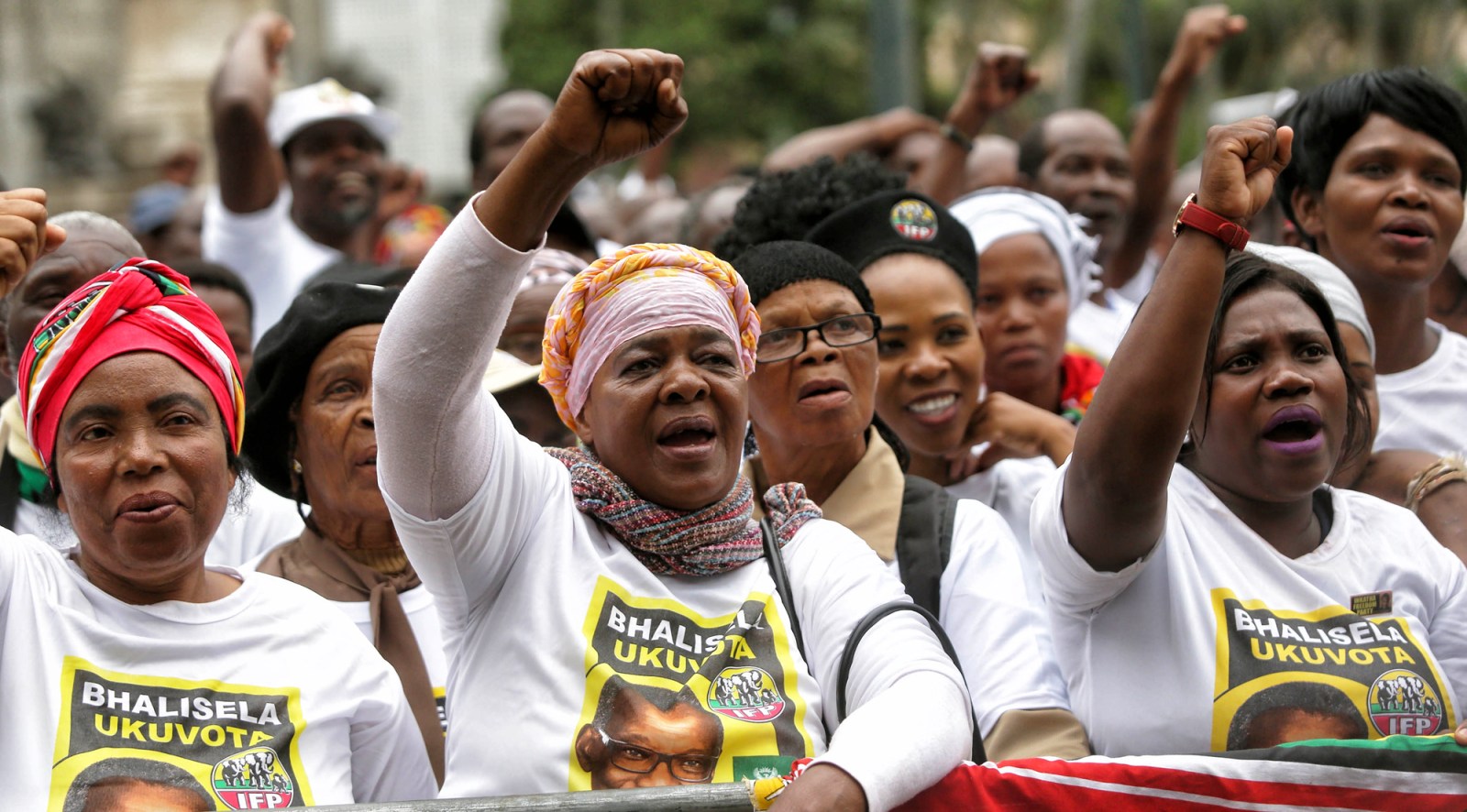 IFP supporters during the launch of the party’s voter registration campaign outside Durban city hall on January 15, 2019 in Durban, South Africa. Buthelezi, who launched his party’s voter registration campaign three days after the ANC launched its manifesto in the KNZ province, urged his supporters to get ready to vote. (Photo by Gallo Images / Sowetan / Thuli Dlamini)

On Human Rights Day the IFP celebrated its 44th birthday by launching its Gauteng manifesto in Soweto. While the party’s age counts in its favour, the same might not be true for its 90-year-old leader, Mangosuthu Buthelezi.

There were no laps around the stadium for the benefit of the adoring crowd, but when Mangosuthu Buthelezi stepped out of the silver BMW X6 that drove him onto the pitch, the sea of white T-shirts bearing his face cheered loudly anyway.

“Siyahamba naye jikelele,” they sang, “We go with him everywhere,” as he smiled and waved at them.

The relative ease with which he negotiated the thick grass of the Zola Sports Complex and walked up the ramp onto the huge stage unaided is admirable for a nonagenarian – as is his ability to hold the crowd for two hours in both English and Zulu, and then lead them loudly in song.

Buthelezi is introduced as a leader who has rubbed shoulders with anyone “from popes to presidents”, a man whom Margaret Thatcher and others praised for his courage to ensure that the apartheid government released Nelson Mandela from prison.

In the booklet distributed at the event with his printed speech, there are pictures of him attending the 82nd birthday of former Nigerian president Olusegun Obasanjo earlier in March in Abeokuta, Nigeria, and of him receiving a visit in February by Zambian ex-president and veteran Kenneth Kaunda. Another picture, from 1974, is of Buthelezi visiting Emperor Haile Selassie in Ethiopia “during his visits to African leaders to formally thank them for giving sanctuary to South African political exiles like ANC and PAC in their countries” (sic).

Of course, this statesman of South African politics has a legacy more complex than a mere freedom fighter. Unlike the ANC, with which it was close at its inception as a cultural organisation, the IFP did not support the armed struggle. But through its Self-Protection Units and Self-Defence Units, the IFP was a paramilitary force in its time and has been accused of fanning the flames of what was then called black-on-black violence in the early Nineties that threatened to derail the talks that would eventually lead to a democratic South Africa. The IFP is known to have received training from the South African Defence Force.

Perhaps keen to craft his legacy as a nobler one, Buthelezi lashed out in his Human Rights Day speech against those who accused him of being a warmonger.

“At the time I said the right to defend oneself is part of our jurisprudence. But I never once authorised the taking up of arms or the use of violence by any Inkatha member.”

The fact that supporters, to this day, carry traditional knopkieries and sticks when they attend IFP meetings – like the one on Thursday – is not helping the image he’s trying to portray.

The IFP almost didn’t make it this far, because in 1994 they were on course to boycott the election, demanding autonomy for the Zulu king, greater provincial powers and provincial ballots. It decided at the last minute to take part when it became clear that its most radical demands would not be met. A sticker with the IFP’s name was pasted at the bottom of the ballot paper just days before the April 27 elections.

Buthelezi and the African Christian Democratic Party’s Kenneth Meshoe are the only two faces that have been on every ballot paper since 1994, and who will be running for their sixth elections. Buthelezi has, however, promised to step down afterwards. He had already intended to do so at a party elective conference in 2017, but this was scuppered by party infighting.

Buthelezi’s age gives him some authority. When he speaks first-hand about the 1994 negotiations and his friendships with world leaders, he has the same living museum feel about him that former Zimbabwean president Robert Mugabe had when he would tell tales at the African Union of the founding of the Organisation of African Unity, because he was there at the time.

Those who were at the rally in Soweto thought Buthelezi’s age counted in his favour. Twenty-two-year-old Nondumiso Duma, a student from Jeppestown and member of the IFP Youth Brigade, said: “He is an old leader, yes, but he knows everything that happened in the past, and he informs us, as we are the youth.”

Thirty-eight-year-old Mzwandile Buthelezi, an IFP publicity officer from Katlehong in the East Rand, said he liked the IFP leader because he had never been convicted of corruption. Mangosuthu Buthelezi’s age – 91 this year – “is very, very good. From 1975 till now he did not have bad record, [he is] not corrupt. We trust him and he leads us.” This sentiment is reflected in the party’s elections slogan, “Trust us”.

Those outside the stadium might have had a different view. Party insiders concede that it’s tough to grow the party with an elderly leader like Buthelezi at the helm. Youthfulness is all the rage in opposition politics right now, as the Economic Freedom Fighters and the Democratic Alliance’s leaders, both under 40, can attest.

The IFP could do a little better in the 8 May elections in 2019 than in 2014, when former president Jacob Zuma with his Zulu nationalism and the splinter National Freedom Party ate into the IFP’s support. There are no reliable polls, but the party could get about 3% of the vote, a leader said. This would be a little more than the 2.4% it got in 2014 (at less than half a million, it got less than half of the support of the newly-formed Economic Freedom Fighters), but less than the 4.6% in 2009, or the 10.5% – a whopping two million votes – in 1994 (the ANC accused the IFP of cheating then). Gauteng is the party’s second biggest province, with 0.78% in the provincial vote in 2014, compared to KwaZulu-Natal, where almost 11% of votes went for the party.

IFP supporters might trust the party’s older leader, but it’s clearly not growing under Buthelezi. Despite having a diverse and talented crop of MPs and a manifesto that reflects their thinking, Buthelezi’s anointed successor has a profile similar to his own, if somewhat younger. He is KwaZulu-Natal provincial secretary, Velenkosini Hlabisa, 54. DM