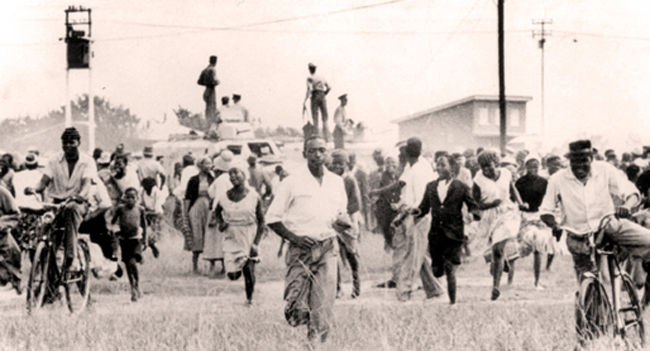 On a day that marks exactly 59 years since the murder of a group of black protesters by apartheid law enforcement in the township of Sharpeville, Gauteng, the Apartheid Museum hosted a public debate titled ‘The Black Body: (Still) a Site of Oppression?’.

However, a couple of hundred gathered at the Apartheid Museum to listen in on a public debate about whether black people’s bodies are still the site of oppression in the world, but more significantly, in South Africa, 25 years after democracy.

The debate, hosted at the plush, air-conditioned George Bizos Gallery, was moderated by author and broadcaster, Eusebius McKaiser. The panel of speakers was made up of Pumla Gobodo-Madikizela, the research chair in Studies in Historical Trauma and Transformation at Stellenbosch University; Lovelyn Nwadeyi, a Social Justice advocate, and prominent South African psychologist and scholar, Kopano Ratele.

McKaiser, as moderator, opened the discussion by saying that on this day, in 1960, those protesters who lost their lives in Sharpeville had suffered “the worst kind of oppression a black body could endure – which is to be murdered”.

He said that due to historically being treated as a “thing”, black people had long lost their personhood.

“The black body is a thing, just like it was a thing during slavery, like a shovel, or seeds that were due to be planted. We know this because Life Esidimeni happened, Marikana happened.”

“When I was at Stellenbosch University during #FeesMustFall something interesting happened. When police arrived to start shooting at us, we used white students as shields to protect us from being shot. And the police didn’t shoot when there was this wall of white bodies standing in front of us. The police were afraid to shoot the white bodies, but wouldn’t hesitate to do it to black bodies,” said Nwadeyi.

Ratele said that historically, black people have been discouraged from feeling, and that even the genesis of apartheid was based on white people’s emotions, rather than those of black people.

“During apartheid we had swartgevaar, an expression of fear by white people, an emotion. The recent events in New Zealand (where an armed assailant killed a total of 49 people in two mosques) are a modern example of fear being expressed by a white person. It’s dangerous to be black and feel.”

Gobodo-Madikizela quoted acclaimed American novelist Toni Morrison’s response to Ralph Ellison’s Invisible Man, a novel which seeks to interrogate the position of black people in United States society. The question Morrison asks of the contents of Invisible Man is: “Invisible to whom?”

Drawing from this stance, the speakers all agreed that in the modern world, and indeed modern South Africa, the enemy against the black body, as much as the systems and structures in place, was the black mind.

“We’ve got to shift out of this mind state of self-sympathy” said Nwadeyi.

Gobodo-Madikizela conveyed concern at “contemporary experience of loss of self, regardless of the fact that we’re no longer in apartheid”. She said that when one looks at the conditions that black people still live in, in a black body run state, “How can we still put the blame on racism? An event like Marikana reminds us that the black body is a canvas of oppression”.

A member of the audience, a young man named Richard from Queens High School, one of three schools which had learners in attendance, along with Fred Norman High School and Phefeni Secondary, commented that black people still had some way to go until they loosed the historical shackles from their mind.

“Is liberation actually freedom? Decolonisation didn’t happen, structures and systems (of apartheid) weren’t torn down. So when we consider this, how can we learn to appreciate ourselves as black people?” he asked.

Nwadeyi had a story to tell the audience before the debate concluded. She relayed how, as part of her job, she had been at a preschool where she overheard a conversation between two black toddlers.

“They were talking, and the one said to the other: ‘you cannot come to my birthday party because your skin looks like poo’. What is the foundation of such a statement at that age? Clearly, the problem starts at home,” she said. DM