Xenophobia does not belong in South Africa 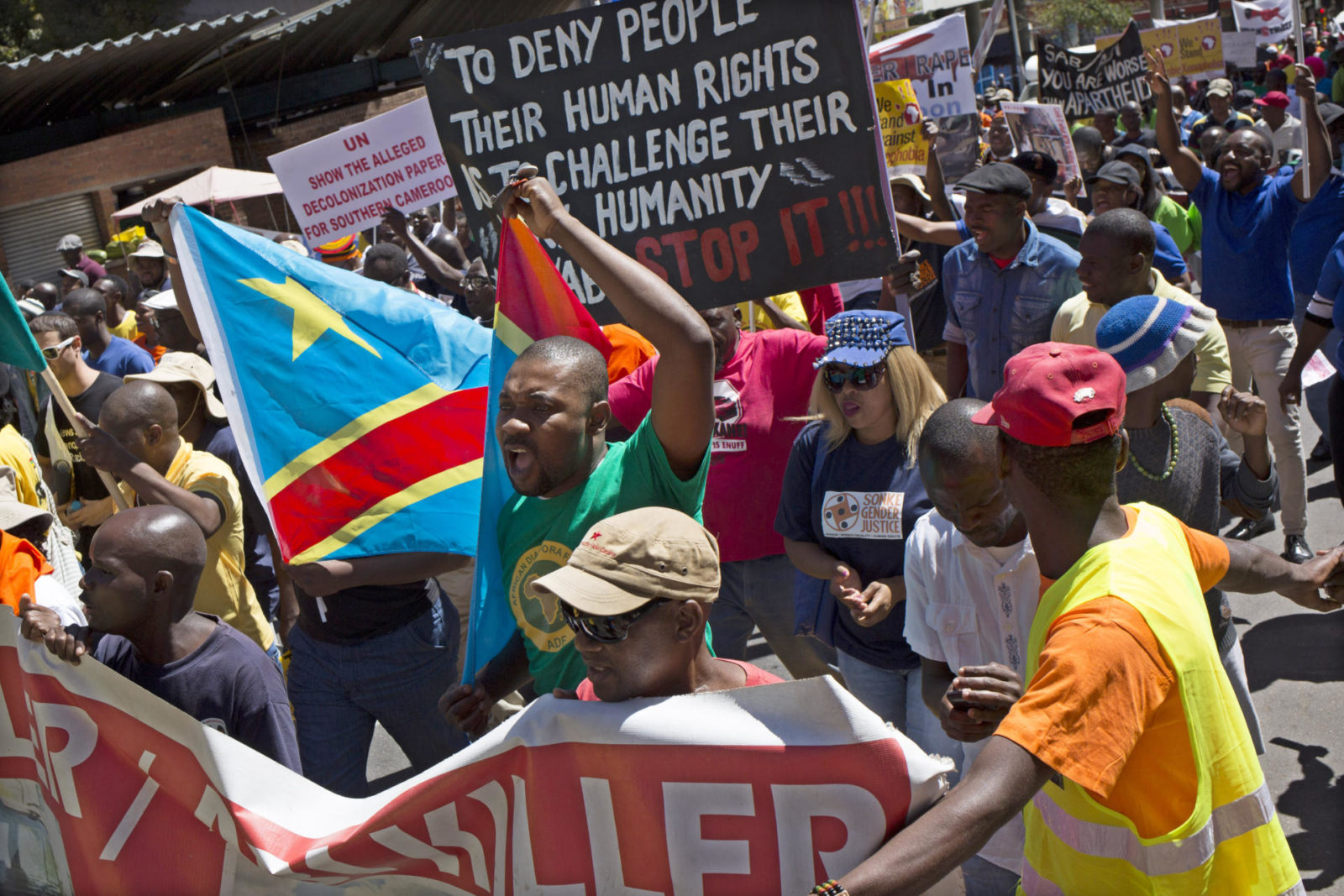 The 2019 elections have brought with them a resurgence of nationalistic populism. Politicians should quell rather than stoke this rhetoric – for everyone’s sake.

Political parties blame foreign nationals for the country’s struggles with safety, housing, unemployment, health care and education. Parties that claim to reject anti-immigrant sentiments have remained conspicuously silent in the aftermath of xenophobic violence. Some politicians have gone so far as to call for the removal of all foreign nationals.

These political actions are as impractical as they are ill-advised.

Arresting immigrants en masse will not assuage crime. In 2015, government de facto tested this technique through Operation Fiela. Tens of thousands of people were arrested in the aftermath of this directive. A disproportionate number of raids took place in immigrant strongholds. Yet crime rates rose in the year following this operation’s inception. If police were effectively arresting the perpetrators of violent crime, presumably crime rates would be decreasing instead. Targeted arresting of immigrants is not evidence-based policy. It will not mitigate crime. Instead of trying to address an unsubstantiated immigrant threat, the country could remain critical of police exploitation of, and perpetration of violent crimes against, African migrants living in South Africa.

South Africa is one of the largest recipients of foreign nationals in the world. It also has one of the largest backlogs in asylum applications. These facts could build the perception  that foreign nationals are inundating the country. But South Africa actually rejects between 90 and 95% of asylum applications. Most recent Census data indicate that only 3.3%of the people living in South Africa, documented or otherwise, are non-citizens.

All of those numbers are important to keep in mind when one hears politicians refer to foreign nationals.

Immigrants are not the source of South Africa’s housing crisis. Public housing programmes explicitly exclude non-citizens. Foreign nationals tend to live in segregated, densely populated areas where other non-nationals live. Many foreign nationals express fear of, or disinterest in, living in townships with South Africans, as they face exclusion – from community activities like pick up soccer games – and at times persecution – ranging from the demolition of property to rape. Similar to South African citizens, foreign nationals struggle to find affordable housing, must negotiate costs with landlords (often not in their native tongue), and experience unpredictable eviction. In addition to the fact that they are a statistically small proportion of people demanding housing, there is no evidence (eg organised protests or a list of demands) that foreign nationals are mobilising to threaten South Africans’ access to housing.

Foreign nationals are also not responsible for South Africa’s un- and underemployment rates. The Migrating for Work Research Consortium (MiWORC) found that 82% of the working population (aged 15 to 64) were “non-migrants,” 14% were “domestic migrants” who had moved between provinces in the past five years and just 4% could be classed as “international migrants”. The majority of unemployed people in South Africa are youth who do not have the training or work experience necessary to maintain the jobs available in the labour market. This is a skills mismatch between potential-employee capacities and the job market’s demands. Addressing the country’s employment issues will require substantial investment in education and job creation – not removing foreign migrants.

Foreign nationals face unique difficulties in securing employment. While waiting for the Department of Home Affairs to process their applications, asylum seekers often receive documents that allow them to work for three months at a time. Many employers are unwilling to hire employees for only a few months. Other employers use foreign migrants’ tenuous status as justification for underpaying or denying payment all together. Asylum seekers live in this limbo for years. Partly as a result of the way the asylum system works, a higher proportion of foreign migrants work in the informal sector than non-migrants and domestic migrants. Foreign migrants are also more likely to run their own businesses. Though reliable numbers are hard to come by, it seems that many even highly skilled foreign nationals are underutilized members of the economy. This is a loss for South Africans.

Foreign nationals are also not overloading the health care or education systems. A small percentage of refugees in this country receive state benefits. Government hospitals are unaffordable for people without up-to-date documentation. New mothers face barriers to registering the births of their children; an unknown number of children are born into statelessness in this country. Many who have been unable to secure documentation do not seek medical help at all for fear of being detected, detained and deported. Section 27 of the Constitution guarantees foreign nationals health care; South Africa is not following through on that promise.

By law, schools should accept children irrespective of their parents’ documentation status. Yet clients regularly attend the Legal Resources Centre’s clinic because principals turn learners away or deny them access to school activities. It takes letters, phone calls and emails to principals and provincial departments in order to ensure children of foreign nationals have access to classes and exams. Section 29 of the Constitution guarantees access to basic education; South Africa is not following through on this promise either.

If foreign nationals are not the source of these issues, why are politicians blaming them? The short answer is that it is easier to scapegoat than to make structural change. Not counting foreign nationals, South Africa is one of the most unequal country in the world. Denying foreign migrants health care or housing or jobs will do little to ensure that the average South African has access to these necessities.

Politicians blame foreign nationals as a smoke screen. The intent is to distract voters from the fact that officials have failed to solve South Africa’s structural issues.

Once the smoke rises, it becomes clear that politicians’ xenophobia is not only ineffective; it is also racist. Much contemporary anti-immigrant rhetoric focuses on Black foreign migrants from the African continent. Few complain about foreign nationals from Asia, North America or Europe. This is detrimental to South Africa’s trade and diplomatic relations across the Continent.

In 2008, South African citizens killed 60and raped an unknown number of African foreign nationals. Another five people were killed in 2015. Violence surfaced again in 2018. Tens of thousands of people have been displaced and significant property was damaged. In KwaZulu-Natal for instance, 5000 people were displaced following the murder of seven foreign migrants. This hurt the local economy; businesses throughout eThekwini Municipality were forced to close their doors. eThekwini Municipality and the KZN Provincial Government spent over R30-million to manage the crisis. Taxpayer money could have been used to prepare the next generation, fund infrastructure development projects or pay teachers. Instead, taxpayer rands literally put out fires. These fires were fuelled and fanned by xenophobia.

South Africa has a non-encampment policy with regards to asylum seekers. The government is looking at shifting away from this non-encampment policy to create processing centres at the country’s borders. This we believe will come at a great expense for taxpayers whilst not addressing the need for an efficient and effective asylum management system.

Two decades ago, South Africans who were victims of and/or organising against the apartheid regime fled to other countries in search of protection. It would not be a far stretch to liken politicians’ anti-migrant and xenophobic rhetoric to the swart gevaar propaganda of the apartheid government. South Africans are treating foreign migrants in ways antithetical to Mandela’s vision for South Africa. Let’s hold politicians accountable for doing their jobs. Enough with the racist smoke screens. DM

Jerusalem Hadush is a volunteer intern at the Legal Resources Centre in Cape Town and the Henry Hart Rice Foreign Residence Fellow of the Yale MacMillan Centre for International and Area Studies. Her work focuses on the consequences of forced migration and refugee policy

Miriam Gleckman-Krut is a Sociology PhD candidate from the University of Michigan in the United States and is currently a volunteer intern at the Legal Resources Centre in Cape Town. She studies institutional and state efforts to erase evidence of violence, with a focus on sexual violence