Wine farmers apply for an interdict against Black First... 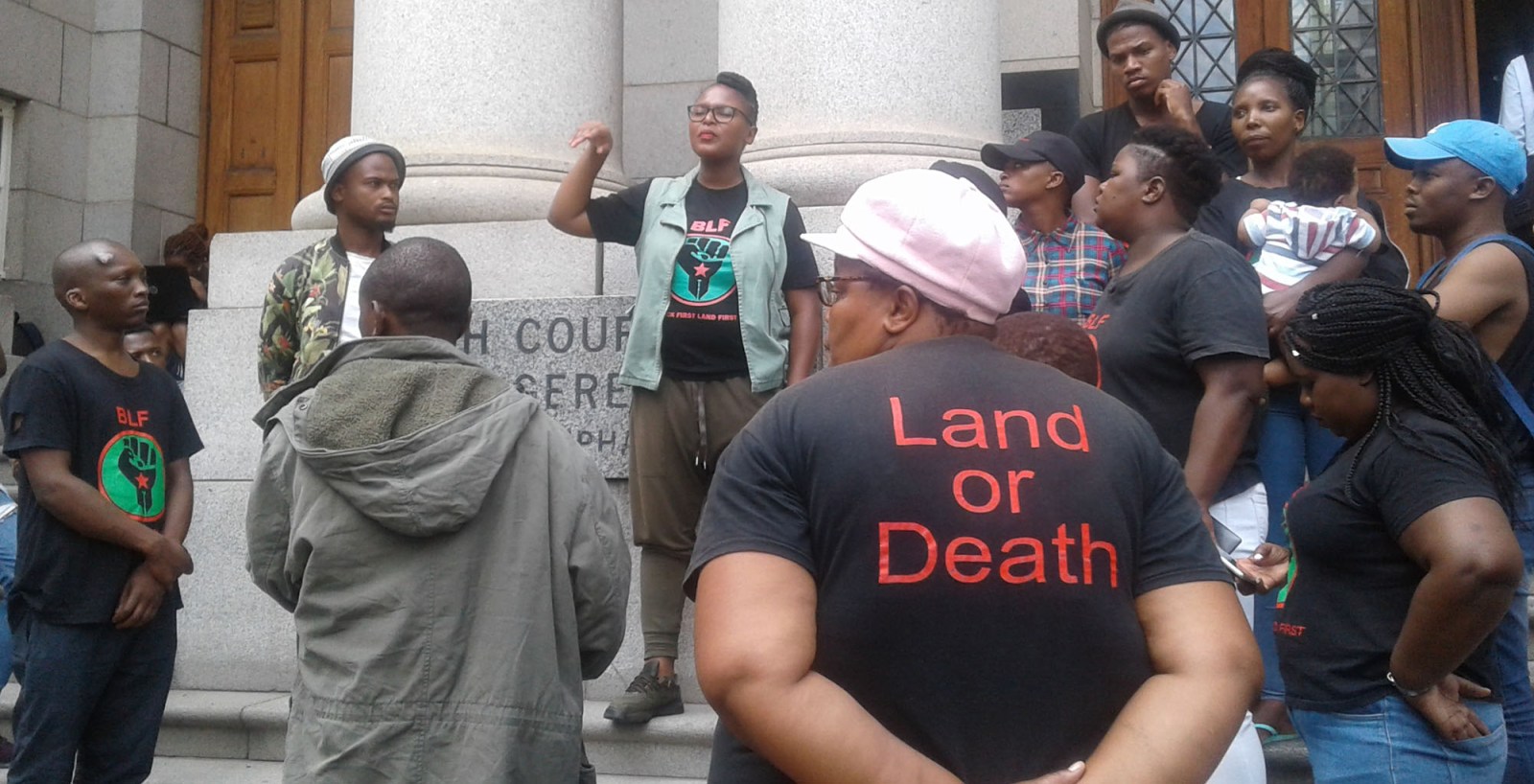 Black First Land First (BLF) supporters are debriefed by the party's Deputy President Zanele Lwana after a court hearing at the Western Cape High Court. An interdict was lodged against the party for occupying farmland in the Western Cape. Photo: Sandiswa Shoba

A number of farm owners in the Western Cape have banded together to lodge an interdict against Black First Land First (BLF) to prevent it from occupying their land. The political party has called for black people to occupy white-owned land as a means to advance land reform. It feels that parliamentarians have failed to redress the spatial injustices of apartheid and are seeking radical change ahead of the 2019 elections.

BLF chose to represent itself in court. BLF president Andile Mngxitama was not present at the hearing. He was attending a simultaneous BLF hearing at the  Equality Court in Johannesburg.

According to the 100-page court document submitted by the farm owners, BLF participated in unlawful acts in March 2019, which included “harassment, threats and incitement of others to engage in unlawful conduct against farm owners”.

Specifically, farm owners received written threats of occupation from BLF members. On such example was a note left at the entrance of Durbanville Hills which read:

“Durbanville farms are next for our black people to march. April 2019 is our land occupation date. All farm dwellers are to support their land and to now be the owners of the farms and not the slave.” (sic)

After the case had been heard BLF Deputy President, Zanele Lwana, told Daily Maverick that the political party had not engaged in any unlawful behaviour.

“We have not intimidated anyone,” she said.

She claims farm owners are pre-empting a situation that has not happened, as the listed farms had not been occupied.

Farm owners referenced the occupation of farms in Stellenbosch by BLF in 2018 as a cause for concern and as such see the interdict as an urgent measure to protect their land.

According to Lwana, farm owners are abusing the court system in order to cripple BLF and paint it in a false light.

“They are trying to hit us with legal costs so that we are not able to do our work,” she said.

As such, BLF has opted not to contest the interdict.

“They can interdict us on these farms, we will target the farms that are not listed [in the interdict]. So they will not succeed in stopping us from occupying land,” she said.

According to farm owners, the activities of BLF will cause “irreparable harm” to their operations.

“A large-scale invasion of the properties will be utterly destructive of the agricultural business conducted thereon,” the farmers’ founding papers state.

“In the event, for example, of an informal settlement being established on the properties, the farming operations will be brought to a complete standstill, causing immense and incalculable financial and reputational damage.”

“Our attitude as BLF is that there is too much land that is in the hands of white people,” she said.

“We are calling for black people in particular to organise themselves and directly occupy land, in particular, productive land that is in the hands of white people in South Africa”

The farm owners in the matter see the party’s agenda as racially prejudiced.

“[BLF] has for the last few years conducted a very aggressive campaign against the white population group in particular,” they said.

In a press statement released on Monday, BLF referred to the applicants as “white land thieves”.

“We are fighting, in particular, Johan Rupert, who owns land. He is one of the richest people in the country,” she said.

An interdict was lodged against BLF in 2018, barring it from occupying 10 farms owned by Rupert.

Rupert has, in the past, been branded as an arrogant racist.

Lwana feels that parliamentarians are not doing enough to advance land reform.

“We believe as BLF that the ANC and EFF combined make-up a two thirds majority in Parliament, so really if they were serious about amending the constitution for the benefit of land return to the people, they would use that prerogative to achieve this and they have not done so,” she said.

The final order will be heard in the Western Cape High Court on 18 April. DM