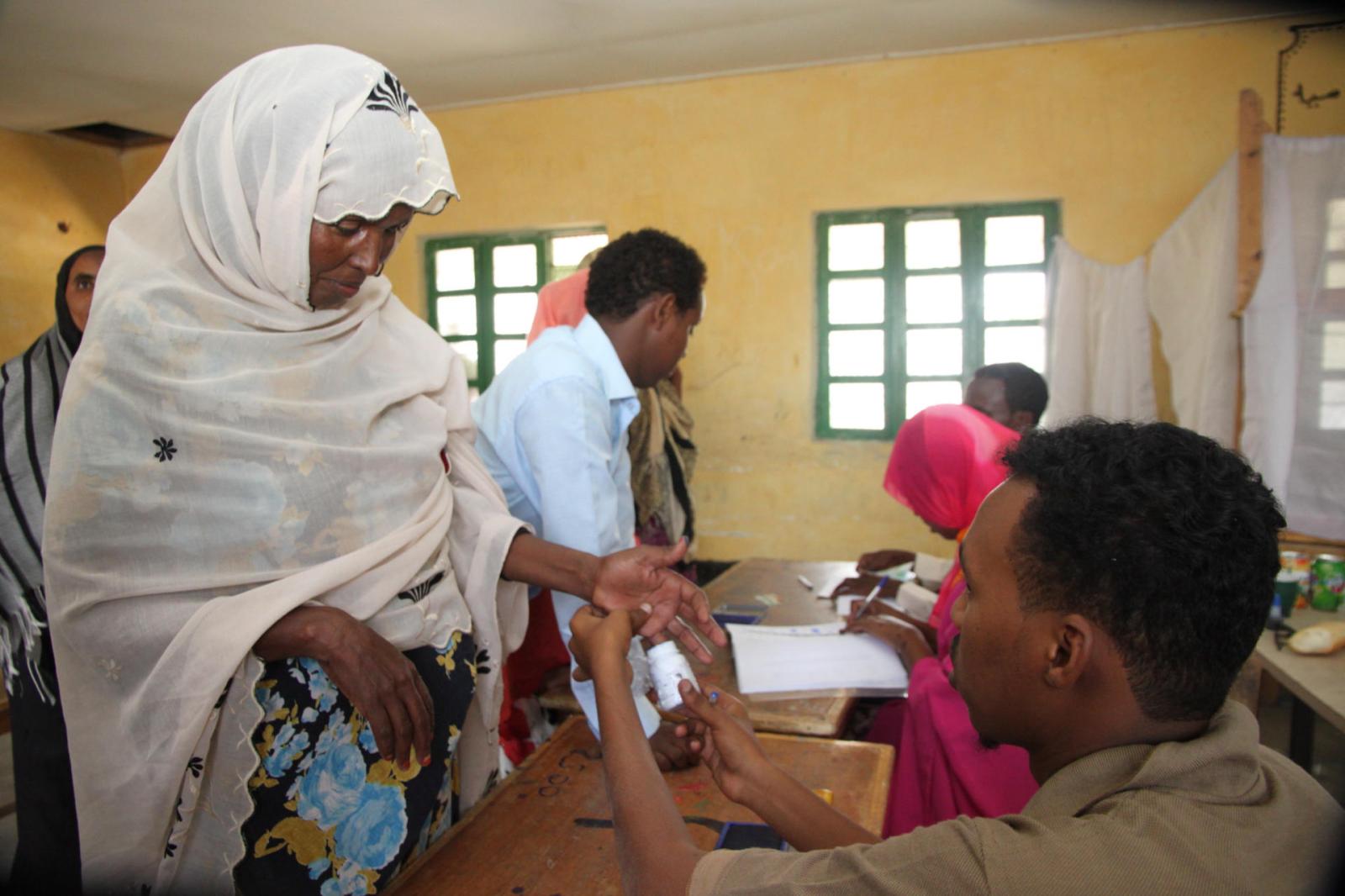 File Photo: A woman gets her finger marked in a polling station during presidential elections in Boroma, Western Somaliland, 26 June 2010. EPA/Philipp Hedemann

Despite regular presidential polls, the long-overdue parliamentary vote shows that democracy still needs to be consolidated. By Omar Mahmood for ISS TODAY

Somaliland has had six national elections since 2002. This is a relatively impressive democratic record but while regular polls are admirable, they haven’t been without problems.

An example is the current wrangling over delayed elections for the Lower House of Parliament and the local councils, meant for this month but postponed to December. The Upper House of Parliament, the Guurti, comprising selected clan elders, announced the postponement on 21 January following failed negotiations between Somaliland’s three official political parties.

Despite conducting multiple presidential polls, the parliamentary elections are long overdue. The first and only election of Somaliland’s Lower House was in 2005. Since then, at least five delays have pushed back the process. This means those elected in 2005 for five-year terms have now served 14 years, without a check on their performance.

Two interrelated issues are at play. First is a technical one – the National Electoral Commission (NEC) says it requires 10 months to prepare for the elections. Not only are 82 parliamentary positions up for grabs, but also those of the local councils. So there will be many smaller and localised contests, rather than one big one as in 2017.

The second issue is political. The main opposition party, Waddani, has refused to work with the NEC, contributing to the delays. Waddani contested the 2017 presidential poll results but withdrew its complaints after episodes of violence. While agreeing to move on, Waddani chairperson and presidential candidate Abdirahman Irro said he still disputed the results, but rescinded his complaints for the greater good of Somaliland’s stability.

A mission of 60 international observers managed by the University College of London’s Development Planning Unit noted that irregularities (such as underage voting) occurred in 2017, but weren’t enough to affect the result. Rather some of the technical preparations in the lead-up to the poll, such as using an iris scanner for the first time to register voters, were applauded.

While the 2017 process had some flaws, they weren’t enough to overturn the election results. Yet civil society representatives told the Institute for Security Studies (ISS) in Hargeisa in February that this election proved divisive, and deepened political competition among major Isaaq sub-clans in Somaliland. This also raises questions about the quality and trajectory of Somaliland’s democracy, beyond simply holding polls.

Waddani continues to disagree that the current NEC members should prepare the ground for the next election. The party argues that the NEC oversaw a flawed election in 2017, so how can they be trusted to conduct a better process now?

Waddani has proposed dismissing the current NEC, but the presidency and the ruling Peace, Unity and Development Party (Kulmiye) have balked at these demands, saying the NEC is competent. The third and smaller political party, UCID (For Justice and Development), has recently gravitated towards Kulmiye on these matters.

Both Waddani and Kulmiye have backed themselves into a corner. Waddani believes the NEC was responsible for its 2017 loss. Kulmiye is loath to accept Waddani’s complaints and replace all the commissioners as that would call into question the legitimacy of its 2017 victory.

Negotiations are continuing, but a recent meeting to discuss these concerns was reportedly postponed. In order for the Lower House process to move on, a compromise must be reached.

Civil society representatives lamented to the ISS the difficult situation in which neither side is completely right or wrong. Many believe Waddani’s complaints should be heard, and that the government hasn’t done enough to move beyond the impasse.

There is also historical precedent. When Kulmiye was in opposition in the mid-2000s, it complained about the composition of the NEC and had it replaced. Some wonder what’s so different now that Kulmiye is in power.

Most of those interviewed by the ISS doubted that the polls would happen this year, given the required 10-month preparation time, and the difficulty in getting the parties to agree ahead of that.

A complicating factor is the need for a new electoral law ahead of the contest that would deal with the representation of women and minorities. There is also pressure by some regions to reallocate the division of parliamentary seats ahead of the vote.

A chain reaction is threatening Somaliland’s fragile electoral gains – one that has its roots in the failure to heal after a divisive 2017 contest. It underlines the fact that while Somaliland has an admirable democratic record in terms of presidential and other polls, the inability to consolidate that record means that each process is subject to new questions and frequent delays.

That the political parties are able to debate the electoral process in an open and non-violent manner shows how far Somaliland has come. But the failure to compromise indicates how divisive electoral politics has become, with each election cycle setting the stage for intense contestation in what some regard as an increasingly zero-sum system.

Both sides will need to compromise to advance Somaliland’s democracy and consolidate the gains made thus far. DM