It was a rough start to the week for the Passenger Rail Agency of South Africa (Prasa) when a “technical glitch” led to the country’s first citizen, President Cyril Ramaphosa, being stranded for more than two hours on a metrorail train between Tshwane and Johannesburg.

Ramaphosa was on the campaign trail with Gauteng premier David Makhura, speaking to commuters as they were busy with their morning commute.

But according to News24, the usually 45-minute trip turned into an almost three-hour journey.

Prasa spokesperson Sipho Sithole told ENCA the delay was caused by a technical glitch during which a driver on another train was stoned, allegedly by commuters.

Prasa said Metrorail Gauteng was affected by major delays in the northern part of the province.

Commenting on the delay, Ramaphosa said: “Levels of frustration are quite high, but people surprisingly have been patient; patient because they are hoping the ANC would see what’s happening and bring about changes.” 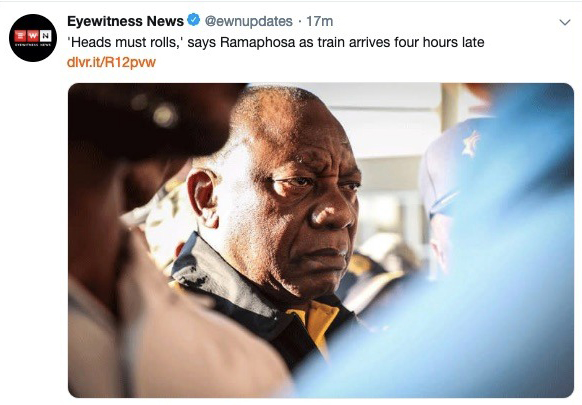 The DA said it had made many calls for Ramaphosa and the government to intervene to deal with rail problems.

“Train delays, chaos and crime have become the order of the day on our trains,” said DA spokesperson Solly Malatsi.

The DA is campaigning for provincial control of rail services, especially of the embattled service in the Western Cape.

Ramaphosa’s disastrous trip comes just days after four top Prasa officials were suspended by the agency’s board over allegations of corruption.

In a statement released by the state owned entity, the board said that “over the past few years, Prasa has been dogged by allegations of improper, irregular, corrupt, fruitless and wasteful expenditure by various employees… at all levels of the organisation. These allegations are contained in various reports that have been produced after investigation by appropriately qualified and experienced professionals and have been submitted to the board of control”.

Details of the charges against the four and of the disciplinary procedures are yet to be announced.

Interim board chairperson Khanyisile Kweyama said at the time of the suspension:

“The extent of improper, fruitless and wasteful expenditure that is reported by various independent professionals shows a disturbing culture of impunity which has to be stemmed at once.”

Prasa CEO Sibusiso Sithole resigned in February, just nine months after being appointed to the position, according to Fin24. DM