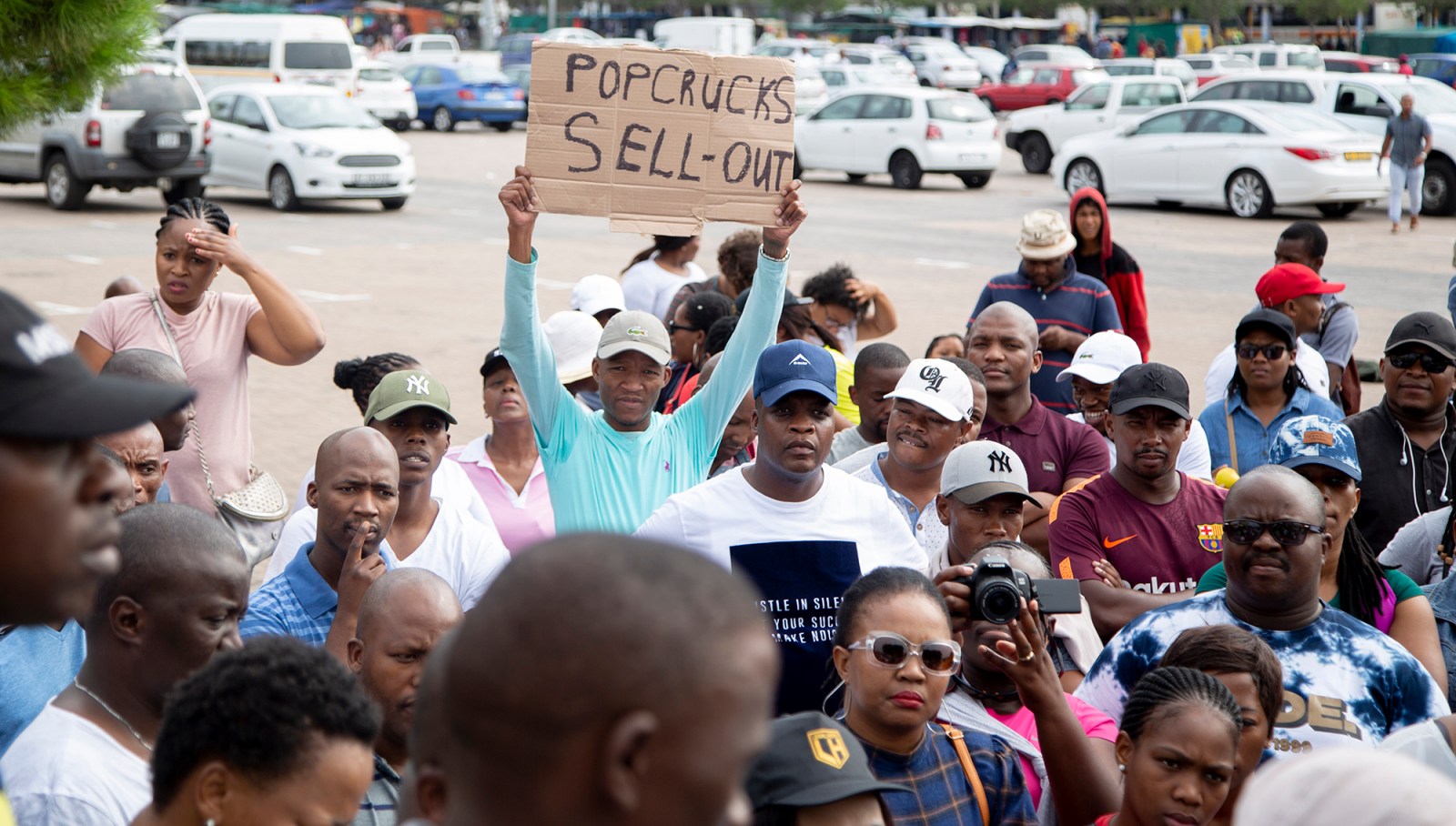 A protestor at the SAPAWU march on Tuesday 19 March 2019 holds a sign that says POPCRUCKS SOLD OUT at the Grande Parade in Cape Town. Image: Tessa Knight

A new police union is calling for a re-look at the promotions of newer police officers over experienced cops who have worked within the SAPS for more than 10 years. At a march on Tuesday, they gave the police ministry seven days to rectify the situation.

A new police union marched to Parliament on Tuesday calling for ministerial intervention to stop what they describe as unfair promotions of junior policemen from specialised units rapidly over experienced police officials who have been in the “same positions”.

The marchers, affiliated to the South African Police and Allied Workers Union (SAPAWU), have called for a relook into the promotions of junior police officials attached to specialised units such as the Tactical Response Team, the National Intervention Unit and the Counter Assault Task Team.

In a petition, the union claimed that: “Some of these members have nine months experience in the police (but) the Commissioner overlooked members that are not attached to these units with various Police courses with +- 10 years of experience and some of those members that were not regraded are in possession of Diplomas and Degrees.”

“We’ve got a number of years, we have experience, we’ve faced more danger,” said Bonga Makuliwe, chairperson of the newly formed union.

Makuliwe said the union, which formed officially over the weekend of March 16 and 17, had a mandate from its members who want to challenge the promotions of those who were promoted despite having less experience.

On Tuesday, several hundred plain-clothed police officers marched from the city centre towards Parliament. The march was nearly stopped when it was discovered that the protesters did not have the necessary permit from the City of Cape Town to hold a march within the city.

But SAPS public order policing let the march go ahead and just over 200 police officials marched to Parliament hoping to hand over a petition to police minister Bheki Cele and national police minister Khehla Sitole, with a list of demands.

The petition calls for the following:

The marchers were met by Parliament police committee chair, Francois Beukman, who told them that the committee takes the issue of promotions within SAPS seriously.

Beukman said there could not be a delayed result on the issue of promotion as the issue was discussed two weeks ago in the committee.

It was “unacceptable that members have to wait three years on this issue”, said Beukman.

Beukman said he would take note of the petition and invited the leadership of the new union to a meeting inside Parliament.

The petition gives the police ministry seven days to respond to its list of demands.

Treasurer of SAPAWU Mphangeli Jingqi, who is a sergeant within SAPS, told the crowd, “at last our petition has reached the right hands”.

Jingqi told journalists “the masses will give us direction” after seven days, should they not get a response. DM.