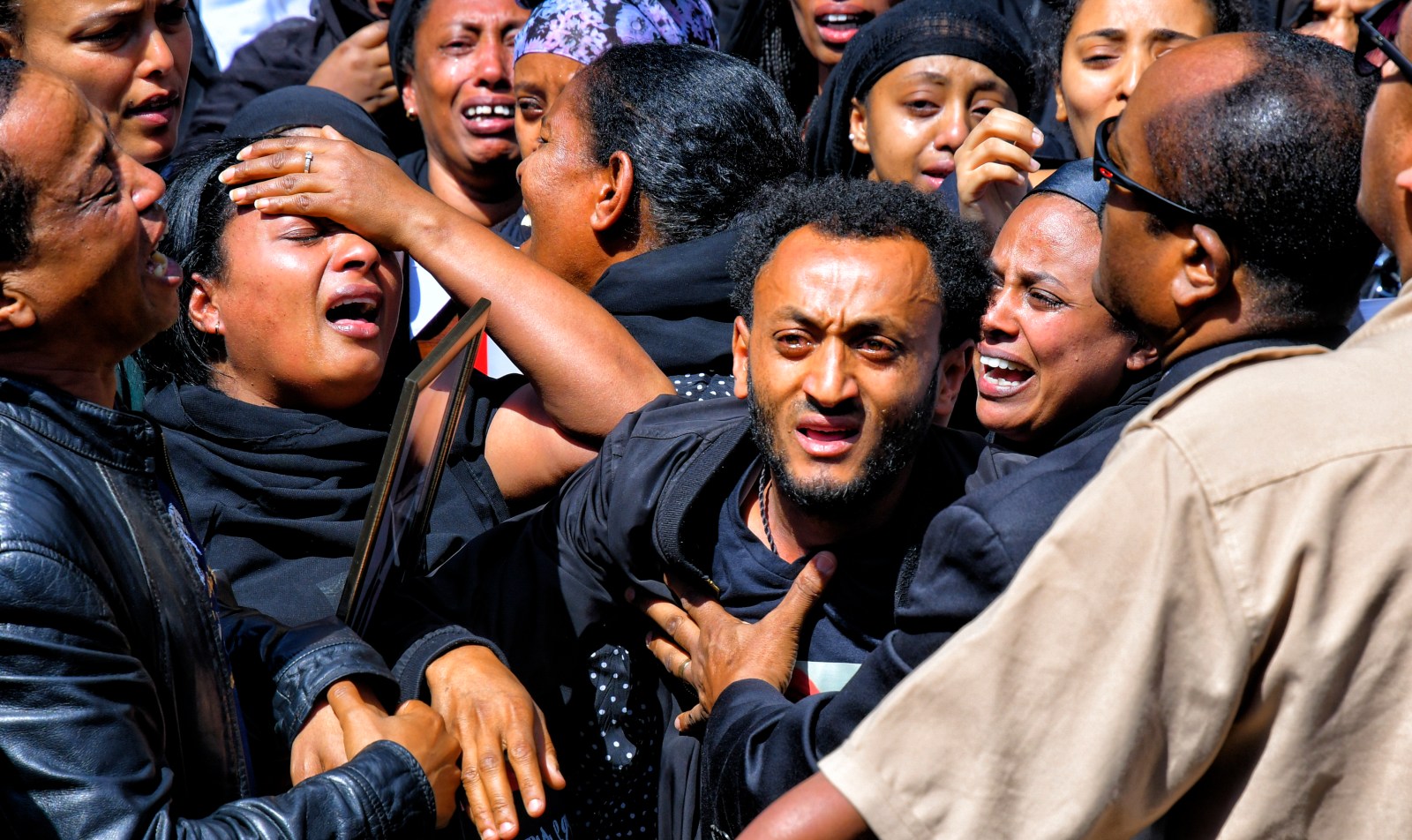 Family members react as they attend a burial service for the victims of the Ethiopian Airlines plane crash at the Holy Trinity Cathedral in Addis Ababa, Ethiopia, 17 March 2019. EPA-EFE/STR

Researchers still need to develop robust methods that will make intelligent systems stable and avoid disasters such as those seen in the Boeing 737 Max 8. What are African universities doing to create a cadre of graduates that are able to understand complex technologies such as automation, artificial intelligence and control systems?

In one of the deadliest aviation accidents in recent times, the Ethiopian Airlines Boeing 737 Max 8 crashed a fortnight ago — just eight minutes after taking off, killing all 157 people on board.

China was the first country to ground this aircraft, less than 24 hours after the crash. It was followed by others, such as the European Union, Canada, Japan and South Africa. What is interesting is that the US did not rush to ban flying this aircraft. Boeing, the aircraft’s manufacturer, is an American company closely linked to the political establishment of the US. In 2018, Boeing allegedly spent $15-million on political lobbying. Boeing is the largest supplier of aerospace goods and services to the US government. In fact, Boeing is the maker of Airforce 1, which is an aircraft used by the President of the US. The fact that the US was one of the last countries to ground this aircraft is an example of the possible toxic confluence of politics, money and lobbying.

It seems that the Boeing 737 Max 8 had a problem with the pitch. It did not know whether it was climbing, descending or going straight. It seems that a number of people before this latest crash identified the technical problem with this aircraft. It is reported that in the US, one pilot had to switch off the autopilot as the aircraft was pitching down even though it was supposed to be climbing. The problem with this aircraft is that its flight control system is not stable. What is the flight control system?

If a pilot wants to climb to an altitude of 800m above sea level, the system will make this happen by determining the speed, pitch, roll and yaw configuration schedules. Therefore, for the objective of reaching an altitude of 800m, the system requires information such as the present altitude, speed, pitch and so on. This is because the aircraft cannot climb to a particular altitude unless it knows its present altitude. We call the concept of knowing the present state, altitude, speed and so on a feedback mechanism. Thus, the control system consists of a data acquisition device, a model that makes sense of the measured data, and a feedback mechanism. The feedback mechanism serves to ensure that the path that the control model recommends in order to reach a desired goal or objective is still valid.

It seems the Boeing 737 Max 8 had a problem with knowing its pitch and, consequently, it did not know whether it was going straight, up or down. There are a few reasons why aircraft can have incorrect information on the pitch. One can be because of the failure of sensors used to measure the pitch values. This can be because of specific instances or systematic reasons. If this problem is systematic, then there might be a factory flaw with the manufacturing of the sensors. Another reason why control systems fail is instability. In this regard, the control system should be designed to avoid operating regimes that will make it unstable.

The Fourth Industrial Revolution is driven by intelligent technologies such as artificial intelligence and machine learning. Thus, controllers of the Fourth Industrial Revolution are intelligent, and this makes automated systems intelligent. However, because of this infusion of intelligence into these controllers, these systems are vulnerable to stability problems. Researchers still need to develop robust methods that will make these intelligent systems stable and avoid disasters such as those seen in the Boeing 737 Max 8. By using advances in artificial intelligence, it is important that these systems are designed with critical systems above them that monitor and supervise them.

When an aircraft such as Boeing 737 Max 8 crashes, something called a black box, which records the aircraft information, is obtained in order to understand what caused the crash. It is reported that the black box recovered from this disaster was taken to France to be analysed. This raises a crucial question, which is the capability of the Ethiopian industrial sector to understand these modern technologies. What are African universities doing in order to create a cadre of graduates that are able to understand these complex technologies such as automation, artificial intelligence and control systems?

During a long drive, one gets tired — manual driving brings about driver fatigue. Fatigue or drowsy driving is a cause of accidents. During a long flight, I have always wondered about pilot fatigue and the associated danger. I am relieved that the autopilot contributes to the flight path and in newer planes, the ability to land in dangerous weather conditions. Therefore, there is also a major positive side of the Fourth Industrial Revolution associated with the autopilot functionality.

Professor Marwala is the Vice-Chancellor and Principal of the University of Johannesburg and author of a paper, Finite Element Model Updating Using Wavelet Data and Genetic Algorithm, in the American Institute of Aeronautics and Astronautics Journal of Aircraft.