Drought and domestic violence: Fallout from a changing climate 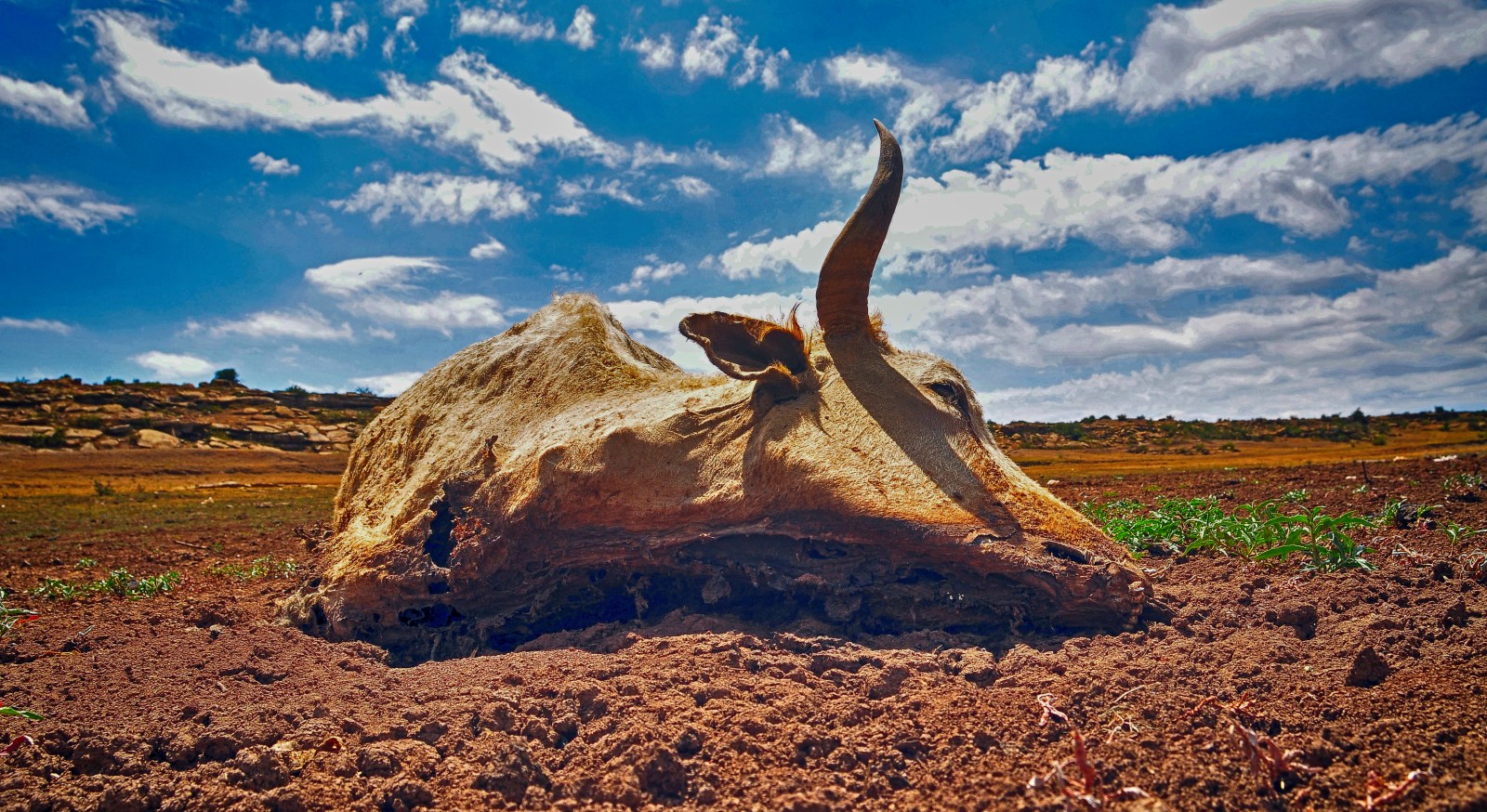 A carcass of a cow lies in a dried-out cachment dam in Senekal, Free State. (Photo by Gallo Images / Dino Lloyd)

On Sunday 17 March, against the background of the cyclone that was claiming lives and wreaking havoc in Mozambique and Zimbabwe, drought-affected communities from across South Africa gathered in a small room in Johannesburg. The stories were not a missive from our climate change future. They were a window into the country now.

“Boreholes are drying up. Birds are eating mammals. Wild animals are coming to our farms to eat.”

This, then, was the face of climate change in South Africa, an upending of nature that was redolent of January’s massive fish die-off in Australia, or the Antarctic temperatures that had killed students in February in the US Midwest. For Adam Mubanda of Giyani in Limpopo, a leading member of the Inyanda National Land Movement, the word for it was “pathetic”: by which his expression suggested that he meant tragic and pitiful, as opposed to absurd or ridiculous, although he didn’t deny the latter.

“As a movement, we do try to sensitise our people to climate change,” Mubanda went on. “It’s very unfortunate that people are so colonised in their minds that they believe that issues of climate are only known to God.”

The occasion was a roundtable of drought-affected communities from across South Africa, convened in Johannesburg on Sunday 17 March by the Co-operative and Policy Alternative Centre (Copac). In the background, as mentioned by Copac’s Vishwas Satgar, was the cyclone that had just two days before made landfall in Mozambique, claiming at the latest count 48 lives in Mozambique’s Sofala province and 39 lives in Zimbabwe, with the death toll rising through the afternoon and 850,000 people in danger as the storm began to move west.

As it turned out, while we were sitting in the room, Zimbabwe’s state-owned Herald newspaper was putting together an editorial calling on its own government sponsors to “wake up” to Cyclone Idai’s message: Climate change was real; the country had better prepare.

Given that everyone present was already on the frontline, it was not news at this event that the governments of southern Africa had been asleep to the extreme weather events that were now pummeling the continent with increasing frequency and more devastating effect. As Satgar pointed out, when it came to the drought, the South African government had only declared a crisis in 2018, after rural food systems had collapsed.

And here was what that meant to Nosintu Kwepile of the Nqamakwe Farmers Alliance, Amatole district, Eastern Cape:

“The taps have been closed for eight months. The rivers are dry. We wanted to see through research how drought and climate change are affecting people. We found out that it is actually the cause of domestic violence.

“To give one example, and I’ve witnessed this, there was a woman who was a farmer; she had her garden, and the husband wasn’t working, he’s an alcoholic. They were dependent on this garden. And now, because of drought, she stopped. This family of five had income grants from two children, only R800 a month. Now because there is not enough food at home, this guy is beating up this woman.”

There was another incident that Kwepile wanted to share; something else, she said, that was making her emotional.

“The children now have been given the duty, before they go to school, to go fetch water for the livestock. Not for them to wash, not for them to eat pap. But for the sheep to drink. Because the people have given up on cattle, the cattle have run away from us, they have been looking for grass and all that, some of them are dead.

“It’s now only sheep that are able to pick up on the small grass. So the children have this duty of fetching water for those sheep. And this guy actually beat up his two boys, because they didn’t bring water. He also took away their food. It happened there, I know the household, it’s in our communities.”

Like the government’s indifference, it would have come as no surprise to these delegates that the link between violence and a heating world was an established scientific fact. In 2014, a report in the Journal of Environmental Economics and Management had shown that “temperature has a strong positive effect on criminal behaviour,” with climate change projected to cause an additional 22,000 murders, 180,000 cases of rape and 1.2 million aggravated assaults in the United States between 2010 and 2099. What was less well known was that hurricanes Harvey and Michael, monster storms that hit the US in 2017 and 2018, were accompanied by a surge in “intimate partner violence”.

At the round table in Johannesburg on Sunday, it was a theme that came up time and again. For Aaron Ranayeke, the burden carried by rural women of “ensuring that people eat at a household level, but also at a community level” was, outrageously, placing these same women in harm’s way. Ranayeke was talking specifically about the thirst-lands around Keiskammahoek in the Eastern Cape, where, he said, women’s rights were screaming to be included in the climate justice debate.

But as Ranayeke knew, when it came to the role of women and the hard edges of climate change, there was nothing exceptional about South Africa’s rural areas. As we were about to hear, in the informal settlements of Cape Town, where “day zero” had been a lived reality for years, just keeping a household running had become an exercise in impossible choice.

“Women telling me stories of, ‘I must wash my washing today, but I must rinse it tomorrow,’ ” said Faeza Meyer of the Cape Flats-based African Worker Commons Collective. “I must make choices of whether I’m going to bath my children tonight, or I’m going to cook. That’s how difficult. Truthfully so, it’s the women that struggle.”

Meyer also wanted us to know that when the country’s educated and well-intentioned came to these areas with their theories and their plans, they were often coming with their preconceptions — and worse, she suggested, sometimes they were coming to do nothing more than look.

“The communities in informal settlements may not know the meaning of ‘climate change,’” she said, “but they know that something in the city is wrong. There’s too much heat, there’s too much rain. Because we are the ones that suffer. When there’s floods, we can’t get out of the community. When there’s fires, hundreds of our people are without shelter.

“The stories, you know? A woman telling me a story of, ‘I heard my son’s head burst inside a shack.’ What comes out is, ‘If only we had water, we would have been able to save him.’ Recently there was a fire in one of the informal settlements, and the fire-trucks came but they ran out of water. The community had to stand and watch their things burn. They tried to connect to the hydrants, but there was nothing.”

And nothing, Daily Maverick learnt, is what many people in the room would have had if they didn’t have their activism. The pull of despair was bubbling just below the surface. But later that afternoon they were going to work on a Climate Justice Charter. They were going to continue taking the fight to the government, and to what they were calling the “carbon capital bloc”.

Then, on Monday 18 March, they were going to march on the South African National Editors Forum and the Press Council. The media weren’t listening, they said, because we didn’t yet have the ears to hear. DM