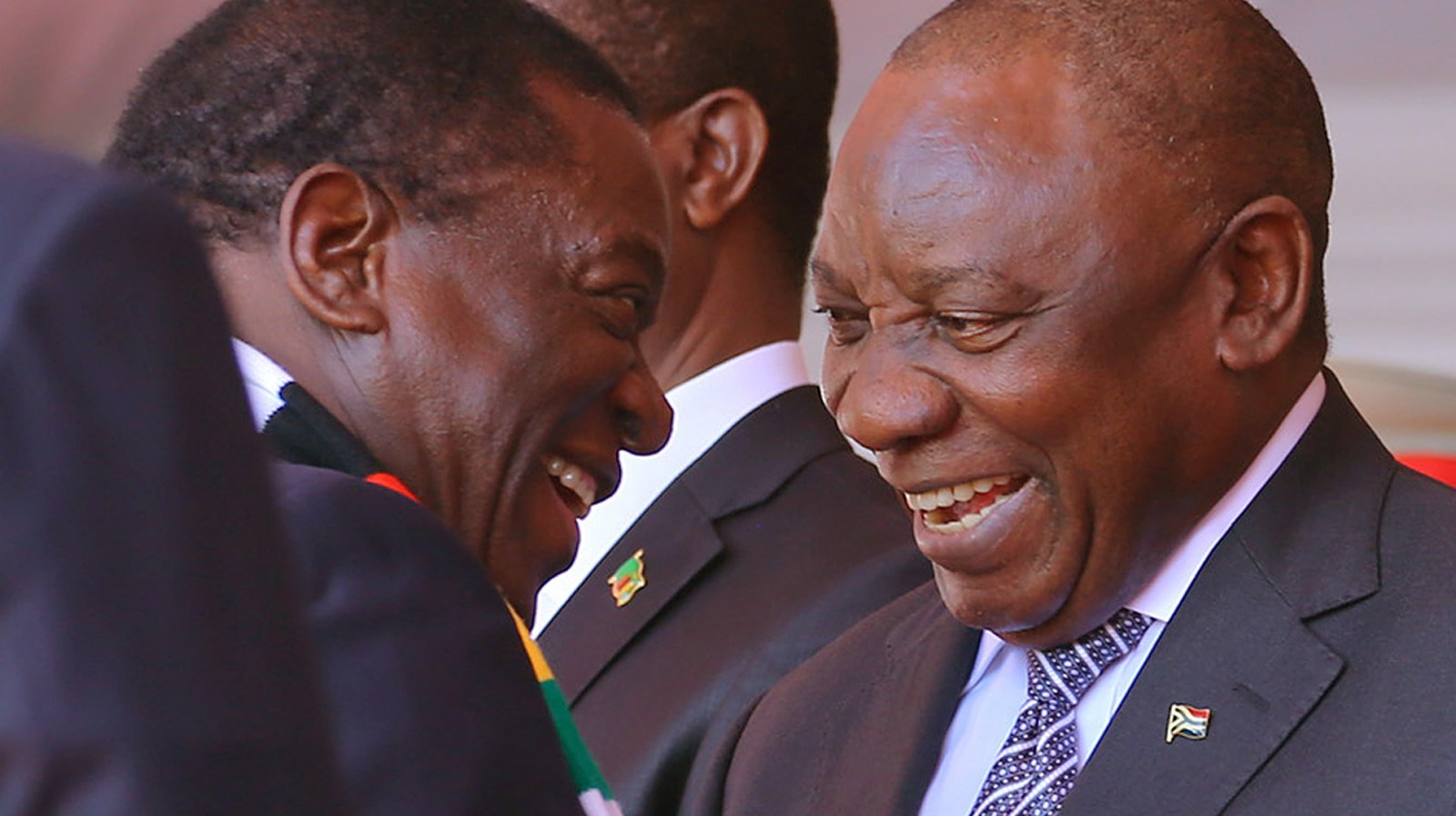 While South Africa believes sanctions should be scrapped in Zimbabwe, analysts indicate that the sanctions narrative has been an easy scapegoat in addressing the real issues affecting the country.

Tears streaming down her cheeks, Dr Azza Mashumba, a paediatrician at Parirenyatwa Group of hospitals in Harare, could not hide her anguish over the dire situation at the hospital.

“Nobody is listening to us. I have knocked on a thousand doors. I come to work and do my very best, but my output is stillbirths; my output is disabled babies.

“This is heartbreaking for me… but we are struggling with the work we are doing, we are not working, we are not helping patients,” says Mashumba with tears still flowing down her cheeks.

This comes after senior medical practitioners and consultants scaled down their operations on 12 March 2019 demanding that government provides the necessities that enable them to deliver the required health services.

A letter signed by Dr Matthew Wazara, a specialist surgeon working at Parirenyatwa Hospital, reads: “The authorities indicated that active effort was being to restock the hospital with supplies and address the challenges in the immediate term but accept that the hospital has had to run on an emergency mode in the interim while the supplies are being secured.”

Dr Wazara adds, “This is obviously not the best option and leaves a lot of patients without the care they need, much suffering has to be endured and lives are at risk until the situation is returned to normal and ideal.”

Meanwhile, the hospital has called for donations from well-wishers to alleviate the suffering of patients. However, minister of health and child care Obadiah Moyo was quoted in the state daily, the Herald, as saying they have secured US$1-million for the procurement of medical supplies and equipment.

Earlier last week South African President Cyril Ramaphosa was in the country with his team of five ministers during the third session of the Zimbabwe/South Africa Bi-National Commission. Ramaphosa continued with his sanctions mantra as a solution in an attempt to bring back normalcy to the economic crisis that has rocked its neighbour for more than two decades.

“South Africa made a clarion call to assist Zimbabwe and support the reform efforts by lifting unfair and unjustified sanctions imposed on Zimbabwe. We want more than just that (removal of sanctions), we want more meaningful support given by international development partners to Zimbabwe as the country deserves the support that the world can give,” said Ramaphosa.

The commission is a biennial meeting initiated in 2015 by the two countries to strengthen bilateral ties, to be sustained and nurtured through economic partnership. During this visit, Ramaphosa signed two memoranda of understanding, on agriculture, and science and technology. However, previous agreements have not seen the light of the day, as none has been implemented.

The crisis in Zimbabwe has had a debilitating effect on the South African economy as it is a major recipient of the country’s diaspora — with at least two million Zimbabweans living in the neighbouring country.

Zimbabwe is among South Africa’s top five trading partners with more than 120 companies doing business in Zimbabwe, across several sectors.

But the question remains: Are sanctions the elephant in the room?

Will the removal of sanctions revive Zimbabwe’s economy?

While the European Union has taken heed of the call to remove sanctions on Zimbabwe, US President Donald Trump has extended sanctions for one year.

In a notice announcing the extension, Trump said the sanctions will remain until President Mnangagwa and his government change Zimbabwe’s laws restricting media freedom and protests.

In 2001, the US Senate passed the Zimbabwe Democracy and Economic Recovery Act, which imposed travel bans on Zimbabwean officials. It also denied Zimbabwe access to international loans.

While South Africa believes sanctions should be scrapped, analysts indicated that the sanctions narrative has been an easy scapegoat in addressing the real issues affecting the country.

Daily Maverick spoke to Dr Godfrey Kanyenze, director of the Labour and Economic and Development Research Institute of Zimbabwe, who said there was a need to dwell more on addressing poor governance, lack of reforms, corruption, misplaced priorities and the military being used as an instrument of dealing with dissent.

“It’s almost become a meeting to gang up to call for the removal of sanctions, without really equally talking about the underlying factors that resulted in those sanctions being imposed on Zimbabwe.”

Senior researcher at the Institute of Security Studies Derek Matyszak does not see how the removal of sanctions will help to solve the currency crisis facing the country.

“Sanctions statements alone won’t be enough; rather they should be coupled with condemnation, particularly looking at the heavy-handedness of the military when they were responding to social unrest. In the absence of that, SA foreign policy will look more like quiet diplomacy,” Matyszak said.

In January, when the Zimbabwe Congress of Trade Unions called for a three-day nationwide protest against a more than 150% increase in fuel prices, the result was 17 people killed, hundreds injured, beaten up and tortured, and mass arrests and trials.

Matyszak highlighted that there were serious structural problems that include a pervasive military influence in the running of the country’s economy that should be looked into, including piling pressure on President Mnangagwa to walk the talk.

While the country is in urgent need of financial support or capital injection to bolster the economy, it’s not been a stroll in the park for Zimbabwe to get lines of credit.

“Countries are not eager to extend lines of credit to Zimbabwe because there is no guarantee of payment when they do. No one is keen on giving a straight bailout to Zimbabwe unless they know they are going to get their money back,” says Dr Kanyenze.

International Monetary Fund (IMF) spokesperson Gerry Rice told the media that there was no financial programme agreed to between Zimbabwe and the IMF. Instead, there have been talks and engagements — and the IMF is looking to be supportive as it can.

“The IMF is trying to help; we are engaged with them (Zimbabwe) on how we can help them as much as possible. Given the absence of a financing programme… it depends on the clearance of arrears to other international financial institutions and financing assurances from bilateral creditors and agreement on policies,” says Rice.

Speaking on currency reforms that saw the US dollar now pegged at a 2.5 exchange rate with the bond note and Real Time Gross Settlement, Rice said: “it was a step in the right direction”.

“The success of the currency reforms will depend on the implementation of an effective overall monetary policy framework supported by market-determined interest and exchange rates together with prudent fiscal policies.”

In December 2018 South Africa turned down a request from Zimbabwe for a $1.2-billion loan, stating it did not have the money.

“There is nothing that is going to cause economic revival other than capital injection to aid the country’s economic crisis,” Matyszak said.

“We should focus on what we can do as a country, knowing that we cannot outsource solutions to our problems. None but ourselves, we can’t really harp on about external factors, whether real or imagined. It’s us. No one can do it for us other than ourselves,” said Dr Kanyenze.

As alluded to by Ghanaian author Nana Awere Damoah who said:

While it’s critical that the country starts to build now, however, Zimbabwe’s economic turnaround is still a far-fetched dream for many as the situation on the ground remains catastrophic.

As long as there are no sound and concrete programmes and policies, which are implemented, it remains as before: mere rhetoric. There is indeed a need for a new template in addressing the country’s problems. DM