US insists relations with SA can survive differences 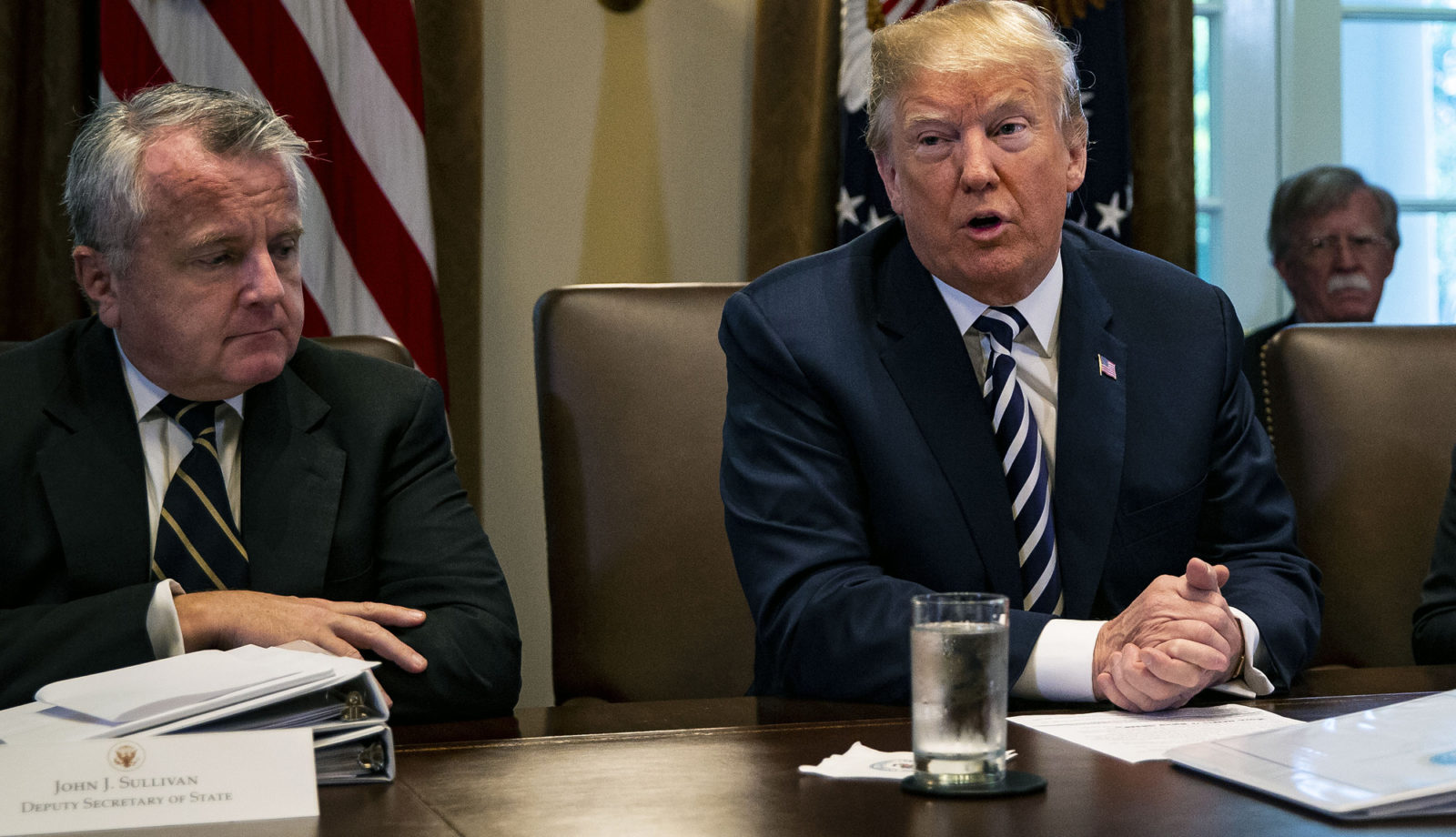 President Donald Trump speaks about the hostages released from North Korea, beside John Sullivan (L), US Deputy Secretary of State, and Patrick Shanahan (R), US deputy secretary of defense, during a Cabinet meeting in the Cabinet Room of the White House, in Washington, DC, USA, 09 May 2018. EPA-EFE/AL DRAGO / POOL

But spats with the Trump administration over issues like land reform, trade tariffs and Venezuela are mounting – and more seem to be waiting in the wings.

Washington says major disagreements between the United States and South Africa on issues such as Venezuela, Zimbabwe, Iran, land reform and trade tariffs will not diminish America’s commitment to helping this country.

US Deputy Secretary of State John Sullivan said, as he ended a trip to South Africa last week, that relations between the two countries were strong enough to overcome these differences.

And indeed it seems that relations will need to be strong as more differences could be looming, on possible increases in US import tariffs on South African vehicles and over Washington’s request to Pretoria to extradite the former Mozambican finance minister Manuel Chang.

Sullivan told journalists that US assistance to South Africa – particularly the huge Pepfar programme which has provided treatment to some 17 million South Africans suffering from AIDS – was the “bedrock” of relations between the two countries.

This assistance would not be affected by differences over foreign policy or other issues.

He reiterated the view of US assistant secretary of state for Africa Tibor Nagy that the US was “disappointed” with South Africa for voting against a recent US-sponsored resolution in the UN Security Council dismissing the re-election of Venezuelan President Nicolás Maduro and calling for fresh elections.

Sullivan said the crisis in Venezuela was a continent-wide humanitarian problem – including a lack of food, water and medicine in the country – that had also spilt over into Brazil, Peru, Argentina, Chile and Guyana with 1.3 million Venezuelan refugees having fled to neighbouring Columbia alone.

He said he had discussed this with South African Director-General of International Relations and Co-operation Kgabo Mahoai in a regular US-SA working group meeting last week and the two sides had agreed to collaborate and discuss the issue further.

Sullivan was asked if Pretoria’s record of mostly voting against the US at the UN, such as on Venezuela, would affect US assistance to South Africa as then US ambassador to the UN Nikki Haley had hinted in 2018.

Sullivan agreed with Haley that South Africa had only voted with the US on 18% of resolutions in the UN General Assembly since 2017 which put it among the lowest 10% of countries at the UN on voting with the US.

But he said his presence in South Africa – on his longest foreign trip to any country so far – was an example of the continuing commitment by the United States to South Africa.

And the US remained committed to continue helping South Africans such as the 17 million AIDS sufferers which it believed had been spared by the Pepfar programme (which has channelled about $6,258-billion into South Africa since 2003).

However, Sullivan also raised some other imminent differences which are likely to further test relations. One is the threat by US President Donald Trump to slap high import tariffs on imports on South African vehicles. Sullivan merely said the two governments would have to deal with this if this happened.

In 2018, the Trump administration imposed increased tariffs of 25% on steel imports and 10% on aluminium imports from most countries, including South Africa. Sullivan said the “glass was half full” on this issue as several US importers of South African steel and aluminium had been granted product-specific exemptions on the increased tariffs even though the US had not granted South Africa a country-wide exemption, as it had for some countries.

Another potential disagreement is over the extradition of Chang. SA authorities arrested him in December 2018 on a US arrest warrant to face a wide range of charges in America for allegedly receiving millions of dollars in bribes in a $2-billion shipbuilding scam in Mozambique.

Both the US and Mozambique have asked Pretoria to extradite him. Though the South African courts are still weighing up these requests, International Relations and Co-operation Minister Lindiwe Sisulu told Daily Maverick in February that her government had already decided to send him to Maputo.

Sullivan was clear, though, that, “The United States hopes and expects that our extradition treaty with the government of South Africa will be implemented and that the former (Mozambique) finance minister will be extradited to the United States.”

Sullivan was also asked why, if the US was so committed to relations with South Africa, Trump had nominated fashion handbag designer Lana Marks, with no diplomatic experience, to be the next US ambassador to South Africa.

He said her strengths were her background in business and in communications and her ancestry, originally coming from South Africa, but mainly her relationship with the president which would enable her to communicate with him and implement his policies.

It was not unusual for non-career diplomats becoming ambassadors to not have diplomatic experience, he added.

Sullivan was also asked if the US intended to match China’s large investments in African infrastructure.

He said he had told both Dirco and Trade and Investment Minister Rob Davies in a telephone interview with him last week that the US was not opposed to Chinese investment in the continent.

“What we’re concerned about is investment, particularly in countries, unlike South Africa, which don’t have the same developed financial system and financial resources: the so-called ‘debt-trap diplomacy’, where through non-transparent loans countries go deeply into debt and then, after they’re unable to repay the loans, the Chinese are able to take advantage of clauses in the agreements to exercise control over assets, ports, etc.”

Sullivan said the US would not invest large state funds directly into African infrastructure as China does, but would do so indirectly through the $60-billion it has budgeted for its Prosper Africa programme which will leverage US private sector investment in infrastructure.

Sullivan was also conciliatory on another issue which blew up between the US and SA in 2018, the ruling ANC’s determination to change the Constitution to allow expropriation of land without compensation if necessary to broaden land ownership.

In 2018 Trump angered Pretoria by tweeting that he has asked his Secretary of State to investigate land seizures and also what he called wide-scale murders of white farmers.

Sullivan said he thought there was some “misinformation” in the US on land reform.

“The issue is very complex, and I don’t think it is translated well across the ocean and being covered with the depth and the perspective that’s necessary.”

On farm murders, he said the crime rate generally in South Africa was “tragically high” both in urban and rural areas and on farms, and both white farmers and black farmworkers had been killed.

“My perception is that it is a major function of the crime rate here in South Africa, which I know the South African government – and it’s come up in discussions in the three days I’ve been here – is working hard to address.”

Sullivan said that since his goal was to promote stronger commercial relations and more direct investment by US companies in SA, he would like to see the complex issue of land reform addressed transparently.

“So that both the agriculture sector in this country, which is substantial and a real source of power and pride, and the economy generally, isn’t significantly adversely affected by a non-transparent process that reduces investor confidence…”

Sullivan said he and the South African government had also discussed their differences over Zimbabwe. Pretoria has recently stepped up its demands for the US to lift its sanctions against President Emmerson Mnangagwa’s government which it says are hobbling the country’s economic recovery after the Mugabe years.

Sullivan said he had insisted again that US sanctions were not hurting the Zimbabwean economy as a whole as; unlike America’s sanctions against Iran and Russia, for example, they mostly targeted individuals who had engaged in corruption and human rights violations, or their companies.

However, he added that there was also a statute passed by the US Congress (the Zimbabwe Democracy and Economic Recovery Act) which limited the ability of the US government to vote for loans from international financial institutions to Zimbabwe, in the absence of new elections and respect for human rights.

The executive branch of government could not change that restriction as it would require Congress to change the law, he said.

“We’re very enthusiastic and pleased by the new government, its pledges, the promises that it has made. We want to see more action taken to implement those promises for reform. We think that the recent instances of violence have been a step back; we want to encourage progress.” DM