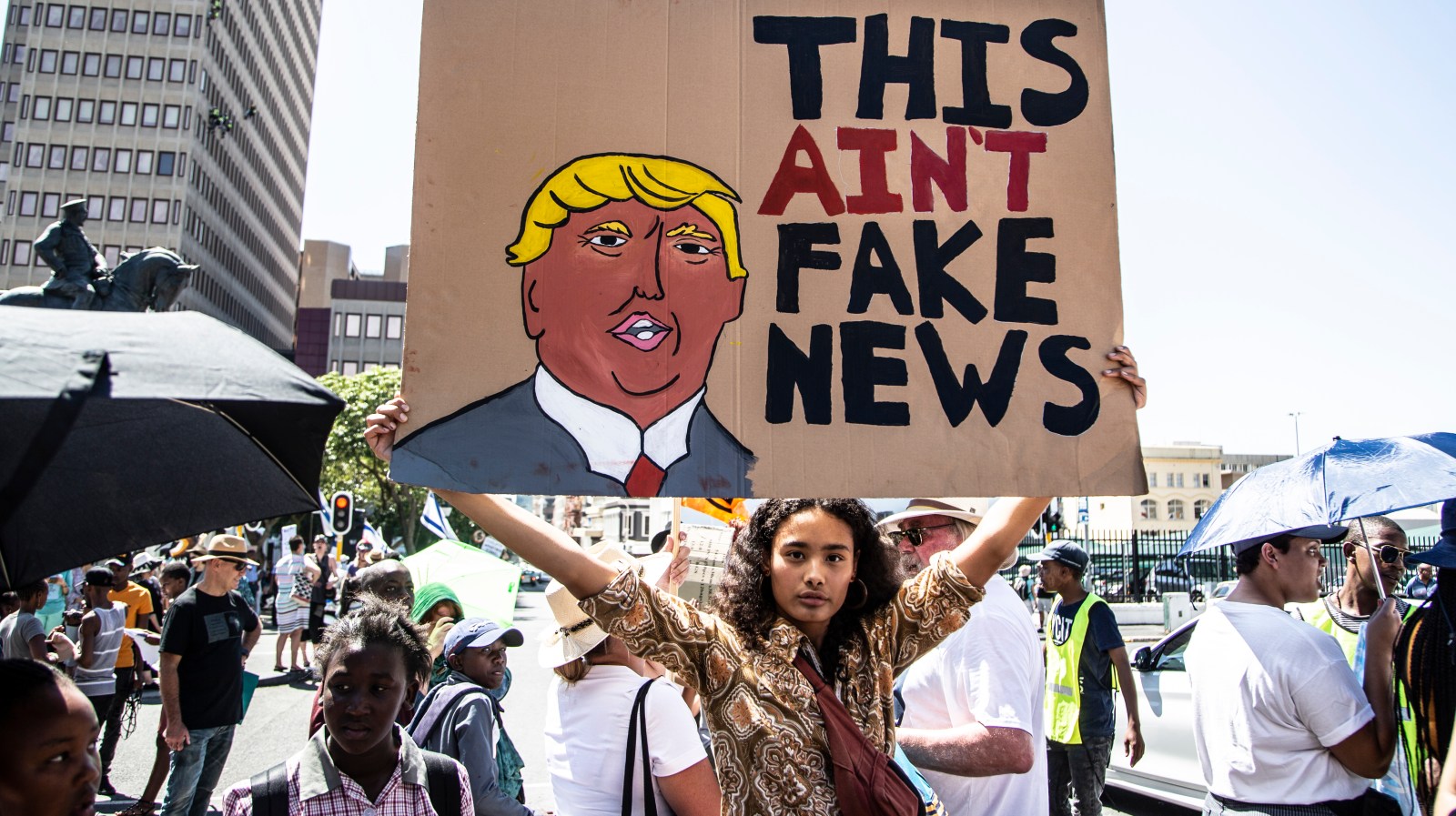 Geenah, a Grade 12 student, holds a sign that says ‘This ain't fake news’ outside of Parliament in Cape Town on March 15 during a protest to raise awareness about climate change. Photo: Tessa Knight

Inspired by 16-year-old Swedish environmental activist Greta Thunberg, young people took part in 110 protests around the world on Friday to raise their voice against rising global temperatures and a lack of decisive government action to prevent climate change.

“Stop denying the world is dying.”

This was the mantra repeated by hundreds of schoolchildren who protested against climate change outside the gates of Parliament on 15 March. Armed with posters and dressed a mixture of official school uniforms and colourful clothing, the group stopped traffic in an attempt to raise awareness about the lack of cohesive global environmental policies.

The blisteringly hot day, which arrived after a week of moderate temperatures, only seemed to highlight the crisis of global warming. Despite the heat, learners from more than 20 schools in the Western Cape took to the streets to demand politicians and government leaders take an active stance to prevent further global warming.

Sampson was inspired by 16-year-old Swedish environmental activist Greta Thunberg. The high school student sparked debates over climate change in 2018 when she started the #FridaysForFuture campaign after spending every Friday protesting against climate change outside her local government offices. Thunberg was recently nominated for this year’s Nobel Peace Prize for her environmental activism.

“Adults keep saying we owe it to the young people, to give them hope. I don’t want you to be hopeful. I want you to panic,” she told world leaders at the World Economic Forum Annual Meeting held in Davos at the beginning of 2019.

And according to the World Meteorological Organisation (WMO), we should be panicking. The past four years have been the hottest on record to date, with each year consistently hotter than the last. If current fossil fuel trends continue and greenhouse gas concentrations increase, by the end of the century global temperatures may increase by 3-5°C, says the WMO.

In an attempt to hold governments accountable for rising temperatures, schoolchildren like Thunberg and Sampson protested outside government offices, parliaments and city halls in more than 110 countries around the world. United by social media, their message was clear: Those in power have to take action against climate change now.

But the 17-year-old wants people to know that everyday citizens are not the root cause of climate change.

“One hundred companies produce 71% of the world’s greenhouse gases. Just 100. So going vegan and recycling is important, but what we need to do is hold governments and companies accountable,” said Sampson.

Sampson and most of the children who attended Friday’s protest are too young to vote in the upcoming elections, but they are frustrated that the environment is not a key concern for political parties.

“We thought after the drought and the water crisis and all the fires, South Africans would understand. But they didn’t, and politicians did nothing, and now we’re here,” said Babalwe, a Grade 9 learner and protester at the #FridaysForFuture protest.

Despite battling raging fires and drought, Sampson says that many political parties have made few commitments to actually preventing climate change. In fact, looking at the manifestos recently released by most political parties, it would appear that South African politicians are committed to growing the mining sector, an industry that contributes significantly to the country’s total greenhouse gas emissions.

Many protesting students on Friday carried placards and posters with slogans and facts, such as “coal isn’t cool”, “factory farming causes climate chaos” and “solutions not pollution”.

The group plans to hand over a list of demands to politicians in the near future. The demands include making climate change a priority for the 2019 elections, a moratorium on new coal, oil and gas mining licences, 100% renewable energy in the electricity sector by 2030 and a Green New Deal for South Africa. DM