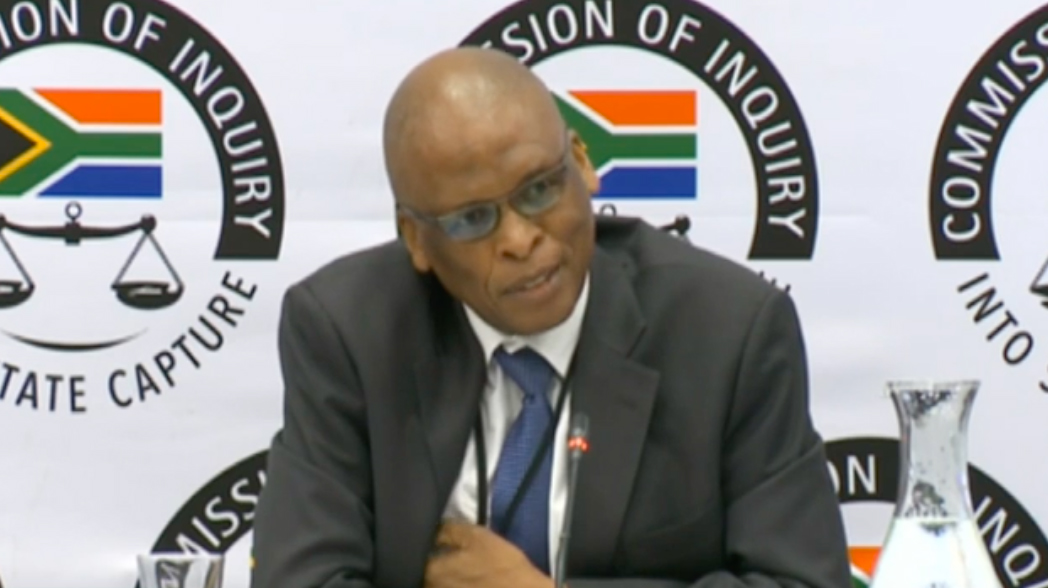 At the height of the Optimum Coal Mine heist, a Gupta-linked ministerial adviser under Mosebenzi Zwane, took it upon himself to get rid of DG, Dr Thibedi Ramontja.

Malcolm Mabaso, a Gupta crony who featured in the #Guptaleaks, called the Director General of the Department of Mineral Resources, Thibedi Ramontja into his office where he worked as “adviser” to Mosebenzi Zwane and straight up told him: “The minister says you must resign. He wants the resignation within 20 minutes.”

Former DMR DG, Dr Thibedi Ramontja, testifying at the State Capture Commission on Thursday morning, said Zwane was sitting in his office about five metres away at the time.

A highly qualified engineer with expertise in geosciences and a PhD in mineral economics, Ramontja testified how he had been called to a meeting with Zwane on December 10 2015.

Upon arrival, he was instead lead into the office of Zwane’s adviser, Mabaso, who then told him that he had to resign.

Mabaso told him that Zwane wanted a resignation within 20 minutes and when Ramontja asked where the minster was, he says he was told Zwane was in his office.

Shocked, Ramontja returned to his office to draft the letter, leaving after a month’s notice.

But, Ramontja conceded he was not all that surprised that his relationship with Zwane had never quite taken off since Zwane arrived at the department a few months earlier.

“From day one they were running the show,” he testified.

He said he had met the advisers on the first day, when Zwane was sworn in at the Union Buildings.

“A minister and DG have to be close, but that time I had to work through the advisers.”

He said he felt immediately marginalised and that the trio of advisers were now talking to staff in the department directly.

Apart from the fact that ministerial advisers have no place running a government department, Ramontja said they became a barrier between him and Zwane.

And, as part of the advisers’ system of running the show, Ramontja said, he discovered that they would now dispatch the chief director of mines to go out and carry out inspections at mines.

The Commission earlier heard testimony of how the DMR, during Zwane’s tenure, had added extra pressure on Glencore, the owner of Optimum Coal Mine, by slapping the company with several Section 54 notices, usually reserved for extremely serious safety breaches as they effectively shut down mining operations.

Ramontja said while serving notice, Zwane had offered him a job at South Africa Diamond and Precious Metals Regulator.

Ramontja then testified to various strange goings on at the DMR at that time, including the centralisation of the “Optimum project” now located in in Zwane’s office.

Project Optimum, he said, could only have entailed the potential crisis involving Optimum Coal’s decision to file for business rescue after the company was squeezed for R2.1-billion in historical penalties by Eskom – thereby threatening jobs and security of coal supply as the mine at the time served the parastatal’s Hendrina power station exclusively.

It had been handled by various officials during the tenure of Zwane’s predecessor, Ngoako Ramatlhodi.

“I was in the dark about what was happening in that project. The DDG would come and almost whisper snippets to me,” he said.

A few days before Mabaso instructed him to resign, Ramontja said he received a letter, signed by Eskom’s then head of generation, Matshela Koko.

Dated 6 December 2015, the missive painted an extremely dire picture of the situation around Optimum Coal and the potential impact on Eskom.

But, the letter withheld key information that included a decision by Glencore, communicated to Eskom during a formal meeting at Megawatt Park five days earlier on 1 December 2015– that Glencore, the primary shareholder in Optimum Coal Holdings, the holding company of Optimum Coal Mine, had decided to take the mine out of business rescue. On the same day, Zwane was already in Switzerland, meeting with Glencore CEO, Ivan Glasenberg to discuss the sale of Optimum to the Guptas.

In Johannesburg, Glencore’s representative, Clinton Ephron, had told Koko and his colleagues it would now continue to fund the loss-making operation and take a knock by taking on R113-million in monthly losses and allow the company to continue supplying Eskom for the two-year remainder of its contract.

The letter from Koko though made no mention of this, only that Eskom faced a serious coal supply crisis as a result of the business rescue proceedings (by now abandoned save for regulatory formalities).

It effectively painted a dire picture to Ramontja, that three of Eskom’s power stations, Hendrina, Arnot and Komati, were at risk as a result.

Koko, writing to Dr Ramontja said: “As you may be aware, Eskom has been involved in a legal wrangle with the above supplier (Optimum).”

He referred to threats of liquidation with potential negative consequences for electricity supply. Those threats no longer existed as, however oppressive the conditions, the mine was no longer for sale and that it would honour the contract and had told Eskom this on 1 December.

Yet, Koko wrote: “In a rather dramatic fashion the company was placed in business rescue.”

A day or so later, Ramontja found a draft response to Koko’s letter in his in-tray.

He does not know who had written it but there, the DMR was now telling Eskom the following:

Asked why on earth he would be asked to sign a letter specifying all these various commitments by the DMR even though Koko had not asked for them, Ramontja said this was because people had been discussing the Optimum deal and he did not realise it was being used for ulterior purposes.

What Ramontja did not know at this point, was that some executives at Eskom and senior officials within the DMR, including Zwane, had actively worked to help push Optimum Mine into business rescue and to facilitate a sale thereof to the Guptas’ Tegeta Exploration.

The magic bullet in the draft response signed by Ramontja – again without such a request featuring in Koko’s letter – was for Eskom to put up a R600-million prepayment for coal to the “new owners” to help them honour the remainder of the coal supply deal with the parastatal. Although the department at times did resort to unconventional methods to save jobs, it had no business doing this, Ramontja said.

The cash, paid by Eskom a few months later, was never used for operational requirements as the response letter purported – it went straight towards the Gupta purchase of Optimum, helping them to cover a shortfall on the purchase price in the exact amount.

Ramontja told the Commission that the bizarre letter he was asked to sign, later vanished from his desk. He had signed it but not dated it as he had hoped to first clarify the details therein.

And, he did not see it it as a directive to Eskom – the parastatal was not accountable to the DMR, it fell under the Department of Public Enterprises.

The Commission continues on Thursday afternoon with testimony by former finance minister, Nhlanhla Nene; this time, responding to a range of allegations about his tenure as the former deputy minister of finance and chairman of the Public Investment Corporation – the government pension fund manager that allegedly funded businesses associated to his son. DM