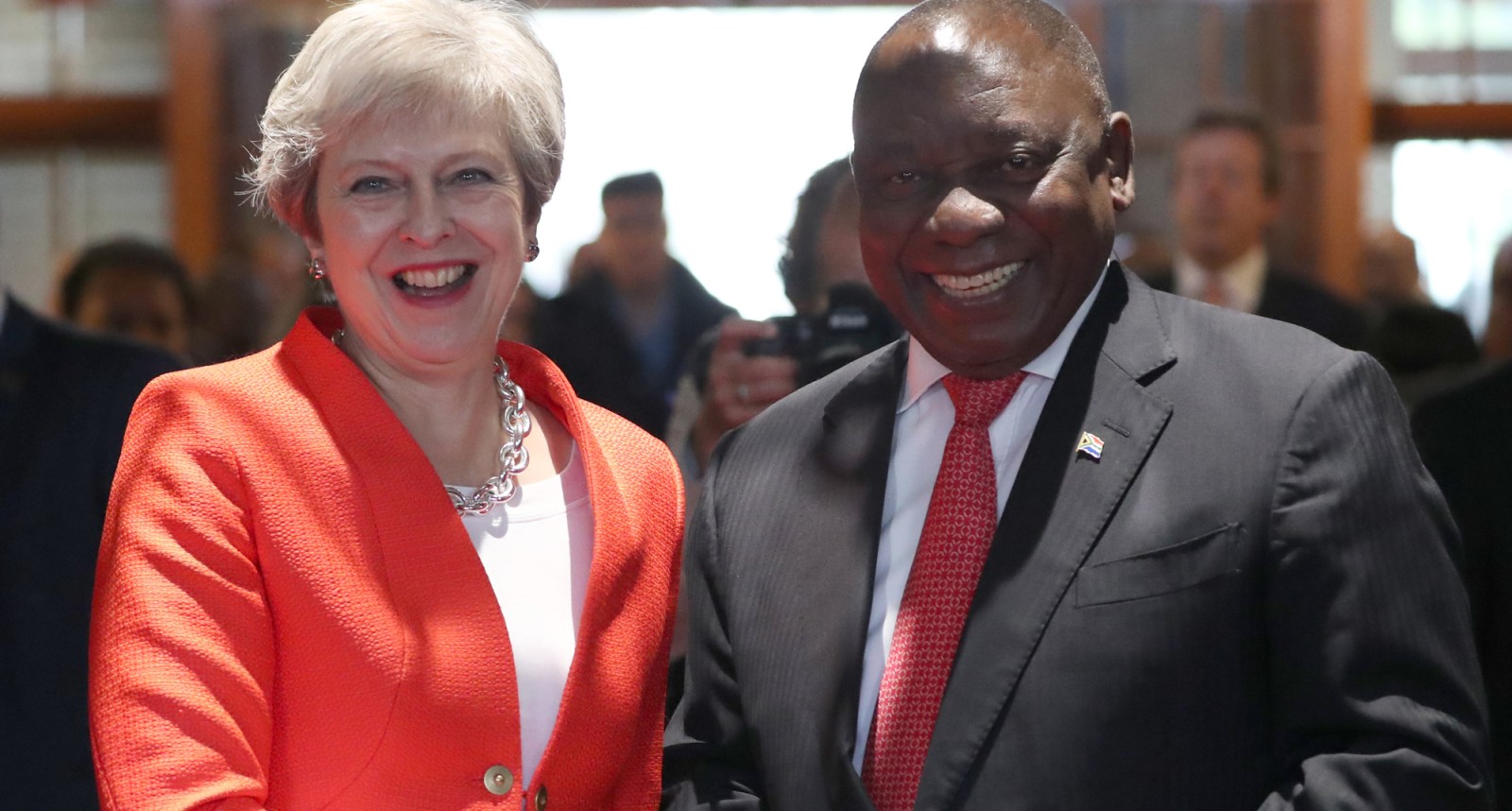 British Prime MinisterTheresa May (C) is greeted by South African President, Cyril Ramaphosa (R), in Cape Town, South Africa, 28 August 2018. The visit is the first visit by a British Prime Minister to Sub-Saharan Africa since 2013. She is visiting South Africa, Nigeria and Kenya meeting with business leaders and her counterparts in government with a central message of renewed partnership between Britain and Africa. EPA-EFE/MIKE HUTCHINGS / POOL

Trade and Industry Minister Rob Davies and his regional counterparts in southern Africa hope to nail down a separate free trade deal with the UK on Friday as Theresa May tries to prevent Britain crashing out of the EU.

The South African government is scrambling to nail down a free trade deal with the UK before Brexit.

As the 29 March Brexit deadline looms, Pretoria is trying to prevent a disruption of South Africa’s lucrative trade with the UK when it leaves the European Union.

It is closely watching British Prime Minister Theresa May’s efforts to steer a last-ditch Brexit deal through the House of Commons this week to avoid the UK crashing out with no deal on 29 March.

Trade and Industry Minister Rob Davies and his counterparts from the region are hoping to hold a telephone conference with UK secretary of state Liam Fox or his trade deputy on Friday to try to finalise a post-Brexit trade deal with the UK.

However, the conference has not yet been finalised.

If they fail to reach an agreement before Brexit, some exports to the UK will incur higher import tariffs. Sales of cars are likely to be the biggest casualties, Davies told journalists on Wednesday in Cape Town.

He said the talks would have to wait until Friday so that South Africa could first get a clearer picture of Britain’s relationship to the EU. British Prime Minister Theresa May faces two crucial Brexit votes in Parliament before Friday. On Tuesday Parliament rejected her revised plan for an orderly withdrawal from the EU. On Wednesday night Parliament was due to vote on whether or not the UK should withdraw from the EU with no deal – the so-called “hard Brexit” option.

If Parliament decides against a hard Brexit, it will vote on Thursday on whether or not to postpone its departure from the EU beyond the 29 March deadline, to allow time for more negotiations.

Davies said if he and the other trade ministers from the Southern African Customs Union (SACU) and Mozambique secured a deal with the UK government on Friday, he would submit legislation to Parliament next week to ratify the new free trade agreement with the UK.

South Africa’s trade with the UK is now governed by the SADC-EU Economic Partnership Agreement (EPA) between the EU and five SACU member states – South Africa, Botswana, Lesotho, Namibia and Eswatini – and Mozambique.

The EPA will no longer apply to the UK when it leaves the EU. So the SACU-plus-Mozambique group have been trying for nearly two years to negotiate a separate free trade deal with the UK. Davies explained that the basic aim was to roll over as much as possible of the SADC-EU EPA into the UK deal.

But it was not possible to do this completely. For example, he said, South Africa did not have duty-free and quota-free access to the EU market for all of its exports. SA agricultural products especially incur duties and quotas because some EU member states also make those products.

Davies said that SA and its neighbours had persuaded the UK to include many of those products into the duty-free, quota-free list for the UK trade deal. He noted especially that wine exporters would benefit from a separate trade deal with the UK. He said that SA had been able to increase its quota of duty-free wine exports to the EU from 110 million litres to 150 million litres a year under the EPA.

About 40% of SA’s wine exports to the EU go to the UK. So SA had now also managed to secure a wine export quota to the UK equivalent to about 40% of the 150 million litres total EU quota. At the same time, he seemed confident that SA would persuade the EU to maintain the total 150 million litre wine quota, after the UK left the EU.

But Davies said that the southern African group had not yet reached an agreement with the UK on a few other issues. The main one concerned “cumulation” in the “rules of origin”. What this meant basically was that the EPA deal allowed countries to incorporate components from EU countries, including the UK and the SACU/Mozambique countries into products which could still enjoy duty-free access into each others markets.

Davies said the UK wants us to recognise full cumulation of anything they had from the EU, “which we could concede for a period of time but not in perpetuity.

“And under the EPA we don’t get cumulation in reverse,” he noted.

So the southern African sides wanted full cumulation too, for example in canned fruit exports. At the moment, for example, eSwatini could not can SA peaches and export them duty-free to the EU. It has had to can Greek peaches because SA peaches don’t qualify for duty-free access to the EU.

The two sides have not quite worked out mutual concessions on cumulation.

They have also not quite reached agreement on how to manage so-called Sanitary and Phyto-sanitary (SPS) rules – the measures used by countries to prevent agricultural imports bringing in plant and animal diseases.

The UK has agreed to accept the SPS certificates which southern African agricultural product exporters have already received from the EU.

But there are still some differences between the two sides on how long these certificates will remain valid.

Davies seemed upbeat about new regulations which the UK issued on Wednesday, setting out the import tariffs which the UK would impose on all imports if it crashed out of the EU without a deal.

Davies noted that most of the products which the SACU-Mozambique countries exported to the UK would be able to enter that country duty-free. These included oranges, grapes and wine.

But some other products, including a few important to the SACU-Mozambique group, would incur tariffs. These included finished automobiles, beef, pork, lamb, poultry and sugar.

Davies said the tariffs on imported finished cars would rise to 10% which could kill SA exports of autos to the UK. The Ford Ranger is cited by officials as one of the major SA auto exports to the UK. Davies said the duties on beef could impact on Botswana and those on sugar could hurt eSwatini.

Davies nonetheless welcomed the no Brexit deal tariff schedule which London published on Wednesday as a “backstop” or “fallback” position which would ensure that South African and regional exporters did not suffer too badly if the SACU-Mozambique group could not secure a free trade deal with the UK before it left the EU.

“This is a very fast moving target with a very high level of uncertainty. And what we are trying to do as SA government but also as the SACU plus Mozambique group is we’re trying to ensure, at least as far as possible, at least on the trade front, we don’t have an interruption.”

Davies said that apart from the trade it was impossible to calculate what the wider implications would be on the South African economy of the impact of Brexit on financial markets and the wider global economy. SA and its neighbours had no ability to influence those consequences. DM