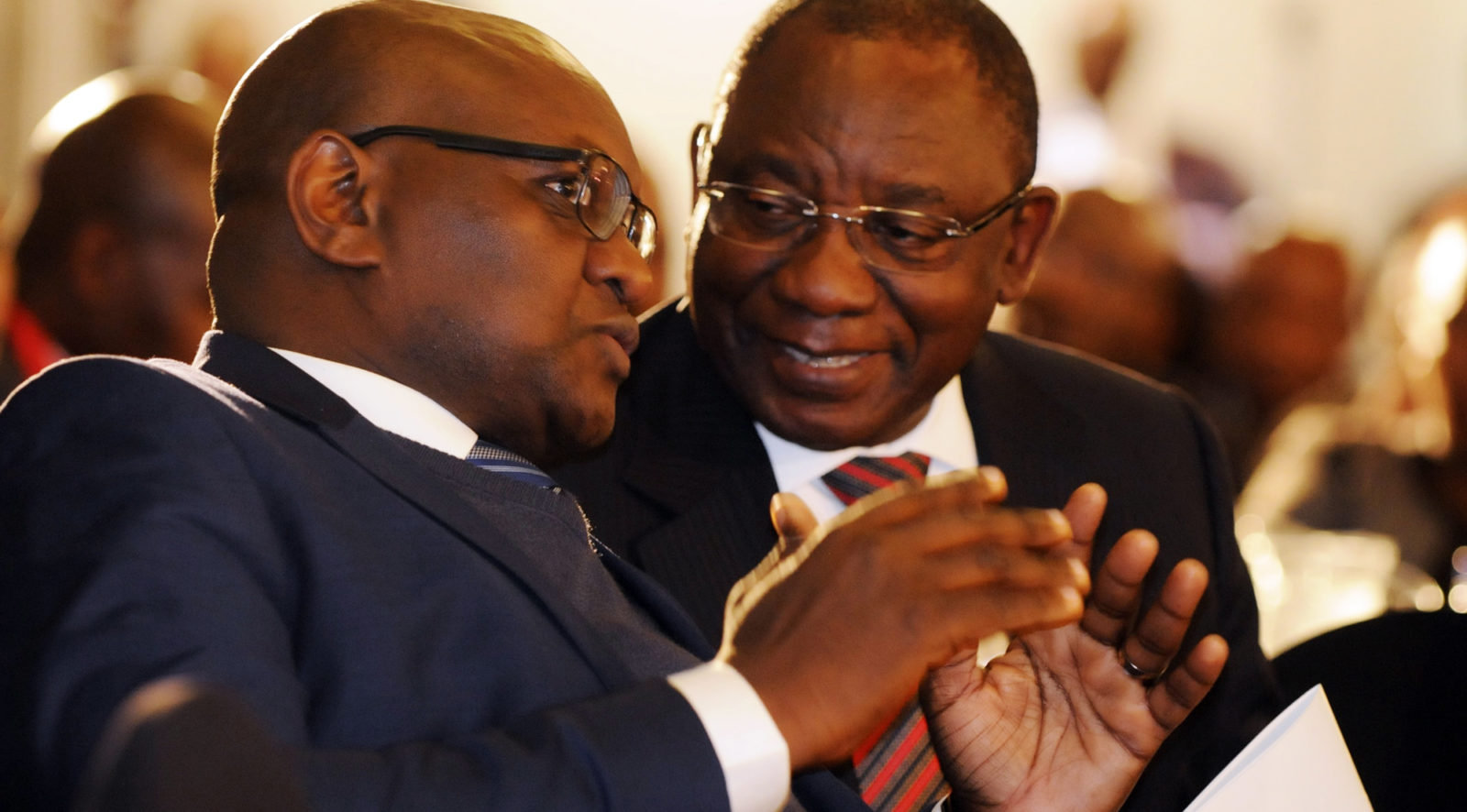 Deputy President Cyril Ramaphosa has a word with the Gauteng Premier; David Makhura during the Gauteng Economic Indaba on June 08, 2016 in Johannesburg, South Africa. Speaking at the Indaba Ramaphosa said the decision by Fitch Ratings to hold the country’s sovereign credit ratings above junk status should spur South Africans into working harder to improve the economic outlook. (Photo by Gallo Images / Sowetan / Peter Mogaki)

A recent poll and a series of events in the ANC have suggested that the possibility of the party not being able to win more than 50% of the vote in Gauteng is closer to becoming a reality than ever before. Which, of course, opens the door to what can be a series of endless speculation around the future ruling coalitions for South Africa’s richest province.

Last week the Institute for Race Relations’ poll (which it stressed is not a prediction but a snapshot of the electorate) showed that the ANC was under 42% in Gauteng. This means that there is an incredible amount of ground to make up for the party if it wants to stay in government there.

Whatever the final result, it is important to determine, before the actual casting of ballots, what some of the dynamics around those choices might be. There appears to be a general presumption that the ANC would immediately call on the EFF to join them in forming a provincial government, which may not necessarily be the case. And if it were that really strange choices are made, there could be a range of longer-term consequences for all involved.

For some voters, the one key element that may change in the ANC is the composition of its list of people who will represent it in the National Assembly. While obviously, the votes for Gauteng and the national Parliament are on separate ballots, most people vote for the same party twice. On Friday there were two reports that suggested that those implicated in wrongdoing, but not convicted, would remain on the ANC’s list. Which means people like Nomvula Mokonyane and Bathabile Dlamini could well represent the ANC again, despite being perceived by the public as badly corrupt.

Whenever any combinations are considered, it is often assumed that the ANC’s first port of call for partners would be the EFF. The EFF comes from the ANC, Julius Malema appears to have close relationships with some people in his old party, and there has been general speculation that he may wish to return to Luthuli House, now that Jacob Zuma is no longer President. There can also be a claim that because they all started in the same political home, the EFF and the ANC have the same interests and aims.

But, in fact, their interests and aims are remarkably different. Malema has made a point of attacking the ANC, often in very personal terms. His manifesto prioritises land expropriation. The ANC’s deliberately makes a point of not promising a land-grab for the elections. And then there is what appears to be the public distrust between the two leaders. In short, it would be dangerous to trust Malema in any way; he has shown that he can change his allegiance and his views on issues very quickly.

A short list of examples: The EFF opposed the party funding bill but then criticised Ramaphosa for not signing it into law, Malema claims to oppose corruption but took money from a self-confessed cigarette smuggler, he once claimed to be willing to “kill for Zuma” and then became one of his strongest opponents and now is seen as helping Zuma and his henchmen. Also, the recent display of violent sexism by the EFF towards Karima Brown may simply be too much for Ramaphosa to bear.

In a real, policy- and delivery-based world, it may actually be much more in the ANC’s longer-term interest to go into a coalition with the DA.

Imagine the situation. Ramaphosa makes public his appeal to Mmusi Maimane for the DA to join the ANC in a coalition in Gauteng. He explains that he believes the ANC and the DA’s ideologies are not that far apart, and that as “decent people” Maimane and Makhura can do much good together. And, he may say, it is important to keep “fascists like the EFF out of government”.

There could be a powerful resonance here with some recent events in Europe. There, the emergence and rise of what’s described as the “far-right” have led to much soul-searching among more established centrist parties about how to keep them out of power. In some cases, it appeared that parties that would normally oppose each other, worked together against these extremist forces. It didn’t always work, and in some cases strengthened the claim to some voters that the establishment was working against those who wanted radical change. But Ramaphosa may well suggest to Maimane that Malema’s extremism is a national threat and they must band together to neutralise him.

Such a proposal would put Maimane in a difficult position. If he ignores the request, he would be held responsible for giving Malema greater political power. If he goes into a coalition he runs a huge risk of losing identity. A recent history of coalitions can show that the junior partner can be hugely weakened. They can be held responsible for the failures of government, and get rewarded for none of the successes. In Britain, the Liberal Democrats held the balance of power, went into government with the Conservatives and were harshly punished by voters as a result. Ramaphosa could try to do the same thing to Maimane and the DA. He would also know that Maimane would probably pay a high political price, were he to make certain promises and not live up to them. Interestingly, Malema appears to have more room to ignore his own promises than Maimane.

However, Ramaphosa may also feel that the real battle is not just for votes, but a particular section of voters. There is now some evidence that the real battle is for people who used to vote for the ANC but no longer do. And it seems the EFF is winning those votes. This may mean the ANC could feel in the longer term that this is the real threat. One way to neutralise that might be to try to incorporate, less than lovingly, the EFF into a coalition. Just the conversation within the EFF about whether or not to join the ANC could be destabilising.

At the same time, it is important to remember that for both the DA and the EFF the decision of whether to join the ANC could be difficult. In both parties, there could be arguments for and against joining such a coalition. If the EFF does grow in this election, it is possible that it will start to experience the problems other parties have had as they grow past a certain stage. In other words, it is relatively easy to manage a party with less than 7% of the vote if it is cast in the character of one particular personality. That may actually be more difficult if it grows.

To grow, a party usually has to moderate to attract new voters. This may be difficult for the EFF to do, and mistakes could be made along the way. And for the EFF, joining a coalition with the ANC may well make some of its members or leaders vulnerable to approaches from the ANC. In other words, there may be deliberate political action on the part of the ANC to try to split the EFF.

However, it must be said that for now, the most likely outcome in Gauteng could still be that the ANC is able to increase its share of the vote to around 47% (from the currently polled 42%). This allows it then to join up with some of the smaller parties (the UDM, AIC and others). But that also means that those smaller parties could be able to hold the ANC to ransom at all times. And such a move may well lead to the political possibility of the slightly absurd situation of the UDM being in a coalition with the ANC in Gauteng and with the DA in Tshwane, or Nelson Mandela Bay… (although this is not uniquely absurd, as the EFF voted against Athol Trollip in NMB, but supported Herman Mashaba in Joburg.)

In the middle of all of this are the tactics that could be employed. Will Malema really keep to his promise to only work with a party that promises to expropriate land (which the ANC has not explicitly done), will other parties say they will work with him but only through a formal coalition agreement, so limiting the freedom that he has used so effectively in Joburg and Tshwane.

Much will now rest on the ANC’s campaign in Gauteng, and possibly, the behaviour of those who do not support Ramaphosa. Seven weeks more. DM