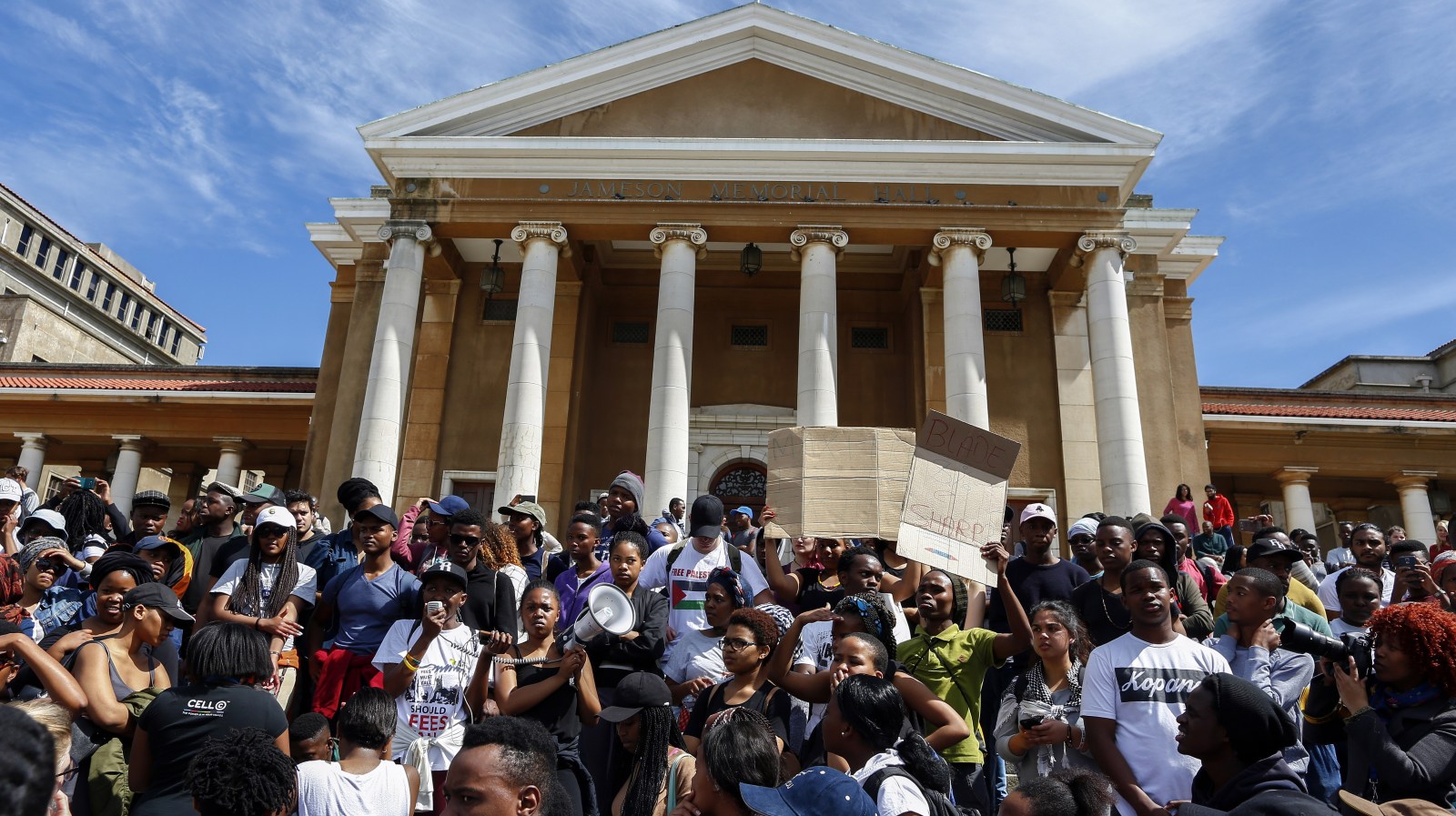 Habib’s book is an important chronicle of the #FeesMustFall protests at Wits while also providing a view of the national context that shaped local conflicts. I commend the book and agree with much of his analysis. But I want to reinforce the point Adam makes both in the extract and elsewhere in the book, that different campuses faced different issues and different political and protest dynamics, which in turn required different approaches to managing the conflicts as well as to the underlying issues.

The extract highlights that Adam and I discussed our respective strategies for managing the protests with each other, sometimes daily. By and large, we agreed, not necessarily on the same strategy, but on why each of us was pursuing a strategy best suited to our circumstances. So even though the UCT strategy was, as Adam states, to go “out of their way to avoid a security response, closed their academic programmes early, and even postponed some of their teaching and examinations to the new year” and differed from the Wits strategy, I do not join Adam’s critics in arguing that the Wits executive should not have brought in the security when they did.

The point is, our strategies were different for good reasons and suited to our circumstances, and I do not think, with hindsight, that we at UCT would or should have done anything differently. It seems clear from Adam’s book that he thinks the same about the Wits strategy. So, I disagree with the attempt to analyse whether one strategy was better than the other as if they could have been substituted for each other on the different campuses.

I am currently in the process of writing a book offering my analysis of the UCT experience and I will use that opportunity to say much more about why we adopted the strategies we did, and what I think we might have done differently. But since that will take some time to appear, I need, in the meantime, to challenge some of Adam’s analysis of the UCT events.

The first speculative statement I need to challenge is the statement that the UCT Executive was less united and cohesive than its Wits counterpart. This would be a trite point to make or dispute, except that Adam suggests this as a reason for not taking a more security and policing oriented intervention. This is simply untrue.

I would first challenge the logic of his point. A continuum of views, where it does exist, is generally a good thing, encouraging a thorough exploration of strategic alternatives – not a weakness that prevents decisive action.

Second, while there were a few voices in the UCT Executive that urged earlier and heavier security intervention, the overwhelming majority was certainly aligned with the strategy we adopted, which reflected, to quote Adam, that “our differential institutional responses were also partly determined by our own comfort and willingness to initiate security measures” .

The second claim I am concerned about is that UCT did not complete the academic year in 2016 whereas Wits did and that this was related to our divergent strategies on the use of security.

I disagree with his assessment that UCT did not complete the academic year. However, I don’t want to suggest that the academic programme was not severely disrupted and even compromised in late 2016 – it was, as was the case on most campuses in the country, including Wits.

My criticism of Adam’s statement in the extract is that there is an unfounded assumption that bringing in more security at UCT would have avoided this disruption to the academic programme. That may have been the calculus at Wits but that should not be extrapolated elsewhere.

At UCT we weighed up the costs and benefits of the options and concluded that we were likely eventually to get to a negotiated agreement, and that this was better than the alternative. That alternative at UCT would have required heavily armed security at every exam hall, residence and library. Even that would not have countered the high risk of protesters who were legitimate exam writers getting into exam halls and creating disruptions.

Without resolving the conflict there was also the likelihood of noisy clashes with security disrupting exams in progress and disturbing students trying to study. This would in any case only temporarily defer the conflicts which would then spill over into the next year. Thus the overwhelming majority of students who were not supporting the shutdown would, in our view, be worse off if exams were conducted under such conditions.

In the end, while many other universities had to run exams with highly visible private security patrolling the campuses, doing body and bag searches of students entering exam venues, or busing them to sites away from the campus – all of which would be extremely anxiety-provoking for examinees, UCT was able to run the November 2016 exams with almost no visible security and no disturbances, as a result of the agreement signed with protest leaders the day before exams started.

There were a few exceptions of selected courses where practical lab sessions could not be offered during October 2016, and these were made up in the first three weeks of January 2017 or incorporated into the subsequent year’s teaching.

The third assertion which I want to challenge was the view that UCT faced protests at the end of 2017 which Wits did not, and that this was because UCT had adopted the negotiation strategy in 2016 in contrast to Wits’ show of force. In fact, Adam argues that UCT had to embark on just those security measures it had eschewed in 2016 and by implication would not have had to if we had pursued heavier security tactics a year before.

There is no logic to this speculation nor to the historical counterfactual. The protests at the end of 2017 which happened at UCT but not at Wits, like the earlier protests, had their own campus-specific dynamics – in this case specific SRC election politics and the fact that only at UCT were students still in classes and therefore on campus in late October when Minister Nzimande’s new fee proposals and the Heher Commission report were released. There is no reason to think these protests would have been avoided had we attempted to control matters in 2016 with more security or had we not persisted to negotiate an agreement. In fact, on the contrary, I think the 2017 year would have been far more disrupted. In a similar vein, I do not think that protests in 2018 and 2019 at Wits and other universities can be blamed on how protests on those campuses were managed in the past.

Habib’s book will be a resource for future researchers and analysts. I believe that it is important that the archive, therefore, include these contrary perspectives. DM

Max Price was the Vice-Chancellor of the University of Cape Town from 2008 to 2018.