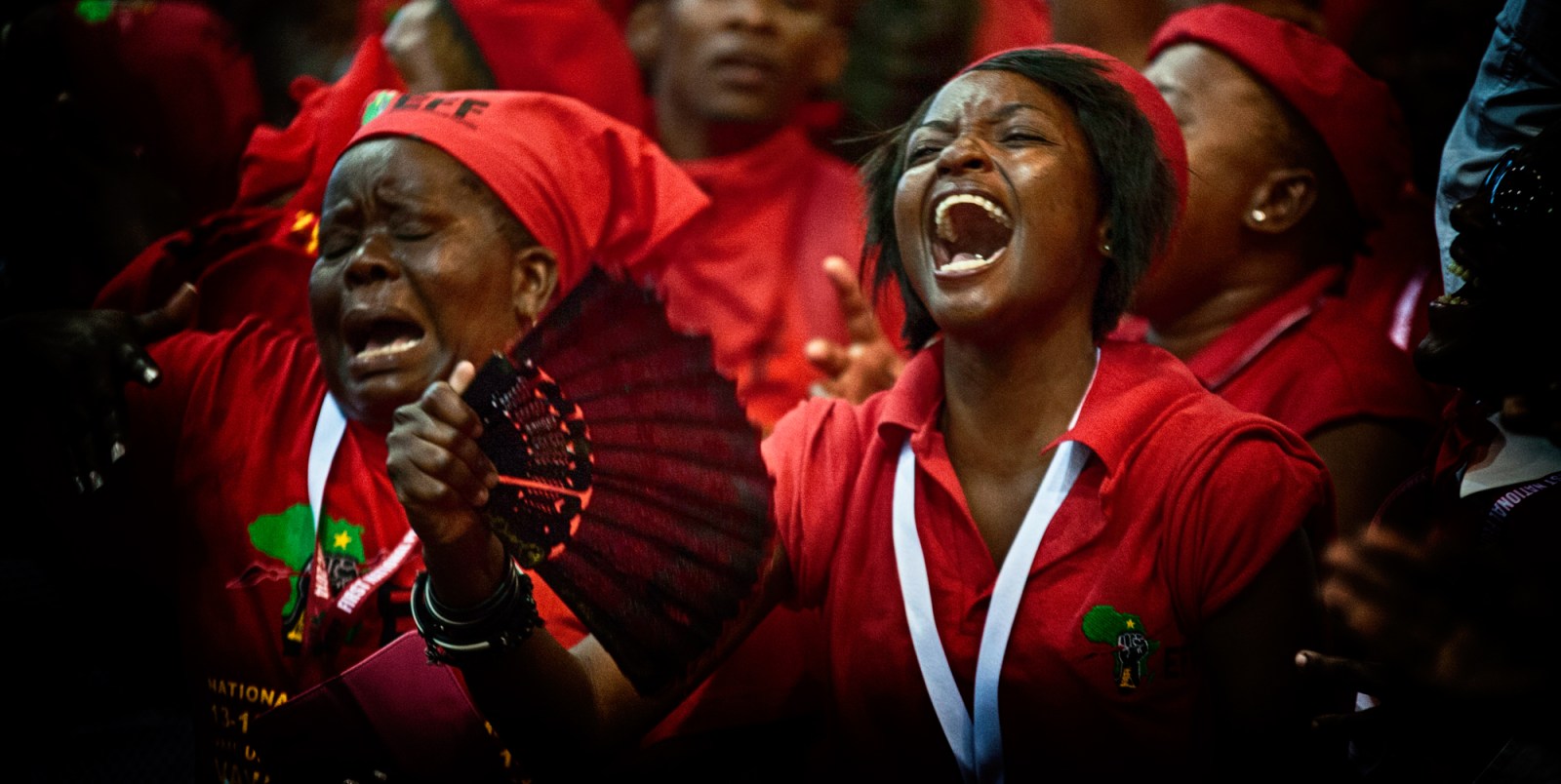 Photo of the EFF congress by Greg Nicolson

Rebecca Davis can’t find us because she is not where we are. We are among the gogos who her pal Karima Brown ordered to be monitored by her special ops team. Will we find Davis fighting for the dignity and freedom of association of the gogos? It’s fine if we don’t, because we will, Madame Davis.

This Right of Reply is in response to Rebecca Davis’ article, An Open Letter to the women of the EFF

I contemplated writing this response piece. Was it worth responding to a white woman who could not even be bothered to refer to us (the women of the EFF) by name? Who rendered us as nameless and invisibilised our work in an article that was supposedly addressed to us?

Rebecca Davis, who did not fail to mention numerous names of EFF men, while simply referring to us as “you” and “female fighters”. Davis falls into a long history of white feminists reinforcing racist and patriarchal structures and attitudes in relation to black women (and African women in particular).

Her action of attempting to insert her white feminist superiority complex has garnered response articles by black women thinkers such as Deshnee Subramany and Vashna Jagarnath. I highlight these responses to Davis to demonstrate her historic pattern of placing black and Muslim women subjectively at the margins, while centring her self-righteous self.

In her open letter to women in the EFF, Davis questions where women in the EFF are. First, how is it possible to locate our political actions/inactions when we are nameless bodies, and she refuses to see and acknowledge our voice and political work?

Before I point Davis to the multiple locations of our activism, let me speak to the threats against Karima Brown. It seems that the piece by Davis was largely motivated by rape threats by supposed EFF members to Brown (a so-called journalist who has made her party allegiance to the ANC very clear).

We, as the EFF, and the women in particular, were the first to speak out against such vile patriarchal threats against Brown. Furthermore, we wanted to act and hold the individual/s accountable, as we do whether it is Brown or an unknown teenager in Ingwavuma.

We requested details of this supposed EFF member. We repeatedly requested a screenshot with the cellphone number of the person/s who made the threats, to no avail. How can the supposed member/s be held accountable when Brown with her “Special Ops Team” refuse to share such information with us? Why is it difficult for Brown to share the cellphone number of her harasser/s?

The EFF is the leading party in gender representation within its leadership structures in the country, as reported by Gender Links, due to our work. One of our young activists, Naledi Chirwa, rightfully pointed out on Twitter last week that “not so long ago an EFF motion to provide free sanitary towels passed in Johannesburg and a while back in the Free State as well, [this was possible] BECAUSE OF EFF WOMEN. Today you are asking about our whereabouts? Erase us, white feminists. #EFFWomen”.

She continued to highlight that “journalists were hailing an AfriForum white boy for disrupting a protest calling for the insourcing of black women a few days ago. Today they are here asking us where are the EFF women. The EFF women are getting black women cleaners insourced! That’s our feminism! #EFFWomen”.

Davis does not need a sign of where we are because the black women of South Africa, who make up the majority of our leadership structures, whose needs we cater most to, know where we are. We would not expect a white privileged woman, who refuses to acknowledge our political subjectivity, to know where we are.

She must go ask the women who call us at all hours of the night asking for help because of rape or abuse, the ones we take into our homes, to places of safety, to police stations, to hospitals, for counselling.

She must go ask the woman who was gang-raped, then dismissed from work, where we are.

She must go ask the women with severely disabled children who do not have wheelchairs and cannot get their children to school, where we are.

She must go and ask the women who open rape and abuse cases, where the SAPS and NPA stalls in processing their cases, where we are.

She must go ask the women who we assist with getting paternity tests for their children so they can get maintenance, where we are.

She must go ask the Marikana widows whose husbands were slaughtered within 24 hours after Ramaphosa called for “concomitant action to address this situation”, where we are.

She must go and ask the parliamentary bouncers who beat us up for holding the executive accountable, where we are.

She must go ask the rapists and abusers who were once councillors, leaders or staff in EFF, where we are.

We have ensured that we have a conducive environment within our structures to deal with misogyny and patriarchy. Our structures know that we protect the EFF by reporting abuse and NOT by covering it up. Our voices cannot be ignored nor erased in the EFF because we are the EFF and the EFF is us. It is Davis and the like who continue ignoring and erasing our voices. In fact, they erase and ignore our voices for the very same EFF voices they refer to as “toxic masculinity”.

Davis can’t find us because she is not where we are. We are among the gogos who her pal Brown ordered to be monitored by her special ops team. Will we find Davis fighting for the dignity and freedom of association of the gogos? It’s fine if we don’t, because we will, Madame Davis.

Davis, Brown and the likes do not have a monopoly on threats of violence, rape and social media abuse. All of us in the public space are at the receiving end of this evil.

We get messages telling us to go suck dicks of EFF men because that’s all we are good at. We receive messages where our mothers’ vaginas are at the receiving end of the vilest language. This obviously does not mean that that verbal abuse against women journalists is justified because we endure the same abuse and threats. We are saying it can only be destroyed if we fight against it in solidarity.

This violence will not be eliminated when voices and activism like ours continued to be erased. When black women activists are reduced to nameless bodies whose work is unseen. Our work and voices may be invisible in Davis’s eyes, but it is valuable to us and our constituency — the unemployed and working-class black women. DM

Leigh-Ann Mathys is Treasurer-General of the EFF and a Member of Parliament.