The Handmaid’s Tale’s Ane Crabtree, on dressing the...

The Handmaid’s Tale’s Ane Crabtree, on dressing the oppressor and the oppressed 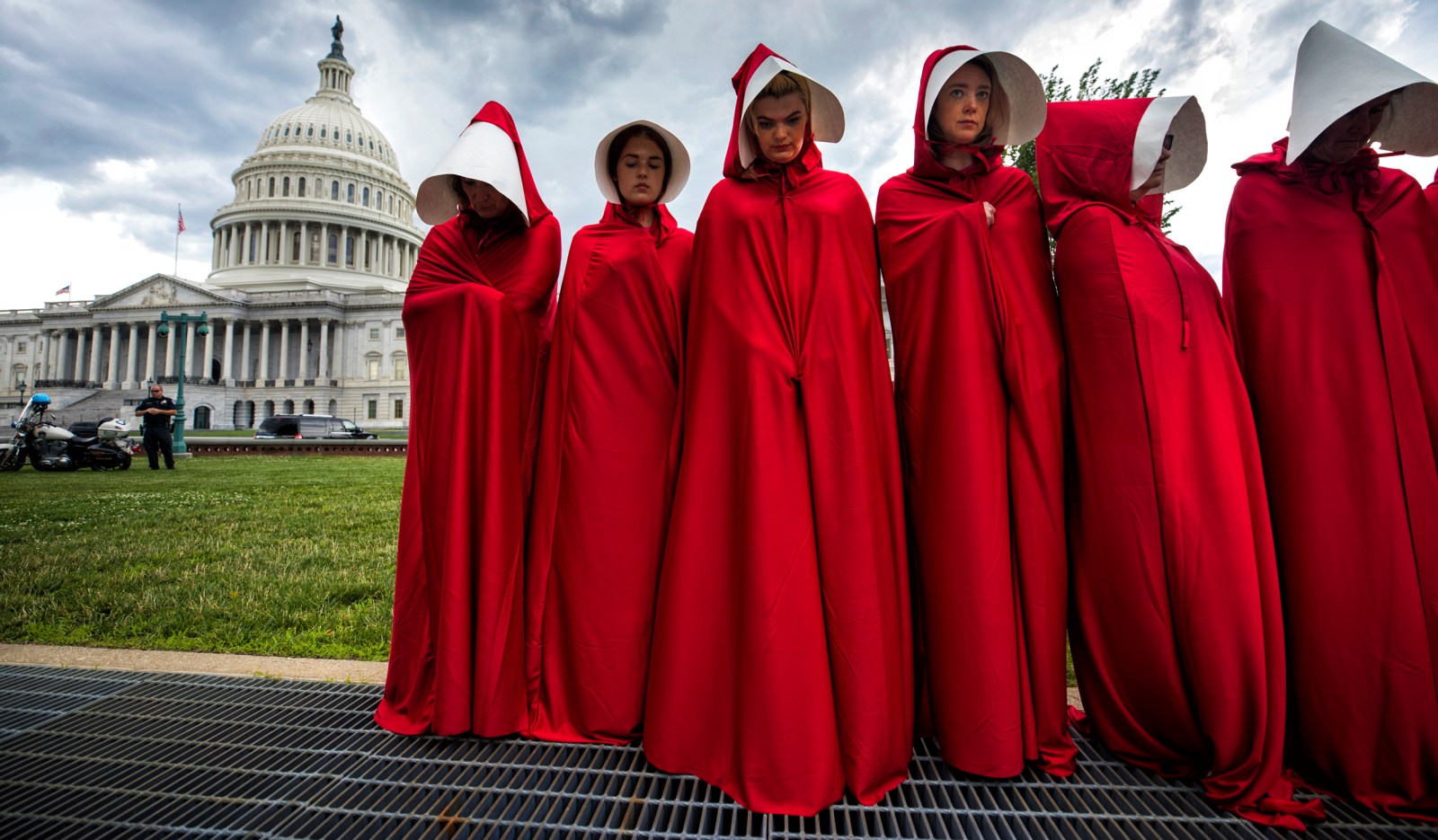 Supporters of Planned Parenthood dress in costumes from the dystopian novel The Handmaid's Tale to protest the Senate Republican's health care bill outside the US Capitol in Washington, DC, USA, 27 June 2017. Earlier in the afternoon, with five Republican Senators saying they would not vote for the bill, Republican Majority Leader Mitch McConnell announced he would not put the bill to the floor for a vote. EPA/JIM LO SCALZO

Ane Crabtree, the costume designer behind The Handmaid’s Tale, on how she empathised with the characters of the hit series to create the costumes that went beyond fiction to the frontlines of ‘The Resistance’.

“I feel like it’s kind of my life’s work in a strange way. I hope it’s not all that I end up doing but I think it’s my best work,” says Ane Crabtree, the costume designer behind the first two seasons of the hit series, The Handmaid’s Tale.

Indeed, while Crabtree has an impressive portfolio that includes influential series like The Sopranos, Masters of Sex and Westworld, as well as 28 years of experience in the industry, it is her work in bringing to life the costumes initially imagined by Margaret Atwood, author of the 1985 novel, that has demonstrably captured the public imagination, and earned her two Emmy Award nominations and a Costume Guild award.

Early this year, she was invited as one of the international speakers that took the stage at the 2019 edition of the Design Indaba Conference; there, she spoke about her approach to costume design, as well as childhood experiences that influence the way she relates to the characters she dresses.

Filmed & edited by Malibongwe Tyilo at the 2019 Design Indaba

“It all started in grade school, in Kentucky, where nobody looked like me and my family. I had to fill out the census forms and they were like, ‘here’s white;’ ‘here’s black;’ and I had to check ‘other’,” says Crabtree, laughing.

People would assume she was Chinese, and then Vietnamese.

“And if she’s Vietnamese that means she’s responsible for the Vietnam War. All those boxes are bad news. Don’t let others put you into little boxes, unless those are the boxes you create yourself,” says Crabtree, who then explains that in her family’s ancestral history, they are a mix of multiple ethnicities.

“I can’t check all those boxes. And even if I did, you would still be saying, ‘I don’t understand her, what is she?’ Hopefully, those little boxes will be crushed; unless you find comfort in them, because some people do. For me, it feels so archaic.”

In the fictional Republic of Gilead, where the events of The Handmaid’s Tale take place, fertility rates have collapsed. The power-hungry leaders use an extremist interpretation of religious texts to impose a system that leads to the conscription of the few remaining fertile women, putting them into a box that determines a horrifying fate. They are assigned to the homes of the rulers, where they are stripped of their rights and their birth names, and then forced to submit to ritualised rape so that they may bear children for the ruling elite and their wives.

Fans of the show will remember the introduction to the terror of the ritualised rape, first seen halfway through the first episode of the first season, where the Commander, Fred Waterford (Joseph Fiennes) engages in the ritual, while his wife, Serena Joy (Yvonne Strahovski) holds Offred (Elizabeth Moss), the household’s handmaid, down to the bed by her wrists.

Perhaps one of the more complex characters through the first two seasons is Serena Joy. While she is clearly complicit in the subjugation of the handmaids, she also has to deal with her own diminished role as a woman in the Gilead universe. At times, viewers are encouraged to sympathise with her, not only by the plot and cinematography, but also through her outfit.

The horror of the oppression visited on the handmaids in the fictional series has resulted in women in different places across the world donning the handmaid’s red and white costume in protest over current issues in our very real world: pro-choice protesters in Ireland, Argentina, Poland, England, Washington DC and Texas are just some of the locations.

“The novel really influenced me 30 years ago. I was in my early 20s and I’d just moved to New York five years earlier. That book absolutely transformed my life and my thinking about feminism, and about being a woman,” says Crabtree.

In constructing the outfits that play a huge part in defining the characters of the series, she wasn’t wary of digging into her own personal history with being ostracised.

“It is very difficult for me not to bring the personal into the design, and it’s something I used to fight against. But it actually works for me. What I find is that I get so emotionally attached to each character, to each storyline. I come from a place of ‘ugly pretty’, and ‘pretty ugly’. What it means is that there has to be some tension when you look at someone’s clothing, it can’t just be beautiful, it has to be memorable. It has to be so fucking scary and real that you believe this is a very true story. That this could happen. So, if you throw a little ugly into the pretty and a little pretty into the ugly, that’s actually real life. For those women, there was always something very horrific, to subjugate them – women, out of their own power. What I did was try to create these small beautiful moments in the clothing to soothe the actors and the characters, even the worst, [like the] commander.”

The significance of the Handmaid’s costume in popular culture, as well as protests, led to it being added to the permanent collection of the Smithsonian National Museum of American History, an honour that Crabtree does not take lightly.

“Maybe a few hundred years from now, we’ll be looking at that and saying: that was a moment in time, when women stood up, just like they did during the suffragettes’ era. The only unfortunate thing is, we’re still fighting for the same damn rights.” ML