Writing the 2019 Elections: Appeasing the EFF can only be a disaster for the ANC 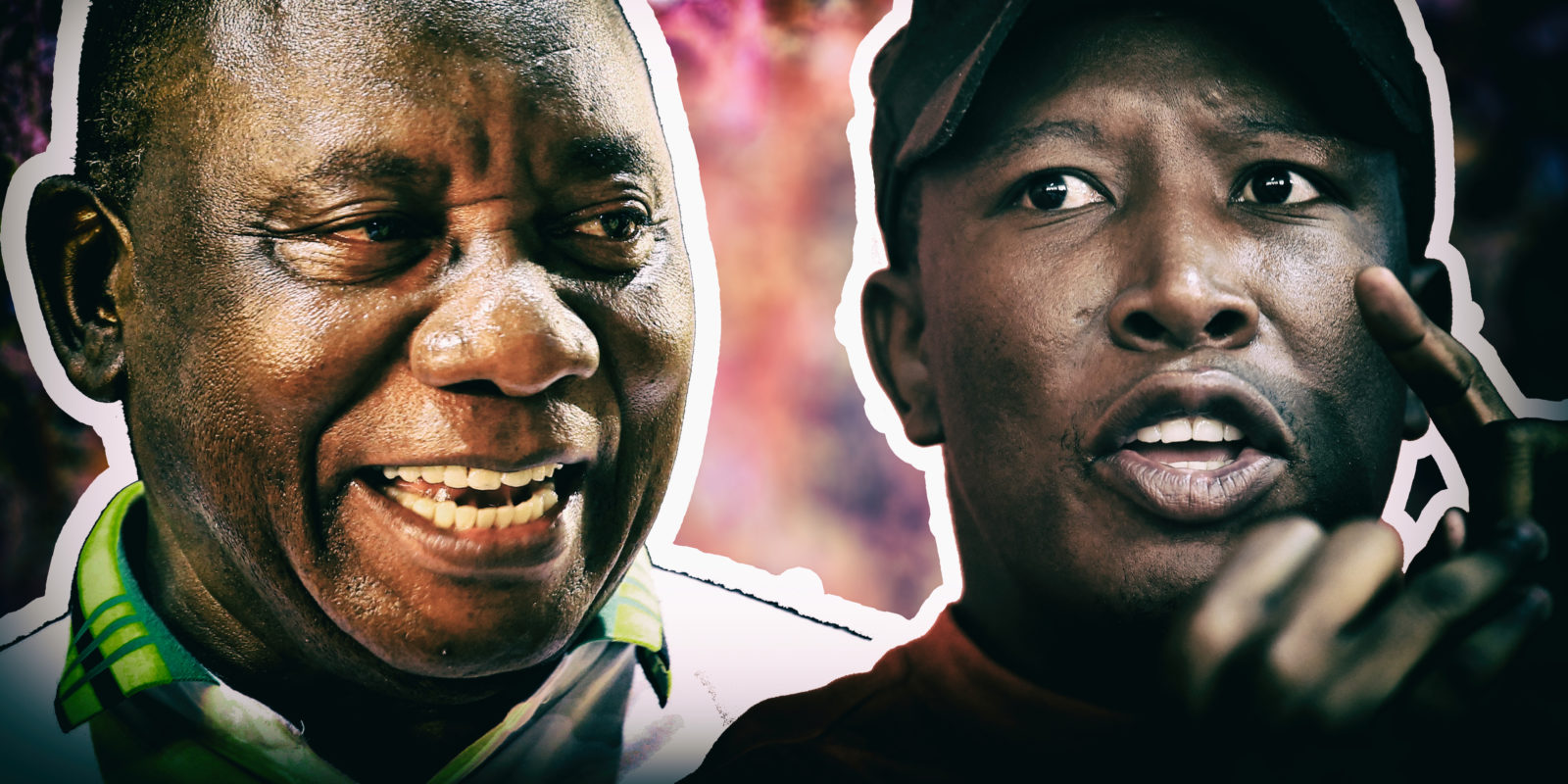 With the election eight weeks away, the EFF appears to have made something of a pincer movement on the ANC. They have prodded the ANC on policy, and made it more inviting for disaffected ANC members to join their ranks. In the meantime, the ANC seem to have caved in to two of the EFF’s main policy demands – that the Constitution be changed to effect land expropriation without compensation, and that the South African Reserve Bank be nationalised.

The ANC appears to be slinking towards appeasement of the Economic Freedom Fighters (EFF). This appeasement could backfire on the ANC, with disastrous consequences for South Africa. Of course, this apparent appeasement may simply be a convergence between the two parties, or compromise by the ANC.

It is the likelihood of appeasement that is emerging from the ANC that is cause for concern. What this means, in effect, is that the ANC would capitulate to a dangerous political ally, one that holds potentially violent implications for South African society, in the hope that the EFF would cease to be violent, that they would become more tolerant, less vituperative and vengeful, and more respectful of women and “non-African” minorities. The evidence suggests that the EFF cannot be relied on to help build a more cohesive and stable society with high levels of trust among the population.

It is clear, from the evidence, that the EFF will not compromise on its own policies, strategies and tactics, and through appeasement that the ANC could lead the country to a more powerful and more dangerous situation. Let us run, as briefly as possible, over the evidence of EFF behaviour – before we look at the way the ANC might be appeasing them, and what this could mean for the outcome of the elections in May.

There is a significant body of evidence to suggest that the EFF is a dangerous political formation that thrives on the politics of revenge and recrimination, with a deeply undemocratic understanding of the role of journalism and the media in democratic society. A most cursory look at some evidence will confirm this, bearing in mind that this is the movement that the ANC appears to be appeasing.

First, the EFF’s relationship with the media, and individual journalists, has become increasingly violent and potentially life-threatening. The EFF deputy leader, Floyd Shivambu, has referred to the journalist Carien du Plessis as “a white bitch” and in 2018 he physically attacked the journalist, Adrian de Kock. Julius Malema started gaslighting individual journalists and media outlets, and last week provoked a barrage of verbal attacks and threats of rape against the broadcast journalist, Karima Brown. By one calculation EFF leaders and their following have verbally attacked journalists at least 10 times over the first two and half months of 2019.

Second, the EFF leaders have also used toxic language and expressions against people whom they consider to be “non-Africans” – most notably whites and people of Asian heritage. Shivambu has been especially insulting towards Ismail Momoniat, a highly respected and trusted official in the National Treasury. Malema has referred to Pravin Gordhan, the Minister of Public Enterprises, as a dog of white monopoly capital. With specific reference to the Mayor of Port Elizabeth, Athol Trollip, “a white man”, Malema told his followers that they would be “cutting the throat of whiteness”.

Third, EFF leaders have also been implicated in criminal activities and physical violence. Malema’s possible role in rampant corruption in Limpopo has yet to be fully uncovered. A thorough forensic investigation should also be done on the ways in which Malema became enormously wealthy, and the exact role and benefits Shivambu drew from the VBS banking scandal.

Finally, Malema has been caught on camera firing what appears to be live ammunition in a public space. His deputy has physically attacked a journalist, and most recently – following February’s SONA, and in an apparent continuance of EFF “thuggery” – an EFF leader, Marshall Dlamini, slapped a police officer, Johan Carstens. Dlamini would, afterwards, use the ruse that Carstens was a racist.

It is important to bear in mind that eight weeks before the election, none of these violent activities has resulted in legal action. Also, this is the party the ANC is trying to appease.

The most prominent historical case of appeasement is the Munich Agreement of 1938, when British Prime Minister, Neville Chamberlain, signed a pact with Adolf Hitler after privately meeting the dictator at his mountain retreat, Berchtesgaden. After the private meeting, Chamberlain was convinced that Hitler’s territorial demands were not unreasonable, and that Hitler was a “gentleman”. The British Prime Minister declared after signing the Munich Pact that the meeting had achieved “peace in our time”. Within a year, Hitler’s troops invaded Poland, and Chamberlain was forced to admit that Britain had entered into a state of war with Germany.

Historical differences notwithstanding, the ANC appear to have effected a convergence between a set of their own policies and those of the EFF. This will, no doubt, appease the EFF and attempt to bring them into the tent, so to speak.

As leader of the ANC, Cyril Ramaphosa has suggested that Malema should lead his party back to the ANC.

“We received back a number of people who left and went to form COPE.” Ramaphosa said.

“Others who left and went to the UDM are back with us. And of course, the EFF members we would want to welcome them back. We would love to have Julius Malema back in the ANC. He is still ANC down, deep in his heart. So, we would like to have those who are in the EFF back in the ANC, because the ANC is their home,” Ramaphosa has said.

We get to the position, then, with eight weeks to go before the election, that the EFF appears to have made something of a pincer movement on the ANC. They have prodded the ANC on policy, and made it more inviting for disaffected ANC members to join their ranks. As one Member of Parliament told Daily Maverick, if you lose your seat in the back benches of the ANC, you get to join the front benches of the EFF.

In the meantime the ANC seems to have caved in to two of the EFF’s main policy demands; that the Constitution be changed to effect land expropriation with compensation, and that the South African Reserve Bank be nationalised. The EFF would, also, claim that they initiated investigations into corruption into the dealings of former President Jacob Zuma, but the Press should take almost all credit for that.

While there is no significant danger in the SARB being nationalised, at the level of perception it is a disaster on two fronts. First, it gives the impression, perhaps correctly, that the ANC will proceed with the nationalisation to appease the EFF. Indeed, in August 2018 the EFF proposed a Bill to nationalise the SARB. Nationalisation of the SARB has been a long-time aspiration for Malema and the EFF.

“The general practice in the world is that governments own their reserve bank. South Africa is one of the two, if not three, that do not own their own reserve bank,” he explained as far back as 2013.

The ANC would, of course, insist that the expropriation of land and nationalisation of the SARB were part of its own mandate. The question may be asked, why now, why is the ANC pursuing these policies in the weeks and months before the election? It could be because there is a convergence between the ANC and EFF, or because the ruling party has reached a compromise. Either way, when linked to the ANC’s invitation for the EFF to return to the mother ship, it does seem a lot more like appeasement.

What the ANC does not seem to understand is that most people who support the EFF do so because of opposition to the ANC, because of carefully concealed nativism, opposition to “non-African” minorities, because they support rapine – the willful acquisition of property owned by white people, and whatever is on the property. This is driven by the otherwise noble objective of land reform and distribution.

Ultimately, the EFF’s charge sheet (above) has not turned many of its followers away, and will probably not do so any time soon. For the rest of society, the EFF’s ignorance of how the media works, their failure to respect freedom of speech (and of the media), their violence and their possible ties to corruption, will only embolden EFF loyalists. They have a ready-made ruse of racism. It is on these matters that the ANC may fail to stop the onward march of the EFF. DM

When it comes to alcohol, know your limits and watch your health