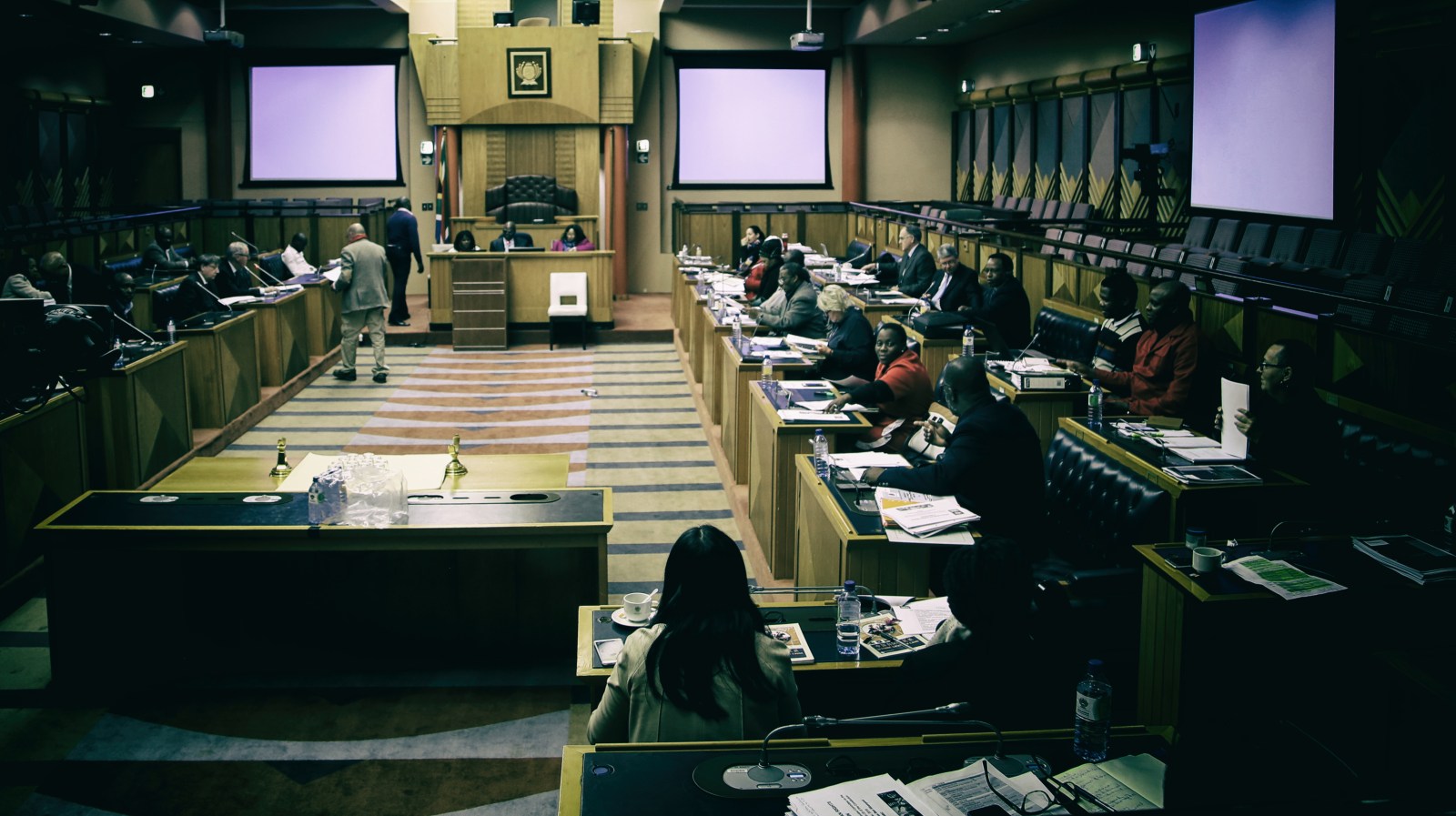 Parliament's constitutional review committee holds the last phase of its hearings where oral presentations were made on whether to amend the Constitution to allow for land expropriation without compensation. 6 September 2018. Photo: Leila Dougan

Amid above-inflation electricity tariff hikes and steep petrol price increases, Eskom’s restructuring and the political noise some eight weeks before the 8 May elections, land expropriation without compensation has slipped somewhat out of the spotlight. But the parliamentary ad hoc committee on changing Section 25 of the Constitution is ploughing on.

When political rhetoric and law-making collide, there can be odd consequences. In early December 2018, the National Assembly adopted the constitutional review committee’s recommendation that there should be a constitutional amendment to expressly allow compensationless land expropriation. And that should be done before the current Parliament rises for elections, as it will on 20 March 2019.

That such a deadline would not be met was clear even in the then absence of a polling date, as the committee adopted its report on 15 November 2018 on some nine months’ work, including 34 countrywide public hearings.

“The process of actually amending the Constitution will not going to happen until after the elections.”

Linguistic slips were blamed for the deadline that slipped into the report; it was not fixed before the report went to the House, and was adopted, on 4 December 2018, with 209 votes for and 91 against.

On the back of this, the current ad hoc committee to amend Section 25 of the Constitution was established, chaired by Thoko Didiza, also a House Chairperson of the National Assembly and a former land minister in the Thabo Mbeki administration.

And the ad hoc committee is ploughing on, even if it is expected before the end of the term to bring to the House a report asking that its work be referred to the incoming, post-elections Parliament to pick up the lawmaking.

On its own officially adopted programme, a Constitutional Amendment Bill is not expected before early May. With a 30-day public comment period and potential public hearings, further deliberations before a vote requiring at least a two-thirds majority in the House before the matter goes to the National Council of Provinces (NCOP), it’s clear this amendment most optimistically may only see the light of day late in the second half of 2019.

And then, it requires legislation to put into operation the new compensationless expropriation provisions. But the Expropriation Bill has not yet landed in Parliament.

But in an election year, the politics are important. The state of play right now means everyone can go into the elections with expropriation without compensation a campaigning point — as a deliverable for the ANC and EFF, or as a rallying point to fight against for the DA, Freedom Front Plus and Cope, who are deeply opposed to any constitutional changes.

For President Cyril Ramaphosa, this process is what fine-tunes the delicate balancing of messaging to overseas and domestic investors and the ANC faithful ahead of hotly contested elections.

At the weekend he handed over title deeds in two settled land claims for 10 communities near Pretoria.

On Thursday in his Q&A in the House he had acknowledged compensationless land expropriation had been raised by overseas investors — his administration is also on a drive for $100-billion investment over five years.

Ramaphosa, who has previously described land dispossession and inequality as South Africa’s “original sin”, also told MPs that land redress was part of required social justice. And this process was undertaken right there in Parliament.

On Friday, Parliament’s ad hoc committee to amend Section 25 of the Constitution held its second briefing session with experts.

Advocate Tembeka Ngcukaitobi told MPs reasons for the failure of land reform included a focus on the past rather than ensuring land reform and redress going forward.

While the government had spent R54-billion to acquire 7% of commercial agriculture, according to an interaction he had with Rural Development Minister Maite Nkoana-Mashabane, crucial points were the failure to pass legislation to support equitable access to land and tenure security, as was the constitutional imperatives arising from Section 25.

Parliament was fortunate not to be taken to court for this constitutional failure, he said later.

Lawmakers should look beyond simply amending the compensation clauses of Section 25, to also ensure giving effect to ensure security and equitable land access. And while nil compensation may be possible, Ngcukaitobi cautioned against making this the default position — communities such as Xolobeni in the Eastern Cape and Hlabisa in KwaZulu-Natal were vulnerable to losing their land to mining — and their only recourse for compensation was through the Constitution.

“It is true we are concerned mostly with a debate how to take from the whites because they took the land unfairly, which is perfectly understandable, but I don’t believe we can design a clause that will make non-compensation the default position,” Ngcukaitobi told MPs on Friday.

“For the most part we still need a flexibility around just and equitable compensation because a lot of cases will deserve compensation.”

“It’s not simply a technical process… That would be inadequate. Parliament would have to set out a programme of what needs to be done,” said Sachs.

Both Sachs and Valli Moosa, ANC politician and former Cabinet minister now sitting on various boards from Anglo American to the WWF, dismissed the politicking that Section 25 of the Constitution, or the property clause, was crafted to appease whites.

“It was not true Section 25 was drafted in order to appease and protect land held illegitimately by white people,” Moosa told MPs two Fridays ago, explaining that in the process of Constitution, drafting it was important for African people to be owners, given the history of dispossession and forced removals.

“I am still satisfied the right decision was taken,” said Moosa. “The lack of land reform is not because of Section 25. It is about other things. If I say any more I will end up attacking my party (the ANC).”

Professor Ruth Hall, from the University of the Western Cape’s Institute for Poverty, Land and Agrarian Studies (Plaas), told the ad hoc committee a swathe of legislation was needed alongside the constitutional amendment.

Beyond an expropriation act, also needed was a redistribution bill, to put into operation access to land and the process citizens can follow, and a land records bill that recorded the various rights people had to land, be it straight ownership, labour tenants rights or long-term tenancy, at the local level.

Test cases needed to be taken to the Constitutional Court so jurisprudence could be established about what just and equitable compensation meant. And, critically, a compensation policy needed to be formulated.

“There has been a lot of Constitution-blaming, but Section 25 actually is the mechanism for land reform redistribution and restitution. It doesn’t say anywhere compensation must be cash and immediate, or market-related,” Hall told MPs earlier in February.

On Friday, advocate Wim Trengove argued more than just expropriation without compensation was needed to bring about the need for land redress in line with political and constitutional imperatives.

Like Ngcukaitobi, and also Hall, Trengove pointed to “three spaces” in Section 25, in reference to tenure security, land reform and redistribution, where action could and should be taken in line with the political and constitutional imperatives of just redistribution of land.

But land reform, redistribution and restitution is complex. In February Parliament’s public works committee was told about 3,653 parcels of agricultural land, totalling some 2.9 million hectares, were available for redistribution, with most in the North West, followed by Limpopo. And 43 land parcels are being transferred to Rural Development for its accelerated land reform programme announced in February’s State of the Nation Address.

The presidential expert advisory panel on land reform and agriculture, established by Ramaphosa in September 2018, heard from the Land Claims Commission at its February meeting that the land restitution process has to date restituted 3.5 million hectares at a cost of R21-billion — in 27 cases land subject to restitution claims was expropriated — while paying out R14-billion in financial compensation.

A total of 2,117,644 people benefited, according to a statement from the panel — although these statistics do not seem to gel with what MPs heard on Friday, raising questions about government’s own set of numbers.

“Land reform is about achieving social justice and realising the vision contained in the Constitution, namely to transform racial inequality and reduce poverty. Most important, ‘over-judicialisation’ of land reform was cautioned against and courts were advised to only play a residual role,” according to the statement by Vuyo Mahlati, the chairperson of the panel that is set to submit its report on land reform to Ramaphosa on 31 March.

And somewhere among these various processes, and numbers, land reform might finally get the political spine its been missing. Political promises have been made. DM