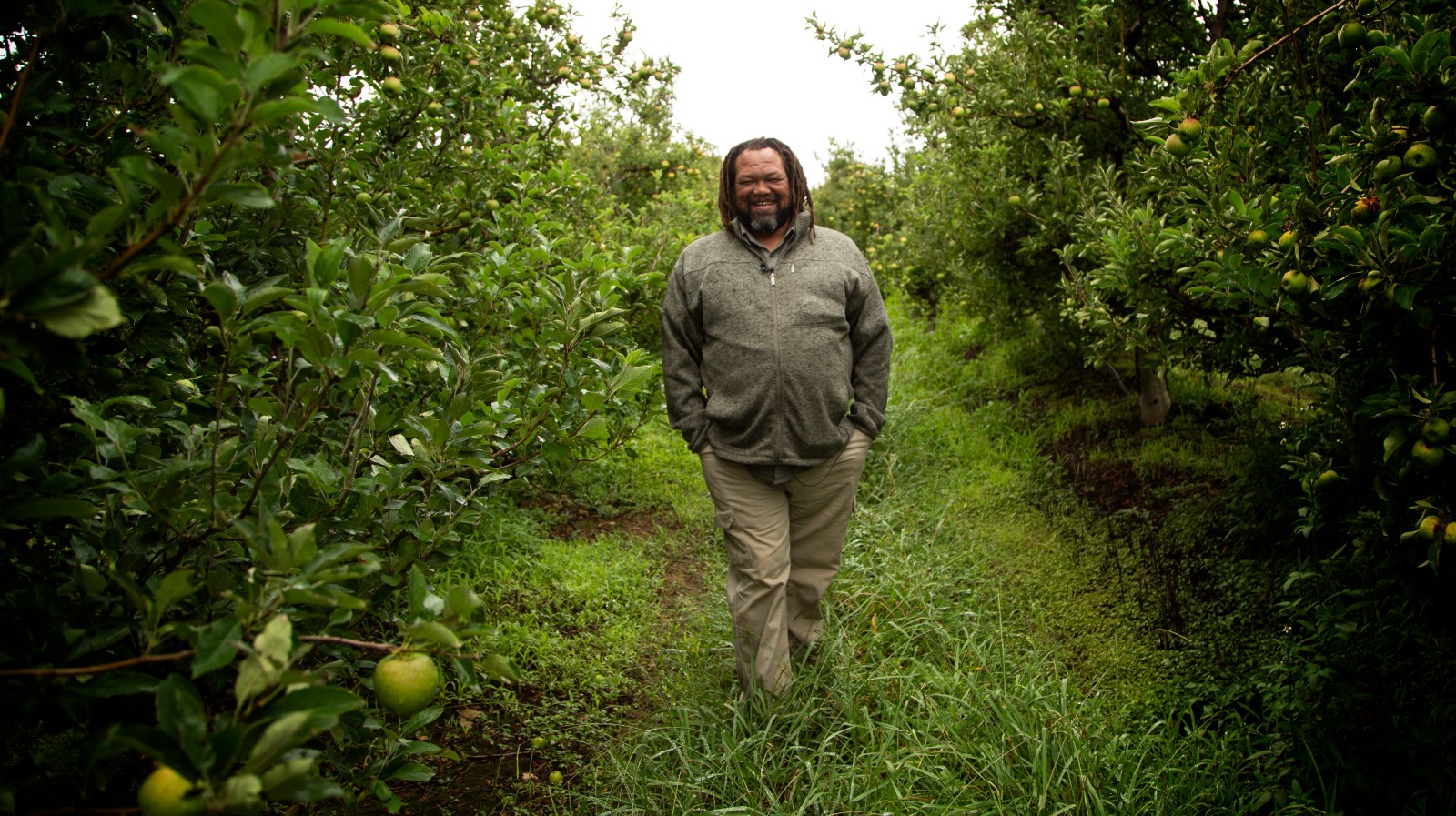 Errol April, a fruit farmer and former MK-veteran at his farm, Amanzi, just outside Greyton in the Western Cape, 15 March 2018. Photo: Leila Dougan

Errol April is an MK veteran who grew up on the Cape Flats. Fruit farming is a long stretch from what he knows: explosives and bombs. But since the government made available 211 hectares of prime agricultural land in the Southern Cape wine region to him in 2013, April has proved his doubters wrong.

“The sentiment that black people can’t farm, we should throw that out the window”, Errol April says.

More surprising than April’s success as an apple and pear farmer is his view on land expropriation. With help from a white Afrikaans mentor, Wilmer Ferreira, and the government’s Proactive Land Acquisition Strategy Programme, April turns a modest profit on just under a quarter of his land, selling fruit to demanding European consumers. The rest of his land, he says, he doesn’t need.

Or rather, as an activist who fought for the emancipation of the black majority, he believes his land should be shared: “If the land is there, it should be given to the workers, because the Freedom Charter says so,” he said.

Doesn’t he lay awake worrying about the government coming for his property?

“There should be no reason for me to have sleepless nights about the rest of the land which I’m not farming.”

April’s views and comfort level contrast sharply with those of thousands of landowners who opposed amending South Africa’s constitution to strengthen provisions for land expropriation without compensation.

According to University of the Western Cape land expert Prof Ben Cousins, many of these farmers are trying to hold on to under-utilised land.

“About 20% of farmers produce 80% percent of the food. If we target land acquisition to the under-used farms we can hold the risk of food insecurity at bay while we proceed with a large-scale radical land reform programme.”

On the other hand, South Africa is relatively self-sufficient. We produce 12.9-million tons of maize per year, and after the recent drought in 2016/17 only 2.1 million tons of wheat had to be imported. Millions of families in South Africa’s big cities and towns can rely on well-stocked supermarkets for their daily bread.

Perhaps the biggest irony of our food system is that most of those suffering food insecurity live in rural areas close to productive land. Surely land expropriation must have them in mind, while still feeding the urban masses and avoiding the elite capture that soiled Zimbabwe’s jambanja land transfers?

Perhaps when President Cyril Ramaphosa says we should pursue land expropriation cautiously, “in a way that does not harm the economy”, it’s because he recognises this dilemma. Or are Ramaphosa and the economic mainstream of the ANC, preoccupied as they are with foreign investment and fiscal austerity, performing a pre-electoral dance with land expropriation, with no taste for accelerating land reform at all?

Jacob Zuma’s loyal rump of ANC cadres certainly know it’s time to exploit land reform for political gain. They presumably hope that it will help them regain control of the party.

In a future, more egalitarian South Africa, we would certainly strive for diversified, decentralised land ownership, and perhaps some collective ownership of farms (removed from private profiteering and speculation).

The EFF wants us to arrive at this kind of outcome tomorrow, or at least within a few months of the Red Berets winning the elections. Critics say that’s a recipe for annihilating the monetary value of all land and driving away agricultural investment. According to Ernst Roets of AfriForum:

“There have already been studies that found that the value of agricultural land in the country has declined significantly just in the last year. Why? Because people who own land want to sell it but people don’t want to buy it. Because you don’t have certainty.”

Perhaps a fall in land prices is not such a bad thing if it drives away land speculators and multinational land grabbers. But in a worst-case scenario, our entire capitalist agro-industrial machine could fall apart overnight. The day the EFF give you a plot of land, its market value might be zero.

The DA’s response: don’t mess with the markets. The government should instead continue to buy available farms. But, this “willing buyer, willing seller” policy is a hand-me-down from the ANC, having failed to shift more than a few percent of agricultural land into black hands over 25 years. Given our present fiscal crunch, it seems unlikely the DA would easily find the trillions needed to turbocharge this approach. And piling on agricultural credit is no solution, given the country’s high bankruptcy rates.

The DA’s other manifesto suggestion is their promise to hasten the transfer of title deeds into individual hands. This is relevant especially in former homelands, where kings and chiefs administer land on behalf of rural people, a system hated by many rural women. According to Sizane Ngubane of the Rural Women’s Movement, “The leases issued by the Ingonyama Trust board undermine, rather than enhance, women’s security of tenure.’’

In trying to break up customary land ownership, the DA is pitted against the likes of King Goodwill Zwelithini, custodian of three-million hectares given to his trust by the former apartheid regime. It’s unclear how many rural Africans would back the DA against the Zulu monarch.

Land is not just about the economy. Land is about historical redress and African identity. Apartheid dispossessed millions based on race and dumped the black majority on the worst land in the country amounting to only 7% of available land.

AfriForum claims that race-based restitution will be equally unjust, and cites polls which say the majority of (urban) Africans don’t want (rural) land as a first priority. What the likes of AfriForum fail to acknowledge is that land has become a proxy for the failure of economic redress more generally in the country.

The majority of South Africans certainly want an increased stake in their future. A reduction in inequality. In the absence of any creative redistributive policies by the ANC for the past 25 years, land has become the centre of today’s conversation.

Which probably explains the ANC’s quandary. In featuring land expropriation in the 2019 manifesto, it’s a bit like them saying, we know that we’ve failed you, but we’ve changed, we are ANC 2.0. We will even amend our own Constitution to prove it. The question is can South Africans believe that they will implement a serious land reform programme?

One thing is certain, we must find the courage to think out of the box. To look for new models of land transfer and ownership, even if these threaten those with excessive land holdings.

The alternative is likely to be a rural revolt, which in the worst case may be led by ruthless politicians using the land to stoke up racial/ethnic hate.

Early results from The Big Debate’s national poll this week shows that over two-thirds of South Africans feel that historic dispossession justifies land expropriation. The DA and AfriForum cannot wish away these numbers.

As we look for alternatives, we must learn from what is working on a micro level. Such as an agricultural co-op near Ficksburg, in the Free State, where Earthrise Trust has reserved 138-hectares for collective ownership of agriculture and livestock. With help from outside funders, farming at Naledi village is conducted by the community for the community. Similar examples exist in the Ntinga Ntaba ka Ndoda community in Keiskammahoek, Eastern Cape and the Mdukatshani community in Msinga, KwaZulu-Natal.

And don’t be fooled into thinking that large scale land reform is necessarily a recipe for capitalist collapse. In South Korea, the process of land reform was driven from the top to dislodge a politically-backward elite (which had supported Japanese colonisers), and redistribution became the strategic backbone behind that prosperous country’s middle class. Land reform movements from the bottom made significant gains in Nicaragua and Brazil.

South Africa also had a Landless People’s Movement in the early 2000s, until it was infiltrated and demobilised.

Perhaps in Naledi, Keiskammerhoek, Msinga and on April’s farm in Greyton, we can find the inspiration to rebuild a movement. Aletta Muller has been working on April’s farm for more than 20 years. She has joined her boss’s call for land redistribution to feed her family of five.

“My dream is that if one day I get a piece of land, I will farm vegetables.”

April’s message seems to be that the biggest obstacles to sharing land are political expediency and a mixture of fear and greed.

“We know it’s elections, we must not use land as an election tool. We must use it as a tool which gives high morale to South African people,” says April.