The art of bread, aroma, flavour and passion 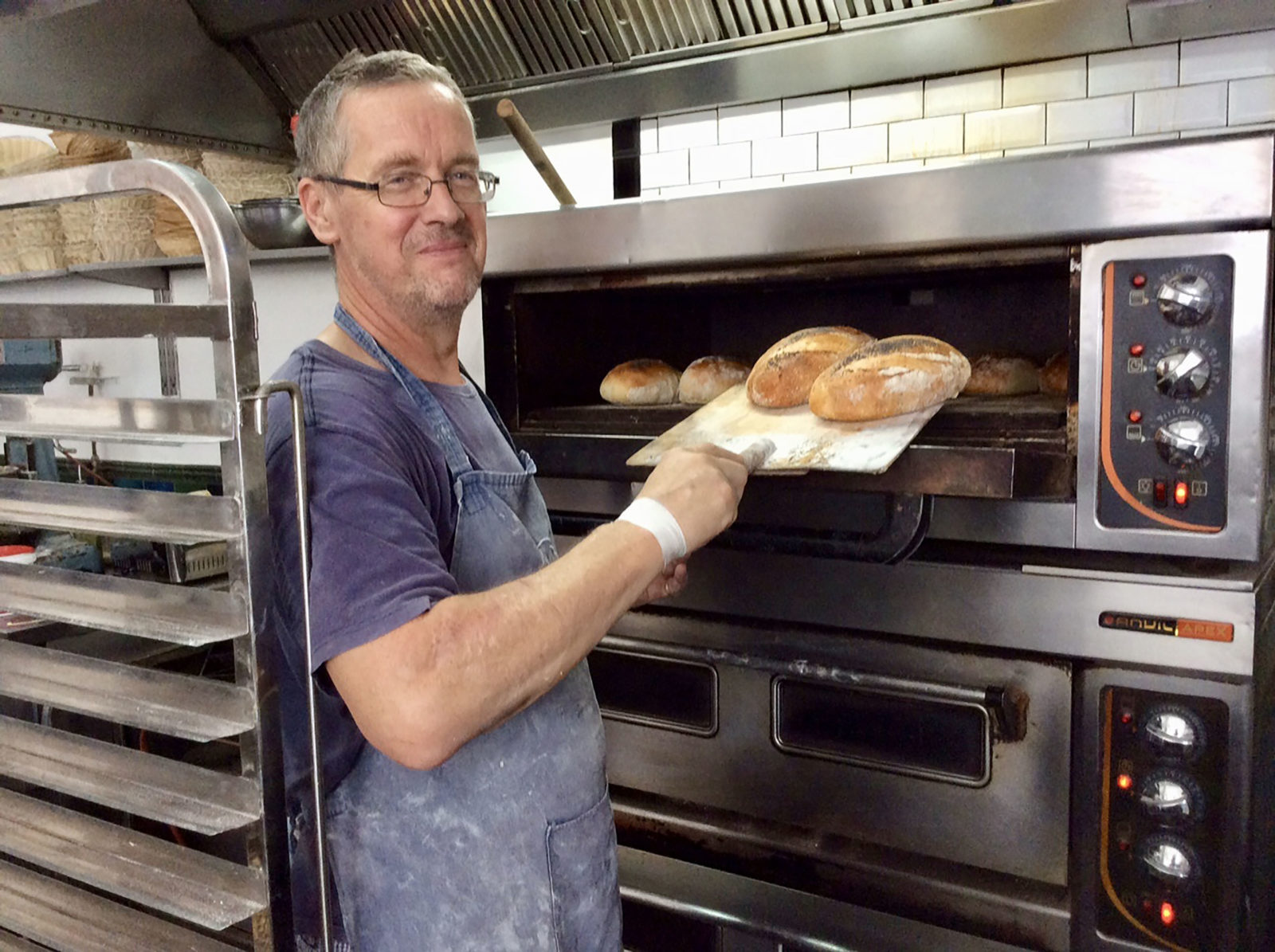 Adam and Carin Robinson opened The Glenwood Bakery six years ago. It is a neighborhood gem and one of a handful of places in Durban that one feels would flourish, exactly as it is, in any major city that appreciates an artisanal, uncompromising commitment to tradition and flavour — this achieved while making the tastebuds do a happy jig. The former great British chef was legendary a long time before Durban got lucky. So what’s his story?

It all started with a pig. Then there was that carrot.

Now there’s this man, who once upon a time back in the late 1980s was one of London’s legendary chefs. He is at an oven in The Glenwood Bakery kitchen at 10 on a Sunday morning. He has been in the bakery for going on nine hours. For the first two he baked and prepped alone as the new assistant baker, just transferred from the day team, which handles breakfasts and lunches, is still getting used to the godforsaken times baking demands, and overslept.

But all is in hand. Dough for tomorrow, mother included, has been prepped and put to bed in the refrigerator in crib-like containers: “Like children.” The new baker is busying himself twisting grissini sticks.

And Adam Robinson is showing me how to know if loaves are perfectly baked and ready to come out the oven. In this case, the loaves are the final bake from a procession that has been coming out in orderly sequence since 6am. Of the 200 to 300 loaves made each day, 60% go to restaurants and outlets around the city. Consistency is key.

Today, as on other days, the viennoiserie, including croissants, pains au chocolat and pains au raisin, plus the sourdoughs were first out. Bâtards and the potato and rosemary bread are generally last.

He removes two loaves with his shovel-like peel. There are people, he says, who advise knocking the base of the loaf to tell if the bread is ready. Then there are those who advocate using a thermometer.

He, however, finds it most reliable to weigh the hand-formed dough before it goes in. Then, if you know exactly how much moisture should be lost during the baking process, which he does, the weight gives the most accurate measure of when to take it out.

When I arrive on the Sunday morning, Dr Carin Robinson is bussing tables. Dr Robinson, whose PhD is in philosophy, is the equal — but different — partner at The Glenwood Bakery. Among many other “owner” jobs, which include laundry deliveries and this morning, arriving with tubs of the hand-crafted ice-cream, churned in the Robinsons’ part-industrial home kitchen up the road, she puts out the whacky, witty, sometimes rambling, always entertaining messages with the inappropriately appropriate artsy pictures that alert one, on Facebook, to the weekly Glenwood Bakery breakfast and lunch menu options.

And also the Monday through Friday, 5pm to 9pm, pizza night selection (with additions and specials — and bring your own wine). More about these to come.

First let’s get back to that pig and that carrot, which is where the journey started that led to this moment, in this kitchen, with Adam Robinson: Soon to turn 60. Several times, to date, retired. Well, sort of retired. Although not exactly. And with no retirement plans pending.

Although the turning 60 is a biggie. They’ve already had a weekend party at a friend’s place at Bazley Beach where Robinson cooked up a paella for 40 people. And four days in Cape Town where they sampled restaurants. And they have 10 days in Istanbul coming up. All are combined birthday celebrations. Dr Robinson turns 50 the day after they get to Turkey. She knows surprises are planned. She doesn’t know what they will be.

But back to that pig…

When Adam Robinson was 22, he tells me, he was living in London, spending his time travelling, as one was inclined to do back then when nobody talked about gap years, but people gapped it with more frequency and for longer periods than they do now. He had no idea what he wanted to do in terms of career or life purpose. Between travel adventures he would wait tables. It worried his father, a conventional white-collar professional, a lot more than it worried him. Yet it was on his mind.

Until one day, in the restaurant where he was working, he tasted this delicious, mouthwatering, textured (my imagination is conjuring the description and likely doing it no justice) pork terrine. From a pig you could get this? The alchemy of the transformation awakened something in him. He spoke to a rather good chef who owned a rather special restaurant and asked if he could help out in the kitchen. For no pay.

“The first time I peeled a carrot, I knew,” he says. Something about the tactile nature of it all spoke to him. And the possibilities. He would cook. He would become a chef.

It was 1981, a time when being a chef had none of the glamour sitting just over the horizon.

When he told his father he was going to be a cook, well, not to directly link cause to effect, but: “He died not too much later.”

Sadly, before Adam Robinson achieved acclaim and became a big name in London, opening and running four successful and lauded restaurants. Google his name along with “London restaurants” and The Bollo, The Salt House, The Chiswick and The Brackenbury all pop up in one context or another. With accolades.

“Adam Robinson is one of the defining spirits of his age, a leading player who has shaped the gastronomy of the nineties.” This quote is on the bakery website, from Kit Chapman’s classic tome of the time, Great British Chefs.

One would have thought he might stay and relish his success, enjoy the celebrity chef lifestyle, perhaps go the TV route. But instead, he and his former wife and London restaurants partner, Katie Robinson, came on holiday to South Africa. In a property magazine they picked up, they saw a listing for a farm in the KwaZulu-Natal Midlands. They went to see it. Purchased it. Went back and sold up in London. And in 2003, retired to the Dargle Valley.

Six years later, yearning to cook again, Robinson revamped the Corner Post (and Bar) in Howick and opened there in collaboration with legendary, creative, notorious fellow-British star chef Dan Evans, who is credited with having opened London’s first “gastropub” in the 1990s. (In Durban, Evans’ successes include Havana and Pintxada, with the late Martin Lombard).

The food at the Corner Post was exceptional. Local, seasonal, imaginative, produce-driven, s-l-o-w, flavour-filled — it all goes without saying. But “30 people a week driving up from Durban was not going to put my daughters (he has two; Dr Robinson has two sons) through university”.

“The Midlands are OK. But Howick is a shit hole. It’s the Bible Belt.”

Howick and the Corner Post were the low-point of his career, he laments. “We were relegated to flipping burgers to service the locals and to keep going. It was so unsatisfying, aesthetically and in every other way.”

By the time he was able to get out, he didn’t want to own a restaurant again. By then, he and Carin Robinson were an item. And married. He’d been baking bread for almost as long as he’d been cooking. They decided to move to Durban, buy a house — and open a bakery.

When they were checking out a possible home on the market in Glenwood, they spotted what they thought was a coffee shop on a corner down the street. They strolled there to and have a cup. It was closed — had been for quite a while—and for rent.

By chance they had stumbled upon what would become The Glenwood Bakery. They signed for it before they bought the house up the street. And opened there on January 1, 2013.

They slowly built to a team of 20, including waitstaff, who feel like family when you go in. It is a light-filled, feel-good, friendly space. The best legacy of the Corner Post is Sithé Buque, originally from Mozambique, who came to Durban soon as they could work in a spot for him at the bakery and who heads the pizza evening team. “He has a remarkable flavour palate,” says Robinson.

The bakery held Robinson for three years. Then he had the urge to cook again.

There were flurries of delight among former Corner Post and Glenwood Bakery café fans when the Robinsons’ announced they would open what became Glenwood Restaurant. Robinson said he would focus on pasta. In conversation he expresses the sensual nature of working with pasta. Similar to bread, but more so. And fermentation comes into any conversation. It is a favourite subject and study. Something of a passion and obsession with her husband, Dr Robinson will confirm.

They served perfect pasta. I dreamed about the rabbit pappardelle after I had it. Oysters they brought in from — I don’t recall where — were the best I’ve eaten in KZN. Many raved about the restaurant.

But this is Durban. And after two years they closed.

They were turning a profit, Robinson says. Not enough to put his daughter through university — his yardstick quip. But more than the finance issues, “I found I didn’t have the legs anymore,” he says. Literally. “I was that much older.” All the hours of standing were wearing him out.

One good-news thing about the restaurant closure is that they moved a lot of the kitchen equipment to their house. They added more pizza nights at the bakery, so now there are five.

And they put new things on the evening menu. Like my two favourite pizzas. The classic Provençal pissalidiere, with melted onions, anchovy, parmesan and rocket. And the lahmajoun, an Armenian pizza with lamb mince, minted yoghurt and herb salad.

“Someone sent me a video of an Armenian wedding. What interested me was a pizza I spotted in the background.” Robinson researched and experimented and this is the mouthwatering result.

And then there’s my other favourite: Not a pizza, but one of their sometime specials. One that takes us back to that pig. Except in this case, it’s a Vietnamese pork salad: Crisp succulent belly of pork with Vietnamese cabbage salad. Full circle, in a sense. DM

Wanda Hennig is a food and travel writer, based in Durban, who lived and wrote from San Francisco for 20+ years. She is author of Cravings: A Zen-inspired memoir about sensual pleasures, freedom from dark places and living and eating with abandon (Say Yes Press, 2017). Reach her online via her website, Wandalust Online.