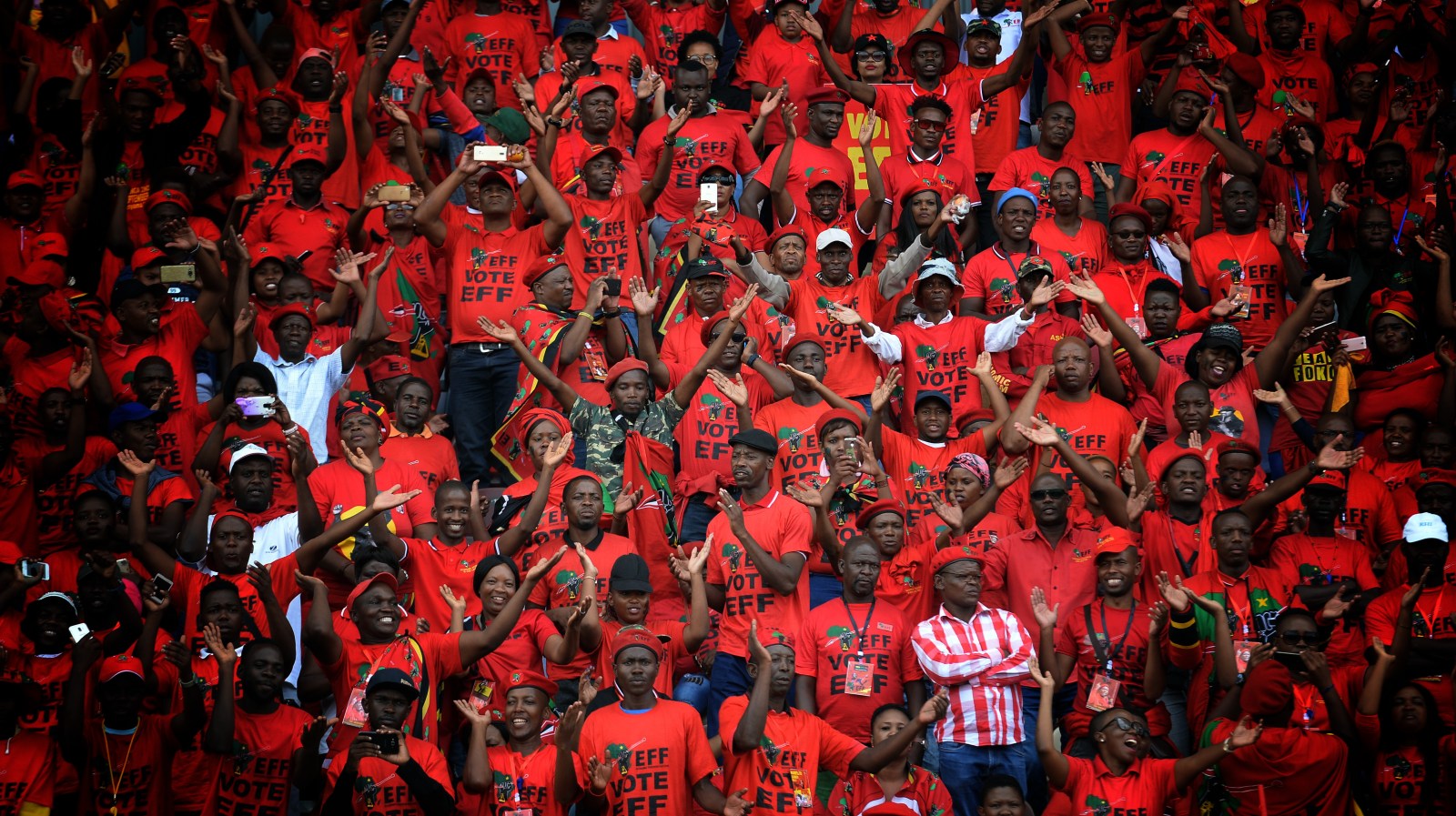 The EFF leadership and supporter base have become the country’s leading army of cyber-violence as it executes an information war, the case between the South African National Editors' Forum and the political party reveals.

South African National Editors’ Forum (SANEF) has approached the Equality Court to interdict the EFF President Julius Malema and his party from intimidating, harassing, threatening or assaulting five named journalists and any other journalist. The case is likely to be heard in March.

On Wednesday, EFF supporters advanced the war when numerous of them threatened journalist and television and radio anchor Karima Brown with rape and extreme violence via WhatsApp after Malema put her mobile phone number on Twitter, where he has a following of 2.3-million users.

For years, the EFF has used social media and its rallies to execute a campaign of violence and hate speech against journalists whose reporting it does not approve of.

Now SANEF will ask the courts to interdict the EFF from publishing personal information about journalists online; and it will ask the courts to direct Malema and the EFF to “publicly denounce the harassment and abuse of five named journalists and to call upon members and supporters of the first respondent to cease intimidating, harassing, threatening and/or assaulting any journalist, or publishing the information of any journalist”.

This is the first big test case in South Africa to challenge cyber-violence, which is now recognised by the United Nations agency UNESCO as a rising threat to media freedom. EFF’s cyber-violence and hate speech against journalists has gained global attention.

SANEF will also ask the courts to direct Malema and the EFF to apologise to the five complainant journalists and to all journalists in general for the threatening statements that have been made, coupled with a recognition by the respondents of the constitutionally protected role played by journalists in our society.

The journalists were warned by the EFF and its supporters that their conduct (that is, their journalism) was a declaration of war; that supporters of the respondents were “coming for” them, while some were warned that it was “time to deal with” their types of journalists.

SANEF chairperson Mahlatse Mahlase will tell the courts about a campaign of insults by the EFF members and their cyber troops. These insults include the journalists being called the “Indian cabal” related to their ethnicity; “Stratcom” journalists inferring that they had operated in support of the apartheid state before 1994 and now have a nefarious agenda; “bloody racists”; “Satan”; “racist things” and “rubbish journalists”.

“The conduct of the respondents in making inflammatory utterances and failing to condemn the resultant attacks on journalists has created an environment enabling the abuse, intimidation and harassment of journalists.  This has had, and will continue to have, a widespread and damaging effect on journalists in general, the particular journalists who have been named by the respondents and the media in general,” says Mahlase in her affidavit to the court.

She continues: “The conduct of the respondents and the resultant attacks on journalists has already had a negative effect on journalists generally. It has also had a chilling effect on reportage in respect of the respondents. Journalists are choosing not to report critically on the EFF, because they are aware they may be subjected to personal attacks and fear for the safety of themselves and their families.”

The court will hear how online violence has had real-world impacts. Munusamy and Du Preez will detail to the court how they experienced physical harassment in public after being subject to the EFF’s cyber-violence.

“I attended the Zondo commission hearings on Wednesday 21 November 2018. I left after lunch. While I was waiting for my Uber driver to collect me (right next to the BP garage), some of the EFF protesters walked by. One of them recognised me and shouted my name. About a dozen of the protesters then mobbed me, shouting threats and abuse at me. One threat I remember was ‘You’re not safe on these streets, you white bastard’. I was distressed by the incident and feared for my safety,” said Du Preez.

Reporters without Borders is an international NGO which works to protect media freedom. Last year, it condemned Malema’s use of threats and insults against journalists. RSF states that “inciting hatred against journalists is unworthy of a political leader, and irresponsible because it encourages actual physical violence”.

Advocate Danny Berger arguing on behalf of SANEF will tell the court:

“The conduct of the respondents (the EFF) constitutes hate speech under the Promotion of Equality and Prevention of Unfair Discrimination Act. It also constitutes an unjustified violation of Section 16 of the Constitution which protects freedom of expression, and of the press and other media.”

On November 20, 2018, outside the Zondo commission of inquiry offices in Parktown, Johannesburg, Malema said:

“Let’s attack, fighters. Let’s occupy every street; every house; every space in society. Let us not leave the enemy to chance. Where we meet the enemy, we must crush the enemy. On Facebook, Twitter, social media, be there, guard the revolution. When the enemy raises its ugly head, don’t hit the head, cut the head. No time to entertain enemies of the revolution. We must protect the revolution at all costs.”

“These statements clearly constitute hate speech and incitement to violence against the respondents’ perceived enemies, including the members of the media,” Berger will argue.

“Peter Bruce, Max du Preez, there is Ferial Haffajee, there is Ranjeni Munusamy, there is another one from Cape Town called Palesa Morudu, there’s another called, this one that was the CEO of the Gender Commission, Nomboniso Gasa, and the husband, and that Pierre de Vos – that’s the Ramaphosa defence force… You must write them down, everywhere you see their names, attend to them decisively. You must attend to them decisively.”

SANEF says this amounts to an incitement to violence which Malema then moderated as his supporters began threatening the journalists who were at the party rally.

“These statements clearly constitute hate speech and incitement to violence against the respondent’s perceived enemies, including the members of the media.”

The case is the first significant fight against a cyber war as SANEF points out the amplifying impacts on social media on hate speech: Malema’s statements were tweeted by the account @EFFSouthAfrica to a wider audience of more than 660,000 followers.

“Twitter users purporting to be supporters of the respondents launched a sustained and targeted attack against the journalists mentioned by the second respondent, as a direct result of and in response to his utterances.

“A barrage of online harassment, abuse, threats, and intimidation has been directed at the complainants, the other journalists named by the second respondent, other individuals in the media, as well as the media in general.”

Supporters of the EFF then interpreted their mandate from Malema as a “mandate” to “deal with them (journalists) decisively until they become carcasses in their brains”. The court papers detail pages and pages of violent threats. In another tweet, EFF supporters said so-called “propaganda media houses” where the applicants are employed “must be burnt down”.

Journalists will have a “definition of violence” if they continue to “misbehave and provoke” EFF supporters.

The EFF has turned South Africa into its empire of impunity: while SANEF tried to engage the party, it refused to meet. The court papers note: “The second respondent was made aware of the harassment of the aforementioned journalists and stated in a tweet that such attacks would not end unless the (so-called) Ramaphosa defence force started acting professionally.”

EFF deputy president Floyd Shivambu, who attacked photo-journalist Adrian de Kock in broad daylight at Parliament a year ago and has yet to be questioned by the police, targeted Van Wyk and Basson and perpetuated further harassment at them.

Van Wyk will tell the court:

“Since the publication of my articles (on the EFF’s implication in the looting of the VBS bank), I have been subjected to a torrent of abuse and insults from EFF leadership and supporters. Much of the abuse constitutes hate speech.”

Basson will tell the court that he has been dehumanised by EFF supporters and called a “racist Afrikaner boy”, a “bitch”, a “racist Nazi” and a “bastard”. Another Twitter user, in response to a video posted on Twitter that purported to show members of the EFF assaulting a person, wrote: “I hope you are watching. We have no time for racist scumbags and settlers.”

Basson has laid a charge against an EFF supporter on Twitter who goes by the handle of @tsk_tsheko and who posted on Twitter that the editor should be killed. At the time of writing, the police could report no progress on his case.

Berger will tell the court that Malema and his cyber army’s campaign will have consequences.

“It is clear that Mr Malema’s statements are creating an enabling environment for his and the EFF’s supporters to threaten, intimidate and even physically assault journalists. His influence is evidenced by the fact that his supporters are using exactly the same language that he uses against journalists.”

Munusamy, Van Wyk and Bateman will detail how the EFF’s violent campaign has impacted on how they work, how cautiously they move and on how they fear for their own lives and in Bateman’s case, for that of his wife and children.

The EFF is yet to file responding papers. DM